We certainly had weather yesterday.  What a day…  In the end, there was so  much going on that I had 283 photographs after the failed ones had been deleted (a typical day is around 60-100 photographs in total).  No sooner had the camera been put away in its bag than something else totally unexpected appeared.  That said, by far the most spectacular thing of the day proved impossible to capture on camera…  (as usual, click on images to see larger versions).

Things started fairly quietly on the way down to the station with a greenfinch rasping and whistling on a TV aerial – and looking very much like an ‘Angry Bird’.  I hand-reared one when I was at school.  it was called Scruffy and lived in my bedroom when it wasn’t out teasing the local cats: 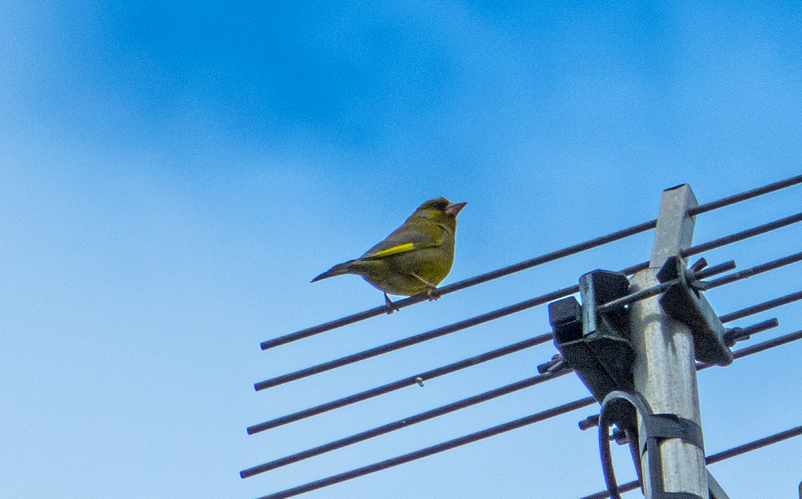 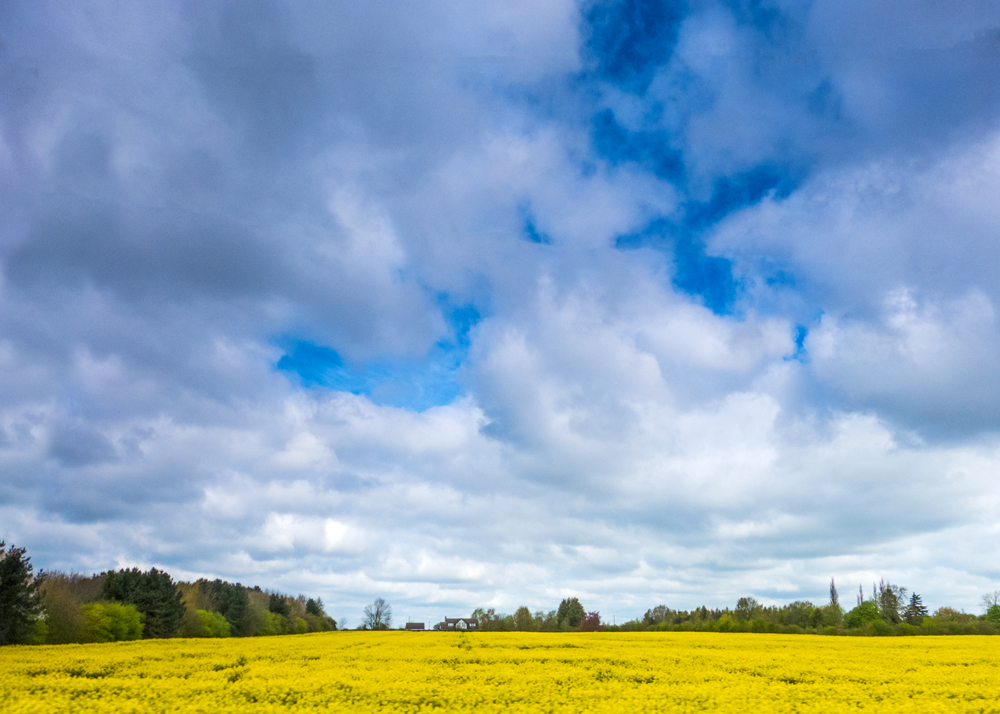 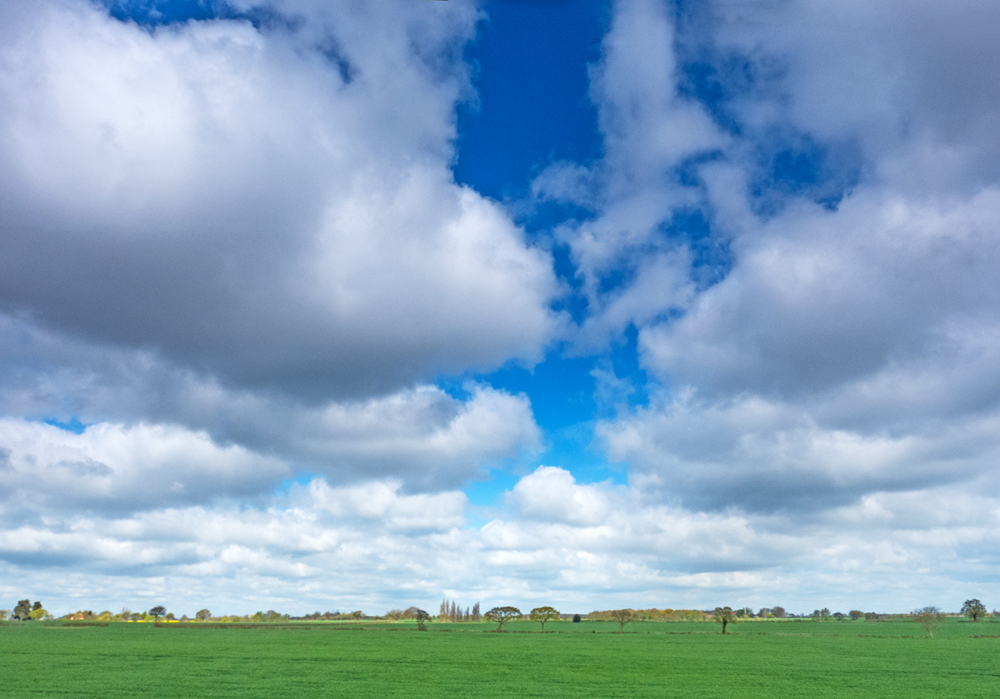 However, a big bank of cumulus congestus approaching the fields just east of Chelmsford, then thickening into fat rows of cumulus mediocris over New Hall School, Chelmsford, suggested that there was a fair amount of energy in the lower atmosphere (and energy often means trouble): 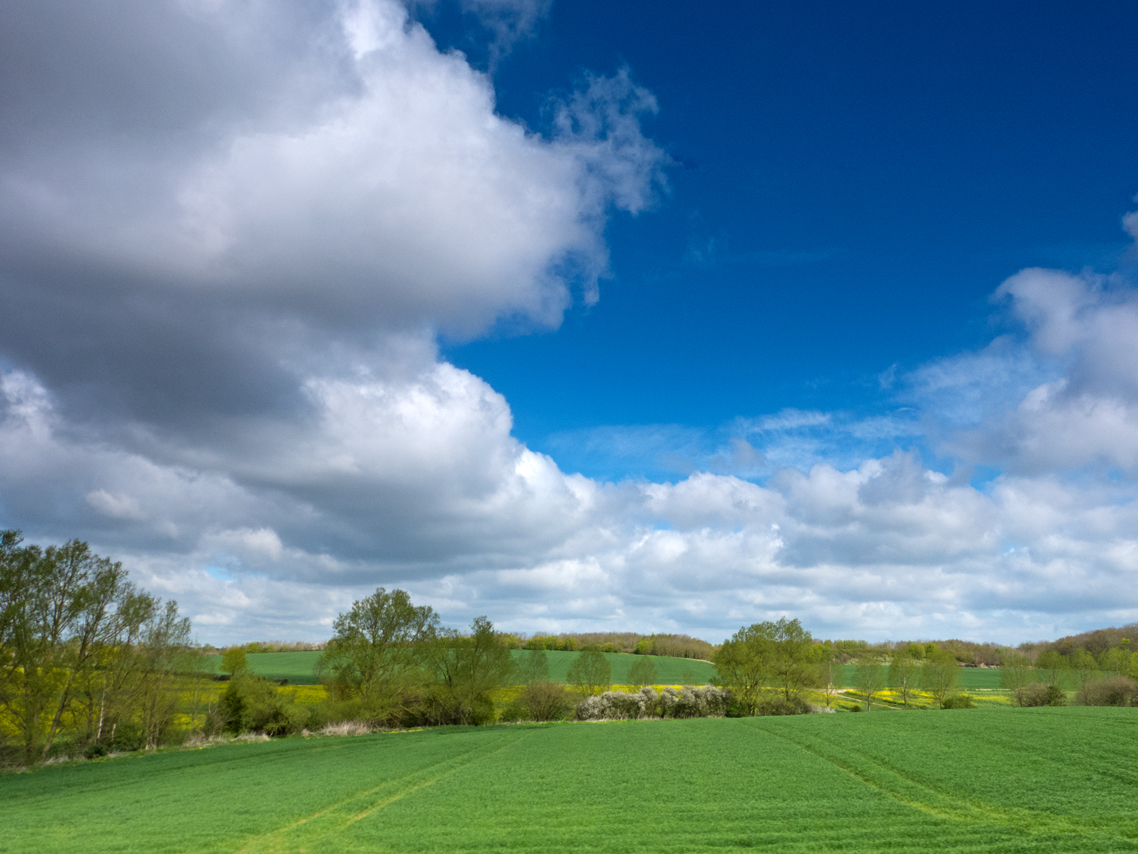 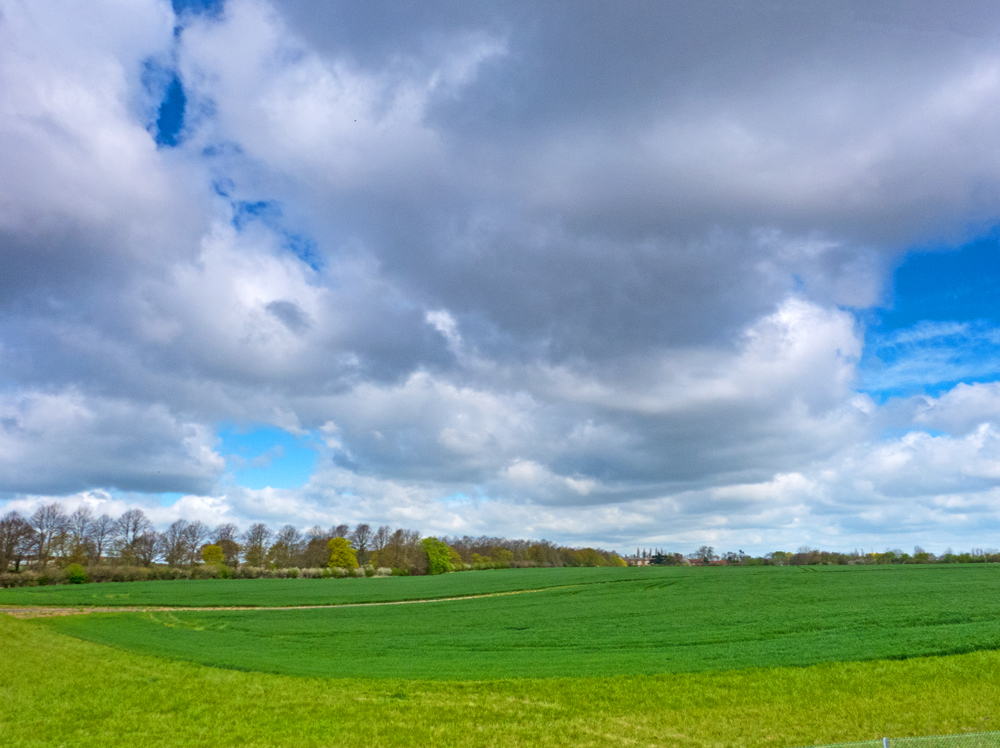 A brief respite and more blue over the poplar fields near Ingatestone hinted at clearing skies: 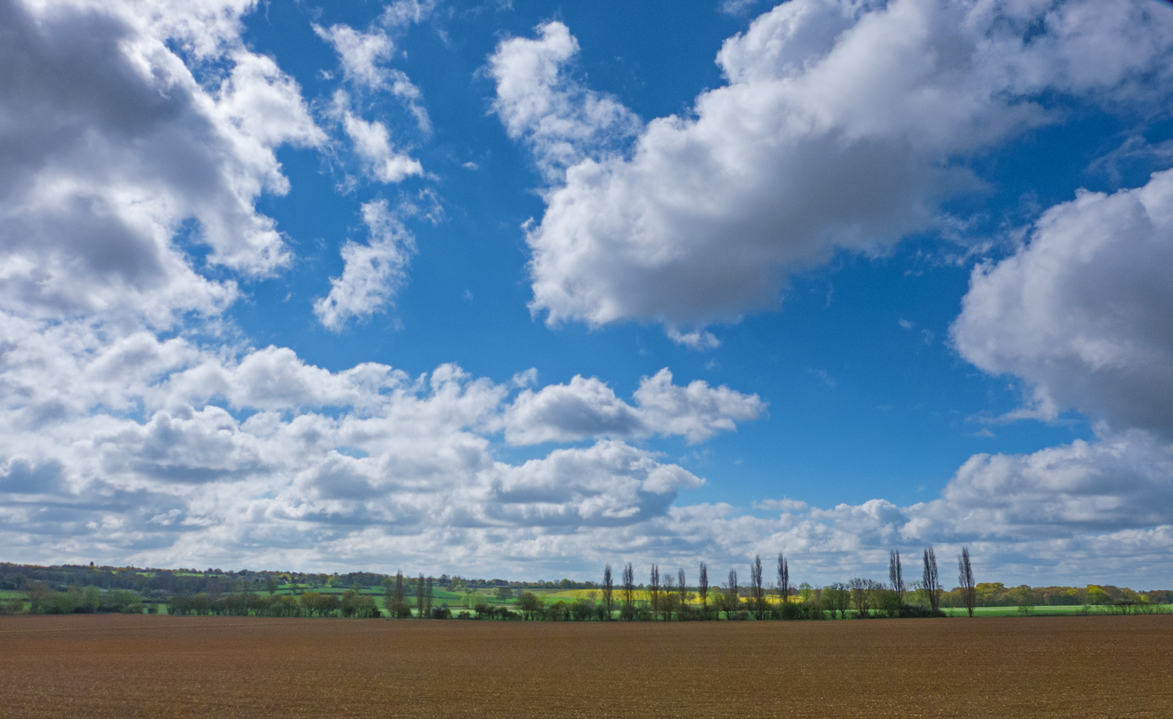 But by the Lone Oak east of Shenfield the cumulus was becoming congested again: 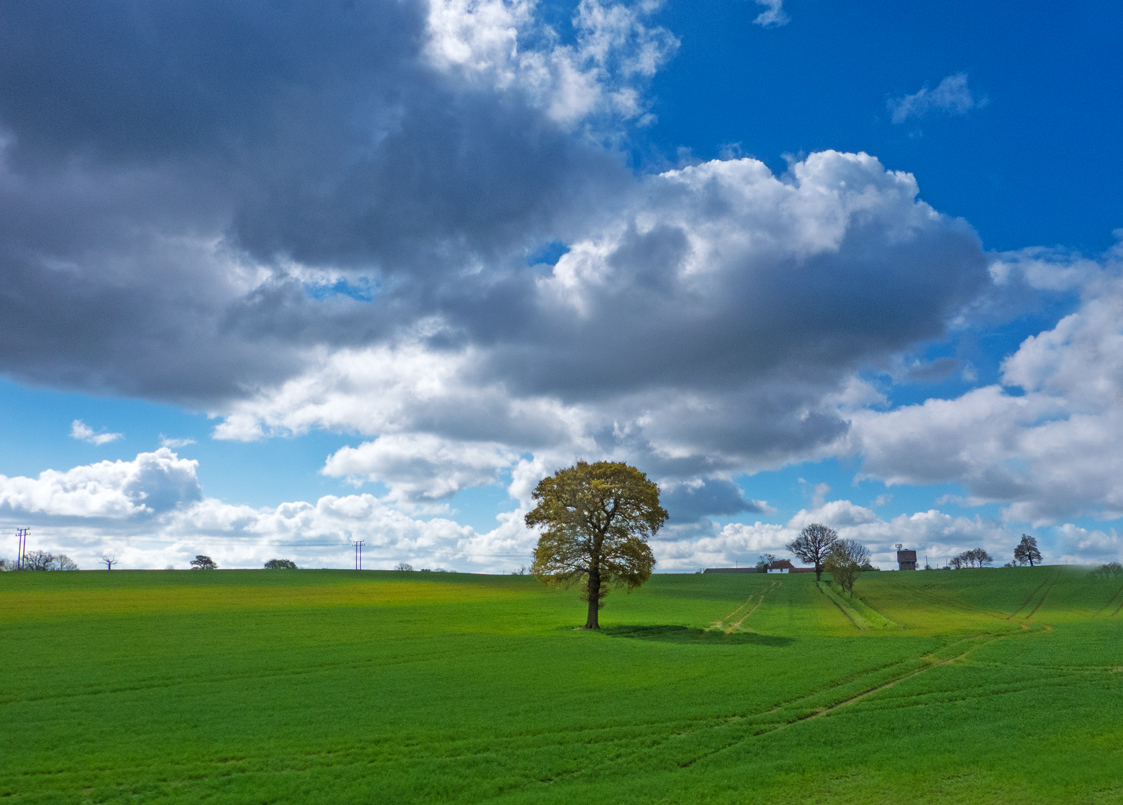 By Stratford, things were starting to become interesting, with signs of cumulonimbus calvus developing (and cumulonimbus is a signal to check for your umbrella): 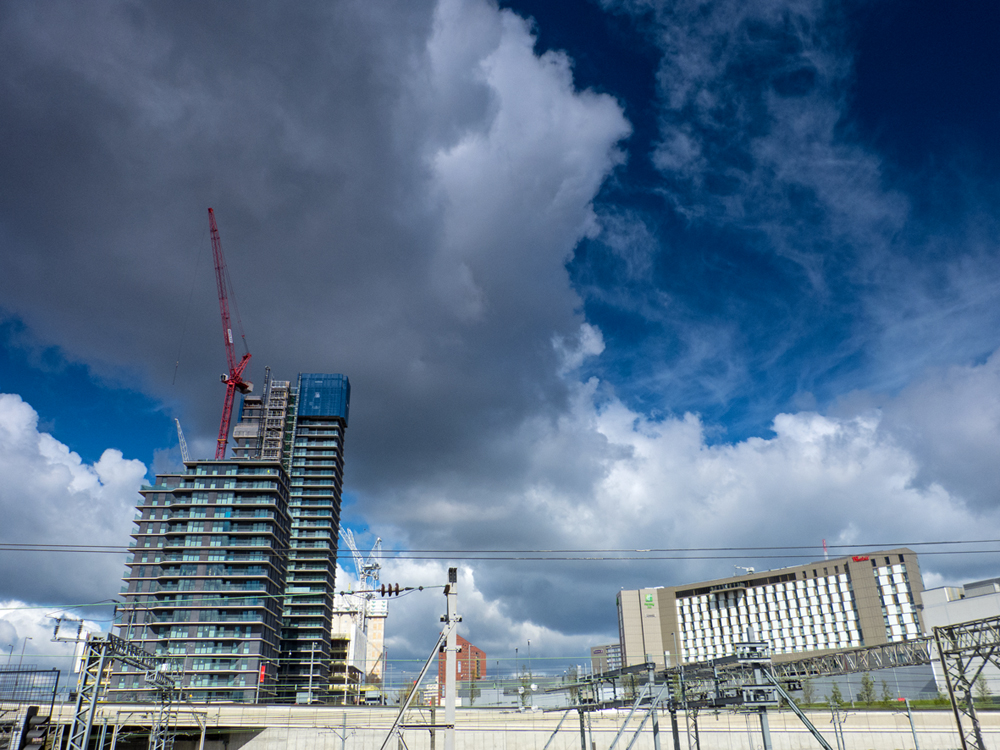 By the time I arrived at Galleon’s Reach DLR station the view westwards to Canary Wharf was becoming decidedly chaotic: 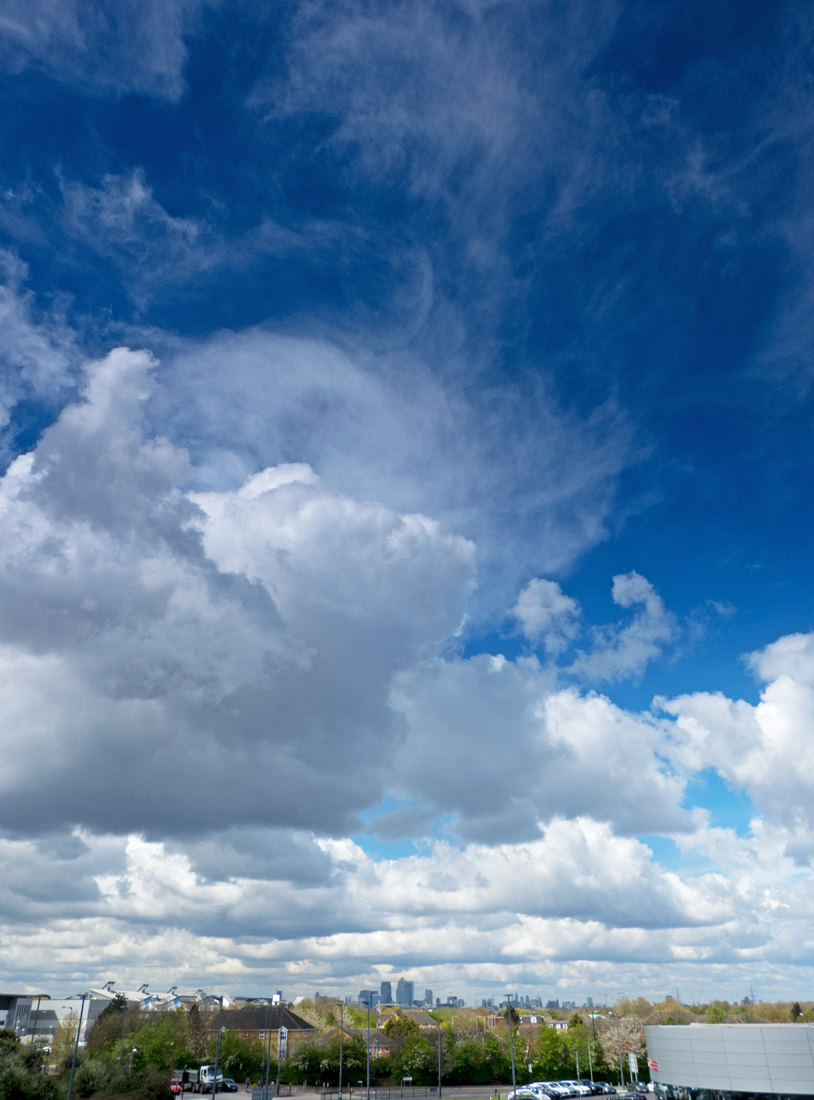 Then it became that classic spring weather – ‘sunshine and showers’, with one particular bank of cumulonimbus capillatus apparently stuck on the western edge of Shooters’ Hill, which sits across the Royal Albert Dock and the Thames from the University of East London Docklands Campus: 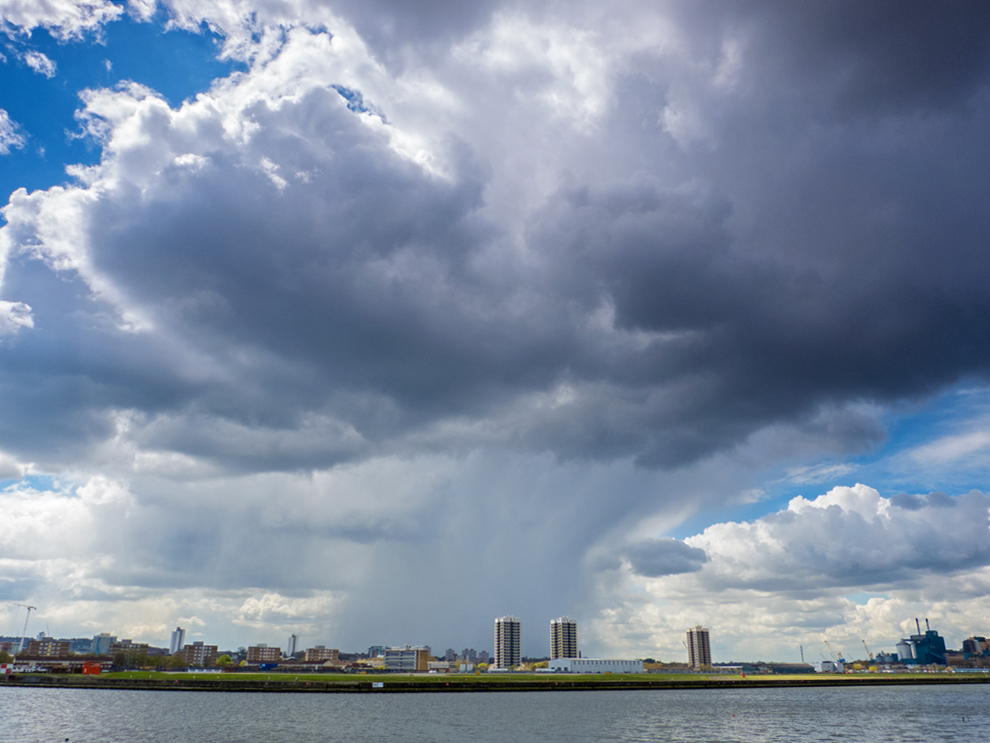 The showers were mostly rain, sleet and hailstones and the towering cumulonimbus capillatus was indeed towering: 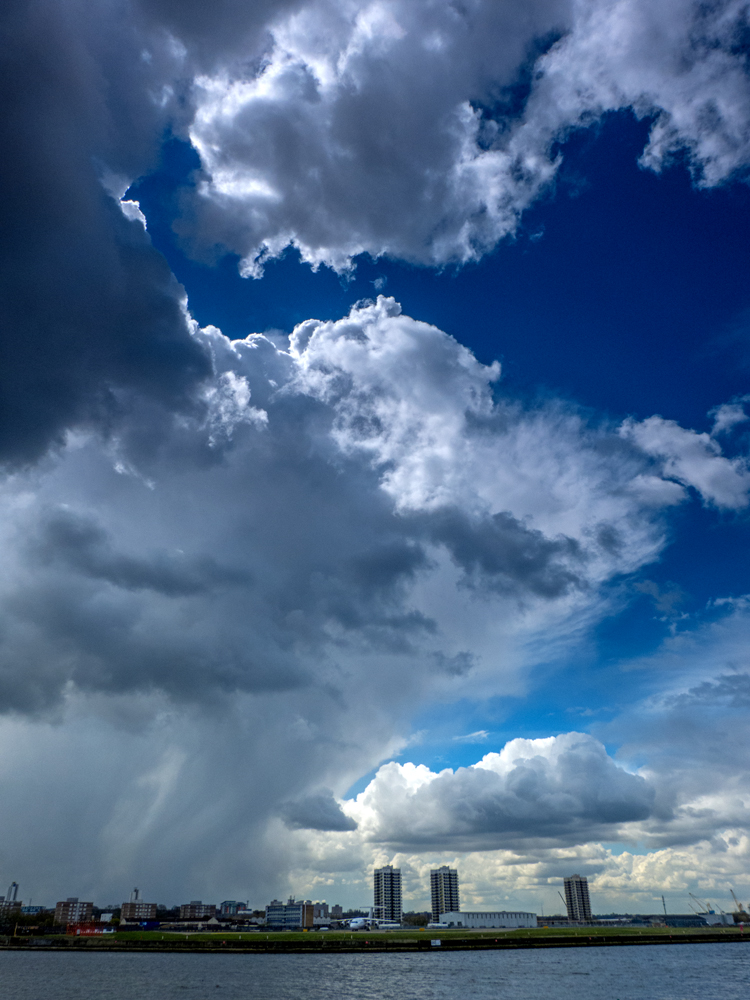 Meanwhile the planes continued to land and take off from London City Airport: 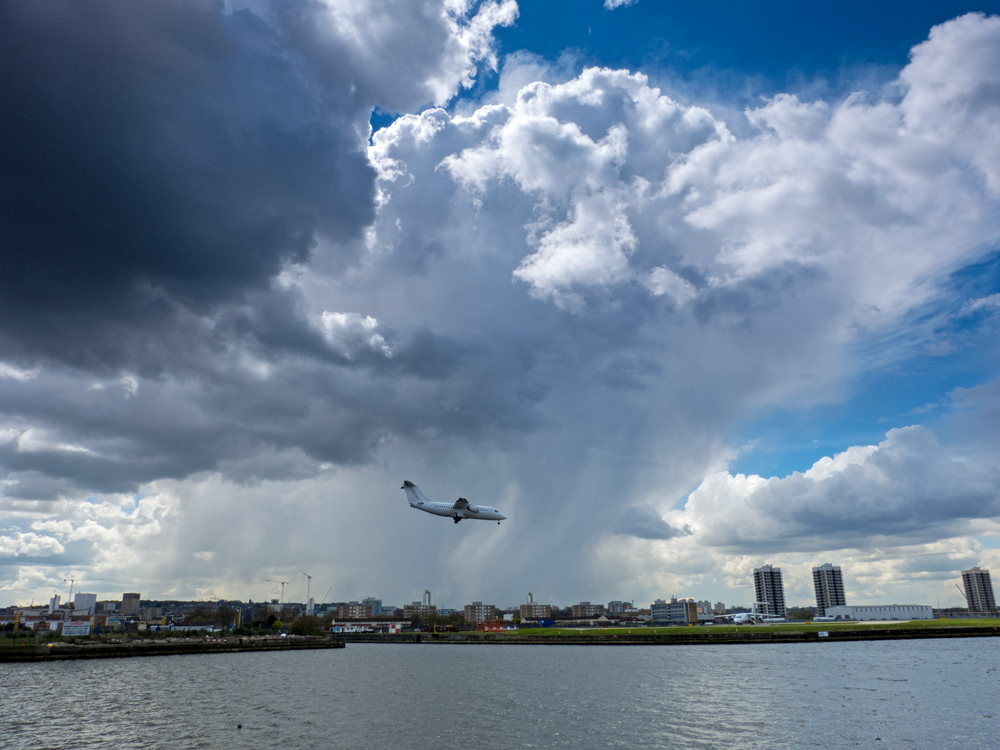 …while above them the planes to Heathrow were heading into the midst of a great bank of cloud drenching Canary Wharf: 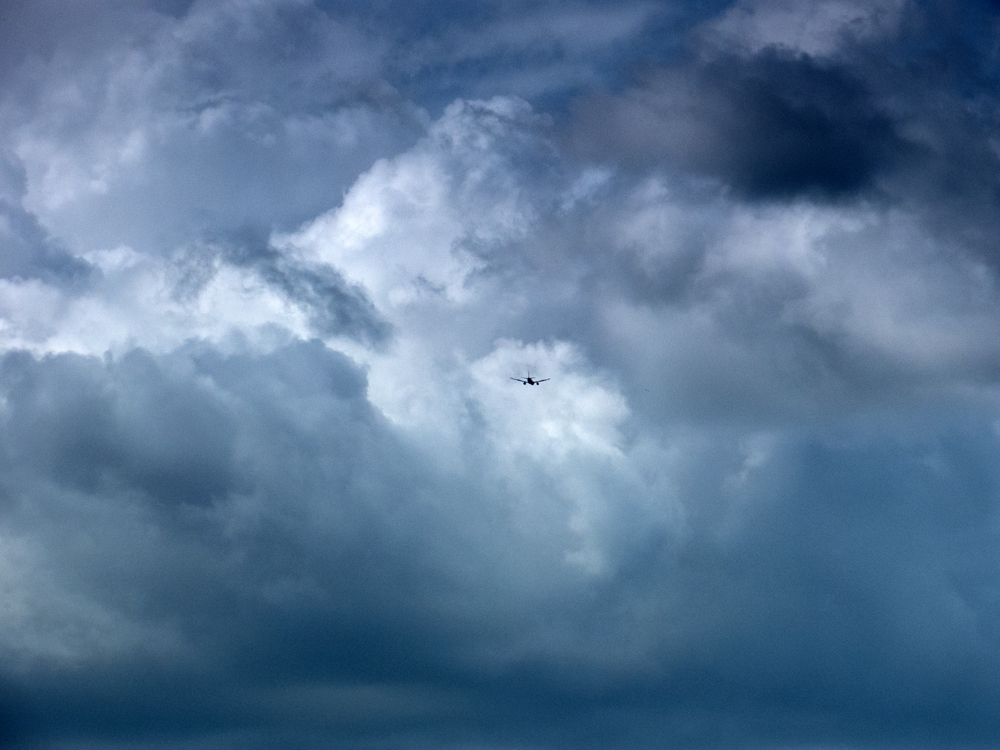 Suddenly it was very dark and it started snowing outside – yes, blizzard snowing – for at least 2 minutes. As the light returned I grabbed my camera to see what had caused winter to return. The view from Galleon’s Reach DLR Station seemed almost apocalyptic:

Trotting down to the Thames at Galleon’s Reach an hour or so later at the end of the day, I had another blizzard, but this time of goldfinches, diving in and out of the buddleia and fence netting: 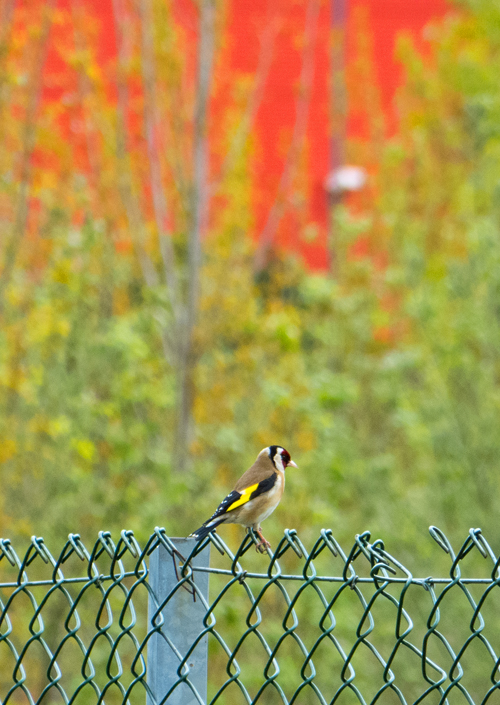 To the north, a huge cumulonimbus capillatus anvil was drifting eastwards towards Barking and Dagenham, and planes heading east from London City Airport were doing their best to avoid it. The view from the plane must have been extraordinary: 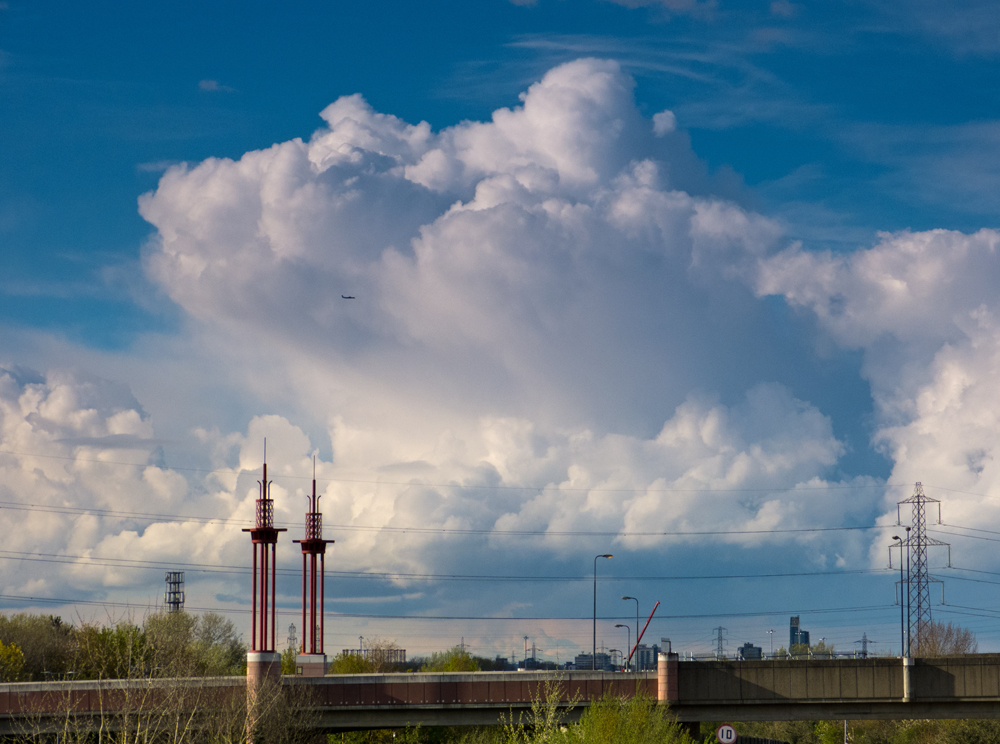 Then a kestrel flew overhead, squealing with indignation because it was being chased by a couple of crows: 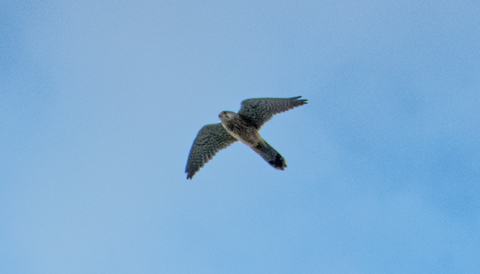 Arriving down at the Thames at Galleon’s Reach, I could see the monster that had turned our day into night and our spring into winter, drifting eastwards towards Dartford:

Planes coming in to land at London City Airport were having to fly round, over, or even in some cases through this monster, and the scenes out of the windows from these planes must have been incredible – or incredibly terrifying: 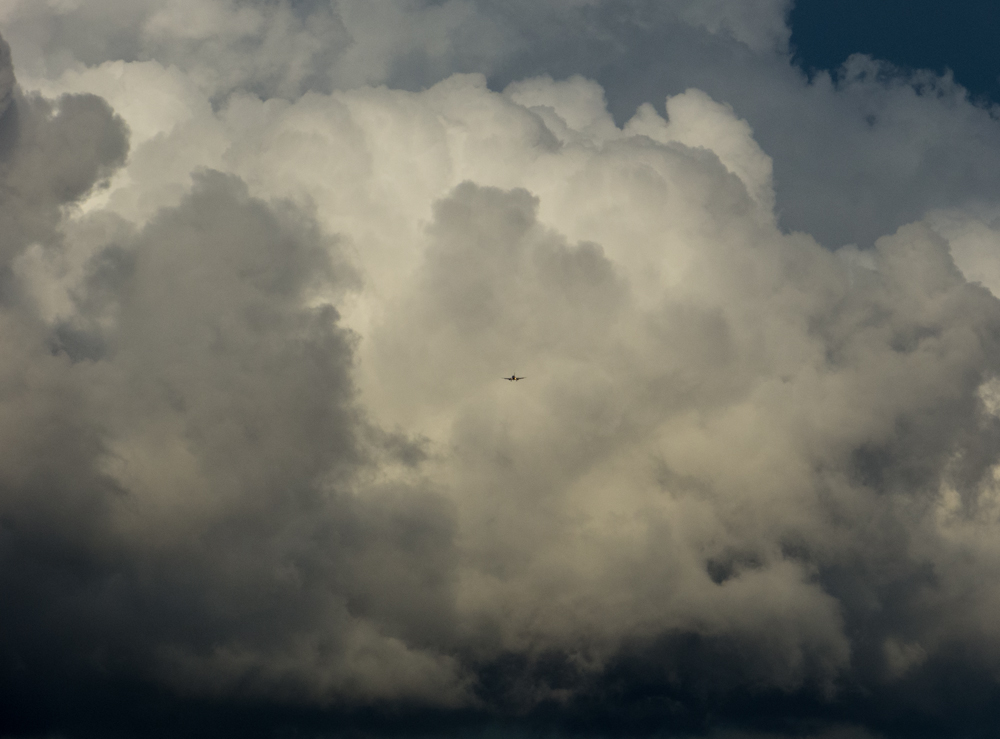 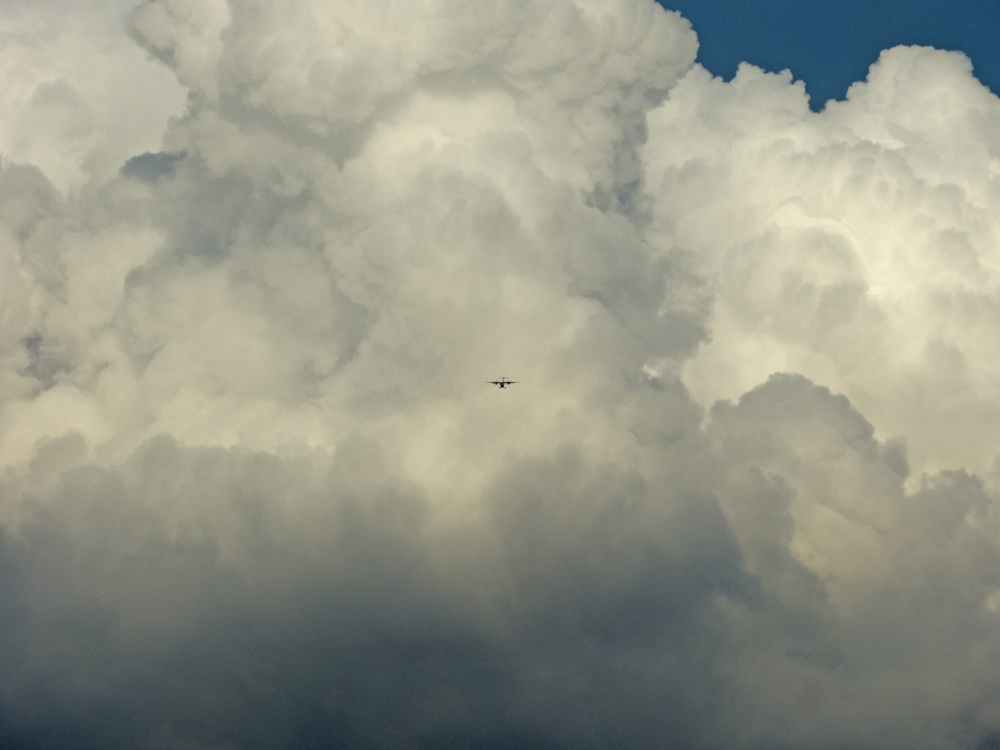 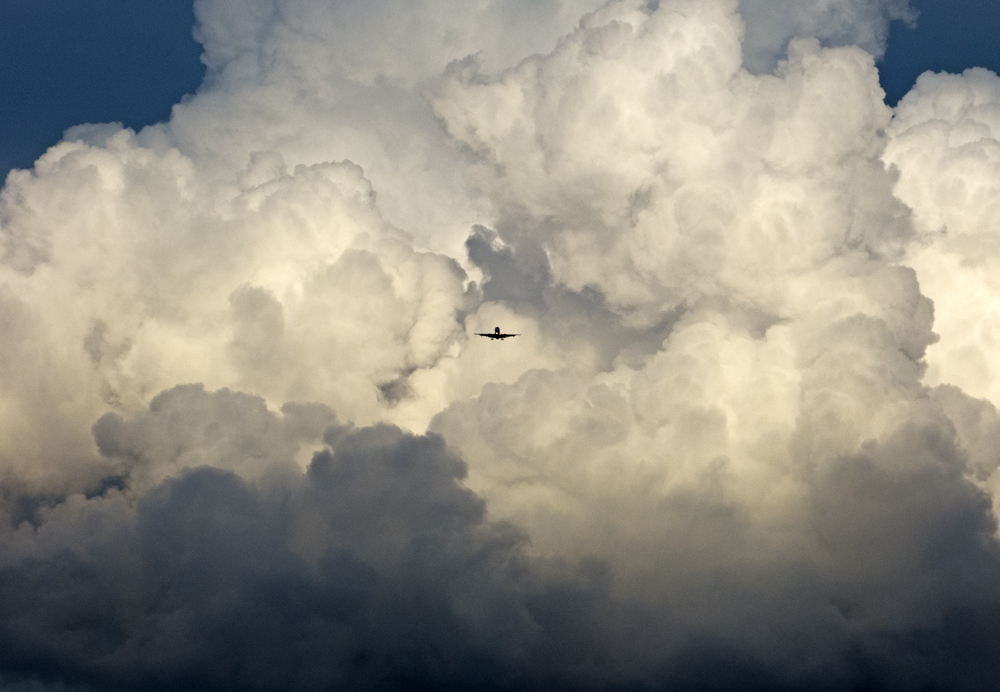 They weren’t the only things coming into land. A shellduck flew past and plonked down onto the Thames in a flurry of wings:

Meanwhile the towers of cumulus and cumulonimbus continued to dump rain, hail, sleet or snow on random parts of the landscape: 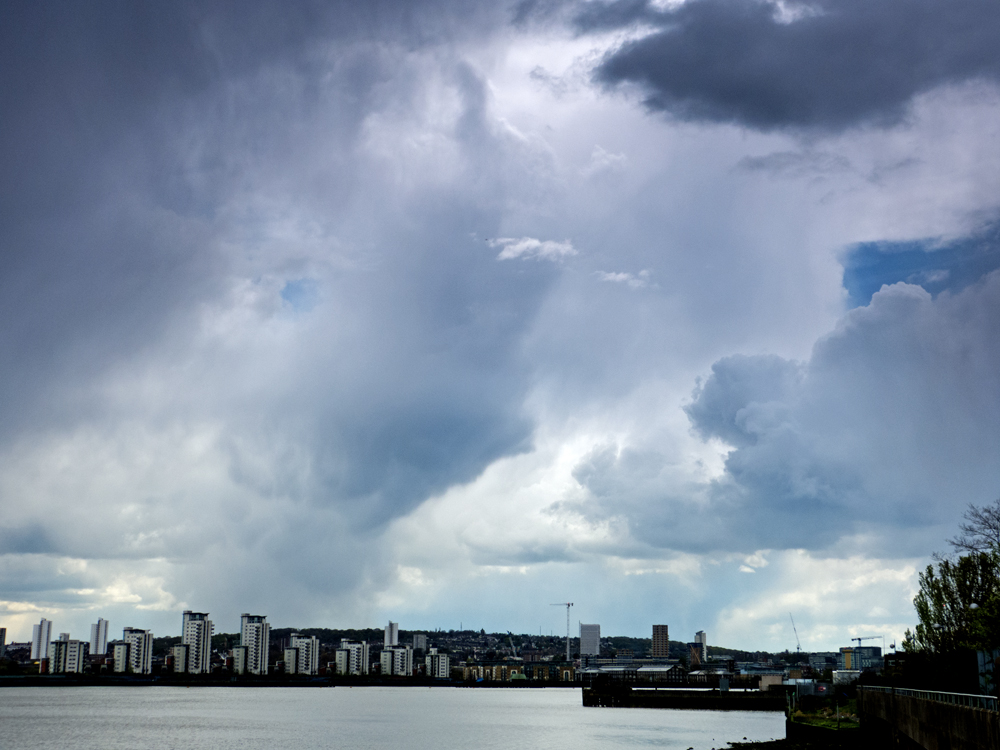 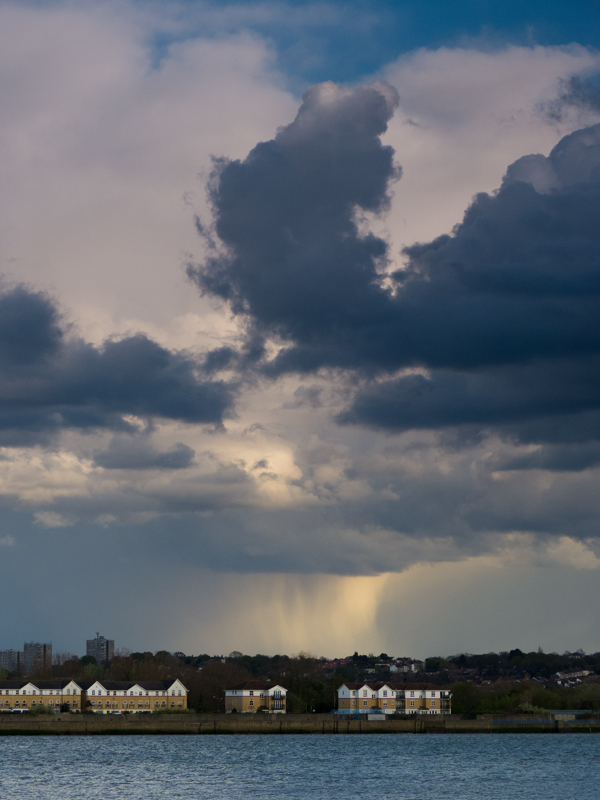 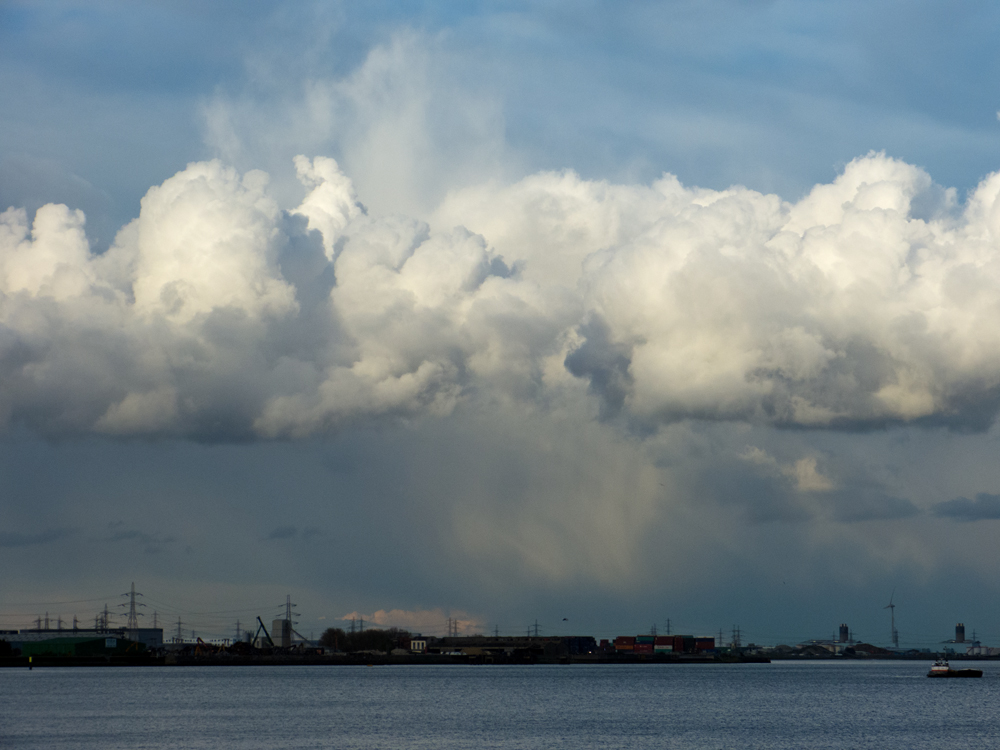 Still the planes struggled into London City Airport through it all: 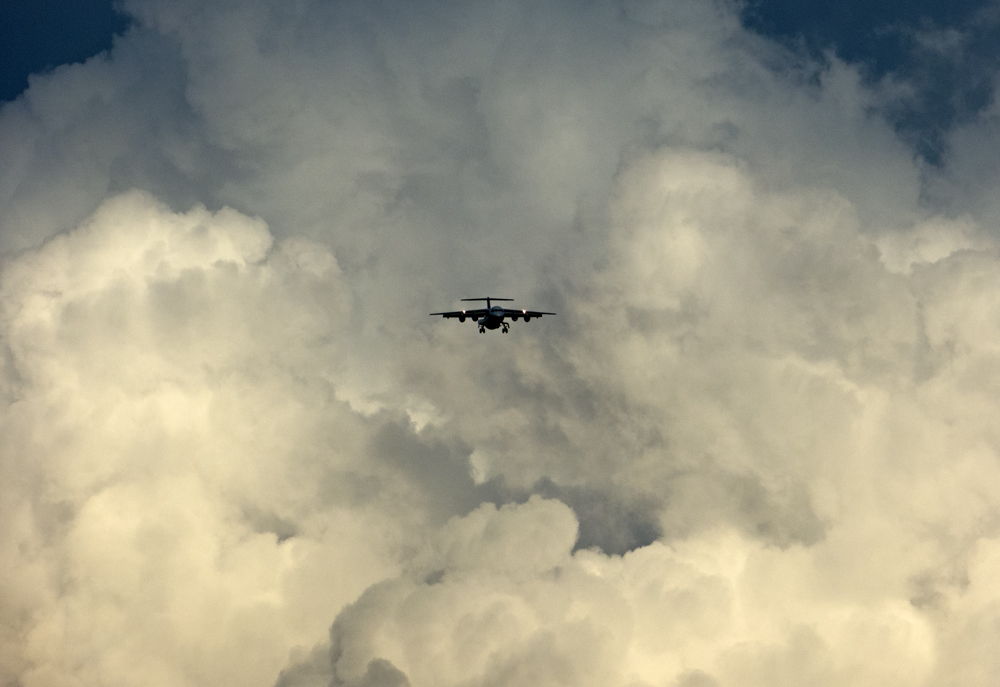 Finally heading to Galleon’s Reach DLR and home, and having put the camera away, an angry altercation between a heron and a crow (they’re a rough lot, the crows of Beckton) above the station had me scrabbling for the camera again:

Finally on the train back to Colchester from Stratford, the most enormous cumulonimbus capillatus turned a stunningly beautiful peach colour, lit up by the rays of the setting sun as we emptied passengers out at Chelmsford, but the train then immediately headed straight towards this huge cloud so it was impossible to photograph. All that was visible was the northern margin of it, and my usual tricks with lens shades couldn’t stop the reflections of the carriage lights, so here’s the result (of just a small portion of that beautiful cloud) without all the tricks of the trade: 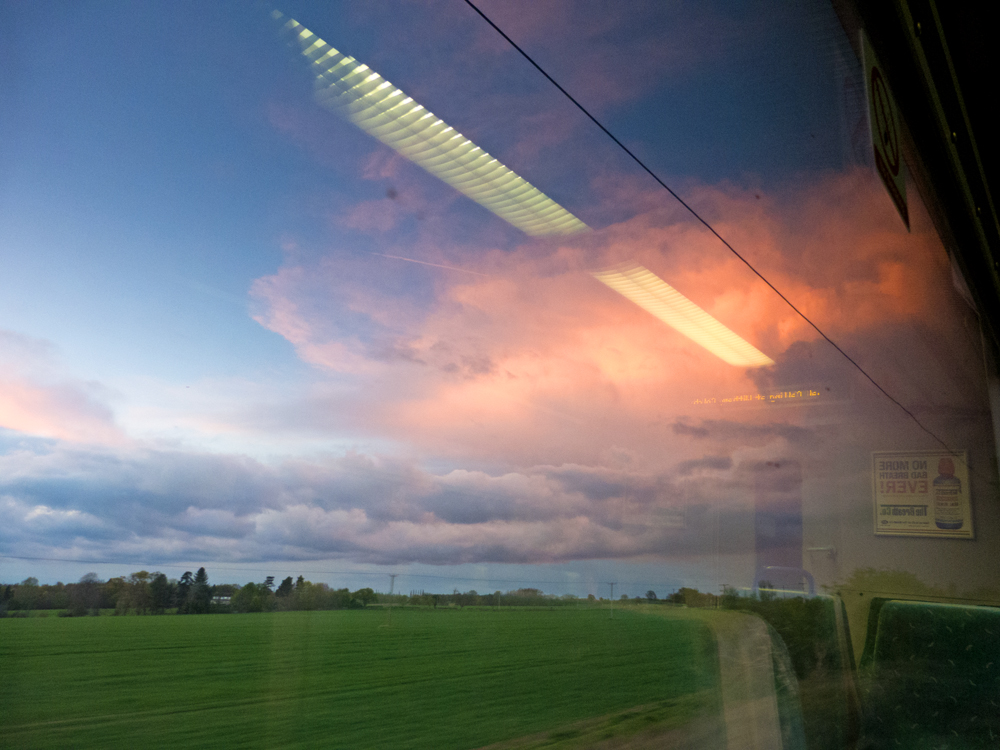 Passing under that cloud and on to Colchester, there was just enough light to catch the sunset over oil-seed rape fields at Marks Tay: