Let’s begin with a serene sunset over Royal Albert Dock, as seen the other evening as I was walking along the university campus to Gallions Reach DLR Station: 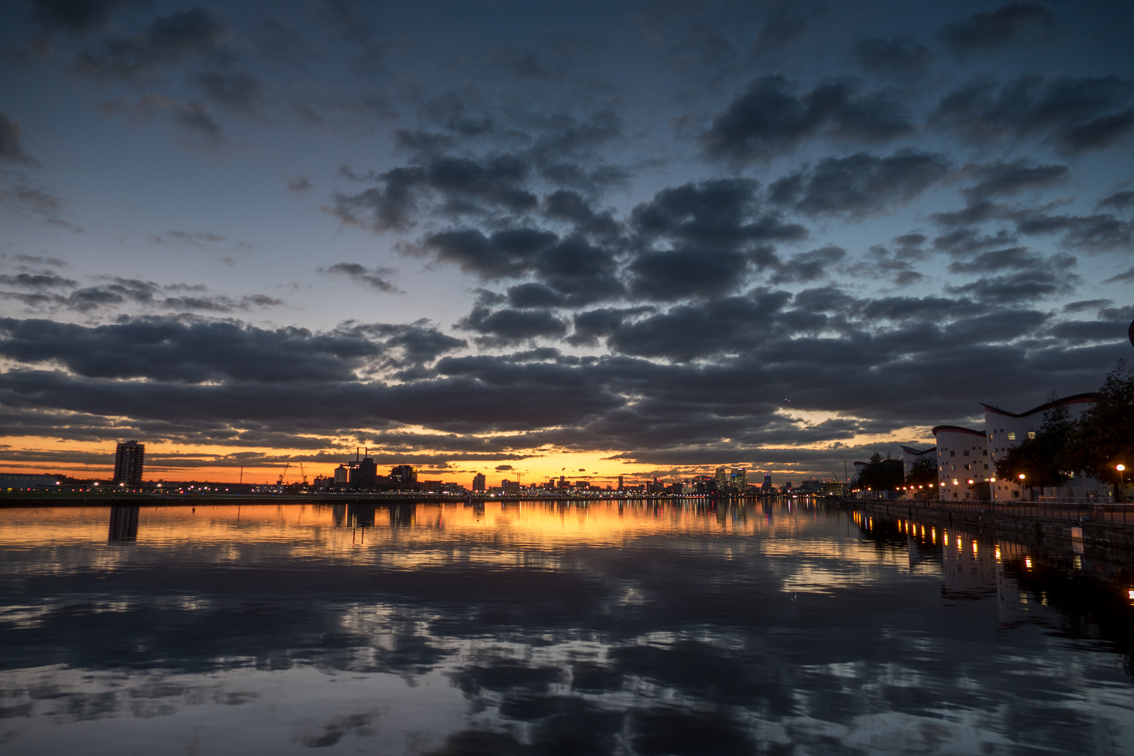 Earlier, the day had been warm and sunny with rowers out on the dock enjoying Canary Wharf as the backdrop: 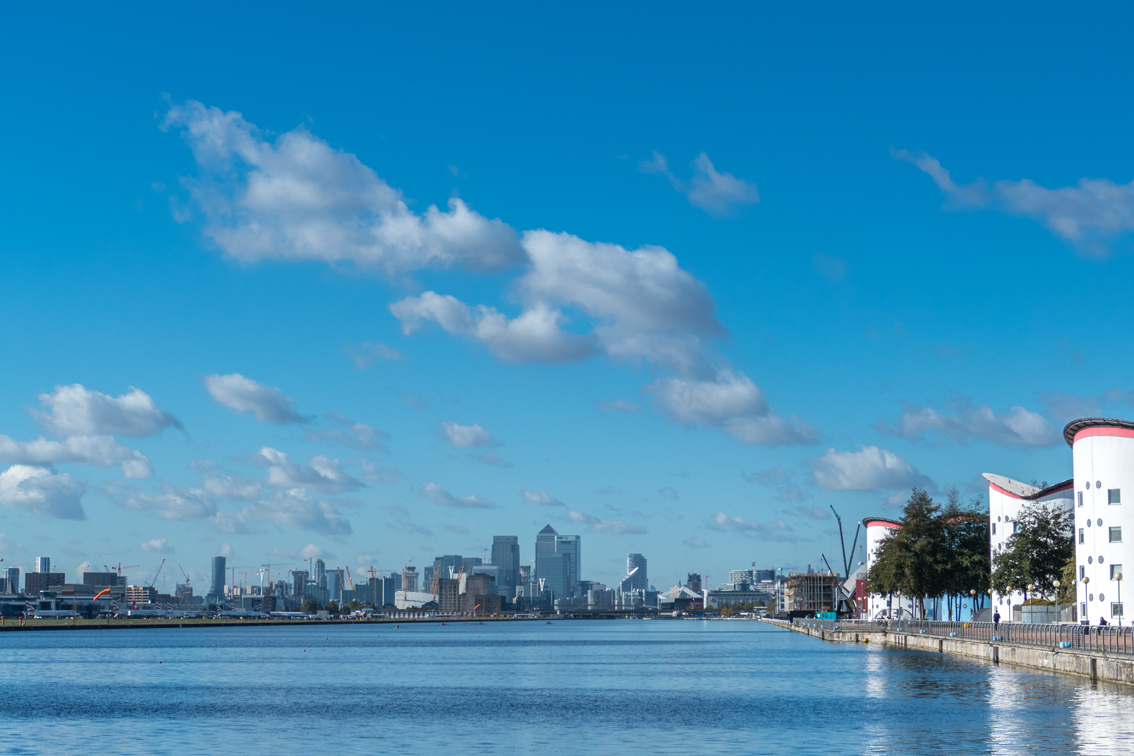 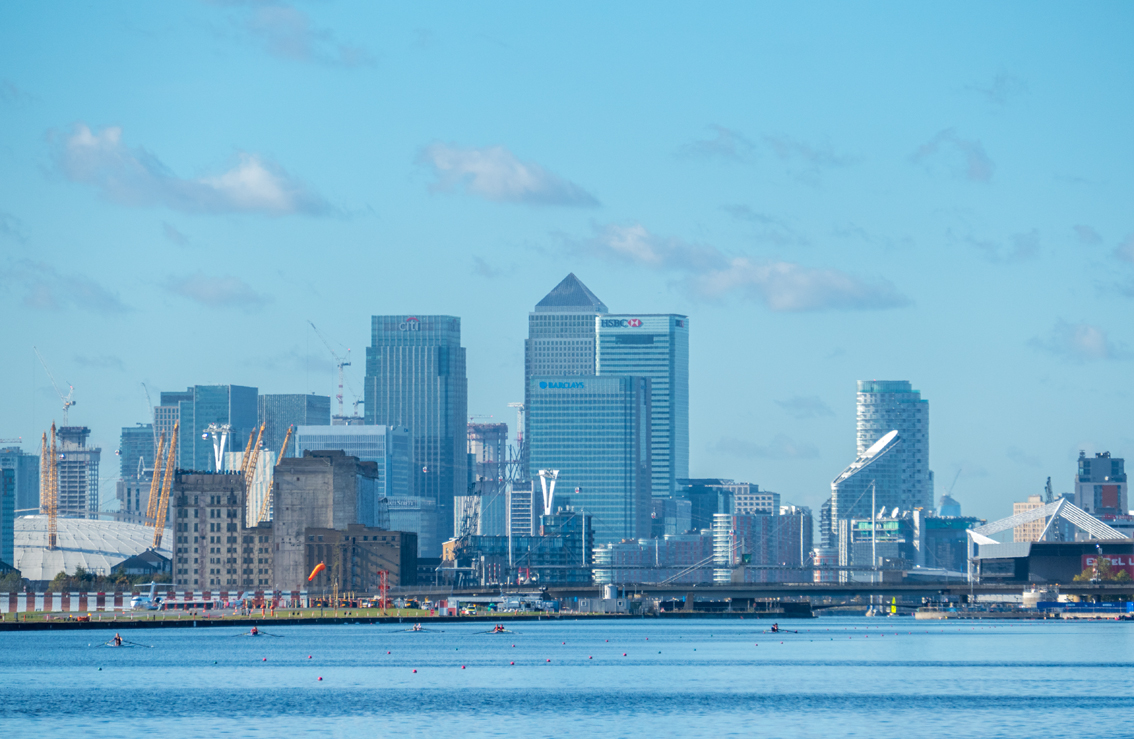 And the evening view from Gallions Reach DLR towards Canary Wharf, with the new Porsche Showroom glowing in the darkness (Oh how the wilderness of far East London has come up!), for a change gave no sign of any threatening weather on the way: 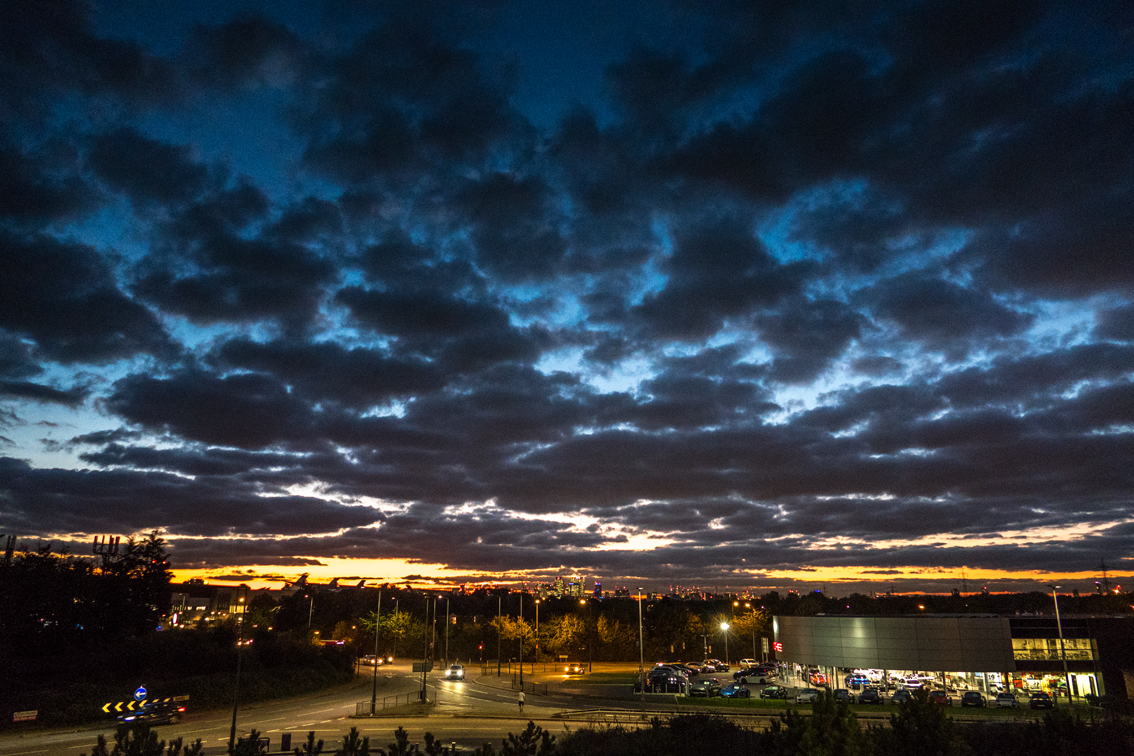 …and indeed today has been breezy but nothing worse than that, and the somewhat broken cloud towards evening suggested that a good sunset might be on the cards so I jumped onto the bike (now named ‘Monty’ according to my daughter) and headed off into the Myland fields. Things did indeed look promising: 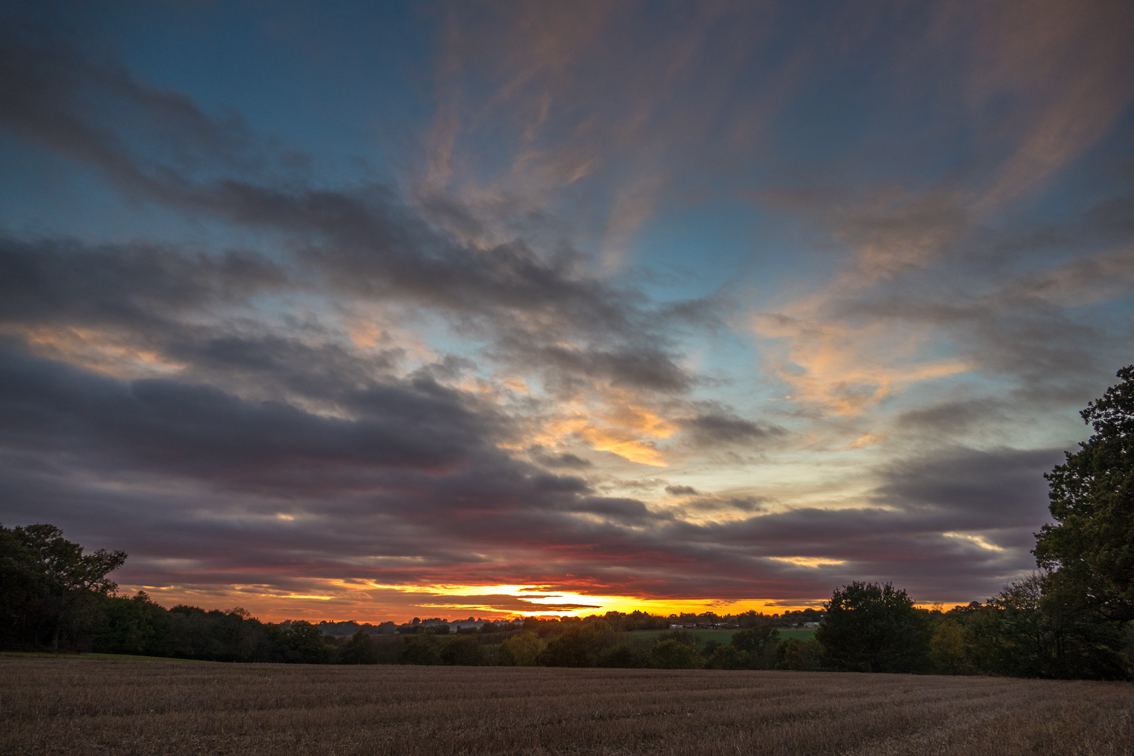 Sitting on my little folding stool and watching things develop, the thick rows of cumulus mediocris blowing out of the west suddenly thinned to reveal an extraordinary display of golden cirrocumulus high above the darker cloud streets: 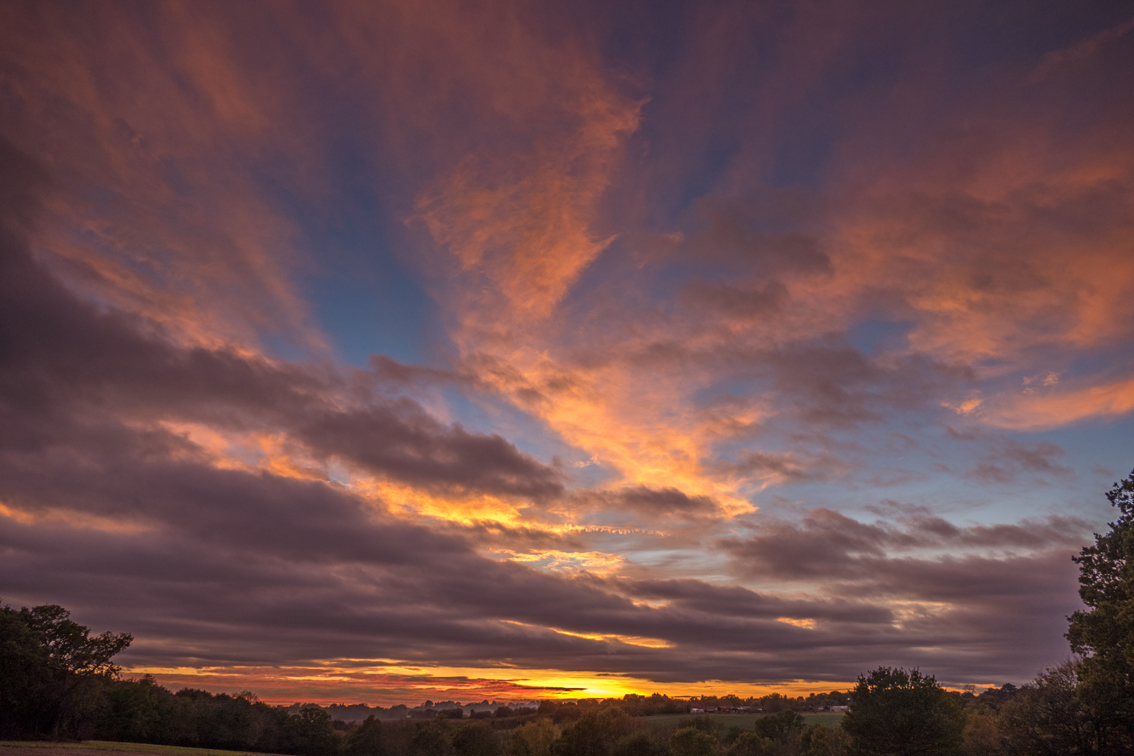 As the lower clouds moved off east, the sky above took on an appearance even more spectacular than a display of northern lights (which I’ve seen a couple of times in the far north of Scotland), with rose-gold clouds spreading across the entire bowl of a dark blue sky: 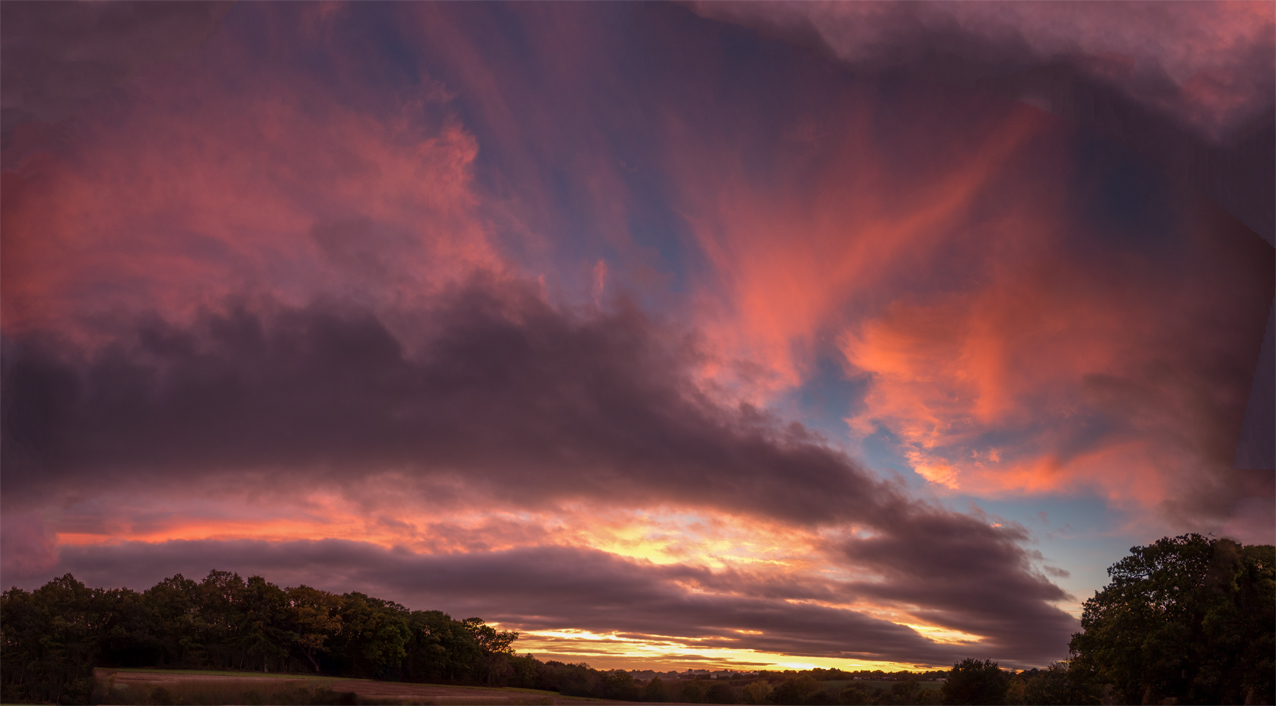 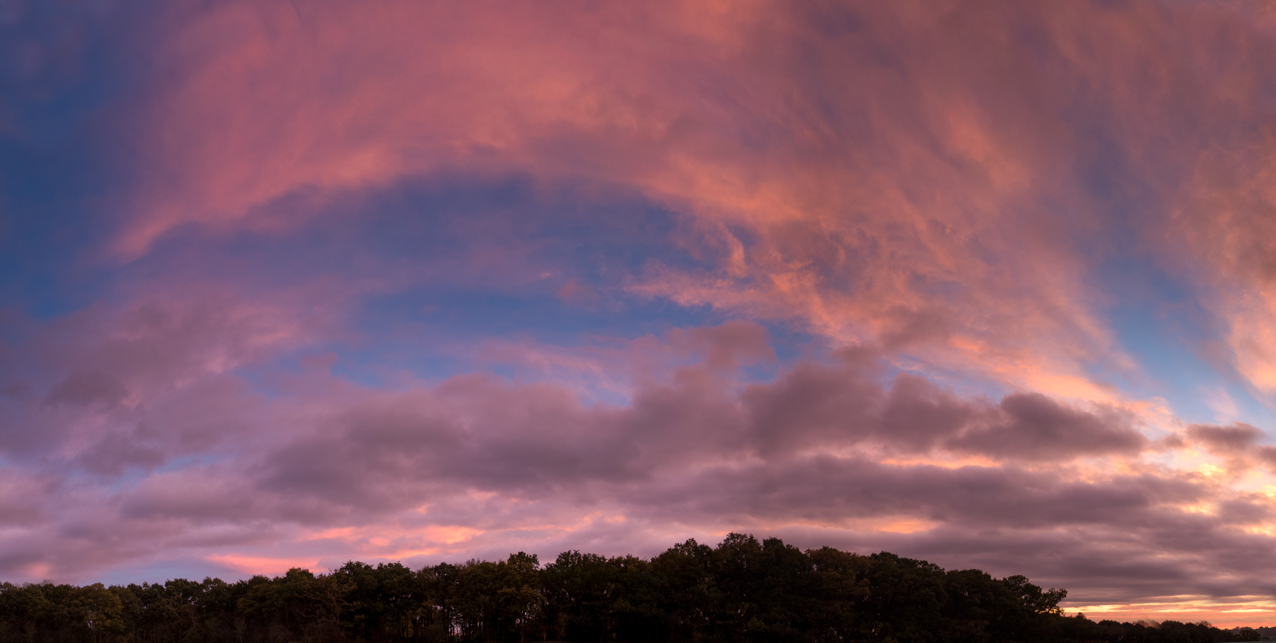 Then just as abruptly, banks of low cumulus blew in over the western horizon and it felt as though the night switch had been thrown: 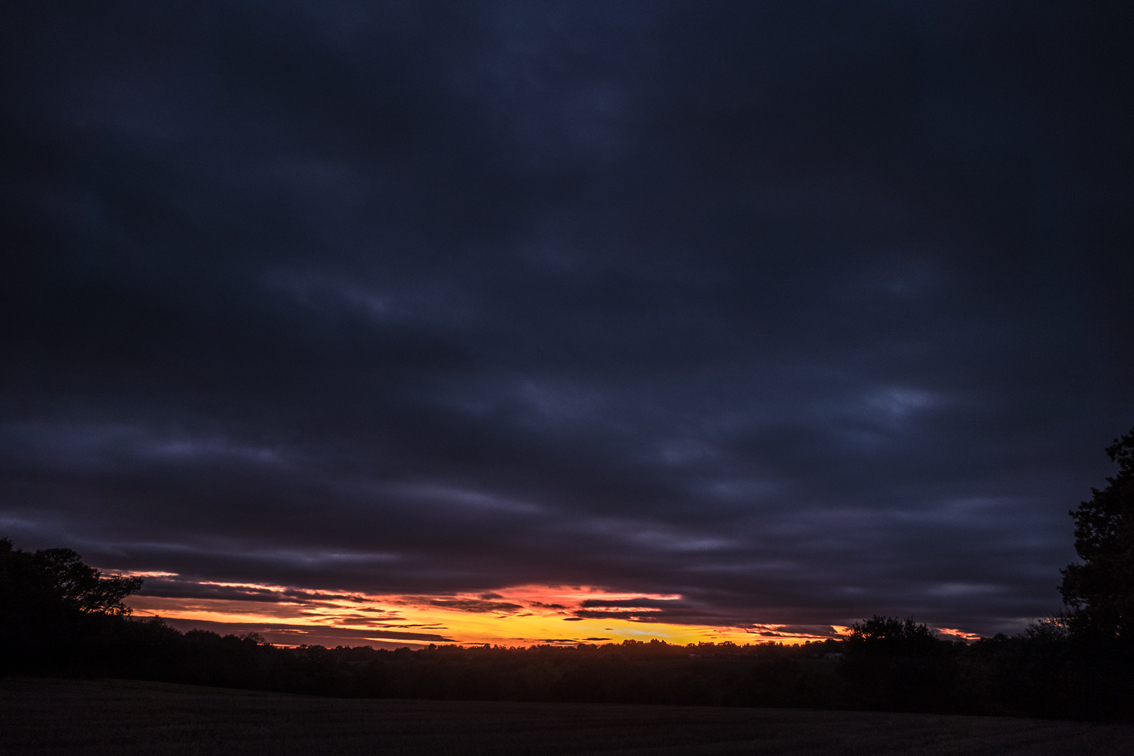 Despite this, the golden glow from the remaining narrow window of sunset was bathing the field (and Monty) in a rose-gold glow: 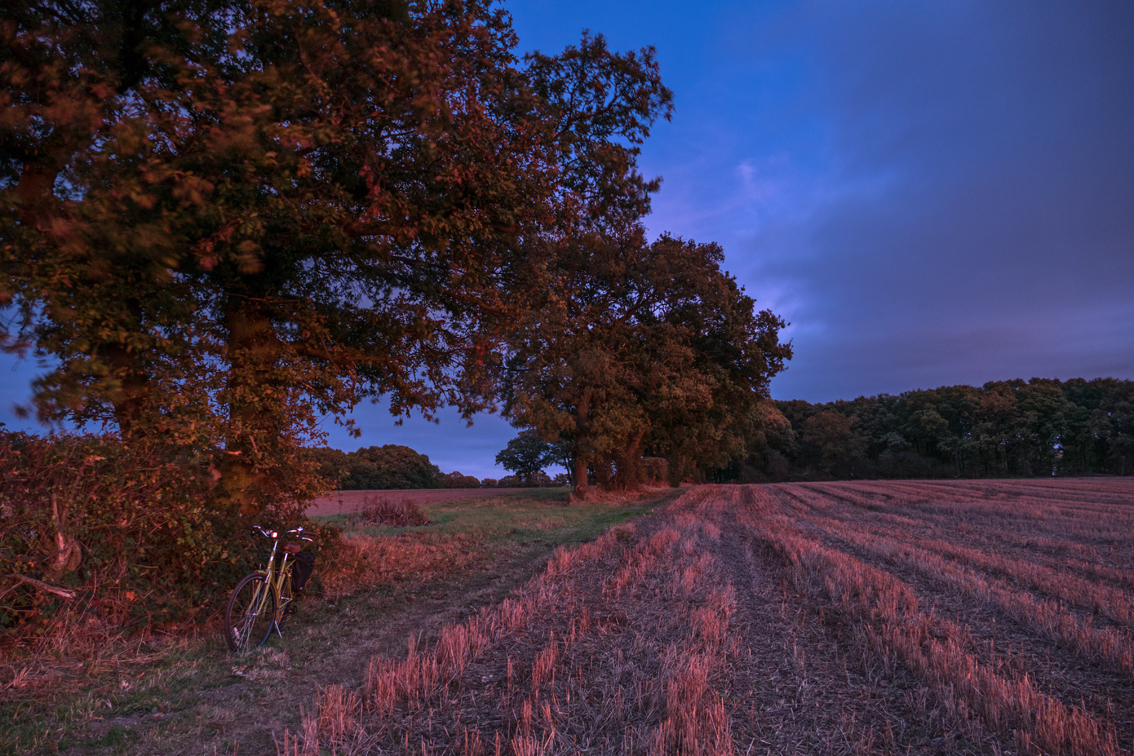 Turning back to the sunset, I was surprised to see that the dark clouds had again dispersed somewhat and that the western sky was again a mix of dark blue, gold and flame-red: 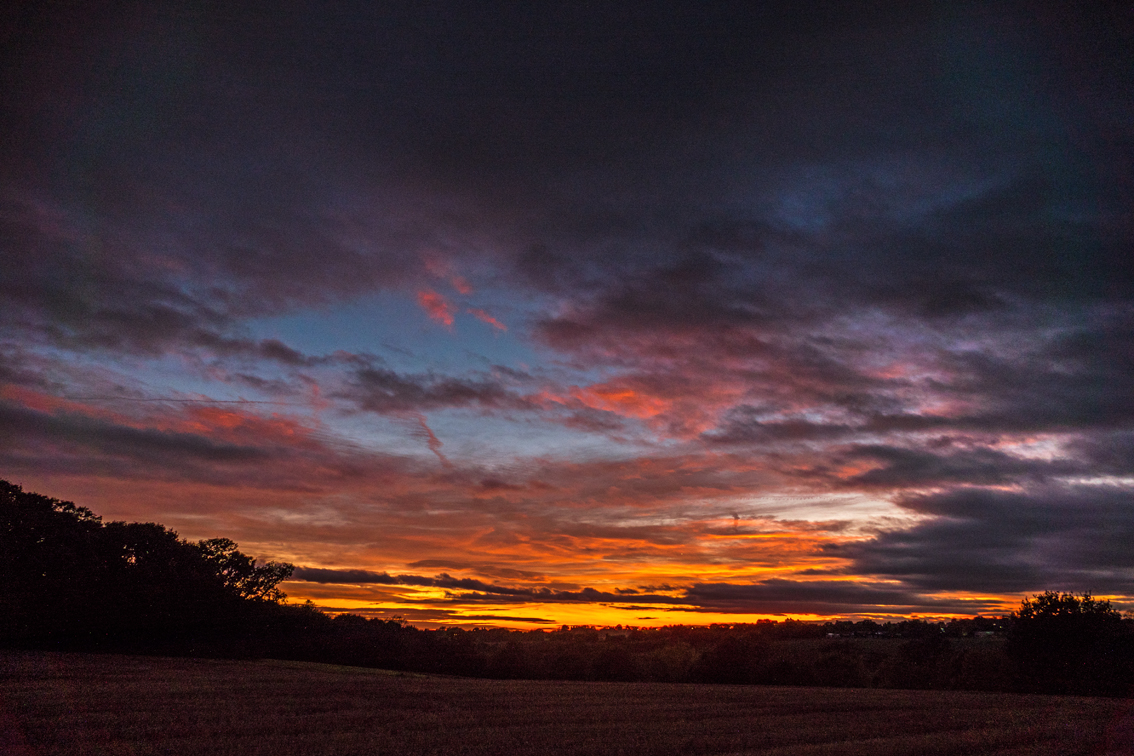 This turned the whole darkening sky the sort of orange-pink that had caused such a stir the other day during the visit of Hurricane Ophelia, but here it was going largely un-remarked, and it was a glorious feeling to be standing in the field bathed in this strange luminescent glow. The moon had appeared above the horizon too, adding to the glow as it dodged in an out from behind the racing clouds: 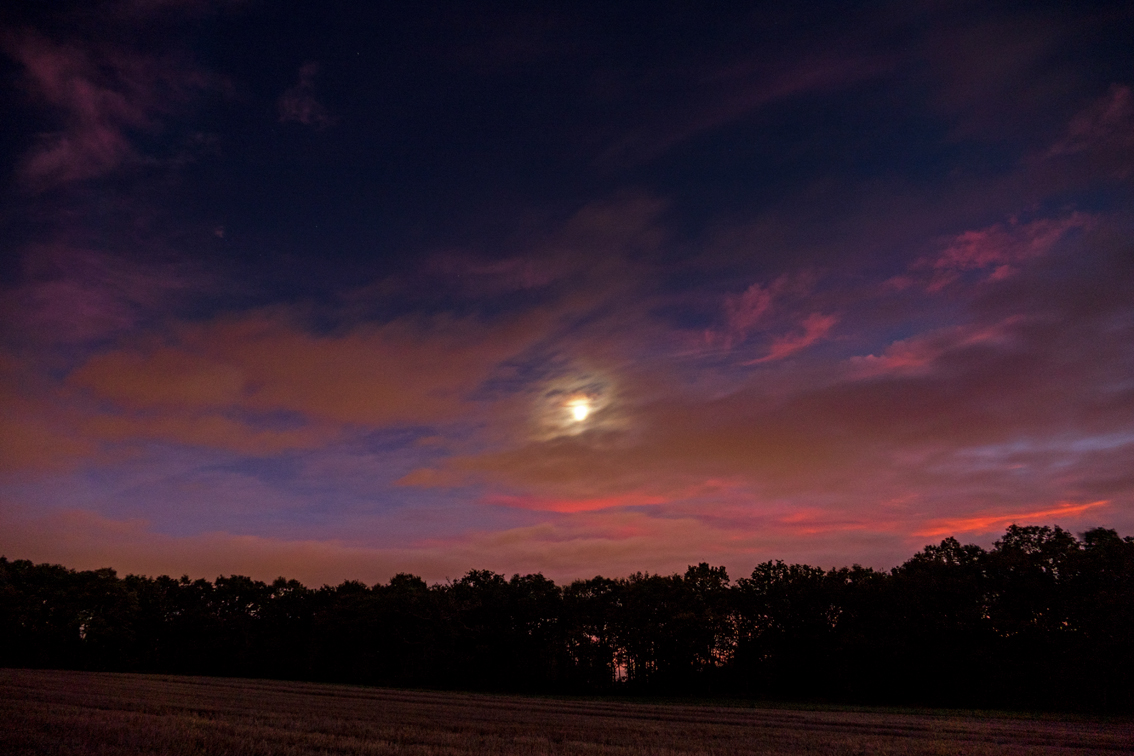 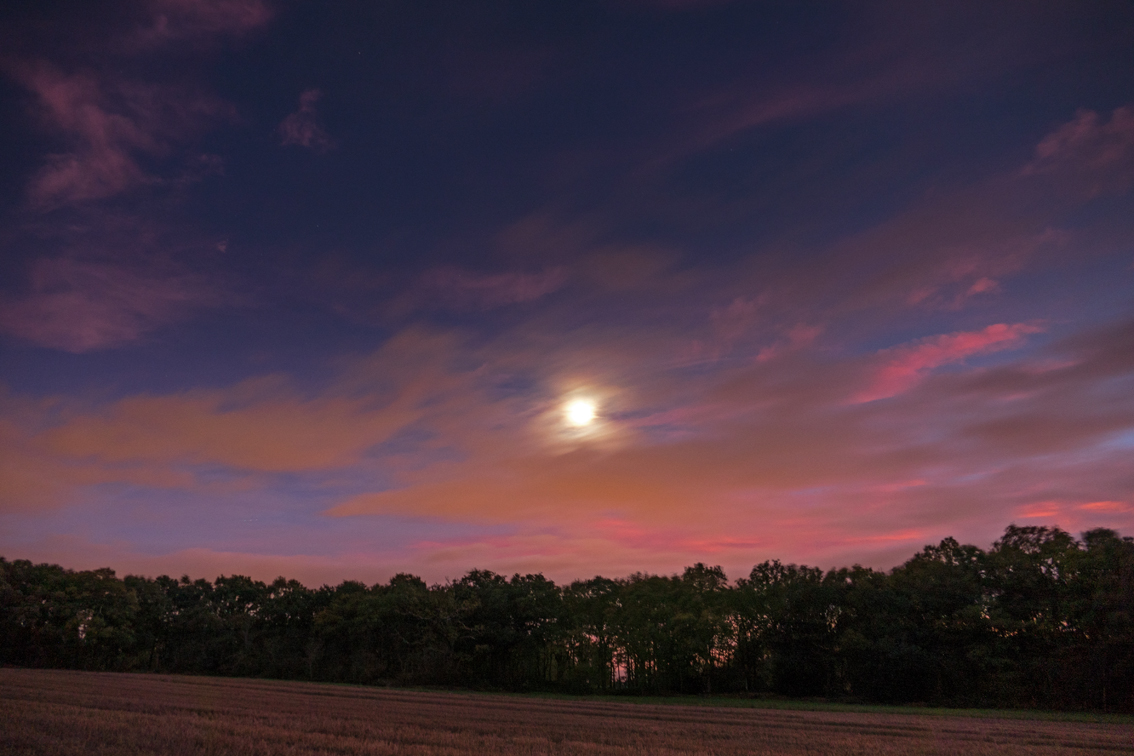 Finally, however, the light began to fade completely, though it still left a golden-red glow in the west: 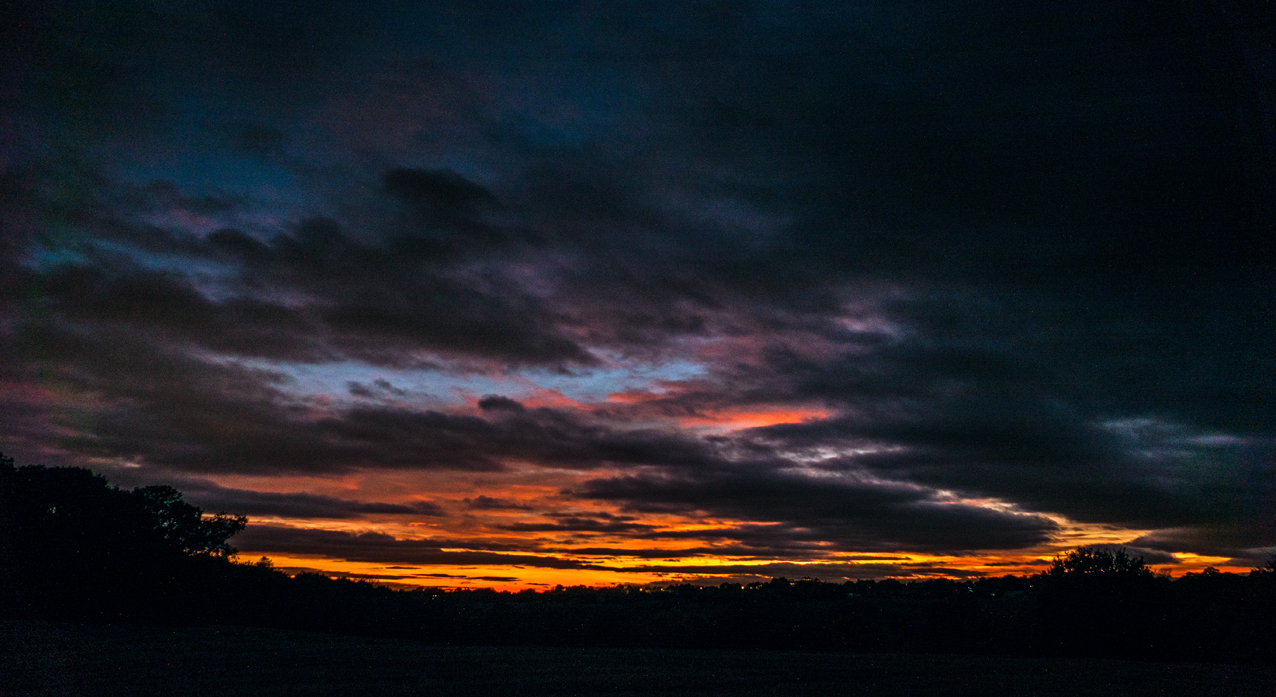 I was tempted to stay and see just how long it would linger, but the wind was picking up even more, it was now in effect pitch dark, and although Denis has an excellent front light I didn’t fancy pitching headlong into one of the deep drainage ditches that surround the fields so it seemed like a good moment to head home…. ….to find that England has finally won the World Cup !! Huge congratulations to the U17s, fighting back from 2-0 down to win 5-2 !! Spirit of 1966 🙂 (which I remember – in grainy black and white) 🙂