Well, the sky has been something of a talking point over the past week, what with Storm Ophelia, other-worldly skies worthy of Blade Runner, then Storm Brian. Unbelievably, given that I lug my camera round everywhere with me in case of interesting skies, the ‘Day of the Red Sun and Orange Skies’ was the one day of the year when I forgot to grab the camera as I left home for work. Consequently while everyone else in the south of Britain was snapping away with their smartphones and talking nervously about ‘the end of days’, I was kicking myself all round the university campus. Ah well…

The next day dawned bright and sunny, of course, so my hopes that the Sahara dust and Portuguese smoke would continue to hang over us were largely blown away along with the sand and smoke. I say ‘largely’ because in fact a close look at the hazy banks of stratus over the poplar field west of Chelmsford revealed a faint rosy tinge: 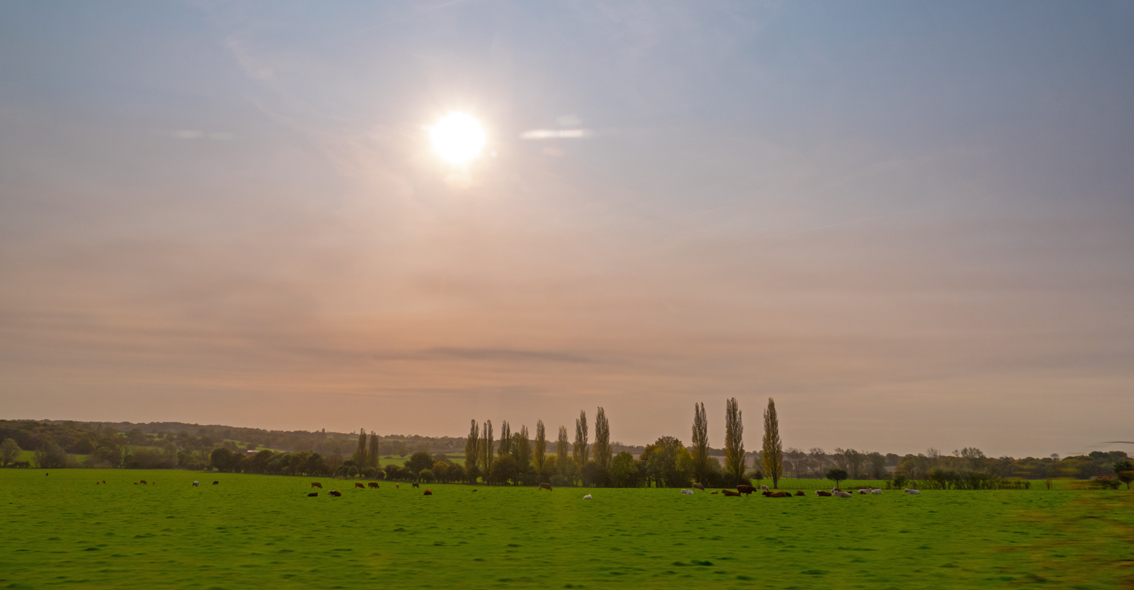 This tint remained as far west as the Lone Oak east of Shenfield: 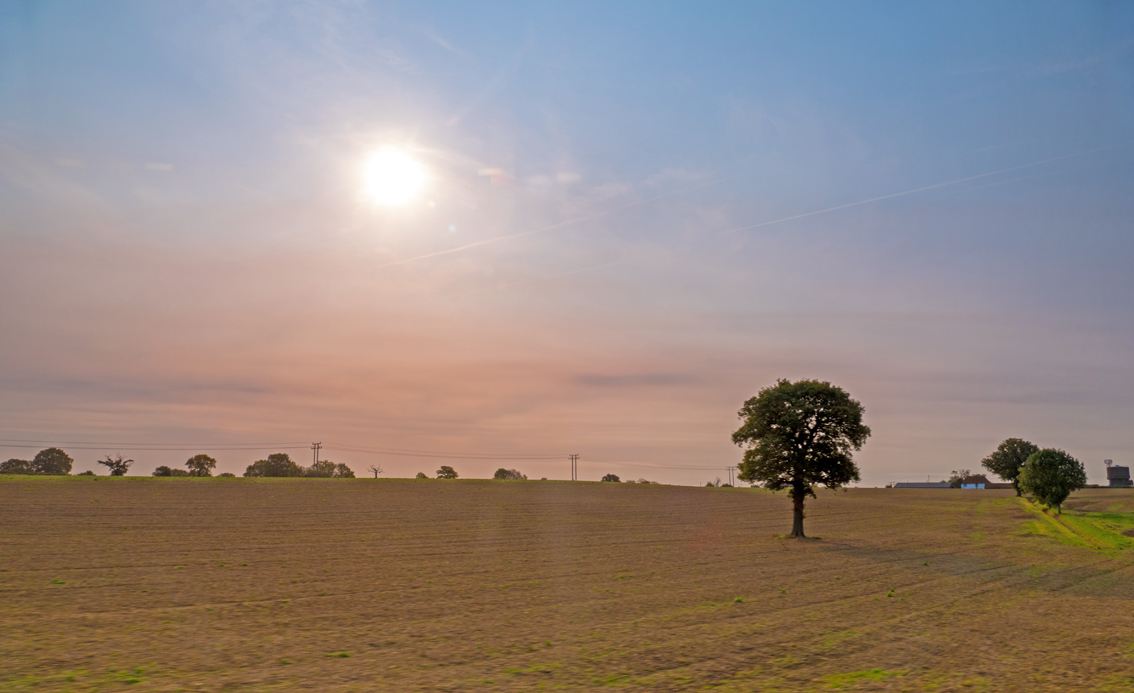 …but by the time I arrived at UEL’s Campus at the Royal Docks there was just the barest hint of rose in the banks of altocumulus and alstostratus which covered the sky and partially masked the sun: 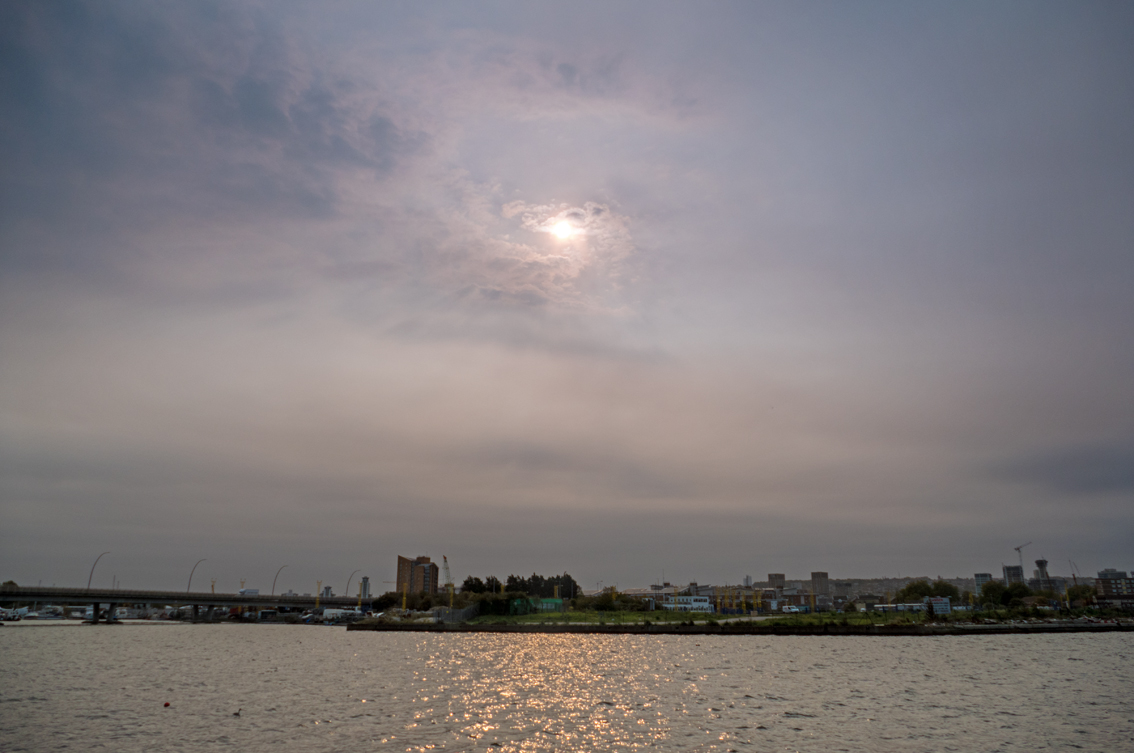 By lunchtime all trace of ‘Hurricane’ Ophelia’s Sahara dust had gone, swept away to the north but leaving a fairly confused sky in its wake: 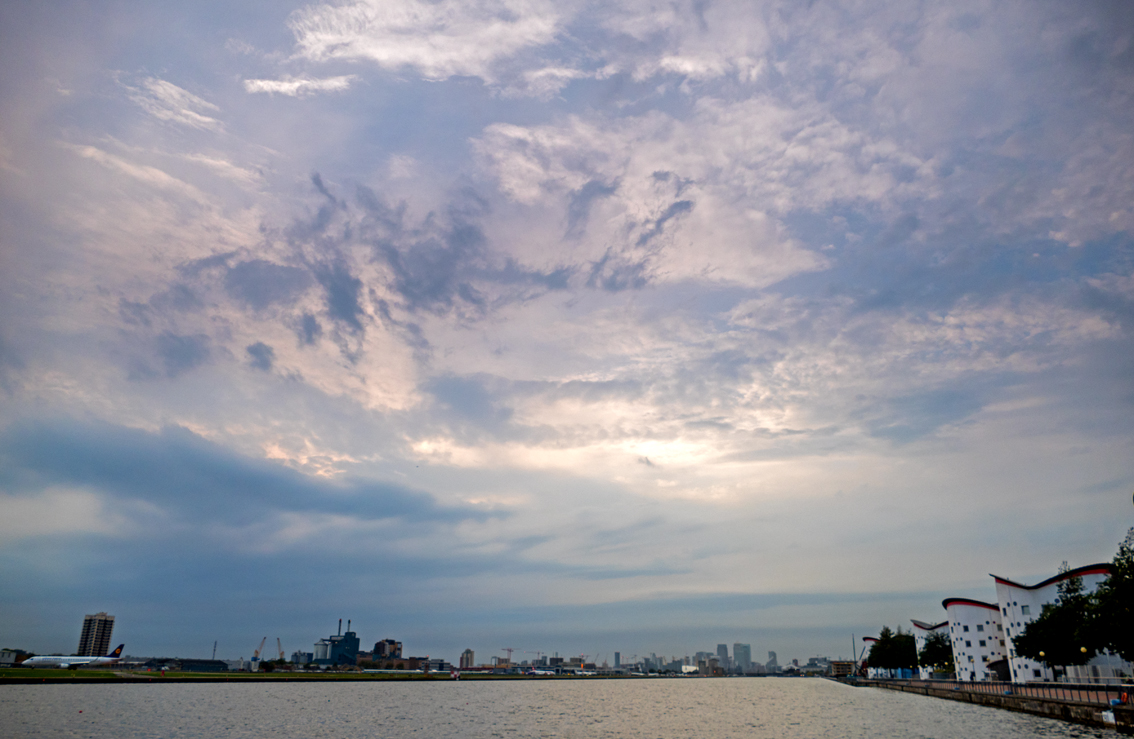 After a couple of days to gather our collective breath, storm warnings were again being posted, this time for Storm Brian. Reading these dire warnings, I feel that this is not ideal because I am due to be visiting a peatland restoration site in northern Cumbria with folk from Micropropagation Services, and indeed the sky looks increasingly ominous as I head north out of Euston towards Carlisle courtesy of Virgin West Coast: 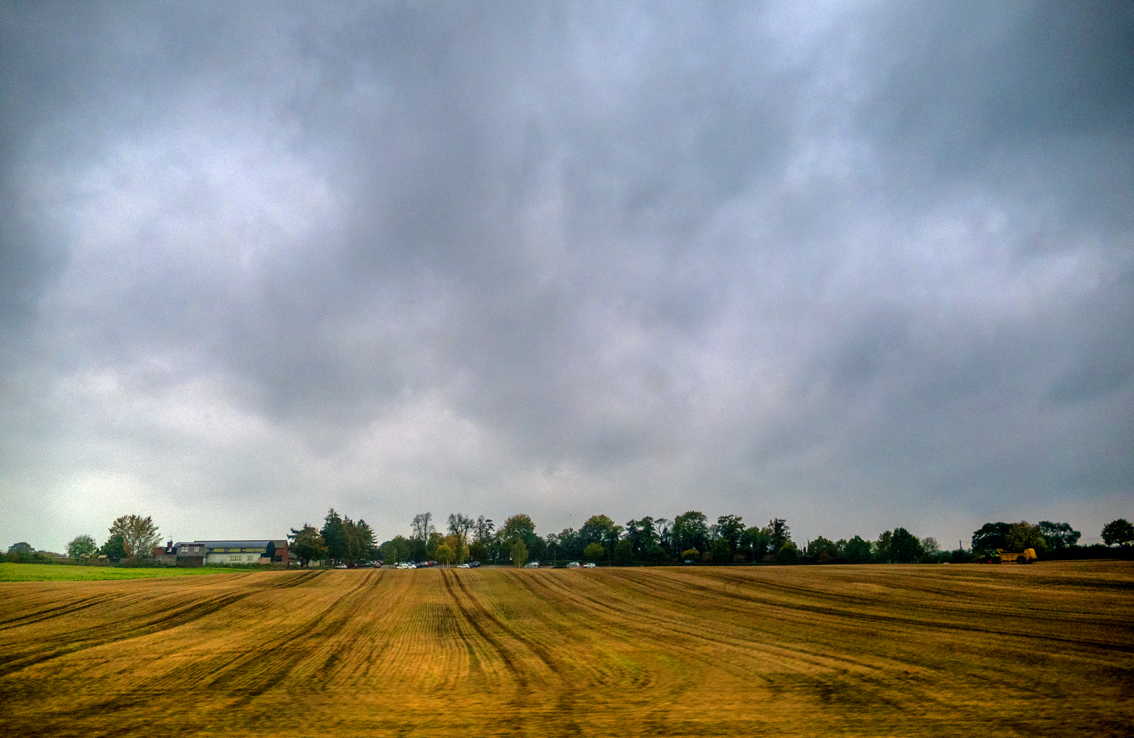 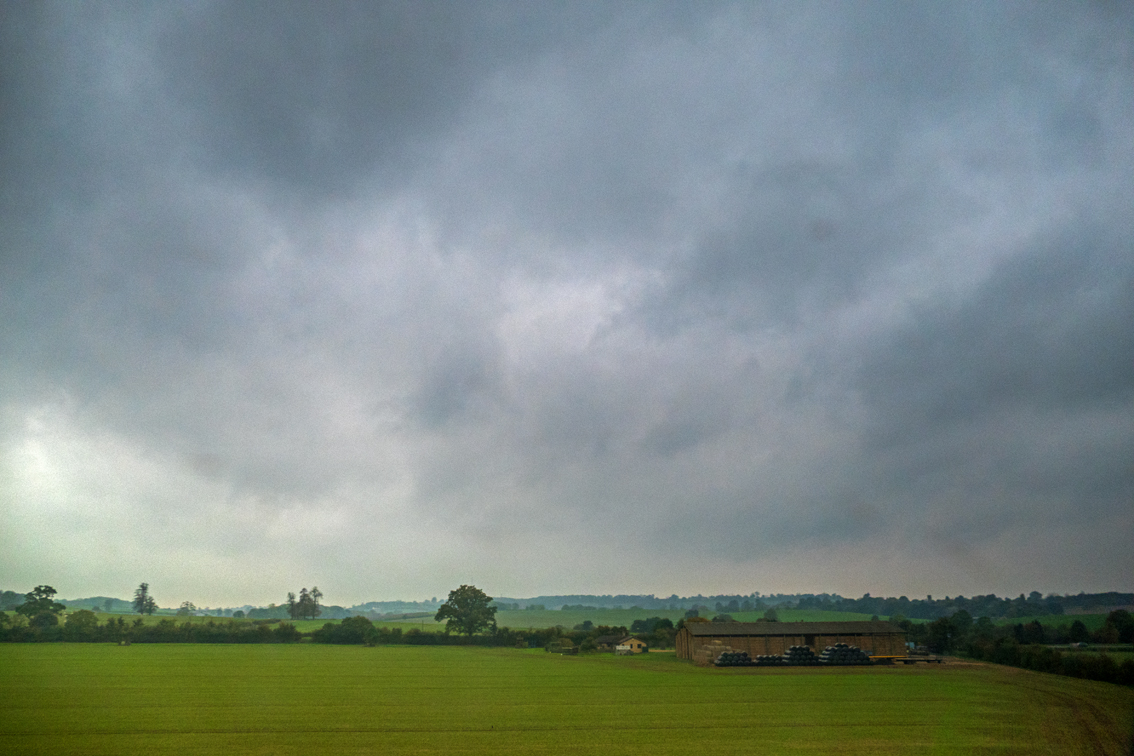 By the time my train approaches the Lake District, the familiar mound of Hutton Roof Crags and its extraordinary limestone pavement is looking decidedly damp, while the fields in the foreground have already surrendered to the flood: 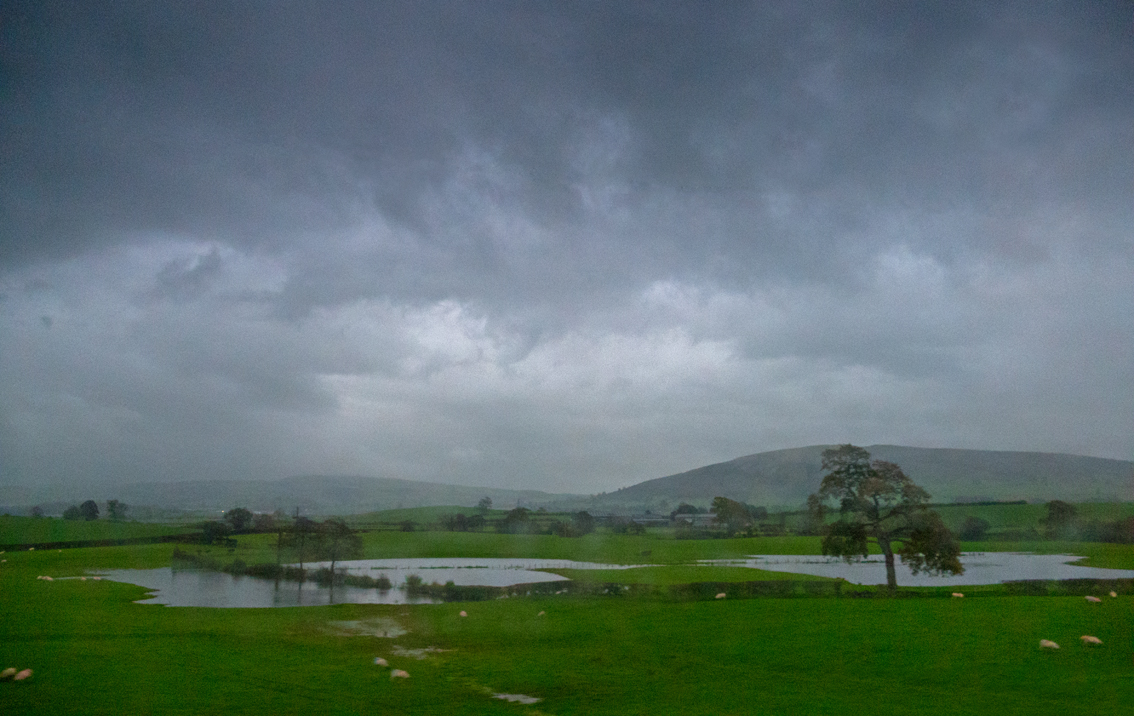 South Lakeland (where I started my career) is hunkering down beneath drenching bands of rain: 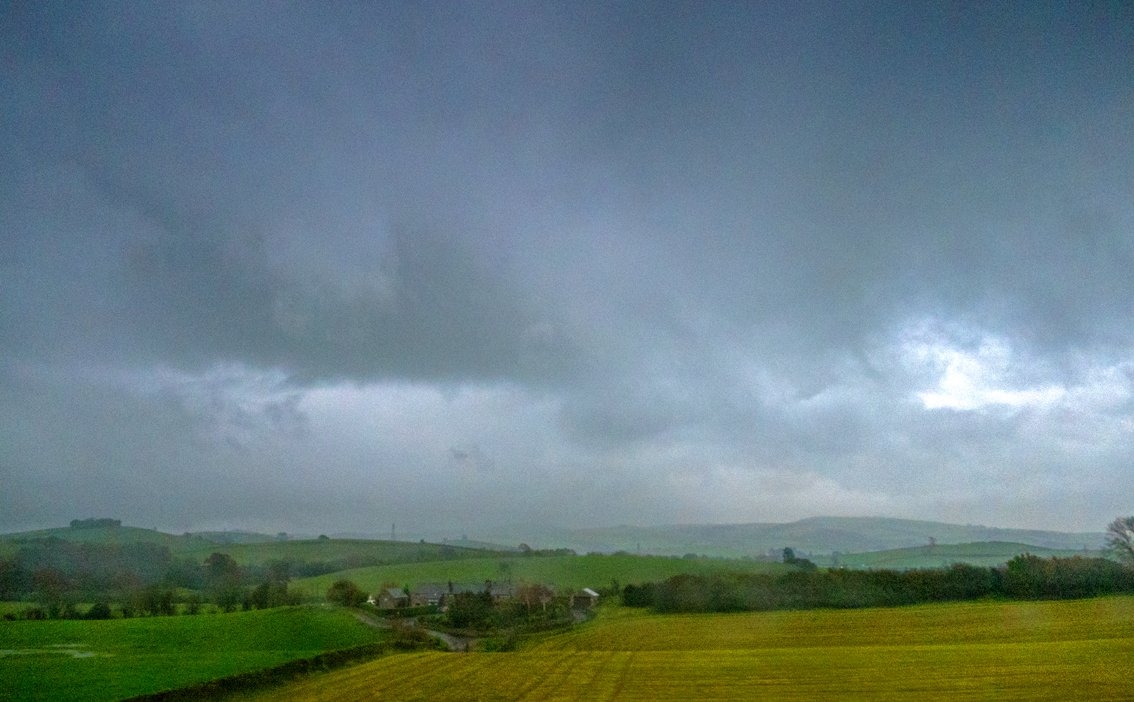 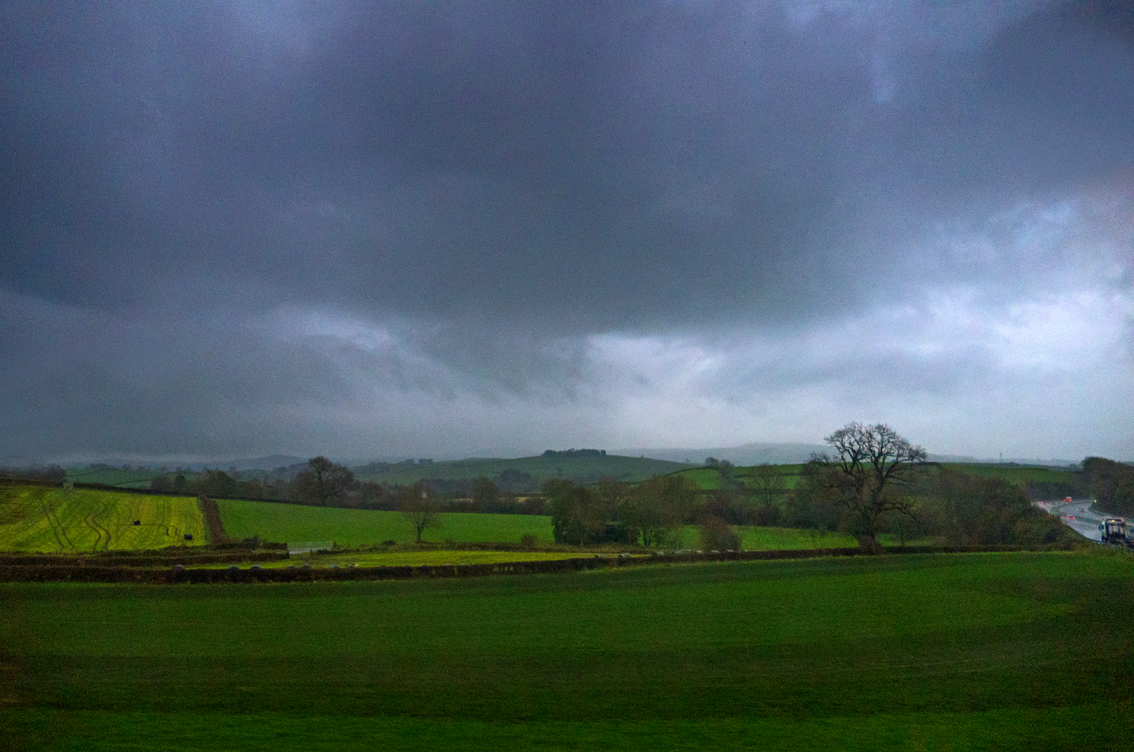 North of Kendal and heading towards the stunning River Lune gap as it wends its way between the hills of the Lake District and those of the Howgills, I am struck by the contrast of the scene at Fiddler Gill in comparison with the last time I crossed Flodder Beck: 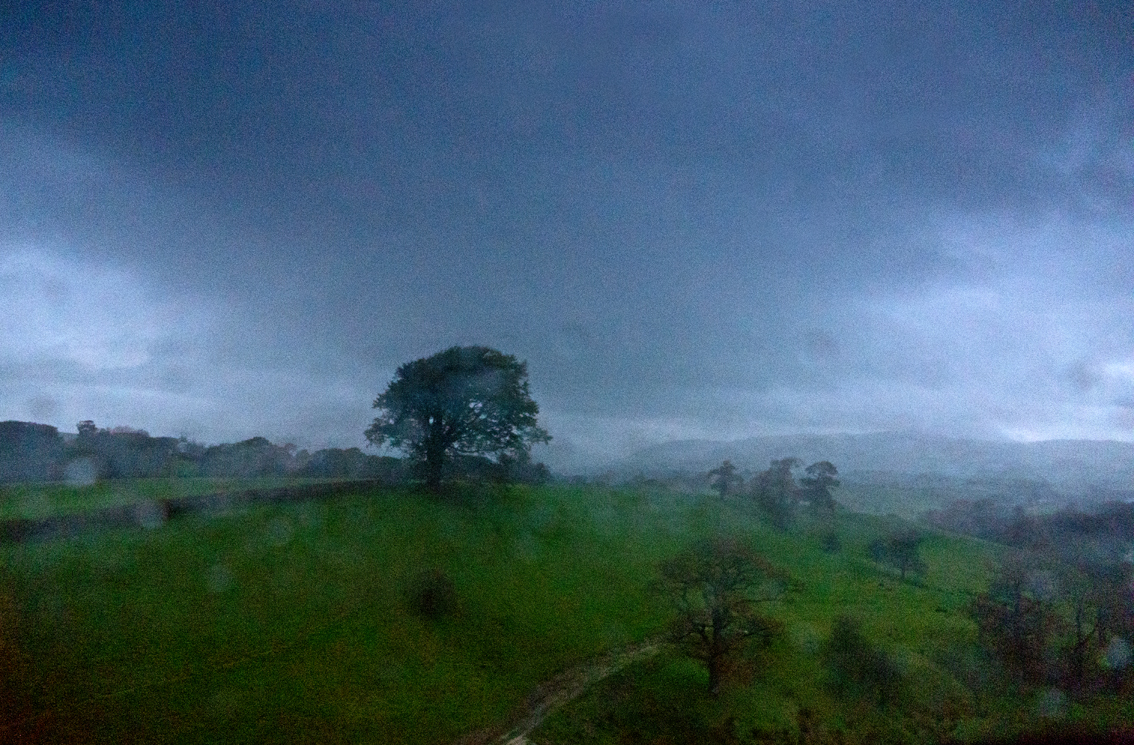 This was only back in August: 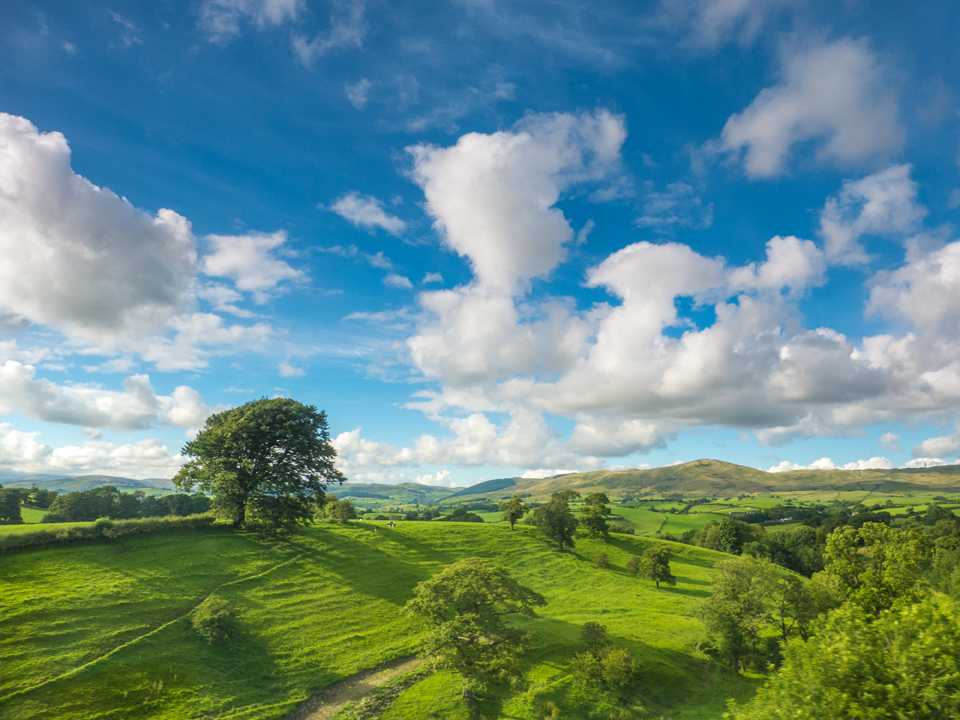 This is not an evening to be wandering ‘lonely as a cloud’ in Lakeland; even the clouds are not wandering lonely this evening: 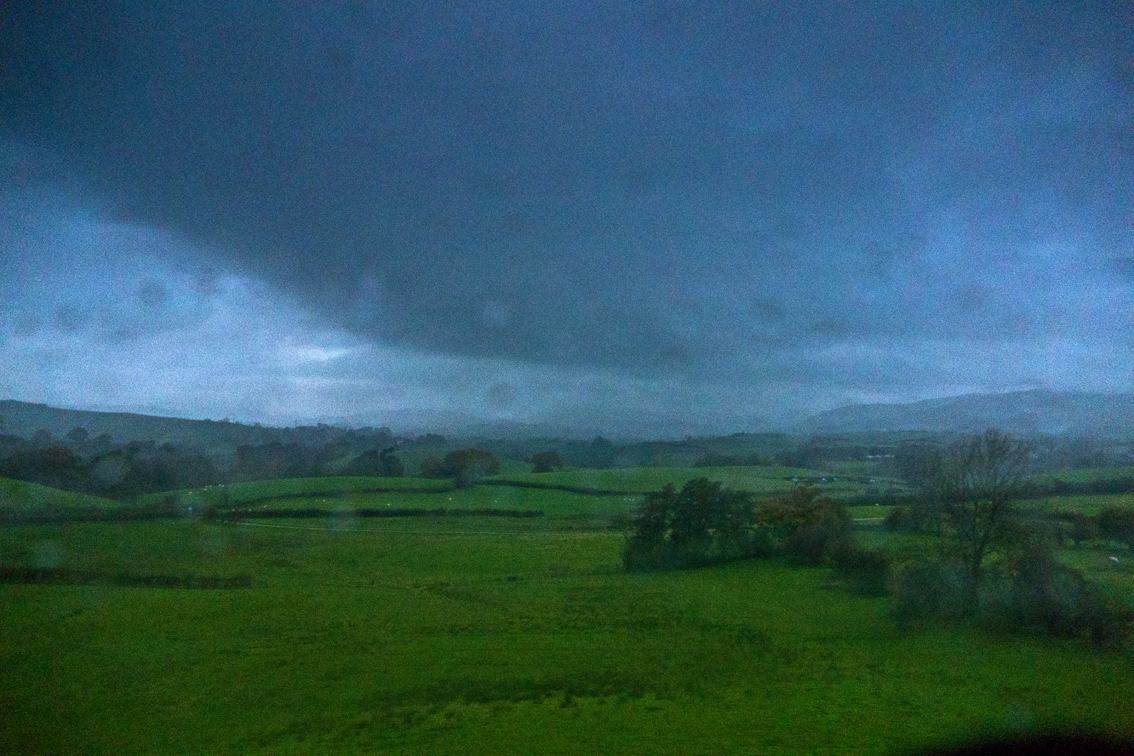 After the Howgills we emerge onto the long climb up to Shap Summit, and whereas on a good day there are wonderful views west all the way to the black rugged Borrowdale volcanics of the Langdale Pikes in the heart of the Lakes, this evening the heart of the Lake District is invisible, obliterated by the advancing weather fronts of Storm Brian as my train arrows north into the gathering dusk: 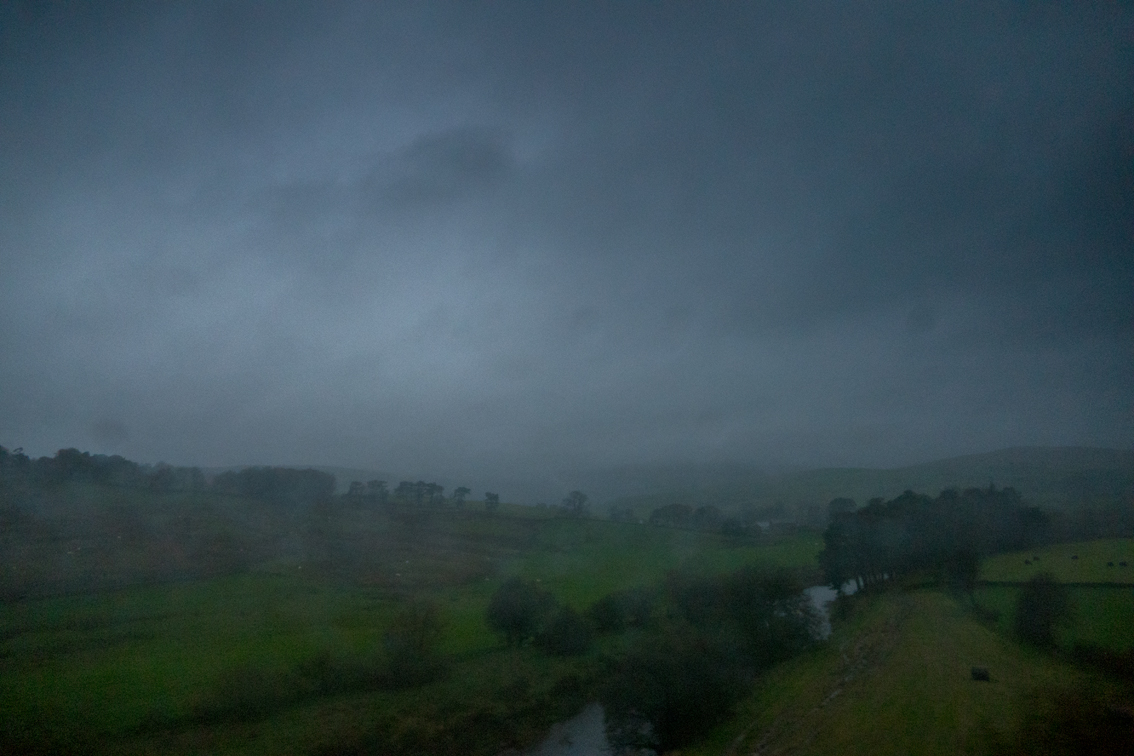 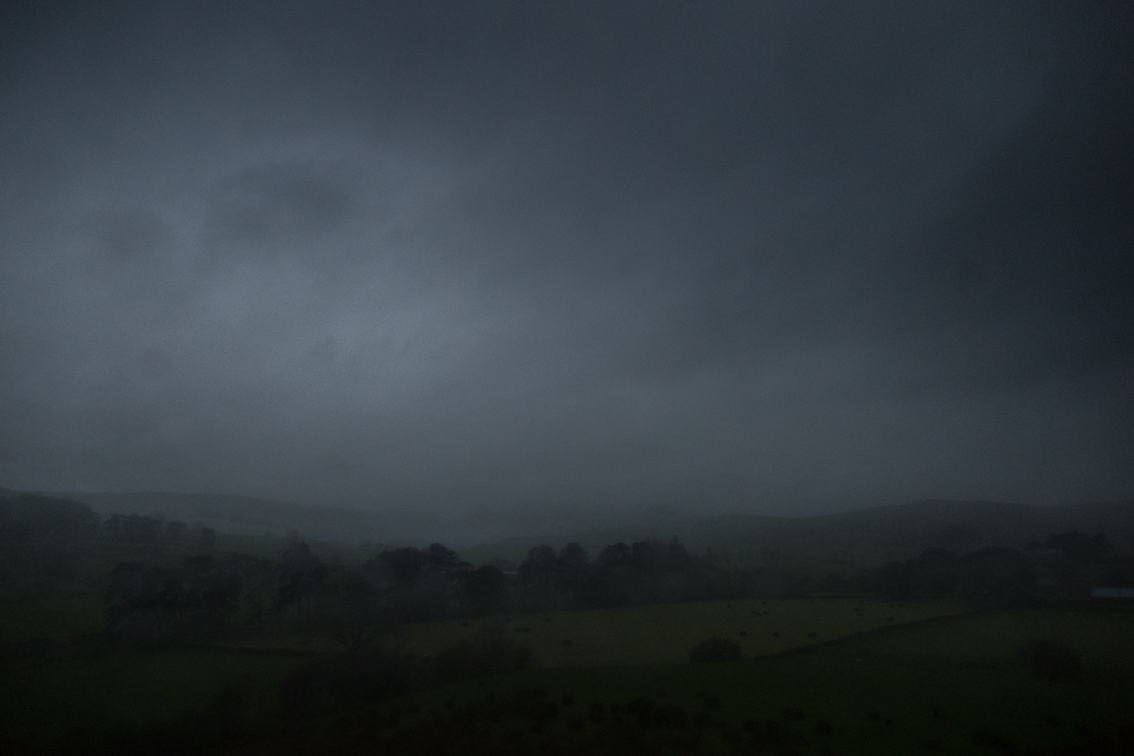 Things don’t look enormously promising the following morning, with roiling banks of stratocumulus by the time we arrive at the site (Bolton Fell Moss – scene of an enormous amount of work for me and my colleague Jack a few short years ago, involving, amongst other things, purchase of a huge pizza oven and a criminal fleeing to South America with a suitcase full of money – but that story is for another time): 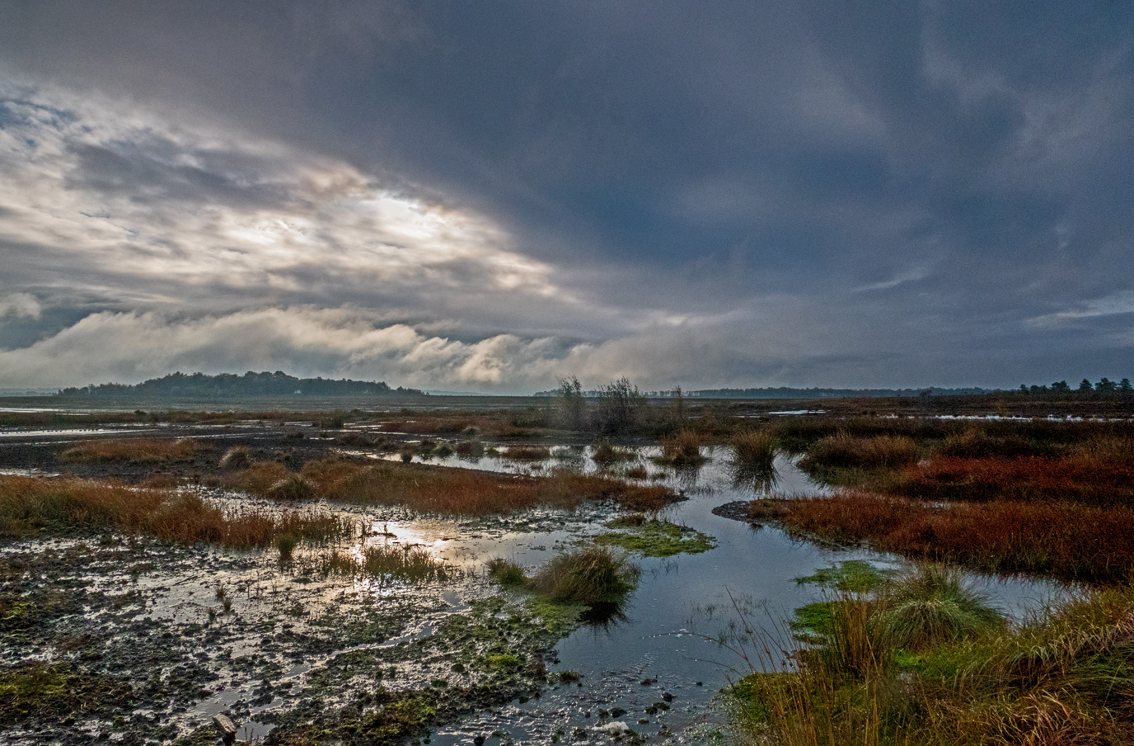 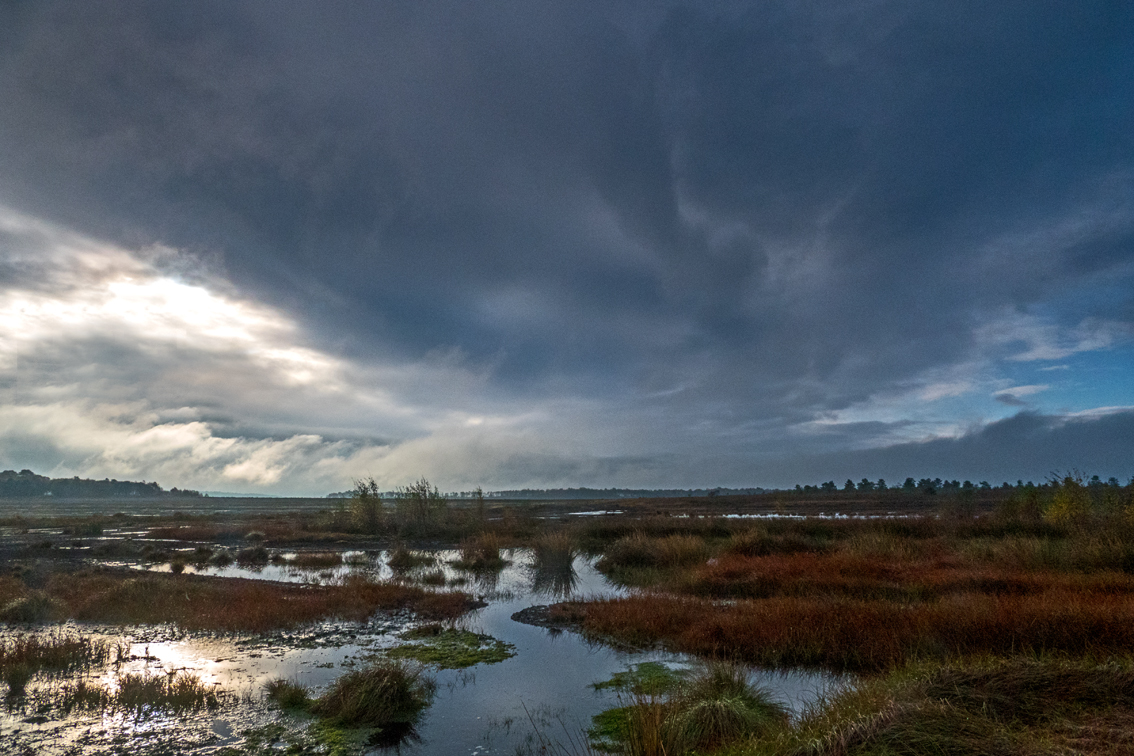 To our relief, however, after wandering round the horizon in distinctly threatening manner, these huge clouds appear to lose interest in threats and menaces, abruptly transforming themselves first into a sort of ground-hugging but rather gentle bank of cumulus fog which then drifts apart and fragments like pieces of a damp paper napkin to reveal beautifully clear blue sky: 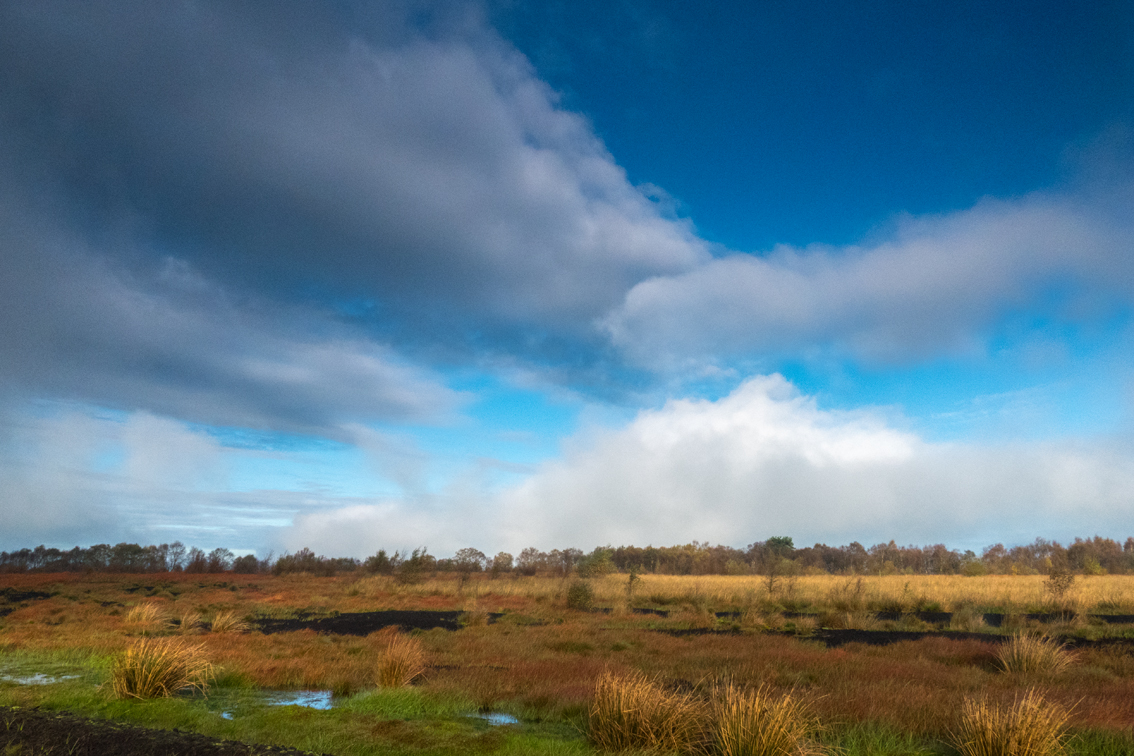 Within half an hour the entire sky has become an orderly series of ‘cloud streets’ as ribbons of cumulus mediocris are shaped and aligned by the steady wind. The last thing I had expected to find on the journey north was that by the end of the site visit I would be sunburned…! 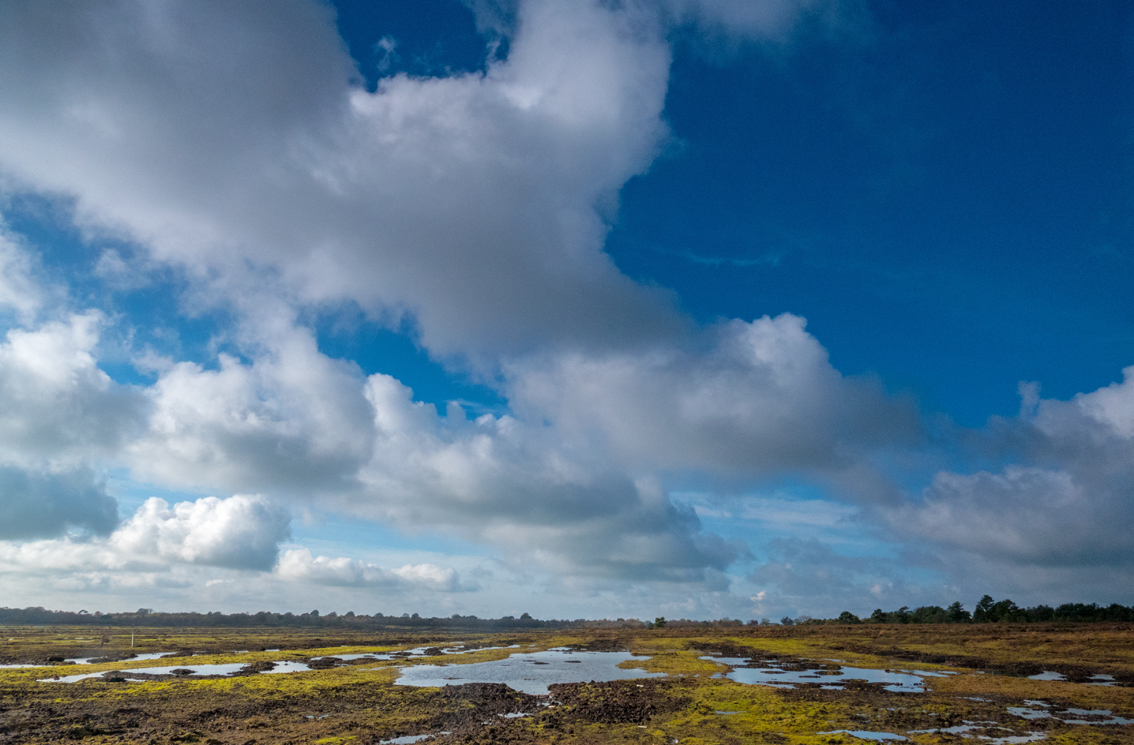