To continue the saga of the 2016 Munsary Monitoring Experience…
…the morning after the Day of Being Playthings of The Gods – or at least that’s what it felt like at times – dawned rather grey but at least it wasn’t actually raining.

The three teams set off to their allotted transects, me teaming up with Jack Clough and Nathalie Triches. Once I’d done the vegetation recording with Jack noting my calling-out on the record sheet, Nathalie took over to measure the microtopography, demonstrating an elegant form of ‘Laser-Levelling Yoga’… 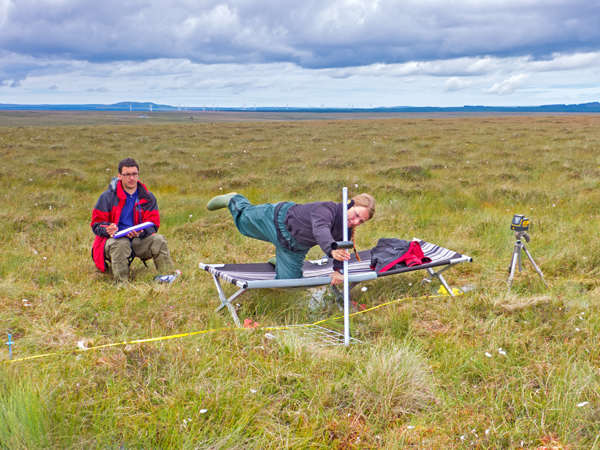 I, meanwhile wandered off to capture some of the bog plants in what was fast turning into a somewhat sunny day. The bog asphodel (Narthecium ossifragum) was looking rather fine, being the only obvious yellow flower in the general bog vegetation (tormentil is also yellow, but much less obvious): 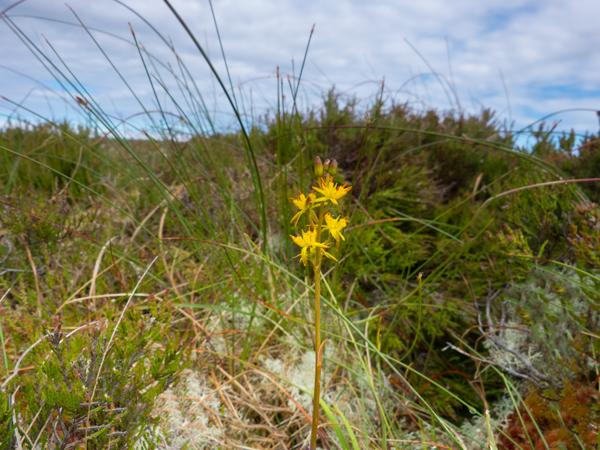 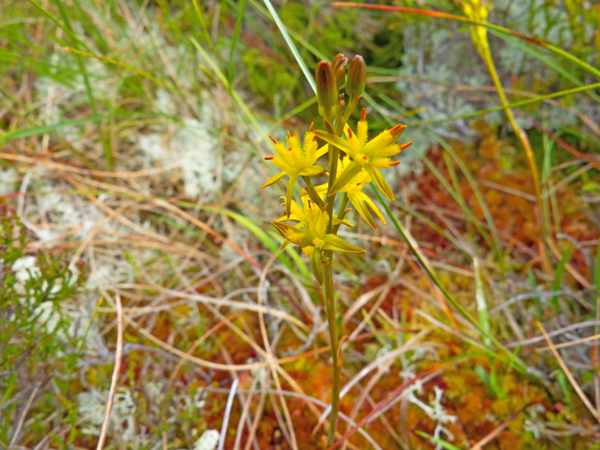 It’s the Sphagnum bog moss, however, that’s the key to the site and one of the main drivers of peat formation. As the sun started peeping rather bashfully from behind the increasingly broken cloud, the reds of Sphagnum magellanicum and S. capillifolium and the ambers of S. papillosum and S. tenellum shone like traffic lights in the bright sunshine, the Sphagnum sward being pierced by the sabre-shaped leaves of the bog asphodel and the stems of heather (Calluna vulgaris) and cross-leaved heath (Erica tetralix): 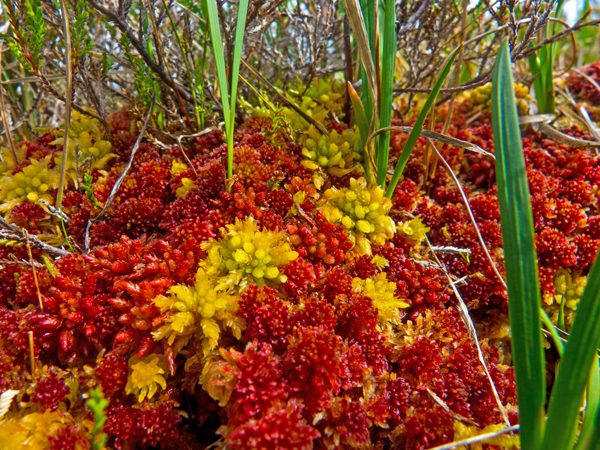 In the bog pools the large trifoliate leaves of bog bean (Menyanthes trifoliata) were reflected in the almost mirror-like water surfaces because the wind had dropped – which meant that the midges and clegs (horse flies) came out to play. Always a source of joy… 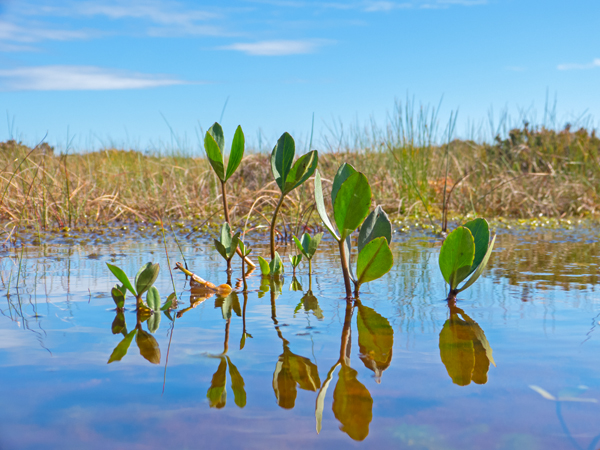 That evening, an orange moon rose above the fields to the east of Thurso and vanished into a steadily thickening bank of cloud. This did not look good for the following day… 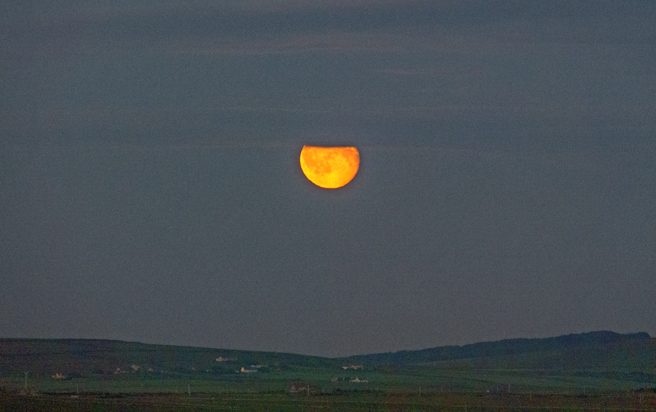 In fact so miserably damp was the following day that I didn’t bother taking many photos at all. I did manage a somewhat waterlogged view of the moss Hypnum jutlandicum growing across a Sphagnum sward within which can be seen (especially for John!) the green-purple ‘golf-balls’ of the leafy liverwort Mylia taylori, while the white stag’s-antler network at the top of the photo is the lichen Cladonia portentosa (formerly C. impexa) and the large green leaf slicing through the Sphagnum sward to the right is common cotton grass (Eriophorum angustifolium):

The pink flowers bunched at the top of grey-green heather-like stems are those of cross-leaved heath (Erica tetralix) – a species more characteristic than heather of wet, healthy bogs – here dappled with drops of the mizzly rain which accompanied us much of the day: 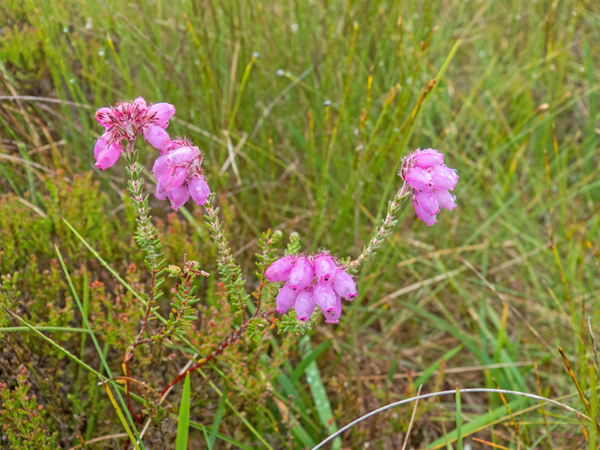 Leaving the site that evening, the sky to west looked like something from Mordor in Lord of the Rings, with thick roiling ridges of cloud being stirred by the Scaraben ridge and the summits of Morven and Maiden Pap: 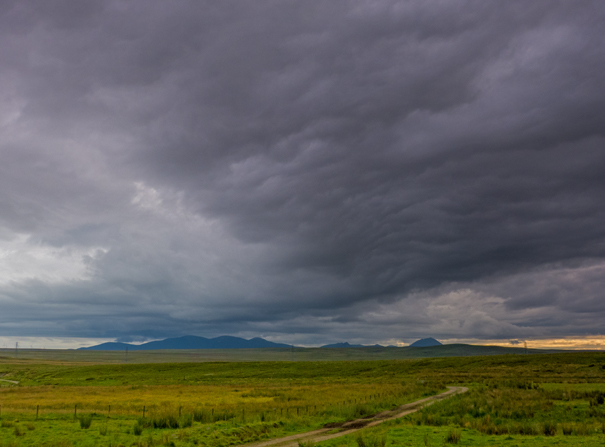 This really didn’t look good for tomorrow, and although the worst of the rain went hammering through during the night, the weather was pretty dire all day, with the result that I didn’t take any photos other than the standard stereo transect photos with the waterproof camera today. 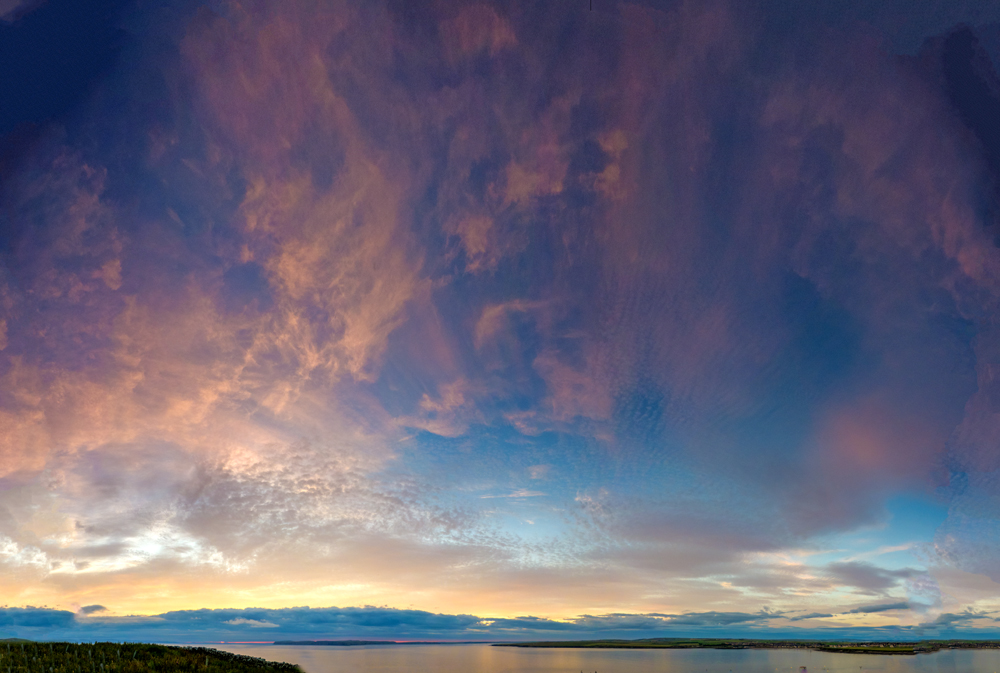 …and just to emphasise that we were in Scotland, here’s some heads of spear thistle (Cirsium vulgare) which woke me up very effectively as I was blundering about gazing up at the skies. I still have some of the thorn fragments in my thumb, visible as white spots as I type this: 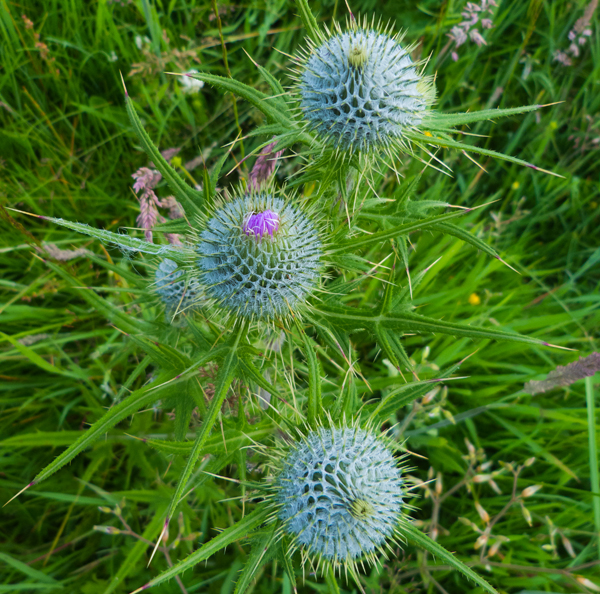 Within half-an-hour the sky over the Orkneys (the islands in the distance – or more specifically, the island of Hoy) had turned a speckled grey like the breast of a teal: 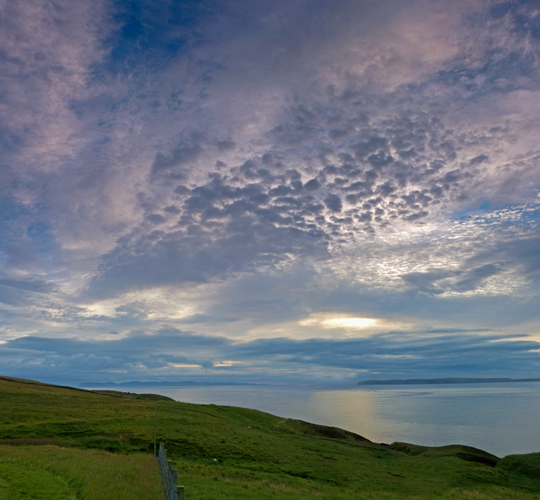 Meanwhile the sky to the west, advancing over our ‘Northern Lights’ cottage (to the left of the photo), was a confusion of high cirrus, cirrostratus, cirrocumulus and dark banks of altocumulus:

As I watched, the altocumulus thickened, darkened and advanced across the sky, presaging miserable weather yet again for our working day:

We spent the day checking fixed markers to see whether the bog surface showed any signs of movement. An interesting exercise, but the drenching mizzly rain made it less than fun much of the time. One advantage of the rain was that it brought out the ‘dew’ droplets of the sundews, with some particularly striking examples of great sundew (Drosera anglica): 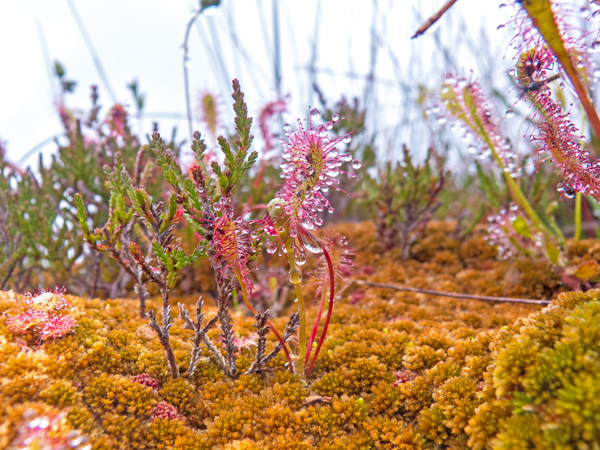 …and even the rather more self-effacing round-leaved sundew (Drosera rotundifolia) resembled a little jewelled brooch:

Meanwhile the common cotton grass (Eriophorum angustifolium) seed heads were looking their cottony best. These make poor woven material but were used to make bridal stockings in the Scottish Highlands because the material is so soft and could cope with one evening’s wedding ceilidh dancing: 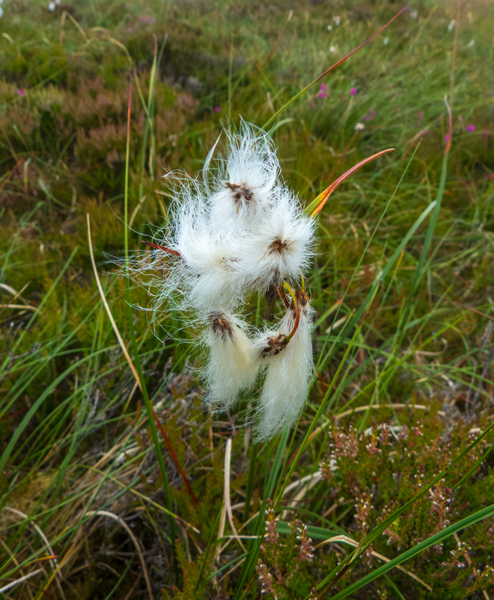 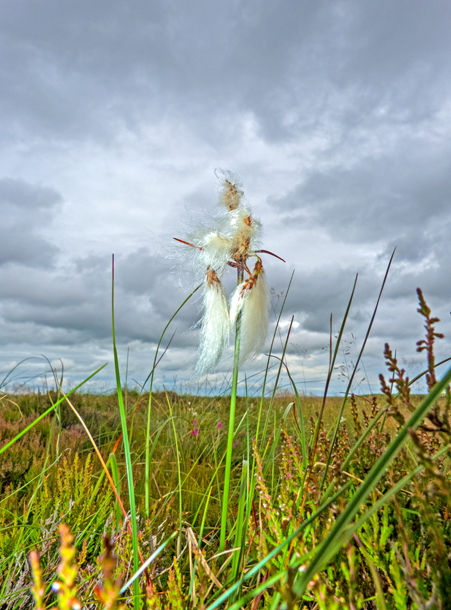 Damp, but with much animated discussion about some rather interesting results, we headed back to Northern Lights to prepare dinner and cross our fingers that all the rain was now sufficiently bored with Caithness that the rain-clouds would finally drift away eastwards and leave us with a dry day on the morrow. To find out whether our hopes were fulfilled (and discover the secret of the body lying on the bog), you’ll have to wait until Part 3 of the Munsary Monitoring Experience.