The last two weeks of July were spent up in Caithness, carrying out repeat monitoring of Plantlife’s Munsary Peatlands Reserve.   The monitoring of the reserve is undertaken on a 7-year cycle.   We established the baseline in 2002, then undertook the first cycle of repeat monitoring in 2009.  Consequently 2016 represented the second cycle of monitoring.  The second cycle is exciting because this gives three points on the curve of trends, giving a clearer picture of where the site is going in response to Plantlife’s management of the reserve.

Details of what we did and what we found will appear in our report to Plantlife in due course, but this blog is about the experience of doing the  monitoring work and being up in the far north. In fact most of the blog is about the amazing skies (and the consequent weather)…. (click on photos to see them full-size)

Plantlife’s Munsary Peatlands Reserve lies less than 30 miles south, by road, of both John o’ Groats and Dunnet Head – the latter being the true location of the most northerly point on the British mainland. The reserve itself is located down a very long and very difficult track which begins a little way off the A9 some 20 miles south of Thurso, the County Town of Caithness and itself located on the north coast. A ‘robust 4×4 vehicle’ is the only sensible way down the track, which is in any case not generally open to visitors, so we hired a long wheelbase Land Rover Defender for the two weeks. The two-day journey north from London felt, as it always does with a Land Rover because of the large all-terrain tyres, rather like riding a slightly skittish horse that needs to be constantly encouraged back to the correct route, so it was a relief to arrive at ‘Northern Lights‘, the self-catering cottage overlooking Scrabster and Thurso, which was to be our base for the next two weeks.

We were undertaking the work in partnership with the Environmental Research Institute (ERI) of the University of the Highlands and Islands (UHI), so our first day out at Munsary Cottage in the middle of the reserve saw us assembling the equipment needed for a training and standardisation day with everyone to ensure that we would all be recording in the same way over the coming days. The UEL team consisted of myself, Jack Clough (Research Assistant), Jerushah Jardine (PhD student), John Riggall (former NCC Peatland Team colleague) and Sam Jelliman (taking a break from Sustrans), while the UHI team consisted of Roxane Andersen (ERI Research Fellow), Pete Gilbert (ERI Technician), Nathalie Triches (an ERI intern student from Switzerland) and Gearoid Murphy (taking a short break from the RSPB).

John Riggall demonstrates the use of the self-levelling laser to measure microtopography while balancing on our Outwell camp beds to prevent trampling disturbance to our permanent transects:

Dawn on the next day saw a golden (rather than red) sunrise towards Dunnet Head and across the Pentland Firth towards the Orkneys, potentially promising a good day: 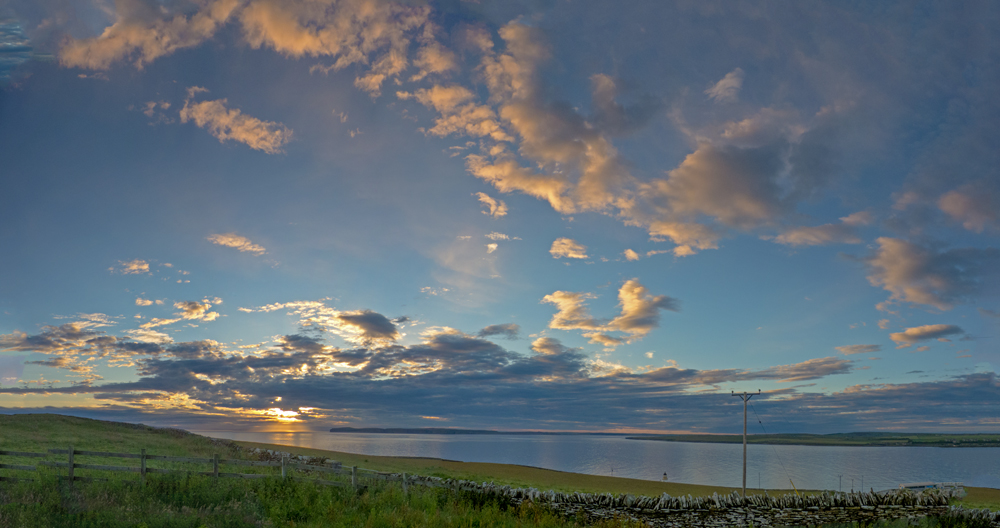 Once out at the cottage the sky was blue and the day looked like being a hot and sweaty tramp across the bogland. It was the first day of being divided into teams, so some time was spent sorting the three sets of equipment:

…until we had each team loaded with its own rucksack of essential gear. Here’s Roxane all ready to go with a rucksack almost bigger than her, while Sam checks the GPS coordinates of their first transect of the day:

As we were walking out to Rowens Dubh Lochs a red deer hind galloped past across the bog towards Munsary Cottage:

Meanwhile the sky had cleared to leave just a few isolated cumulus and much hot sunshine blazing down onto the expanse of bog-swathed landscape:

Once at Rowens, we separated into three teams. Having arrived at the general vicinity of their first transect, Gearoid and Roxane watch as Pete straps on snowshoes before carefully seeking out the exact location of the transect, which we do using our Bill Wyman metal detectors (yes, that Bill Wyman!):

Amidst all the to-ing and fro-ing and recording, I managed to snatch a photo of bog asphodel (Narthecium ossifragum) in flower. Its scientific name ‘ossifragum’ reflects its country name of ‘bone-breaker’, being reputed to cause brittle bones in stock who graze on it. It may indeed contain an enzyme which makes bones more brittle, though this is not confirmed, but what is certainly clear is that stock grazed on a rain-fed peat bog will receive little calcium from their grazing and may thereby develop weakened bones. It is a member of the Lily Family, and the German name is ‘Moor Lily’, which is rather more lyrical than the British ‘bog asphodel’, or ‘bone-breaker’…

Driving off the site that evening, we were confronted by a crazy cirrus sky surrounding the setting sun to the west and blotting out half the sky. This did not bode well for the morning…

Things did not improve as the evening wore on, with the final sunset bringing long streamers of cirrus racing out of the west, then vanishing to the east over our Northern Lights cottage and off towards John o’ Groats:

That night all hell broke loose, with thunder, lightning and tremendous deluges of rain. The wifi in our cottage was completely fried by one particularly spectacular bolt of lighting about 2 a.m., although by all accounts things were even worse further south in Scotland.

We awoke to the distant rumble of thunder and a threatening mizzly rain. Heading out along the track we encountered a bovine traffic jam:

Having negotiated the cattle, we arrived at Munsary Cottage to the increasingly loud rumbles of thunder. Heading off towards the main Munsary pool system and carrying large metal rods, metal camp-beds and metal detectors, we became increasingly dismayed as the thunder headed slowly but surely towards us. By the time we’d arrived at our transects the rain was coming down in monsoon quantities, almost making it difficult to breathe, and then the lightning started flashing down all around our own horizon. I tried calling up the other two teams on the radios to suggest we consider abandoning things, but there was so much static and rain noise that we just couldn’t hear each other and besides the long walk back was likely to be just as dangerous as remaining where we were. A double bolt of lighting hitting the wind turbines not far from where John’s team was working led him, wisely, to suggest that his team lie down in the heather for a while – a suggestion which his team members adopted immediately and with some enthusiasm. The other two teams were in such a wet area that lying down wasn’t an option – unless team members preferred drowning to being struck by lightning. Still, we were all wearing rubber waders, we kept some distance from the metal equipment for a while, and the lightning never approached nearer than a mile or two, so we just worked steadily on through the storm and eventually it became bored and drifted away to cause mayhem and excitement elsewhere.

Unsurprisingly, there are no photos of this event even though we had waterproof cameras with us, partly because the sky became so dark that there was little light, partly because the rain was so heavy that all the photo would have shown would have been water streaming down the lens of the camera, and partly because we were simply in survival mode – get the transects done and leave the area as quickly as possible. Get the transects done we did, however, despite the conditions, but this was not the last occasion when it became a case of ‘undaunted by weather’ – the motto of my father’s Coastal Command 519 Squadron responsible for meteorological flights during the war – from Wick, just 15 miles west of Munsary, as it happens – and a motto adopted after this day by the Munsary Monitoring Team…

What, however, are we to make of this body lying on the bog some days later…? All will be revealed in a subsequent post… 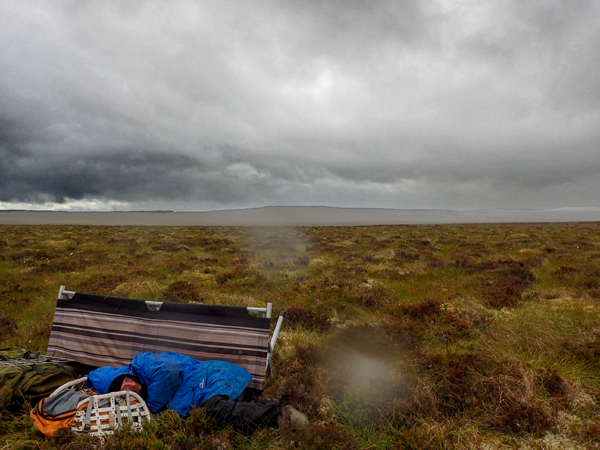