Part 2 of this blog is a pretty eclectic affair, beginning and ending with one sort of aerial predator, then involving various other sorts of aerial predator, a great number of cafe racer motorbikes, a view to die for (and I nearly did…), a chipmunk, and Jumbo. To recap from Blog Part 1, we were in Chichester celebrating a special family birthday and had enjoyed, amongst other things, some glorious landscapes and some wonderful aerial displays: 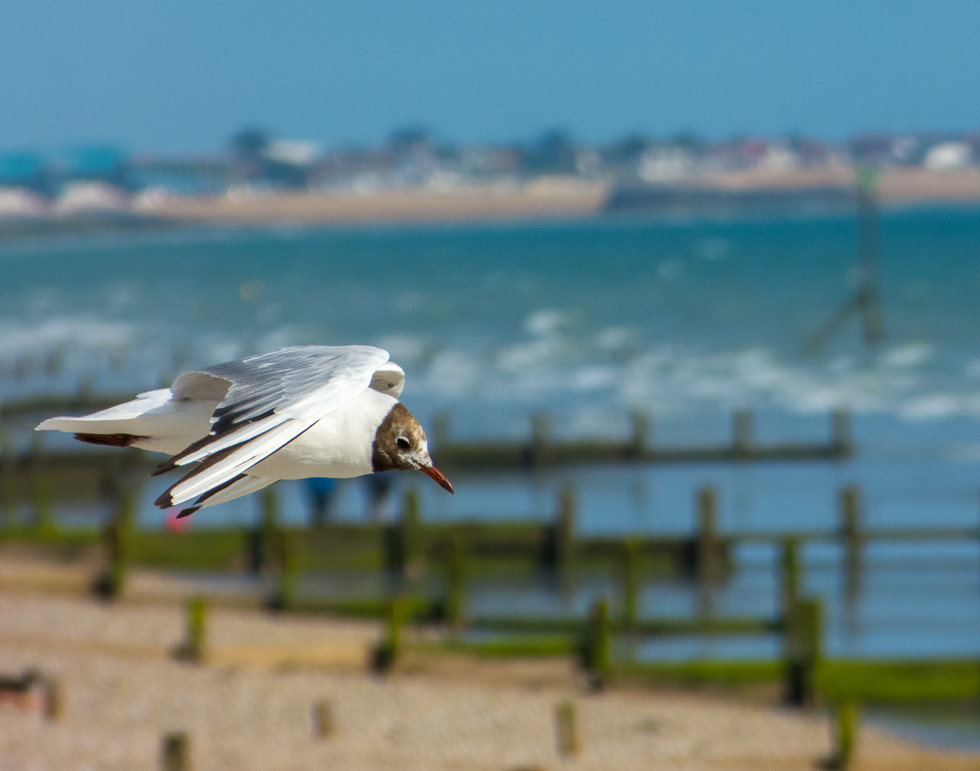 On our second-to-last evening I had spotted something rather exciting soaring round the spire of Chichester Cathedral, so early next morning I headed off to the cathedral grounds, in hope. Having settled myself down with a good view of the spire I then spent 20 minutes watching increasing numbers of people walk past the cathedral on their way to work as the city began to wake up and start the day’s business. Then I spotted what looked like a small lump offsetting the regular symmetry of the stonework pattern high up on the cathedral spire but couldn’t convince myself that it was anything significant, or anything more than a pigeon, even fully zoomed in with my camera. After another ten minutes I was just about to give up (given that we were due to visit the Historic Dockyard in Portsmouth that morning) when suddenly this lump launched itself into the sky, screaming furiously. This was no pigeon: 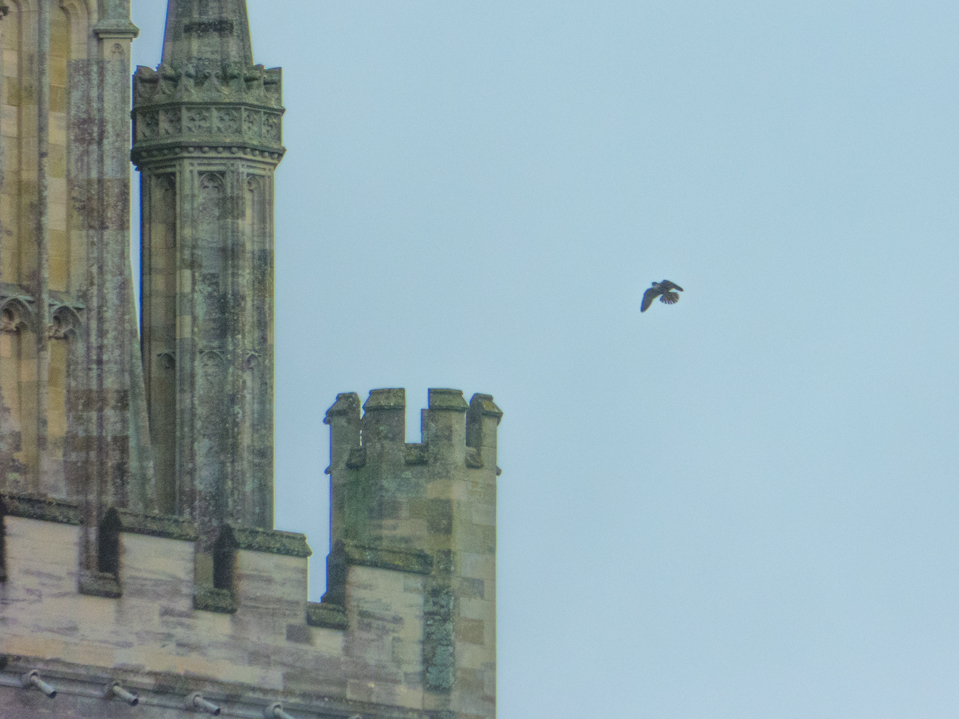 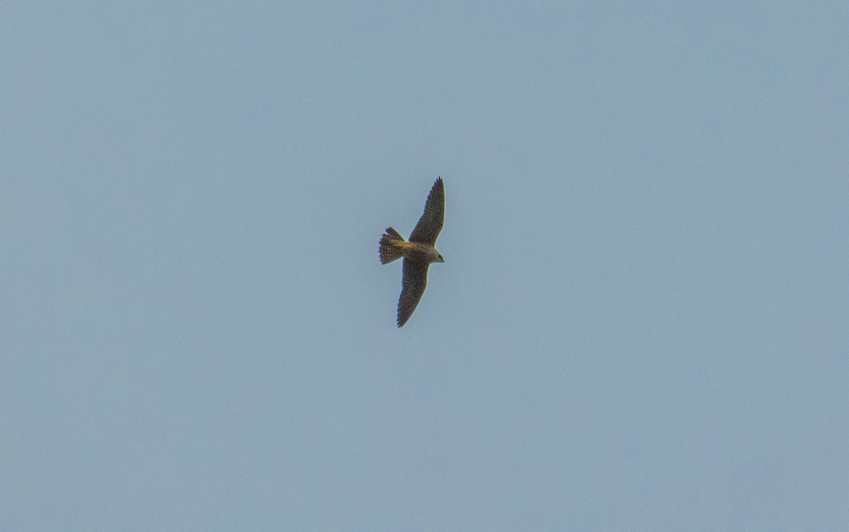 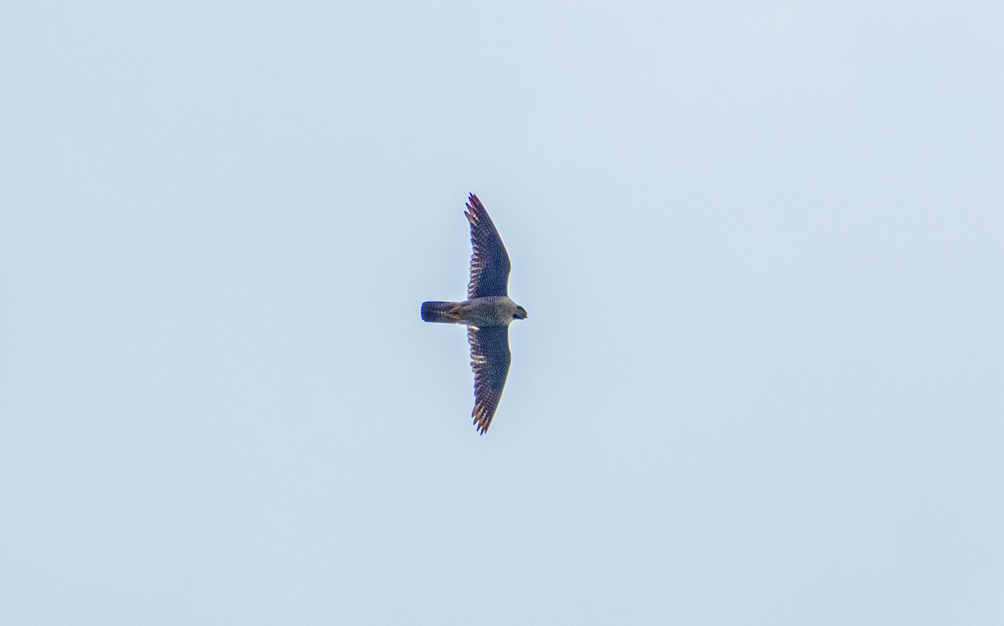 This was all I had time for before we headed off for our appointment with the excellent Historic Dockyard and some mast-climbing for daughter. Still, the nautical interlude gave me the opportunity to peruse some rigging options that might be applied to my little boat Merlin (see her tale elsewhere): 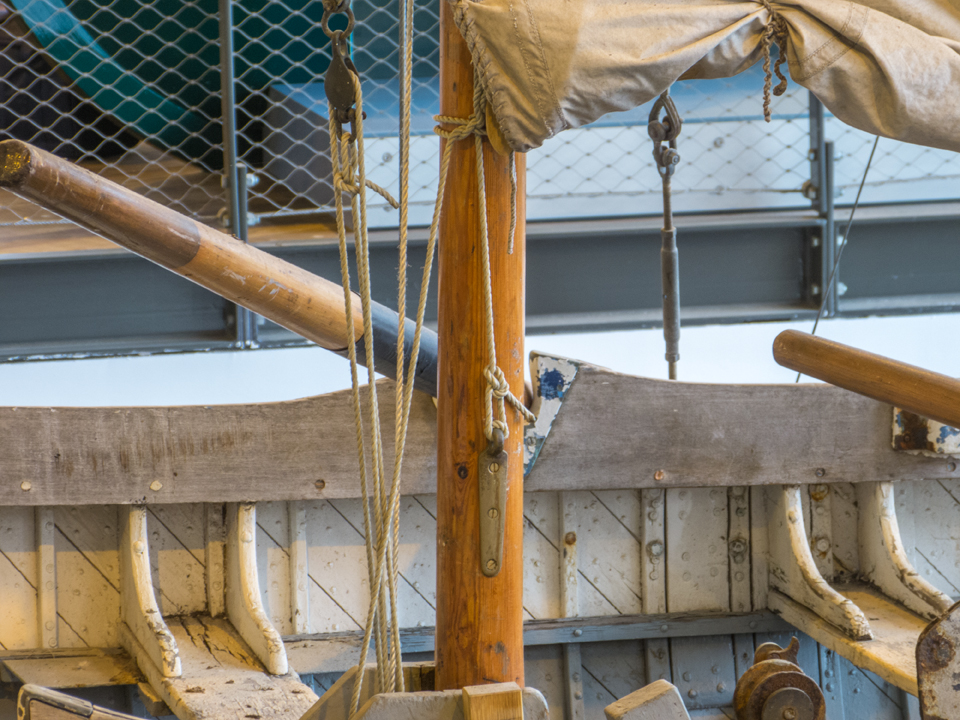 Arriving back that evening after a thoroughly enjoyable day at the Dockyard (I highly recommend the pear and almond tart in the cafe next to HMS Victory 🙂 ) I headed back to the cathedral and even as I approached I could hear the peregrine young, who had been reared on the cathedral tower, screaming like angry harpies. Focusing quickly up at the tower I was just able to catch the parent pass the prey to a youngster before the youngster flew off with its prize past its sibling: 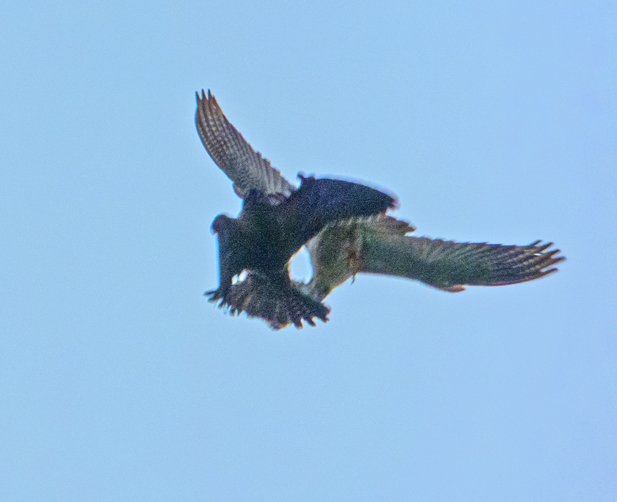 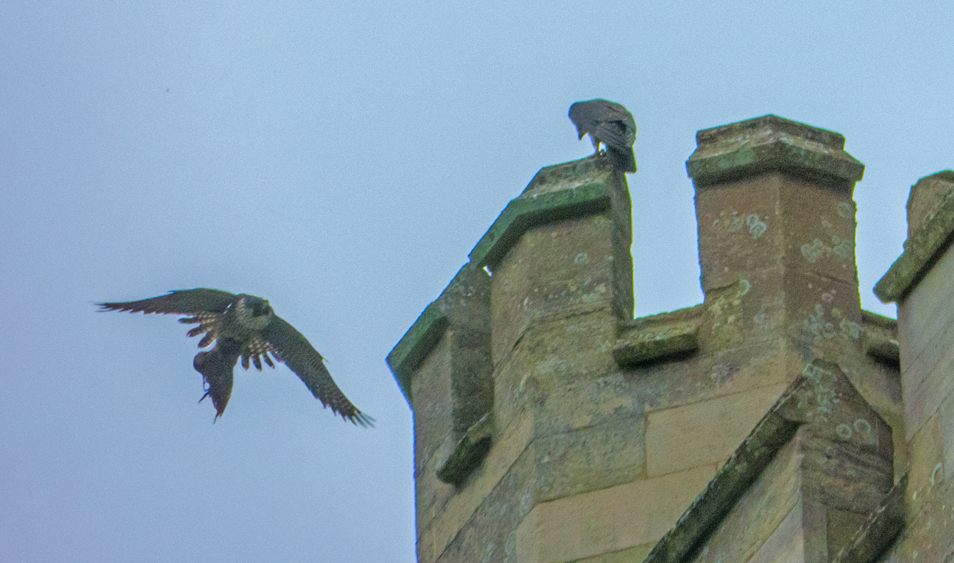 Sibling was not pleased about this, so carried out a successful ambush:

This left the original sibling feeling pretty outraged, so when the parent arrived carrying more food but proceeded to eat it on one of the tower spires, the youngster obviously decided that one ambush is as good as another: 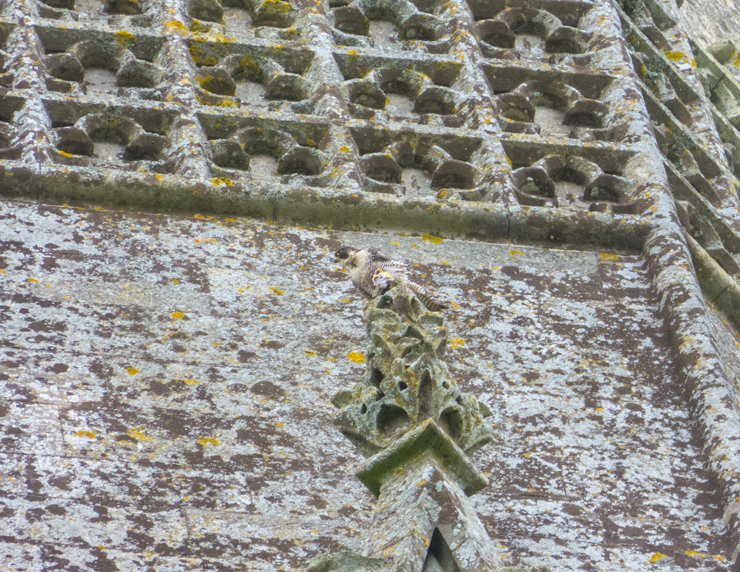 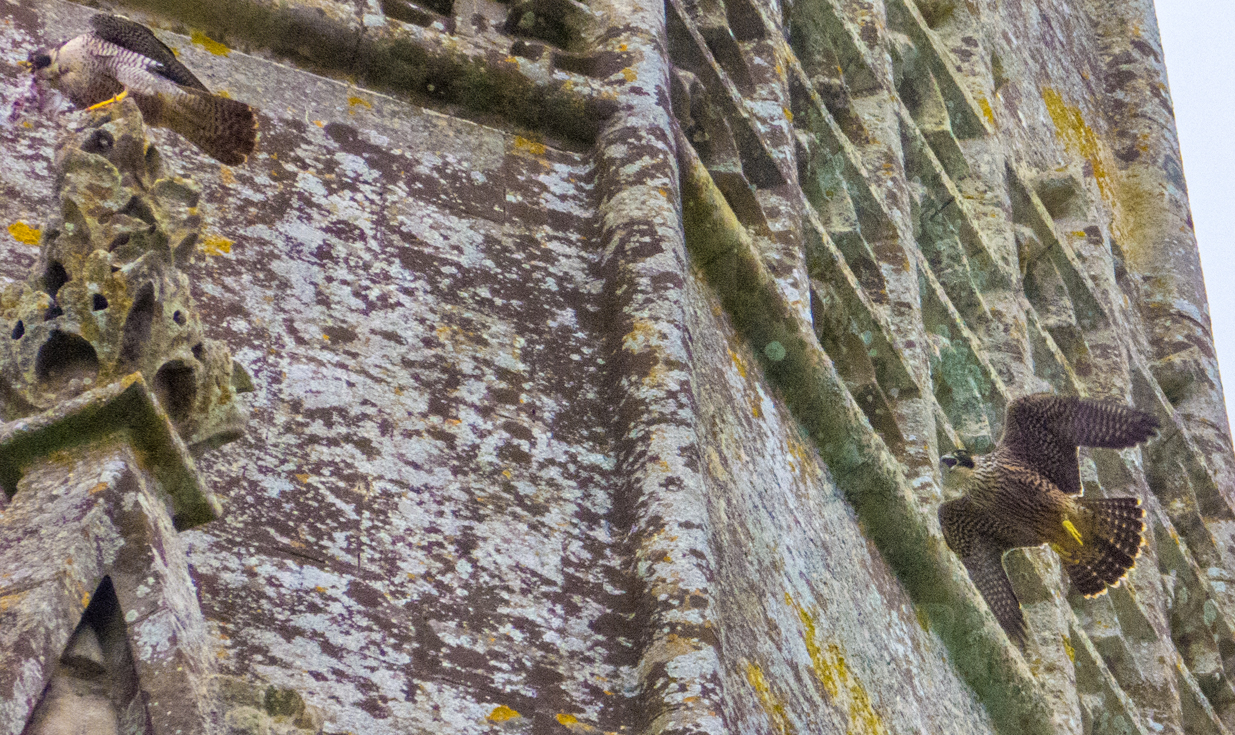 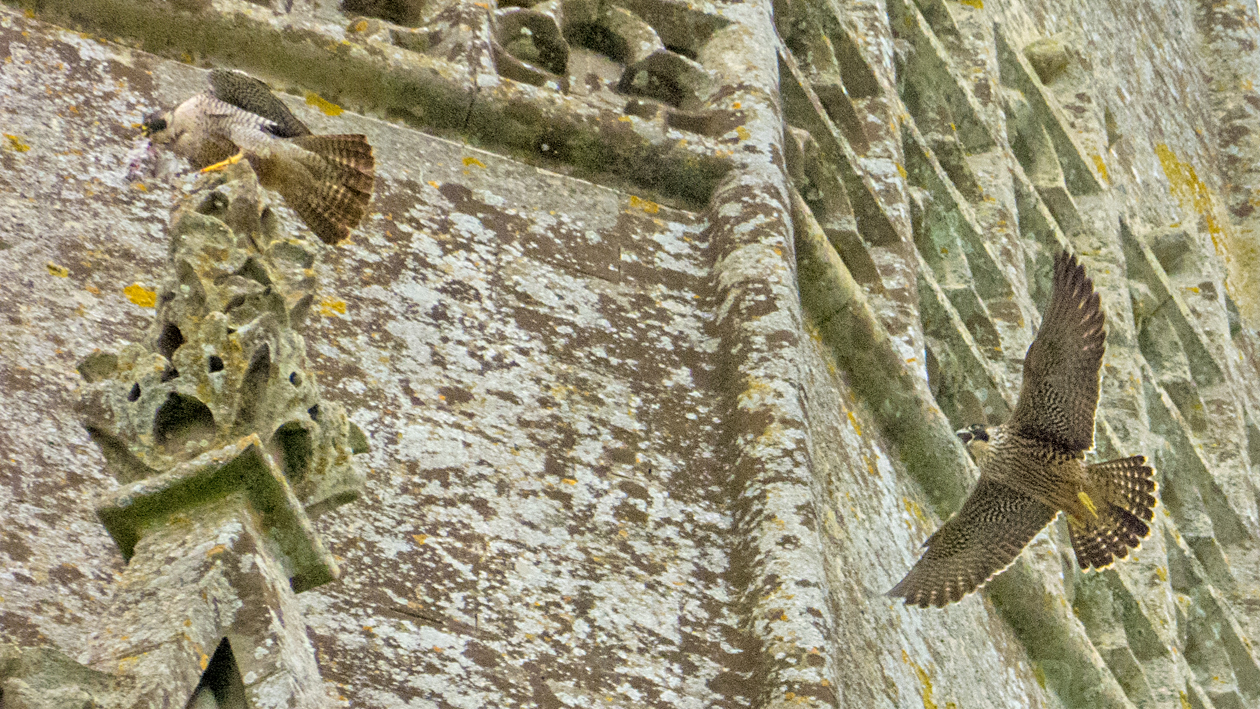 Having banjaxed the parent and fled with the food, the youngster settled on a parapet and tried to enjoy its prize, but several further attempted ambushes eventually resulted in a retreat to somewhere more obscure, thus ending my peregrine-watching for the day, and indeed it brought the curtain down on our stay in Chichester: 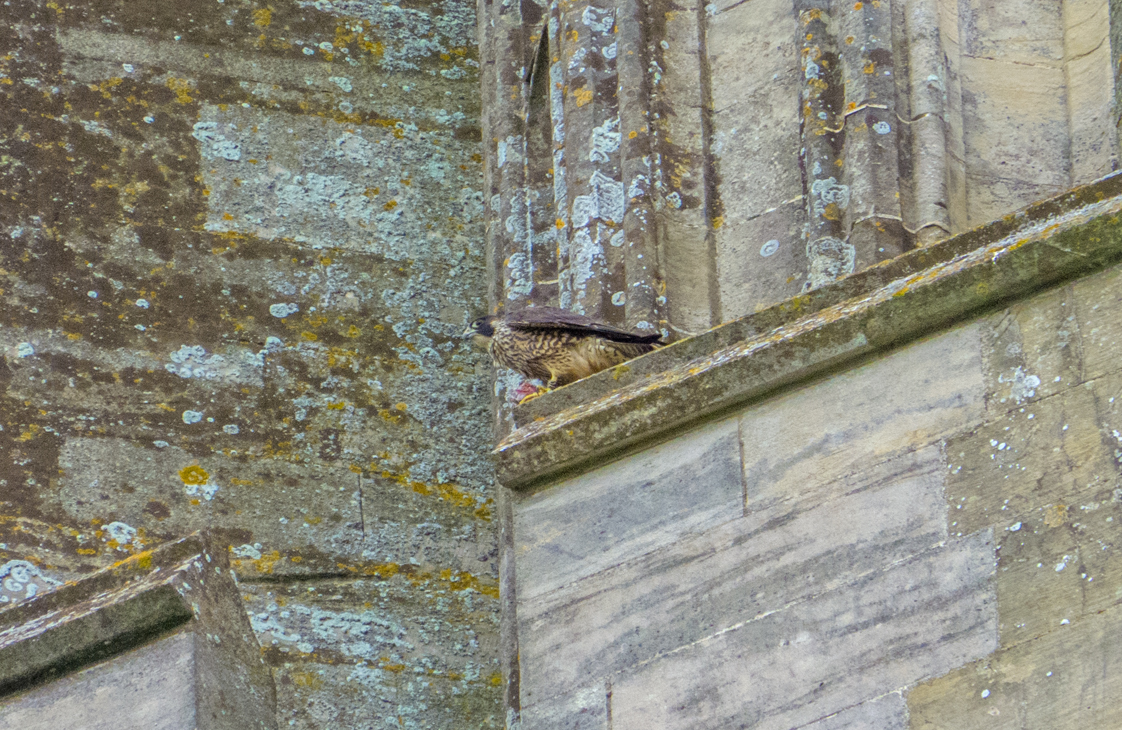 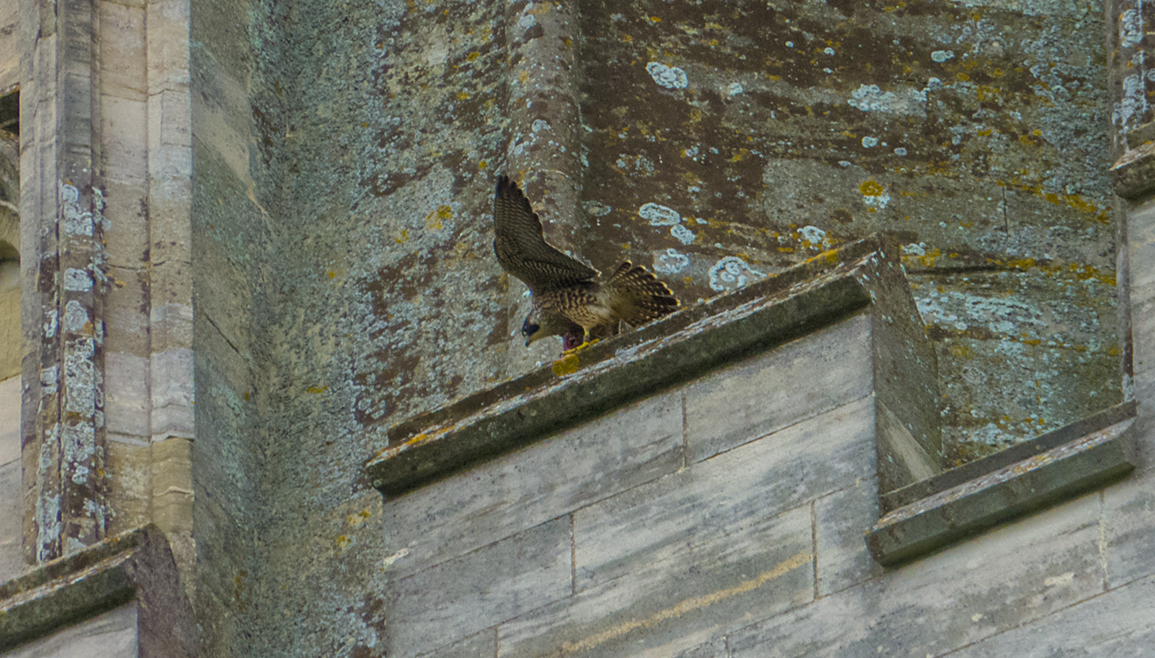 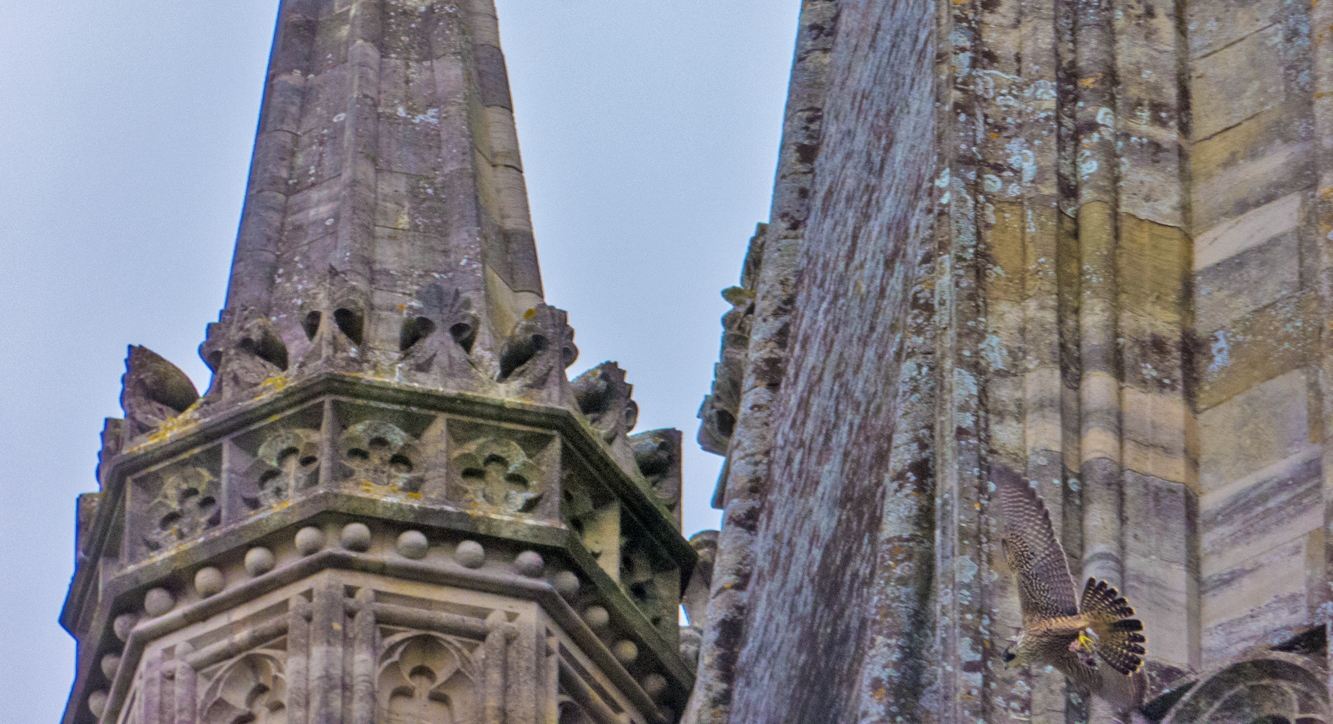 However…. so taken was I again by the view from the South Downs ridge as we drove back along it on the way home, that the following Sunday found me setting off before dawn from Colchester, heading back to Sussex armed with paints, pastelles, pencils and various essential accessories. On Google Maps I’d spotted a cafe at the end of the ridge, so I reckoned I could park there and then walk back to the view with the intention of photographing and painting it. What I hadn’t bargained on was the fact that it was a gloriously sunny Sunday and the Whiteways Cafe is a biker-meet. There must already have been more than 50 bikes of all breeds, styles and states of repair in that car park although it was still only 8 a.m. Grabbing a bacon sandwich from the cafe, I sat amidst the bikers contemplating my next move and looking for ‘classic’ (i.e. slow) models that I had once owned – a Honda and a Moto Guzzi. After an unsuccessful search – everything now is sleek, flash and, as I was to discover, very loud – I staggered off up the road, laden with photography and art gear. Meanwhile bikes screamed past in an endless banshee wail, making the most of the beautifully straight road as it runs along the crest of the Downs. Having arrived at the view which had dragged me half way across the country yet again…

…I was disconcerted to find that there was the narrowest of roadside verges beyond which there was a steep drop of some seven or eight feet down the road-bank into the field below. The bank was smothered in a thick tangle of traveller’s joy (Clematis vitalba), bramble (Rubus fruticosus) and nettle (Urtica dioica). Carving out something of a precarious perch for myself within this undergrowth – indeed only held in place on the bank by this tangle – there was no denying that the view was glorious, both in front and behind:

Unfortunately not only was I balanced like a tightrope walker, I was also inches from the road along which seemingly hundreds of bikes were thundering and screaming past, all day. It felt like trying to sit and paint serene landscapes while sitting in the middle of a Formula 1 race. Soothing and lyrical it was not.
My first attempt at capturing this landscape turned to dust, quite literally, when the pastelles I was using (a HomeBargains special) just crumbled across the paper resulting in something less than light and lyrical: 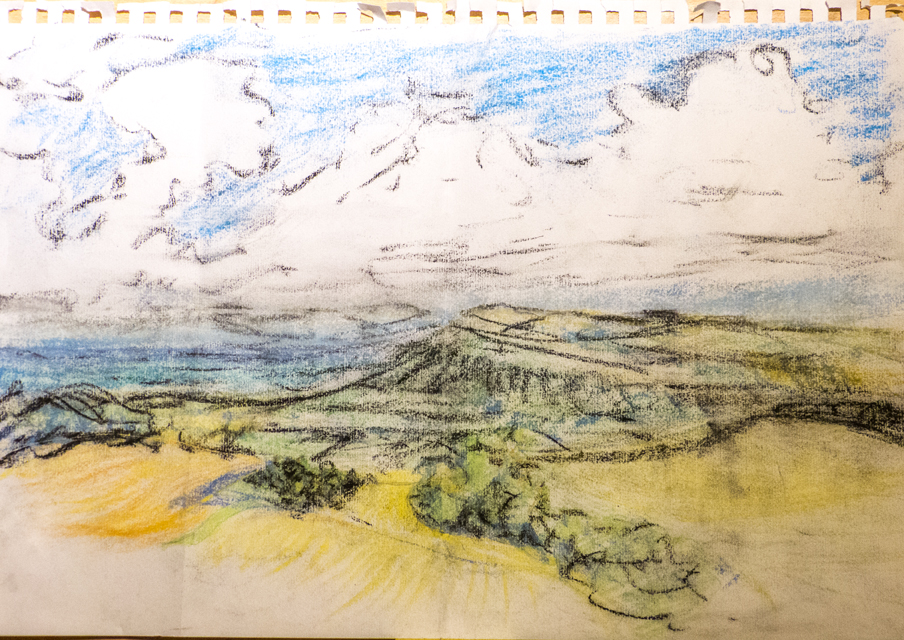 So I turned to my paintbox and a new sheet of paper. Word of advice: Never under-estimate the potential impact of a gift given to a seemingly un-enthusiastic teenager. This painting tin was given to me on my 14th birthday. It’s still my favourite and still being used almost 50 years later: 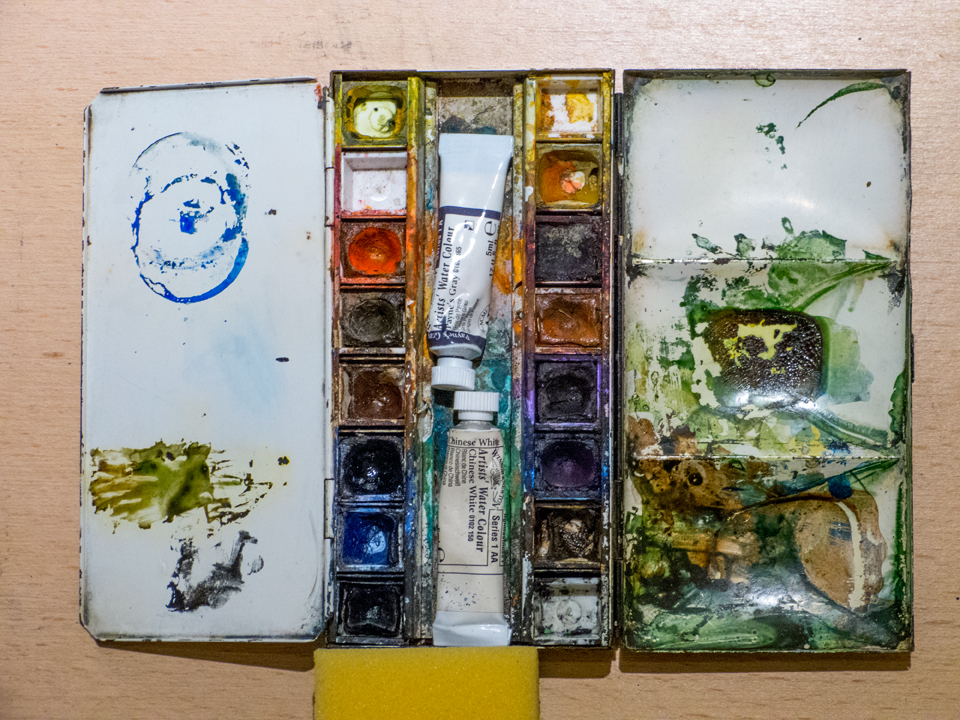 Now balancing paints, water, brushes, drawing board and the occasional sandwich while perched precariously above a seven-foot drop was not as conducive to great art as one might wish, and trying to shut out the roaring banshee of the bikes hurtling past a mere three inches from my left ear was proving increasingly difficult: 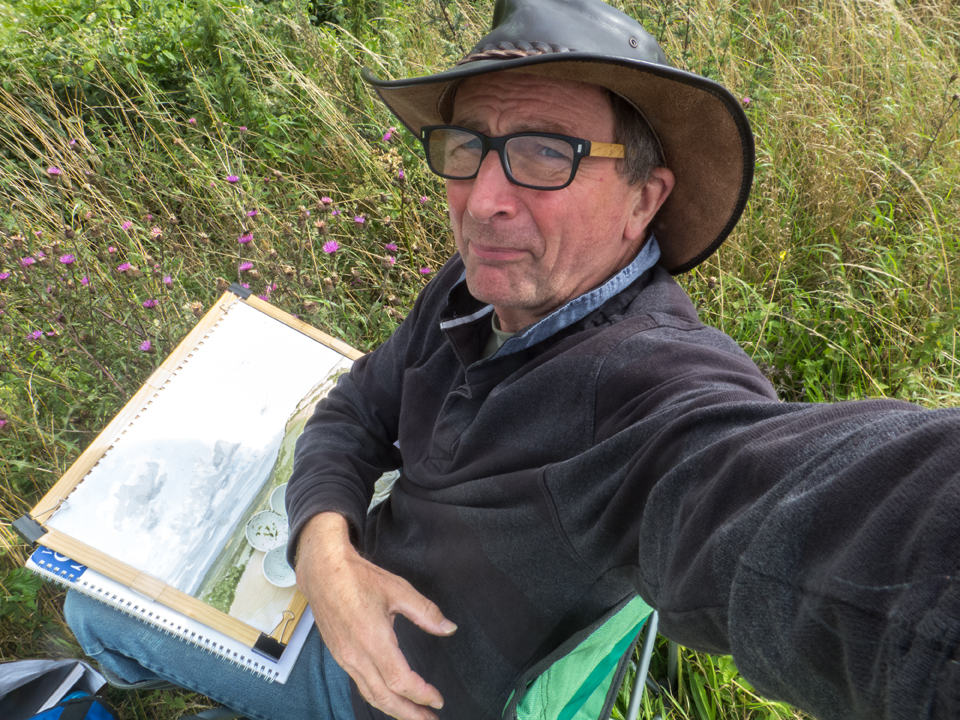 I suppose the result was inevitable. A cafe racer who had been up and down a few times came roaring back, apparently this time aiming to pass as close to my little camping chair as he possibly could. The noise, and the shock, resulted in me doing a nose-dive straight down the bank in a tangle of traveller’s joy, paints, nettles, painting water, brushes, brambles, startled artists and folding camping chair. I still bear the scars on my shin, but fortunately the tangle of vegetation acted as something of a safety-net – albeit a prickly and stinging net. Having disentangled myself and now being down in the field, I thought I might as well make the best of a bad job and take a panorama photo from the edge of the maize stand, looking over a rather beautiful poppy field:

Walking round and up onto the verge again, I was able to collect my scattered thoughts and brushes and paints, finally completing the sketch an hour or so later: 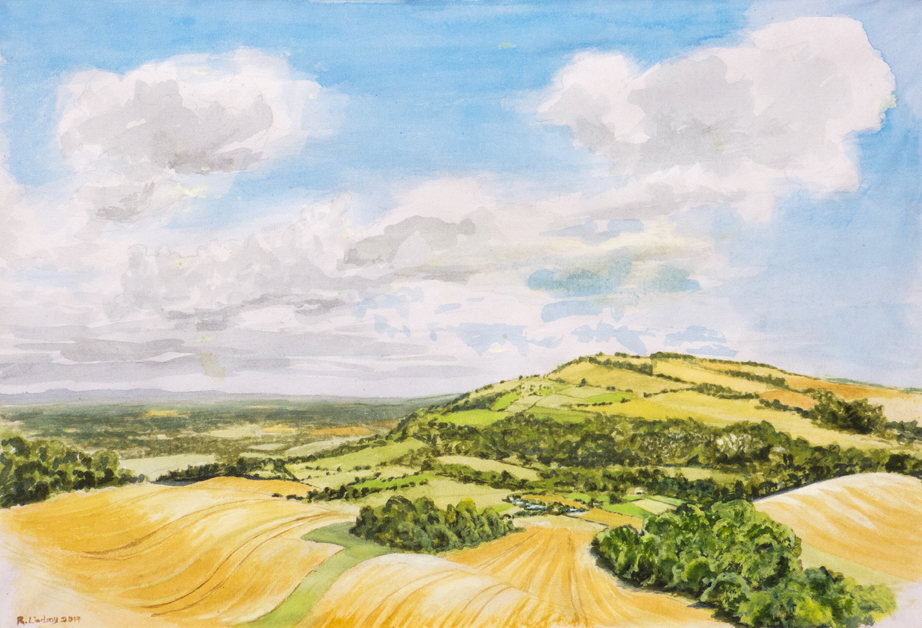 The following weekend we decided to go back to Chichester again – you can tell that we were all rather taken with it – and we decided to visit the nearby Tangmere Military Aviation Museum, based on the old RAF Tangmere Sector Station – one of the key stations during the Battle of Britain: 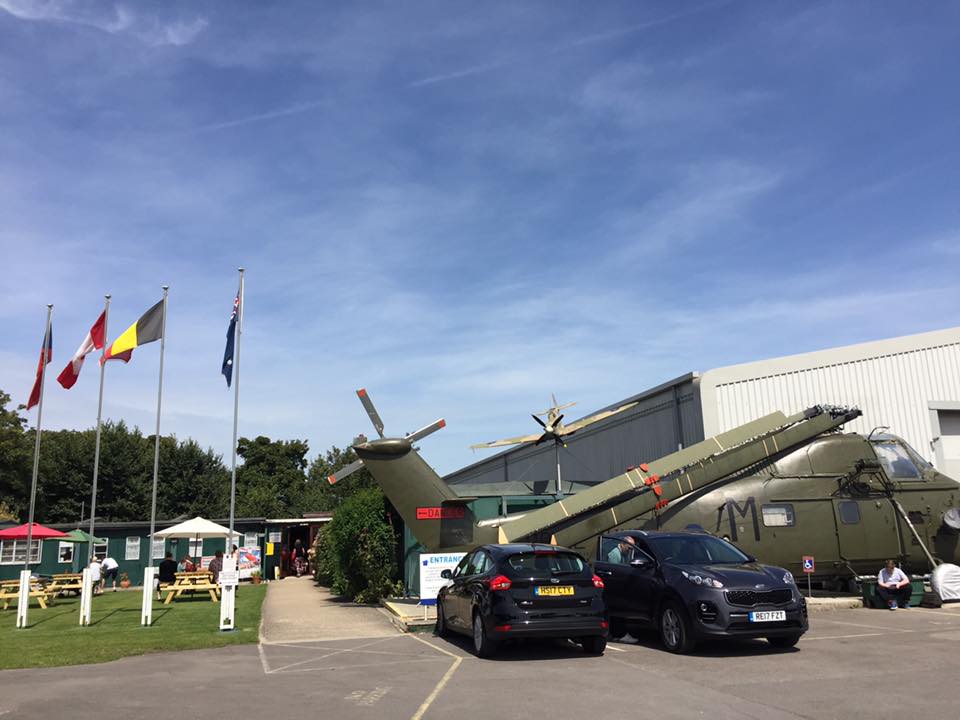 It proved to be one of the best, most involving, and in some ways most moving, aviation museum I’ve ever visited. Daughter enjoyed flying in a couple of simulators then fiddling with all the knobs, dials and levers on various radio sets, as well as having a go at morse code, while I discovered a Link Trainer – a flight simulator from the war and immediate post-war, used to train pilots in blind flying and navigation. The ‘crab’ thing on the left tracks your flight progress across a chart on the chart table. I was in charge of the link trainer in our CCF at school, so it was delightful to see one in full working order again: 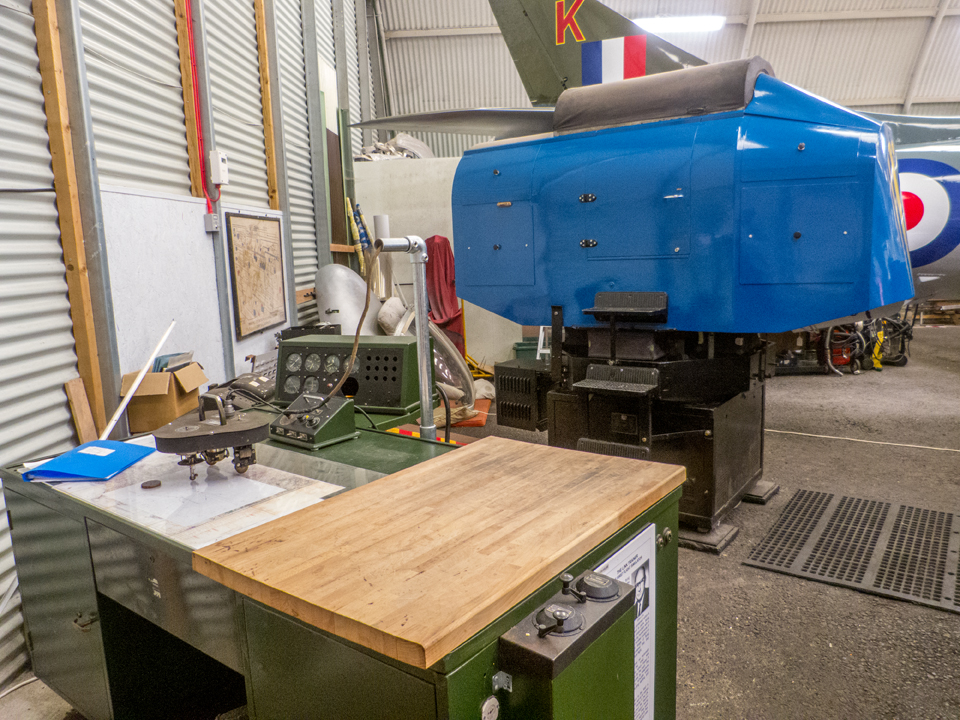 I also had the opportunity to sit once more in the cockpit of a Chipmunk trainer (minus wings). I had last flown in one of these lovely little planes nearly 50 years ago at RAF Woodvale – oddly enough, the same type of aircraft and the same RAF station that is the very final entry in my father’s RAF Pilot Log Book at the end of the war… 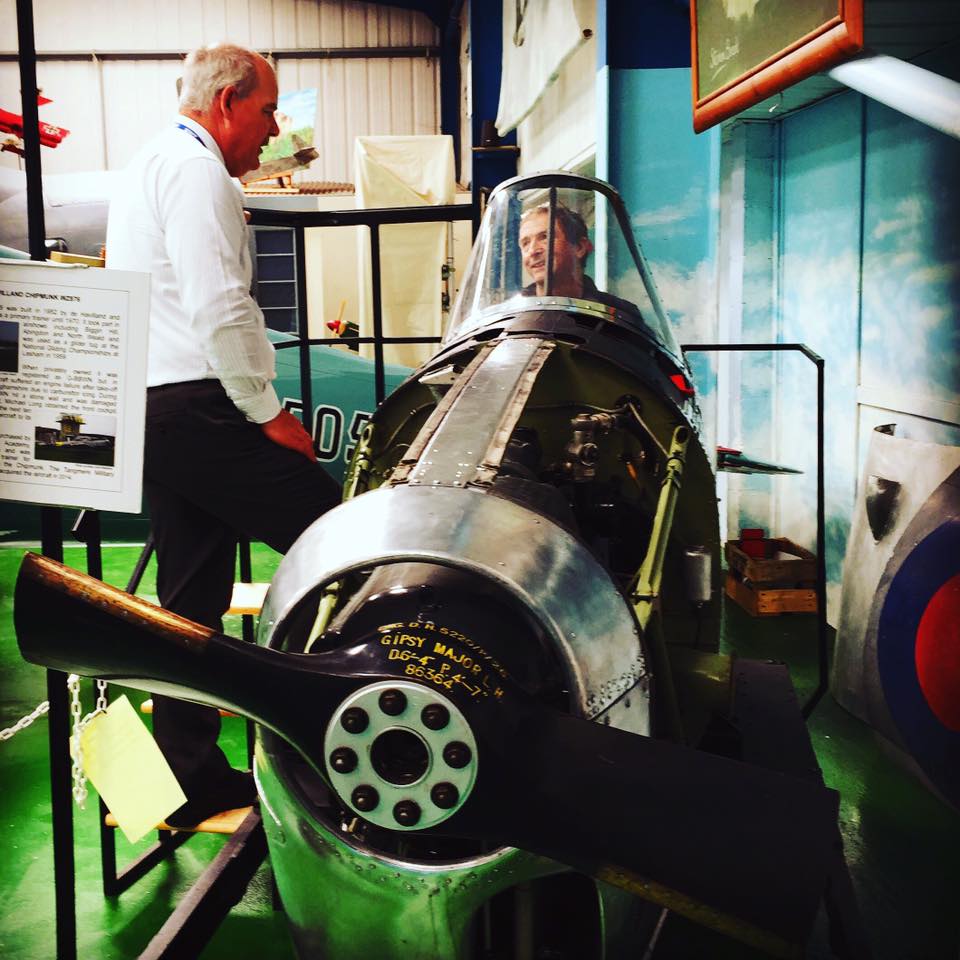 By far the most moving things I found, however, were two framed pictures. They contain the collected signatures of all RAF pilots who flew in the Battle of Britain. What shocked – and moved – me was just how few there were, yet they changed the course of the Second World War: 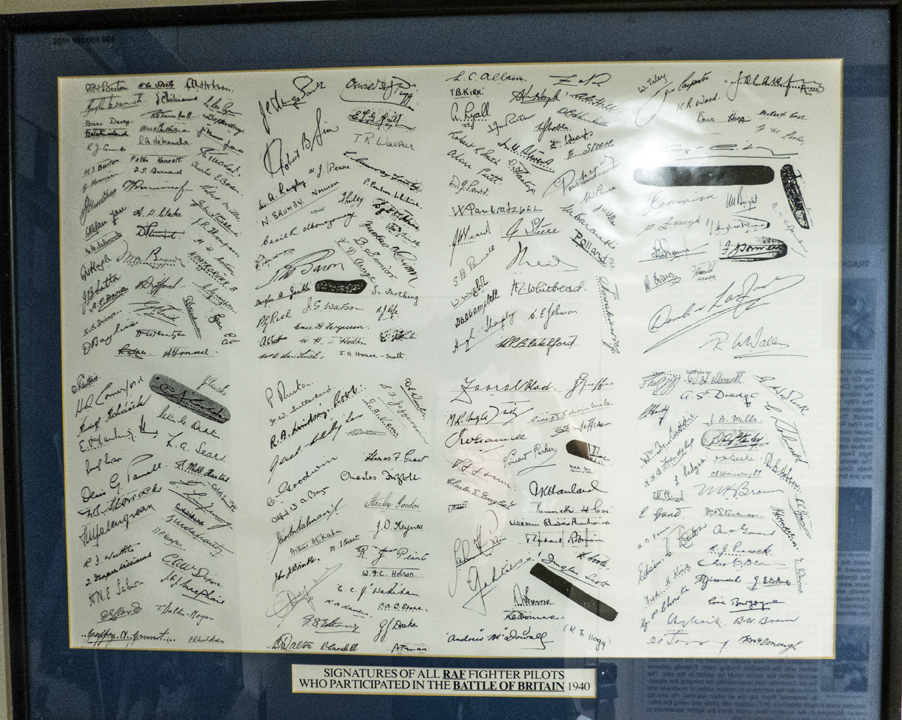 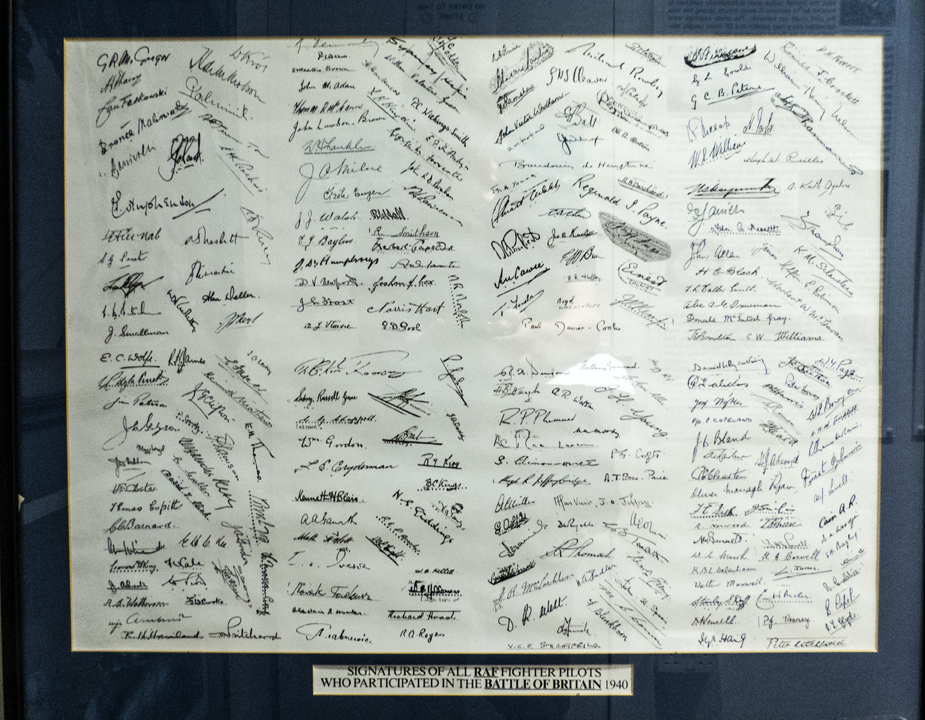 Afterwards, heading into Chichester, we had a very pleasant afternoon, and I discovered that the city’s patron saint is St. Richard, who looks pretty severe in his statue but he not only argued with the king on behalf of the poor of Sussex, he is also reputed to have penned the prayer that ends with some of the most famous and beautiful lines of poetry in the English prayer book: 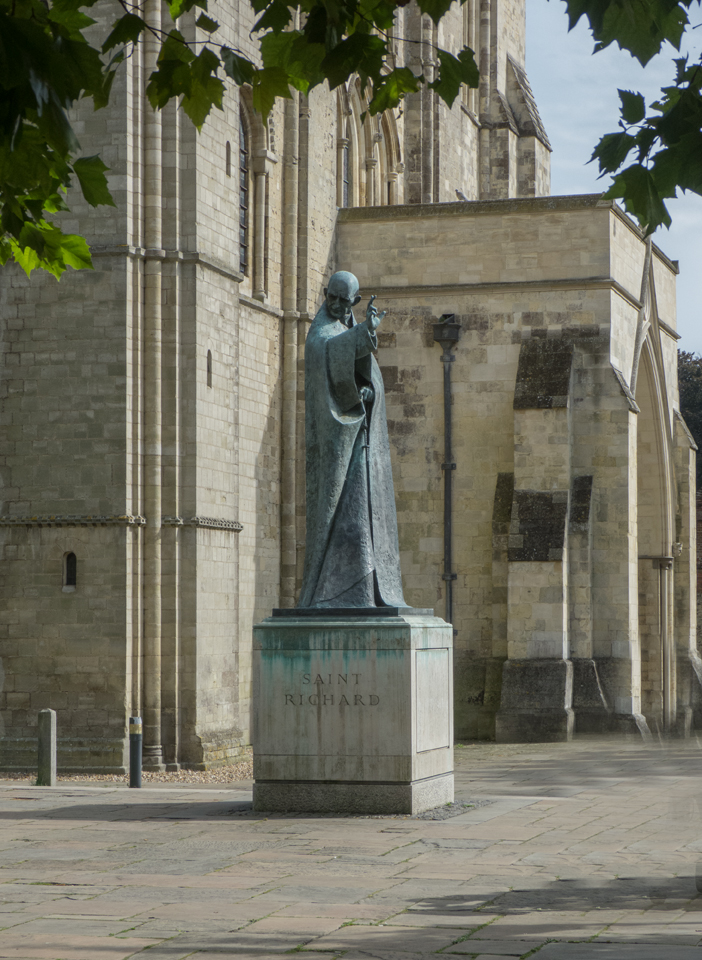 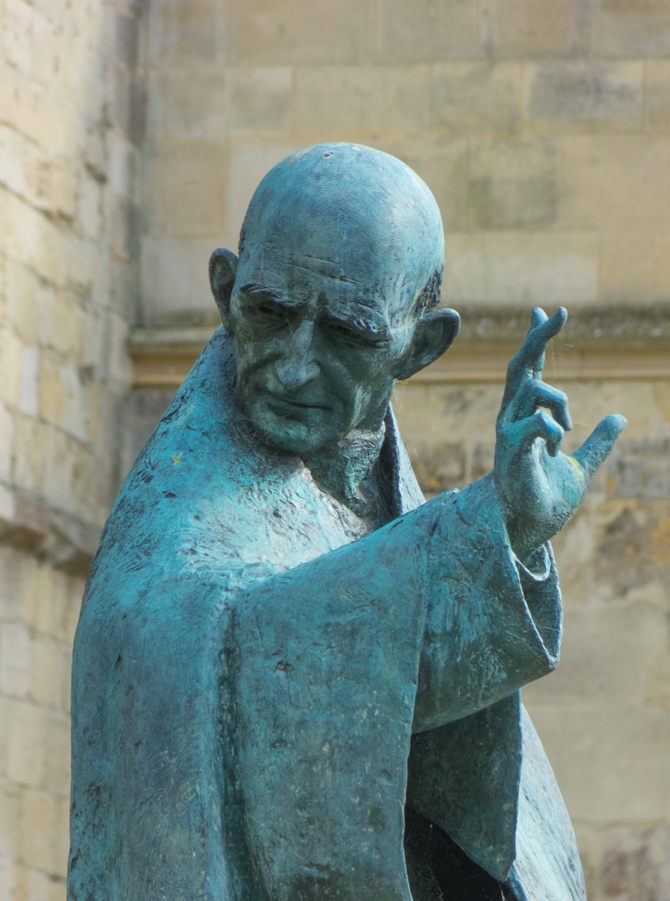 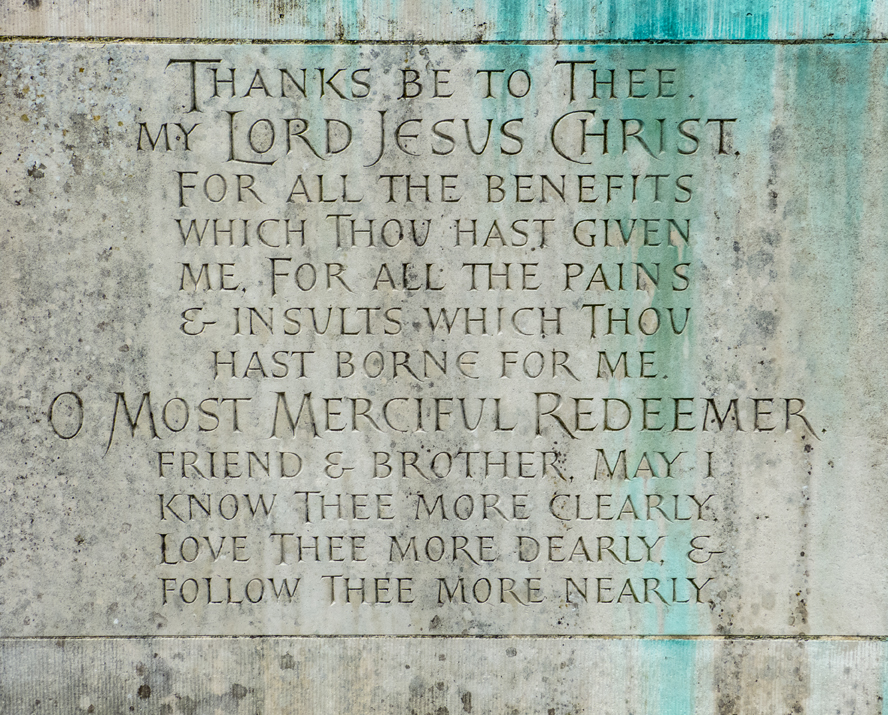 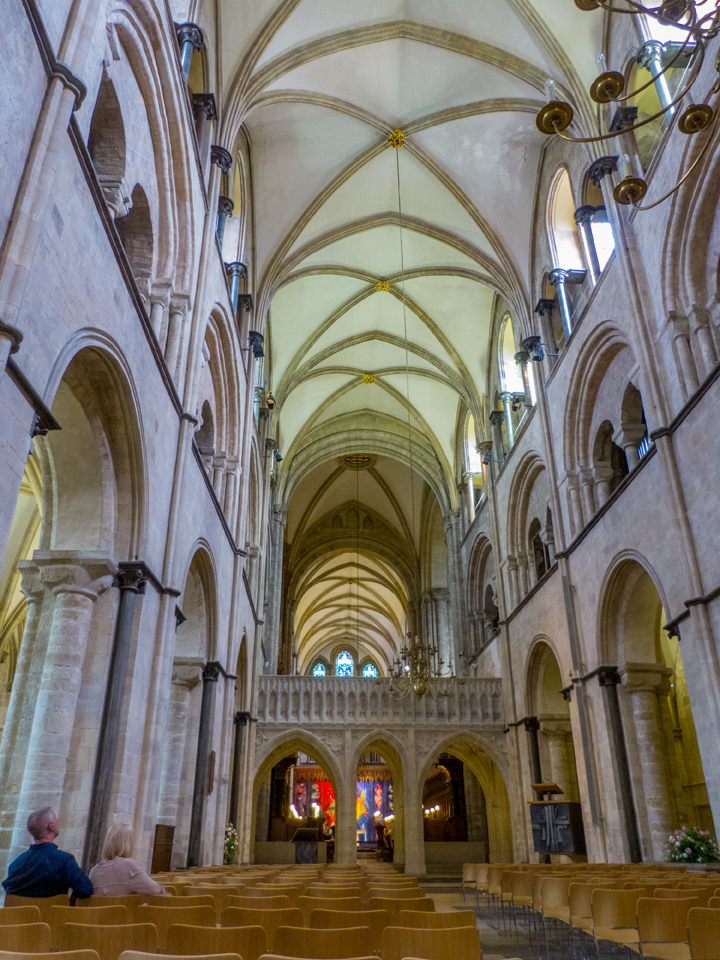 Just a week later, back in Colchester, daughter was taking part in a film-making school which was filming in the shadow of ‘Jumbo‘ – the great Victorian water tower which sits right on the crown of the hill on which Colchester is built. When we arrived to collect daughter, the film-school people casually mentioned that filming had been somewhat interrupted by a horde of birders looking at a peregrine on Jumbo…. More peregrines..? Surely not… Then sure enough a white, not brown (as it would have been had it been a kestrel), shape appeared on a ledge high up on Jumbo. Zooming in on this white blob with the new (well, second-hand) Lumix FZ1000 I had bought 1 hour earlier to replace my poor battered, faithful but now-cranky Lumix FZ150, the very first photos in this new camera were indeed of Colchester’s own peregrine… 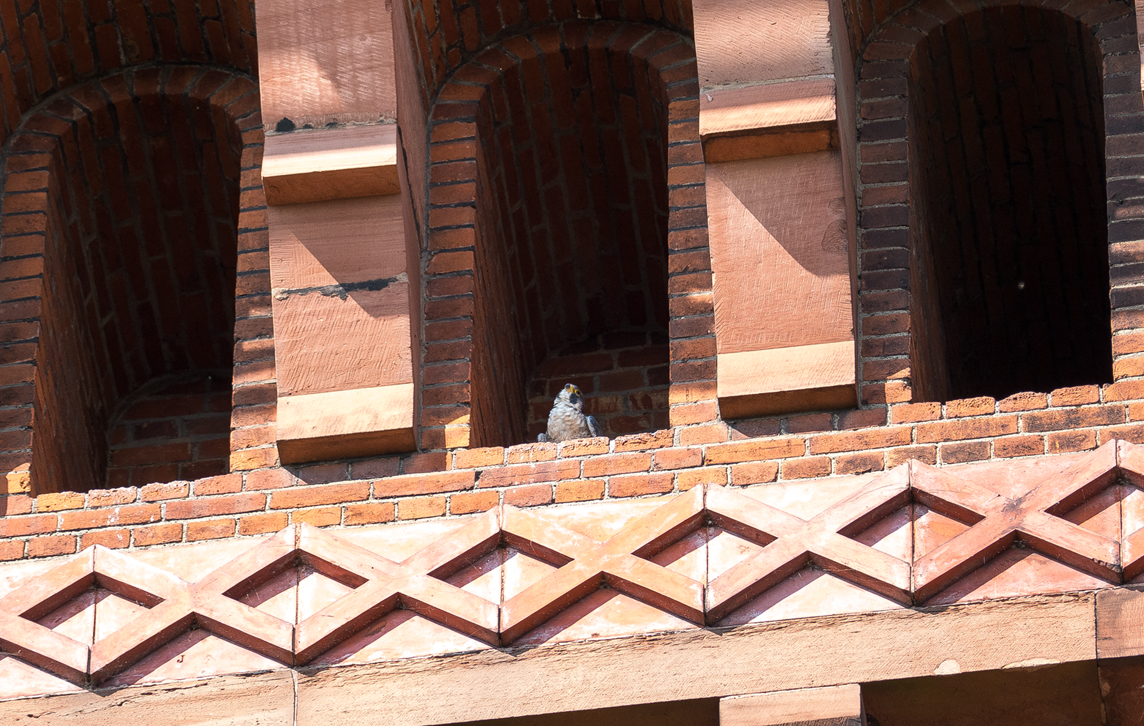 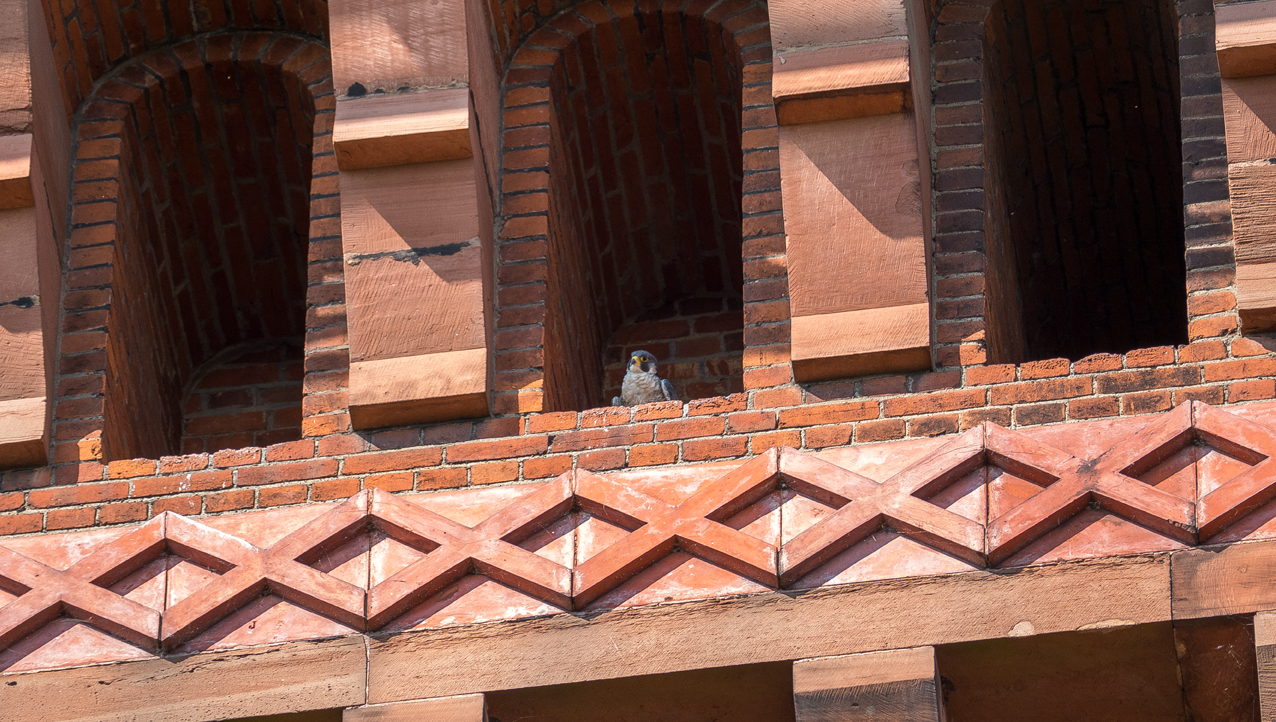 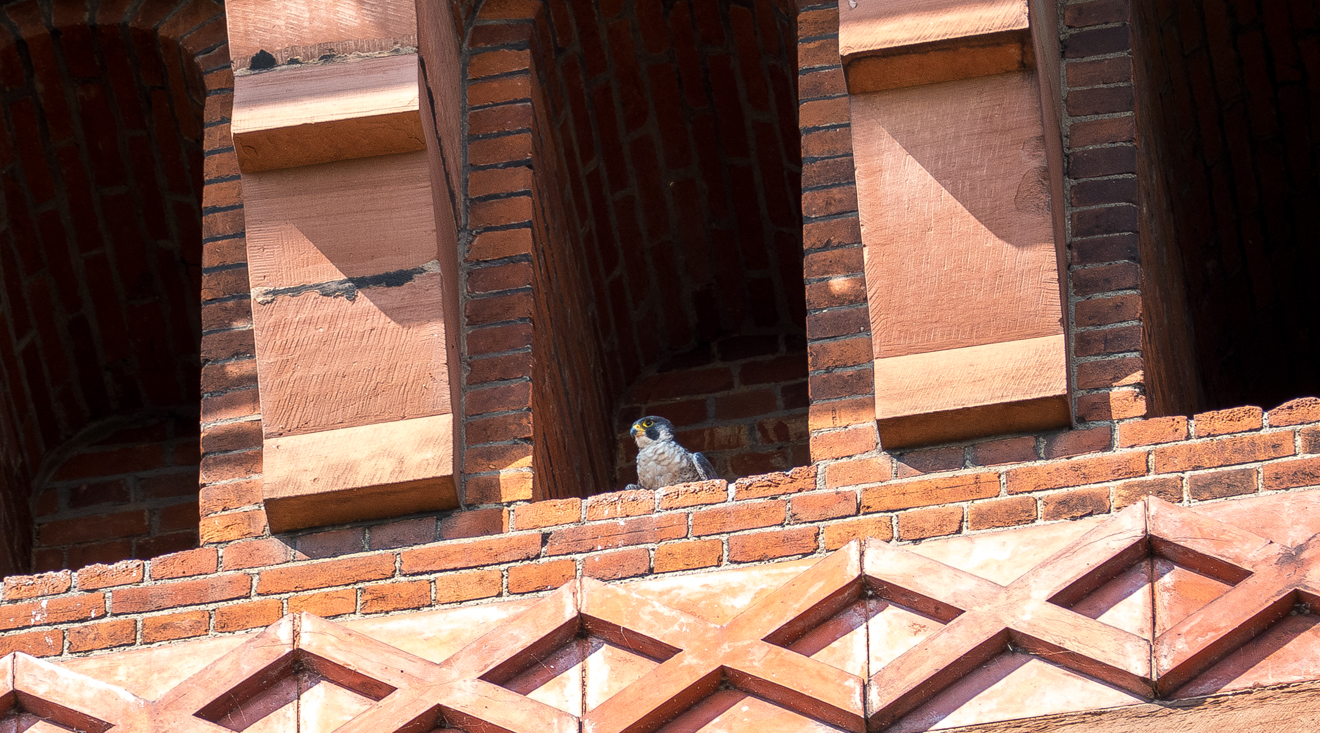 So now the summer adventures are over – a summer full of aerial and aviation surprises.

Thoughts are already turning to the Minories Christmas Market and the Minories and FirstSite Christmas Makers Market…. Look out for announcements soon about cards printed from my artworks and photography… 🙂