It’s two months now since the launch of Moors for the Future’s Community Science Project and three months since I packed a fresh salmon steak into a bag of Sphagnum bog moss to be opened during my talk at the launch (see earlier blog) in order to demonstrate the preservative power of sphagnan, a chemical released from the tissues of Sphagnum bog moss.  Having put the steak back in the Sphagnum at the end of the day, I brought it home and left it in our small plastic greenhouse, in the shade beneath a work-bench.

It was with some trepidation and with some serious thought given to whether I should wear an industrial face-mask that I decided to open up the Sphagnum bag the other day to see what had happened since then.  Actually I had two bags of Sphagnum because I had taken another up to Hathersage to show what the contens of a WW1 First Field Dressing consisted of, and I couldn’t now tell which bag was which.  I opened the first bag gingerly, at arm’s length, and immediately decided that this could not be the bag because there was no stench and no obvious sign of the salmon steak.  I therefore opened the second bag, also at arm’s length, but was surprised to find that again there was no foul odour or runny slime.  Poking around in the bag it eventually became clear that there was no salmon in this bag, so I turned back to the first one again.

Carefully working my way through the compressed Sphagnum, I finally found a somewhat compressed salmon steak (well, I had packed the bag quite tightly when I re-sealed it so it wouldn’t go off on the train home) with various bits of Sphagnum clinging to it. 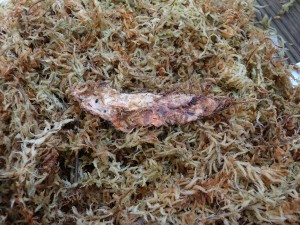 Peeling away this Sphagnum I was amazed to find that there was absolutely no odour at all, even sniffing right up to the steak, and although it looked a bit shrivelled and a little brown in places, I could imagine that it would still be edible after it was cooked – provided you were a hungry viking..!  With preservative power like this, it’s hardly surprising that peat bogs manage to preserve so much of themselves – and thus so much carbon – on millennial timescales.  A very relevant thought, given that the Paris Climate Talks begin today…