It’s been a while because things have been fairly busy for the past few months, but although there have been no posts, the photo archive has continued to accumulate. This includes the usual commuter photos following the changing landscapes and seasons between Colchester and London, but there have also been longer trips to western Scotland, Edinburgh and Chichester. I’ve decided to work in reverse order and post one of the most recent trips first – a visit to Langholm Moor for the IUCN UK Peatland Programme and the Crighton Carbon Centre in order to look at ways of restoring the carbon-capturing capacity of the blanket bogs on this estate. The details of the visit itself – fascinating though it was – are not for this blog, although I do want to heap praise on the estate, the Crighton Carbon Centre and the IUCN UK Peatland Programme for the enthusiasm with which the peatland restoration programme is being approached. This blog, on the other hand, captures the landscapes and cloudscapes – and weather – which were encountered during the train journey between Colchester and Lockerbie, plus a couple of landscapes from around Langholm Moor itself.

The route involved going via London, but there were no opportunities for photography during the journey between Colchester and London, so the landscapes begin north of London, on the Virgin West Coast Line. The weather had been typical of a British summer – i.e. wet and windy – but fortunately the featureless nimbostratus weather had drifted off east towards the continent, leaving a more broken, and therefore more dramatic, sky as we sped north-west past Rugby. I think the brown stalks so widespread by this time of year may be oil-seed rape after harvesting.  Meanwhile the wheat had yet to be harvested: 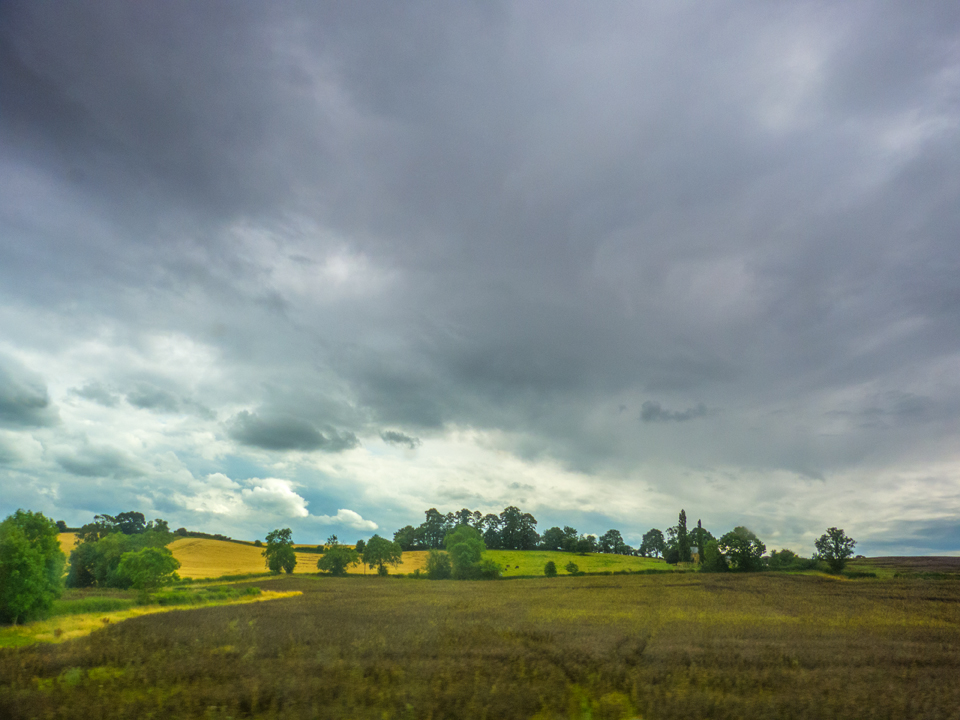 The powerful vortices associated with wind and rain had flattened extensive parts of the various wheatfield crops, and the threatening sky hinted at more to come. 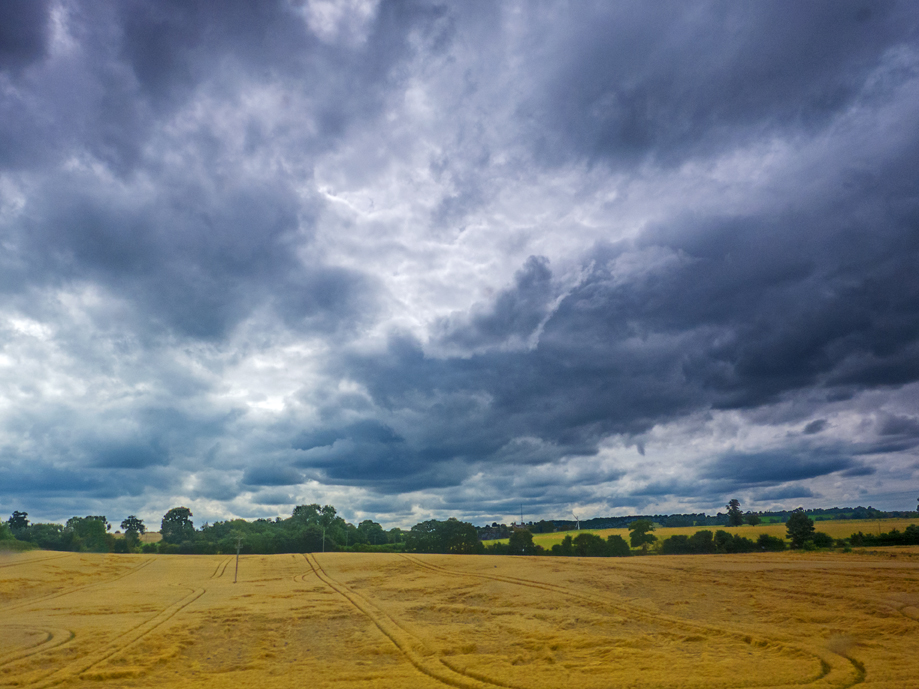 Further north it seemed that the wheat had not suffered so badly, although the skies were equally dramatic. 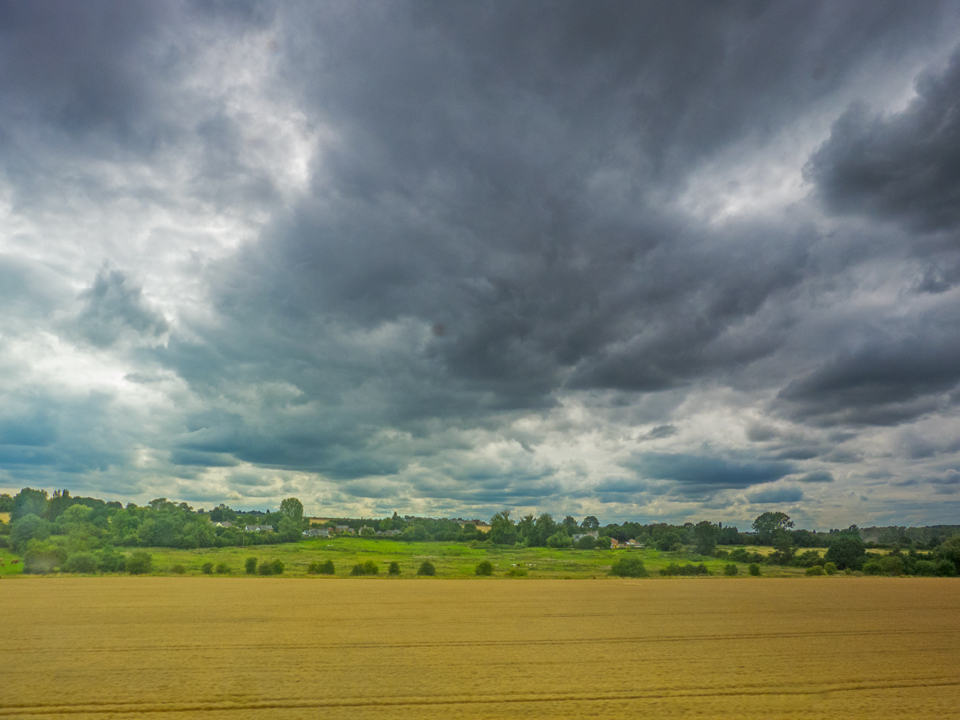 Indeed it looked as though we were heading towards the heart of the storm at this point. 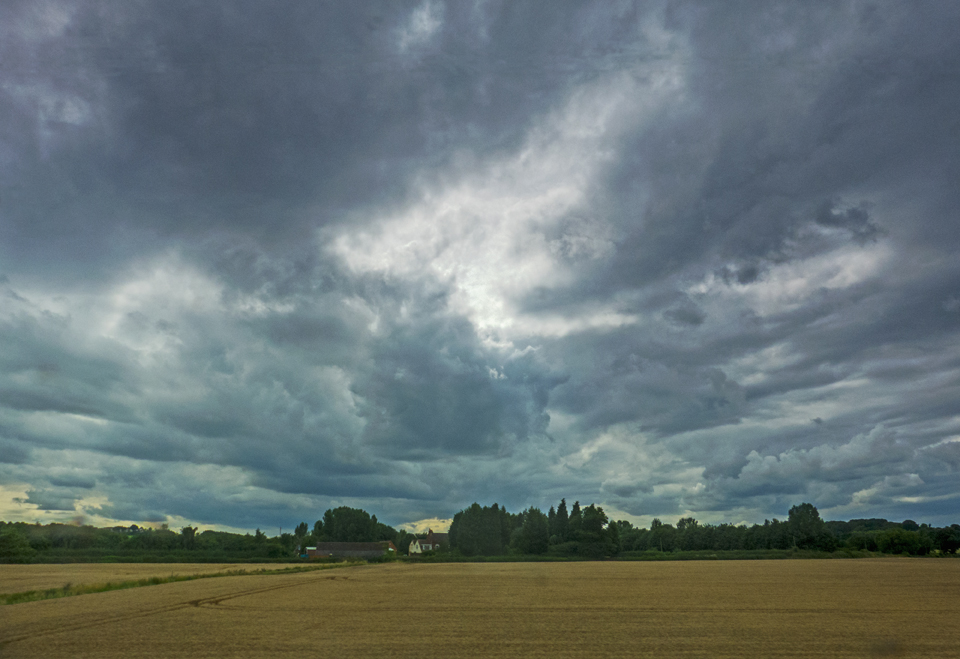 Then abruptly the sun broke through and there was, albeit briefly, blue sky above. 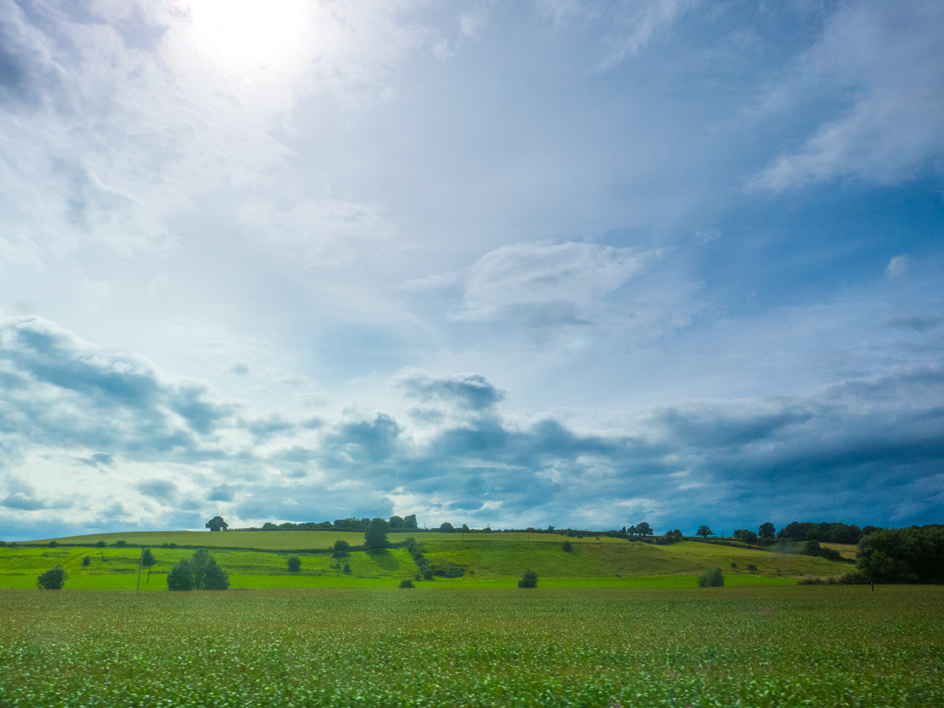 Just as quickly it vanished again, as though we’d gone through the calm eye of the storm, and the dramatic skies returned. 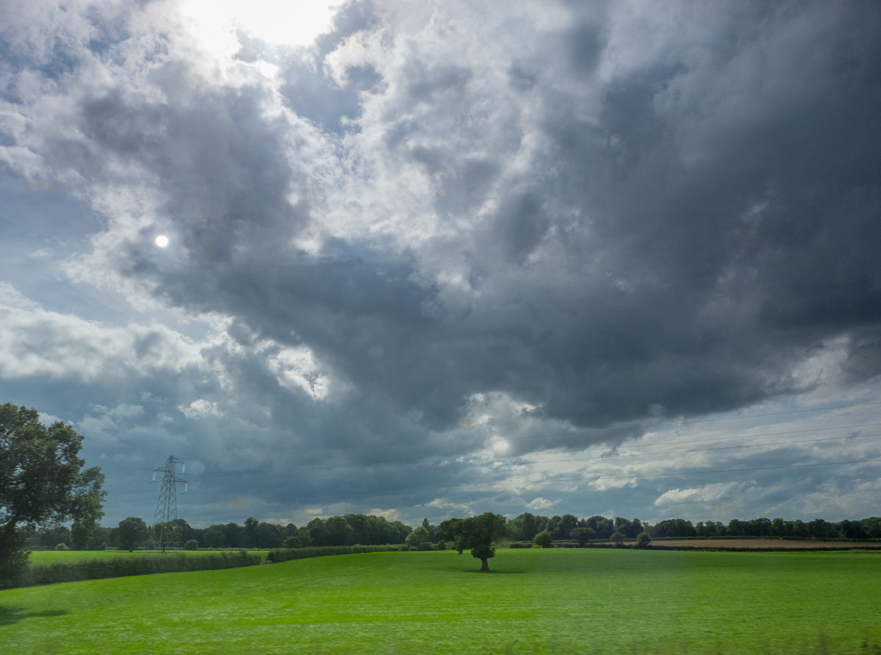 Then as we approached Oxenholme and Kendal, gateway to the Lake District (where my career started back in the 1970s), the skies abruptly cleared and we were bathed in glorious sunshine. Picture-book stuff: 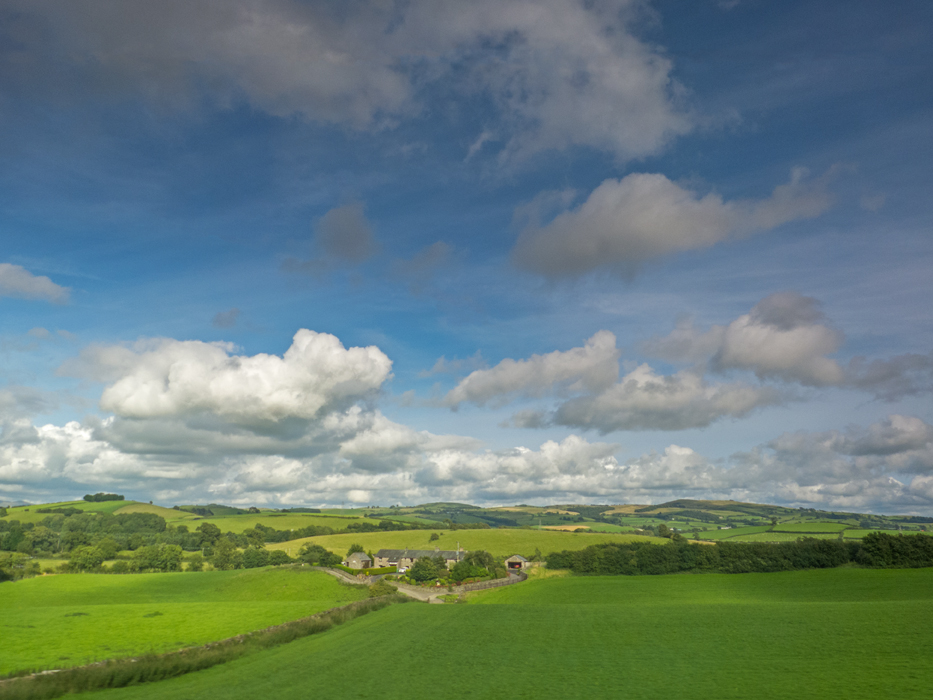 The line wound round the hills heading up towards Shap and Penrith, mostly giving opportunities for views to the north and north-west. Due west generally meant photographing directly into the sun, limiting the opportunities for photographs through the train window because any dirt or scratches on the train window simply turn into glaring star-bursts which flood the scene and make for interesting artistic images but lousy landscape photography. Every now and then, however, the sun would disappear behind a small cloud and a view due west was possible. 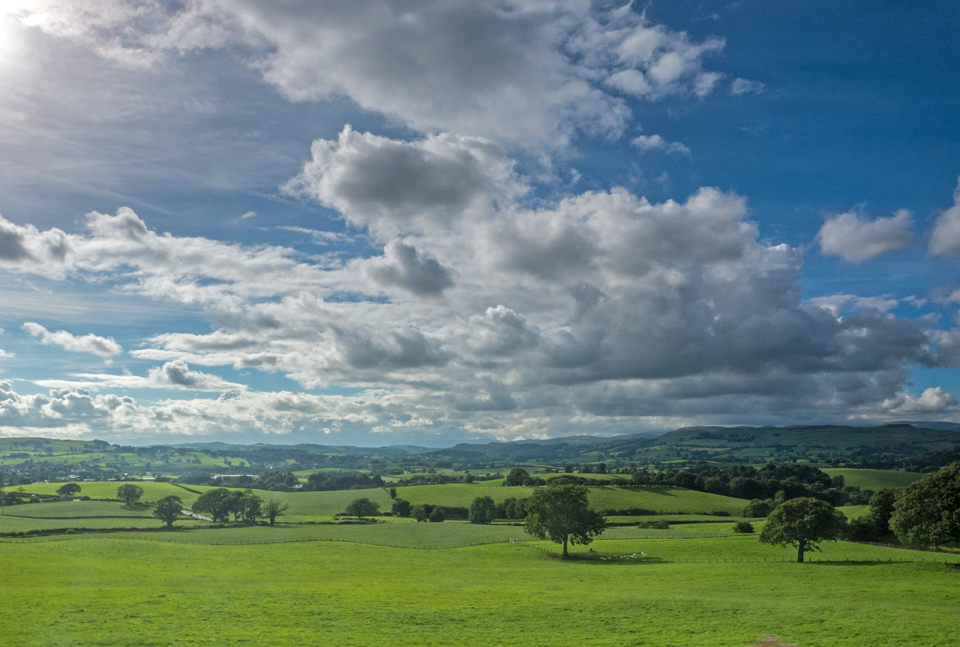 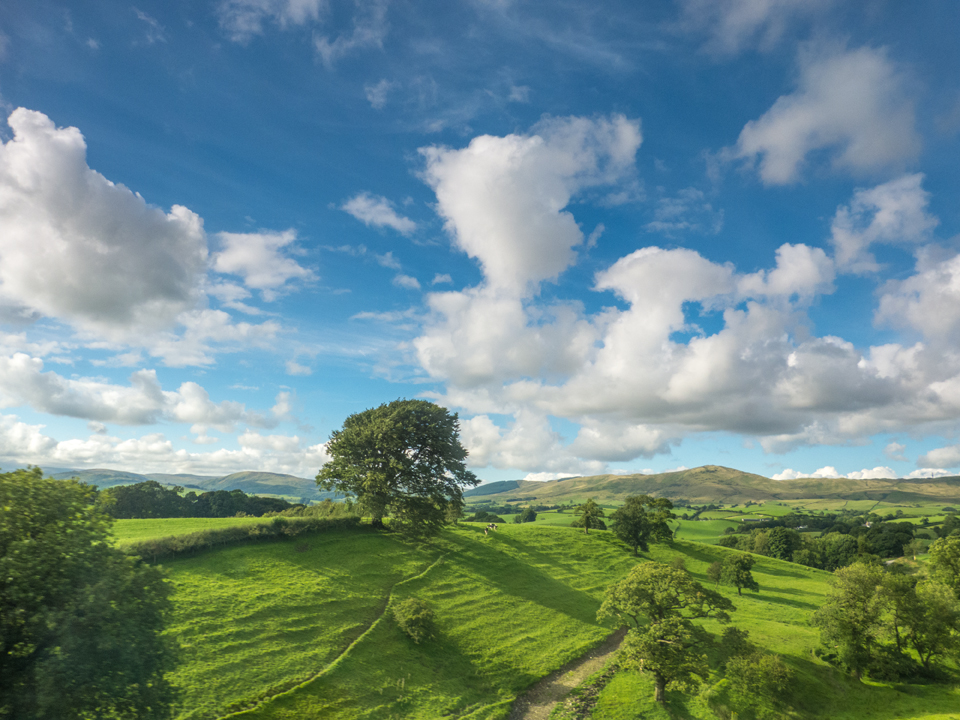 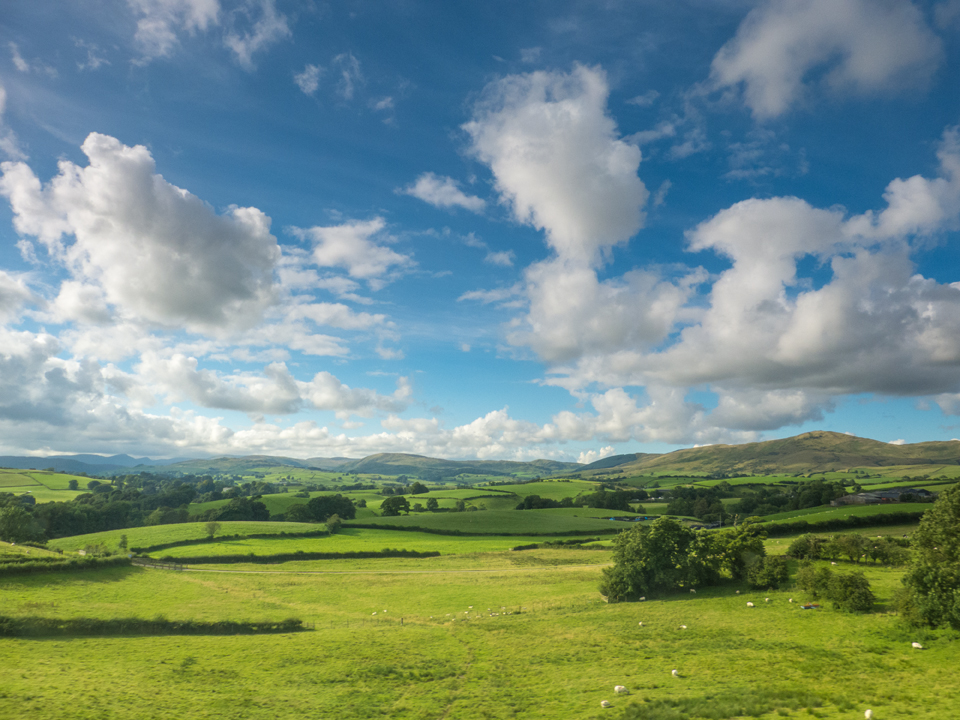 The winding route past the Howgills is always somewhat breath-taking whether from the train or driving along the M6. 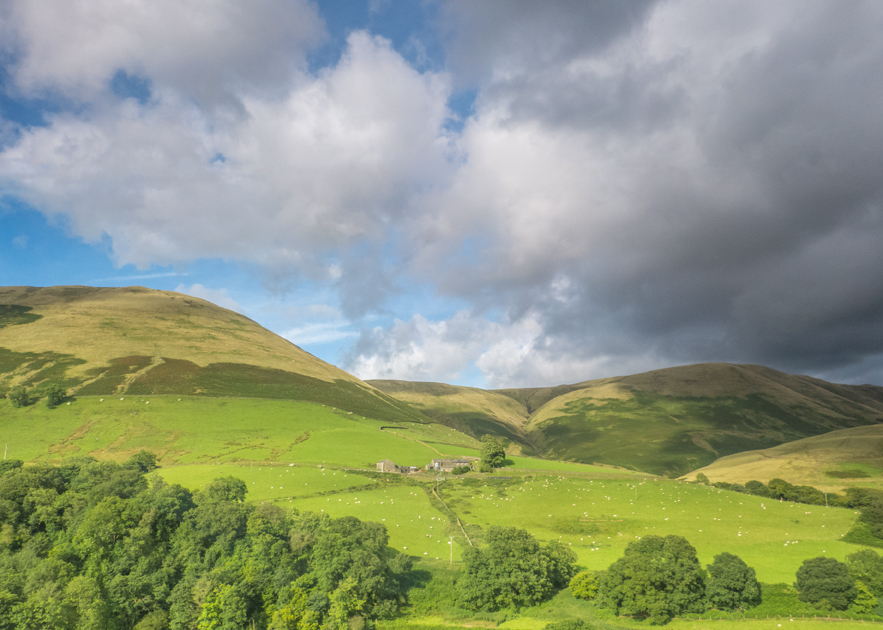 North of Penrith the view east across the intervening fields of the Eden Valley towards Cross Fell, highest point on the Pennines, was wonderfully clear. 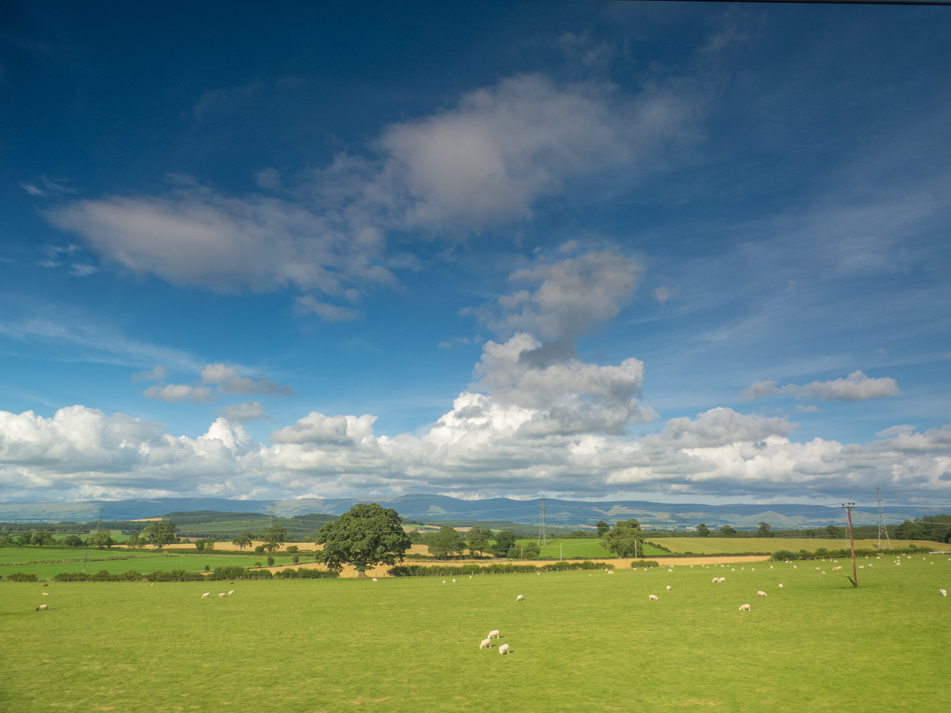 The air felt clean-washed – as indeed it was after all the rain of the past week.

A bit of detective work using Google Maps, the excellent Magic Map and the so-useful what3words suggests that the grand building on the right may be Barrock Park, just near the M6 Southwaite Services. 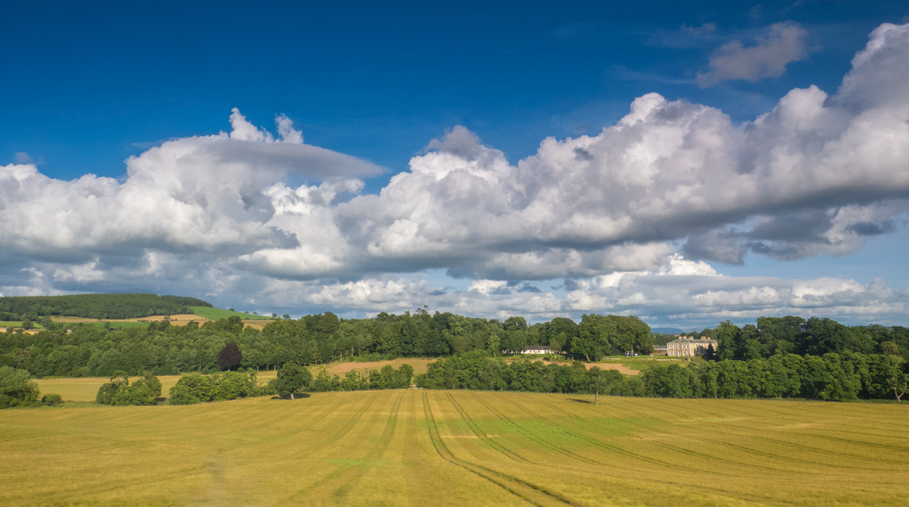 Crossing the River Esk just to the north-west of Carlisle, we approached the Scottish border and the clouds began to gather again. 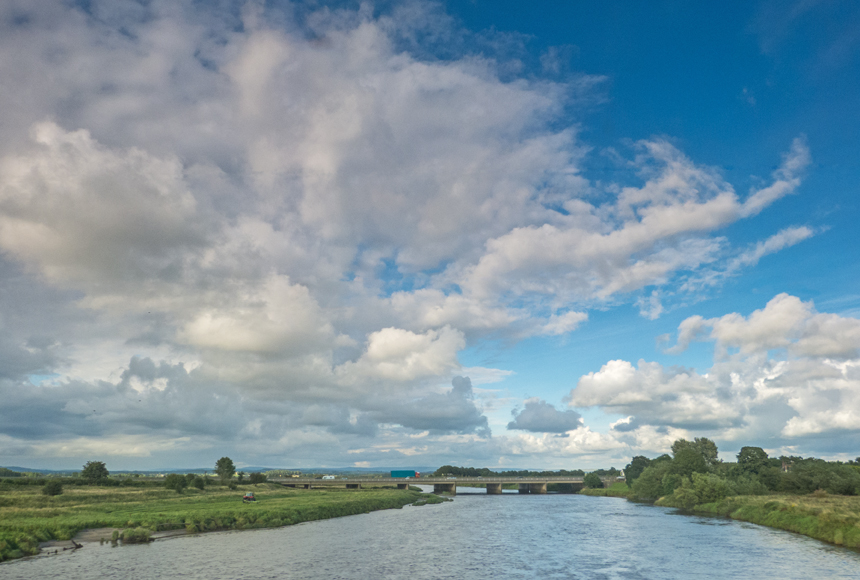 Within 15 minutes of heading west around Gretna Green, the rain and gloom descended… 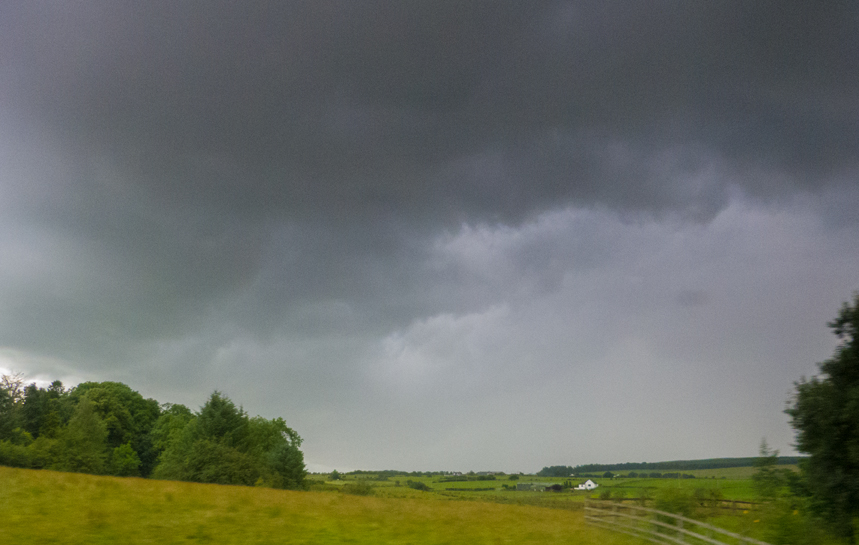 The prospect of walking the half-mile or so to my hotel from the station in Lockerbie was starting to look less and less attractive. 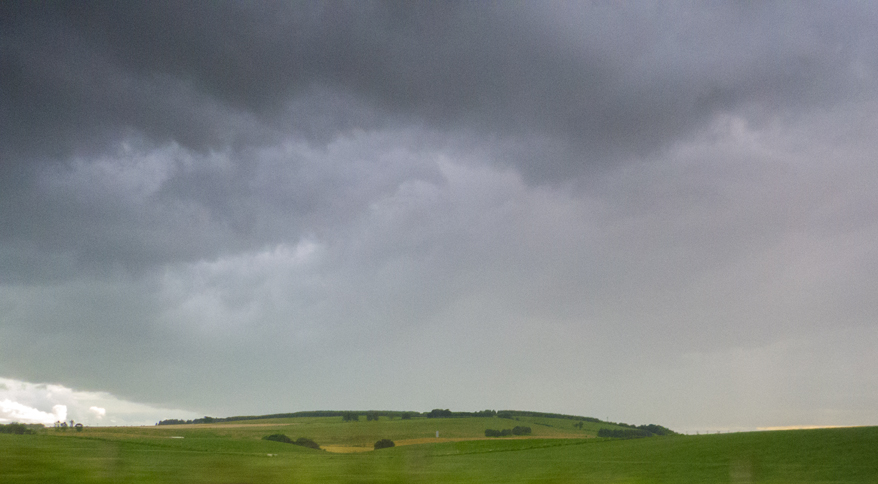 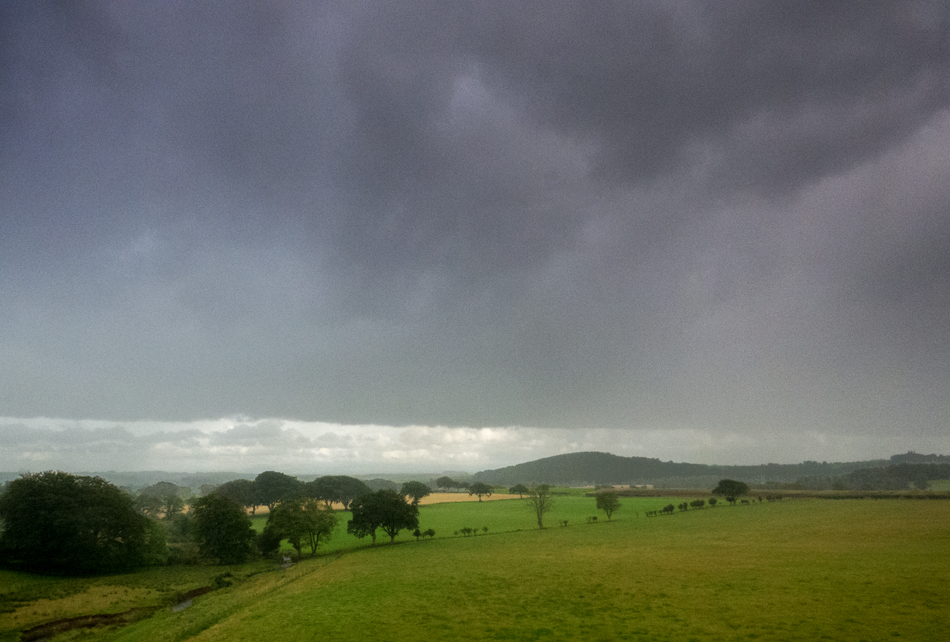 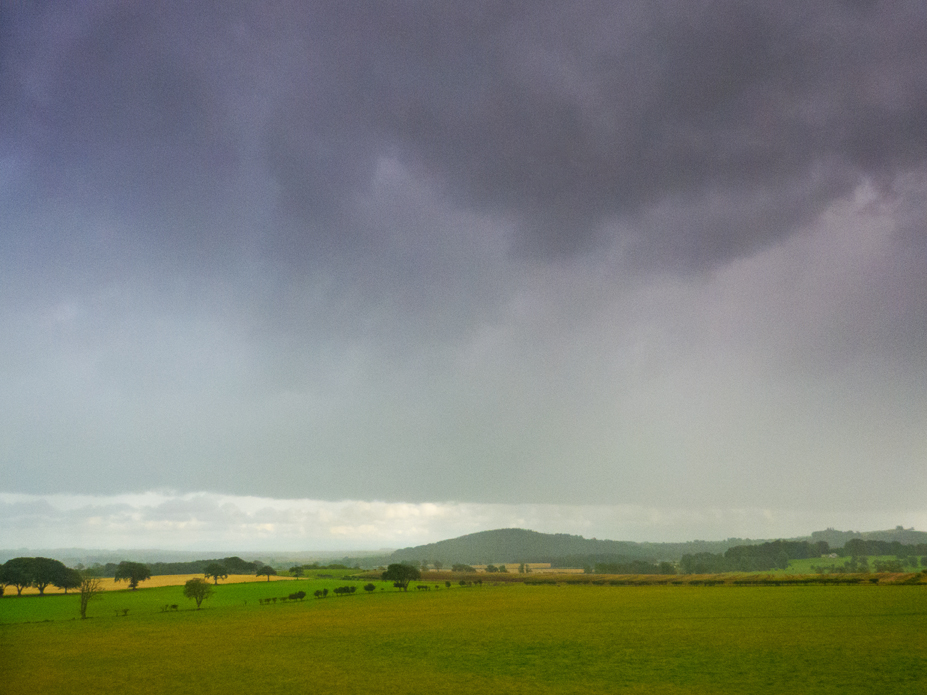 Next day we enjoyed glorious views from the top of Langholm Moor. We could see the coast to the west, almost to Edinburgh to the north, Kielder Forest to the east over the border in England, and way south down to the Lake District. The threatened rain very kindly kept away all day, though several spectacular cloud formations (doubtless with drenching rain beneath) circled us during the course of the day. 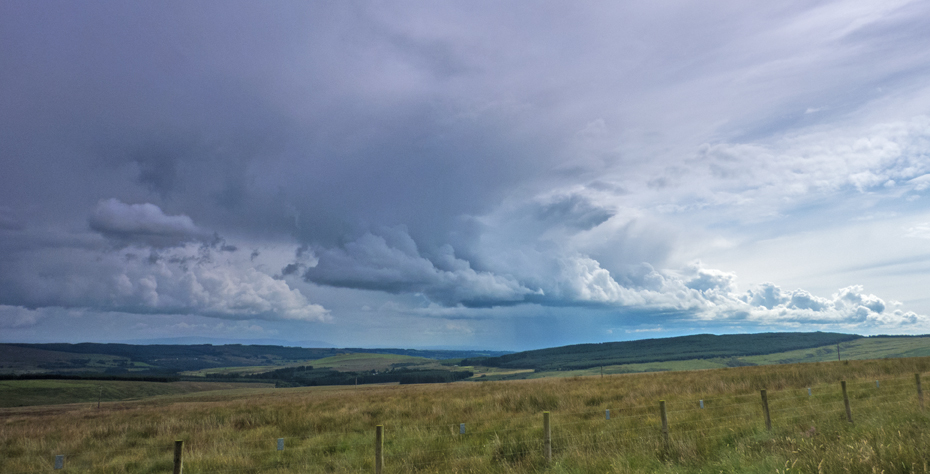 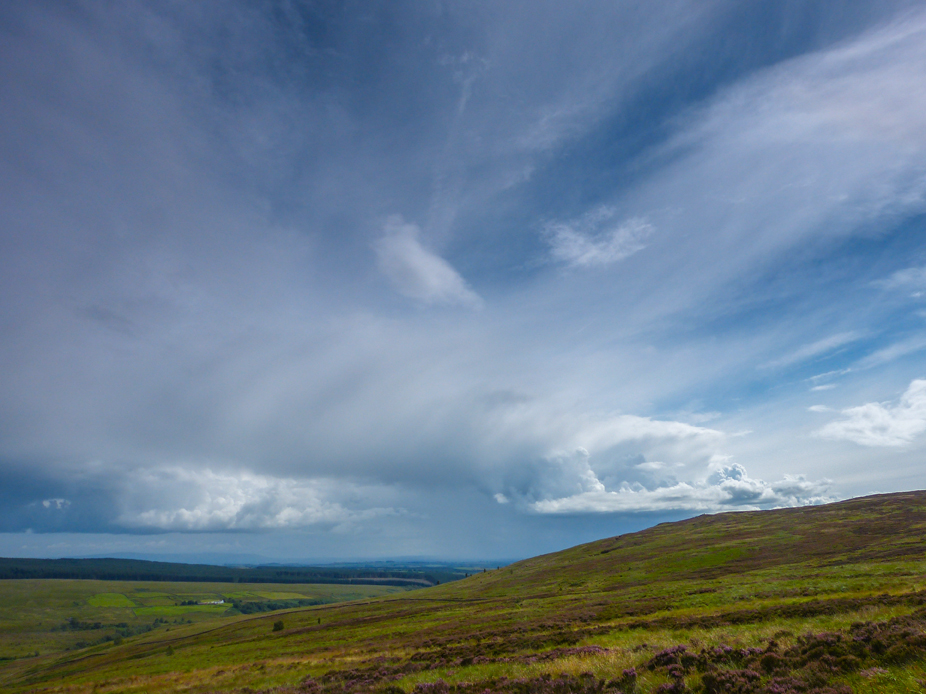 Then finally, having been dropped off back at Lockerbie Station, the rain returned to provide a fitting coda and sense of symmetry to the whole trip. First it was brief showers as we headed back to Gretna Green and the English border. 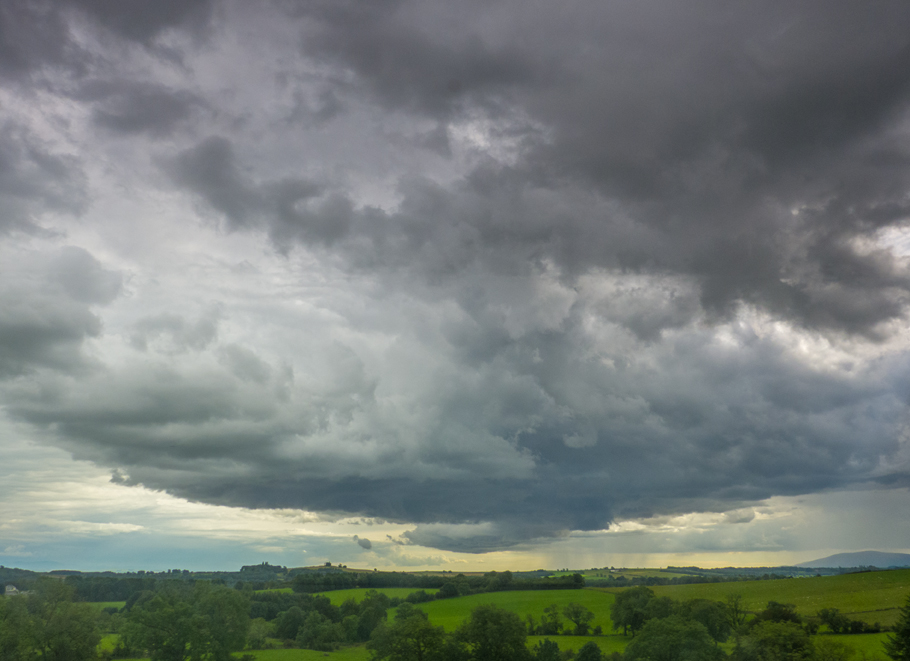 The clouds thickened steadily, so it was a good thing that the farms along the route had been busy… 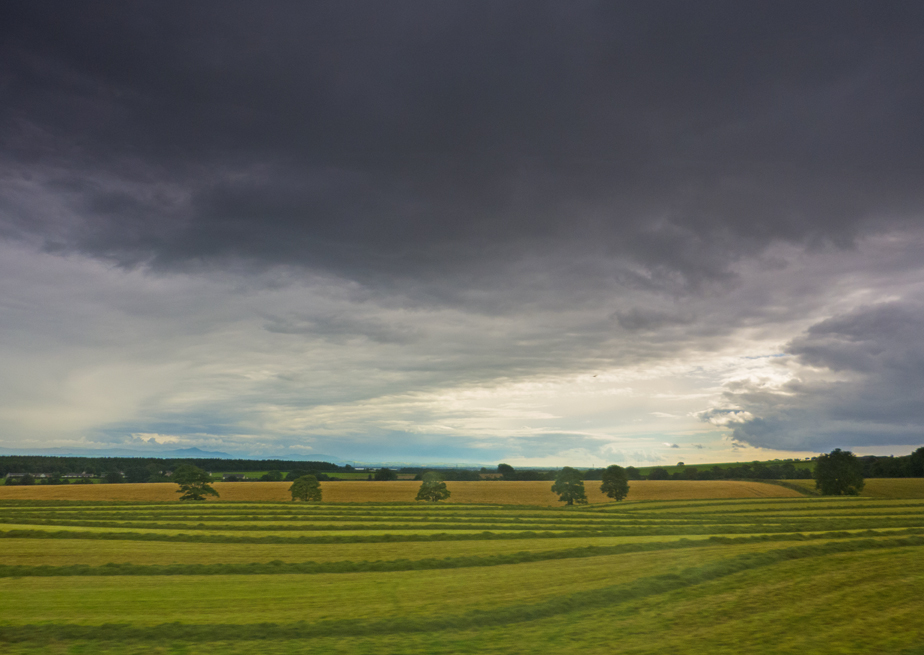 Then finally, crossing the Esk again, the clouds congealed (it’s the only word to describe it) into a thick layer of stratocumulus and the lights went out, leaving the remainder of the journey rather less interesting than the journey north had been. 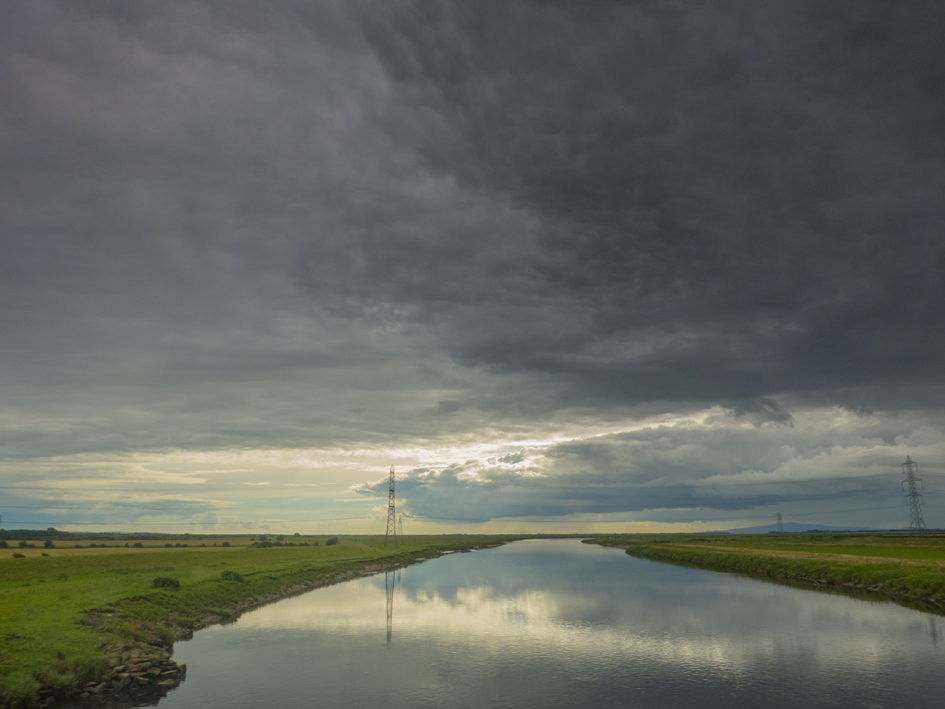