I promised to post pictures of the return journey from the Thurso workshop, but there were so many (given that the journey through the far north was this time in daylight) that it’s taken a while to sort through them. A Bank Holiday is the ideal time for doing that – especially when the weather outside is so grim (click on images for full size – browser back arrow to return).

We should, of course, start in the Flow Country and see something or our study site, so here it is, hemmed in by windfarms. To the left is the large summit of Morvern and the low ridge of Scaraben, while to the right are the twin peaks of Ben Griam Mor and Ben Griam Beg (of which more later): 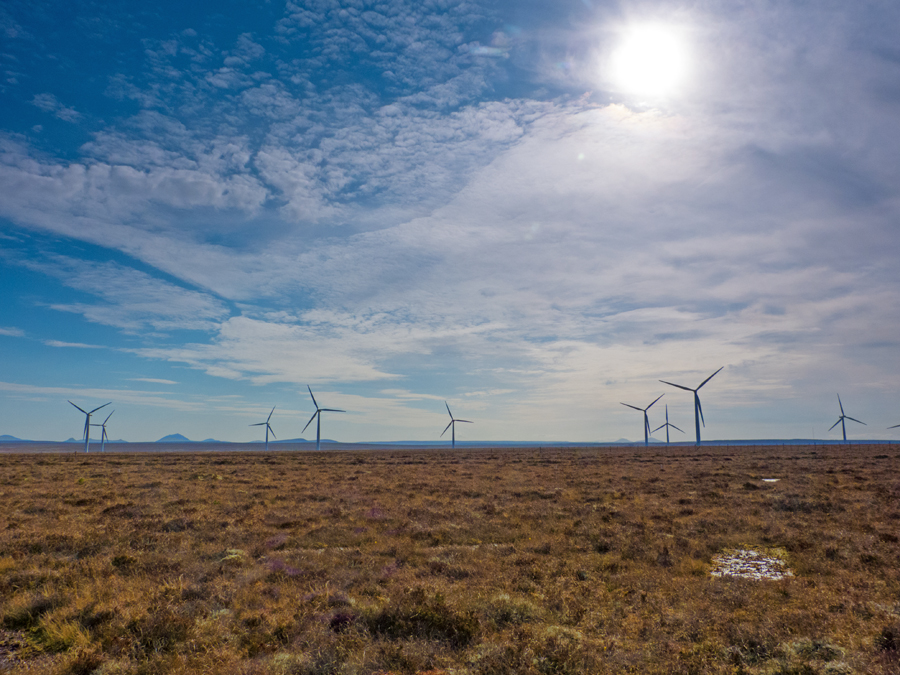 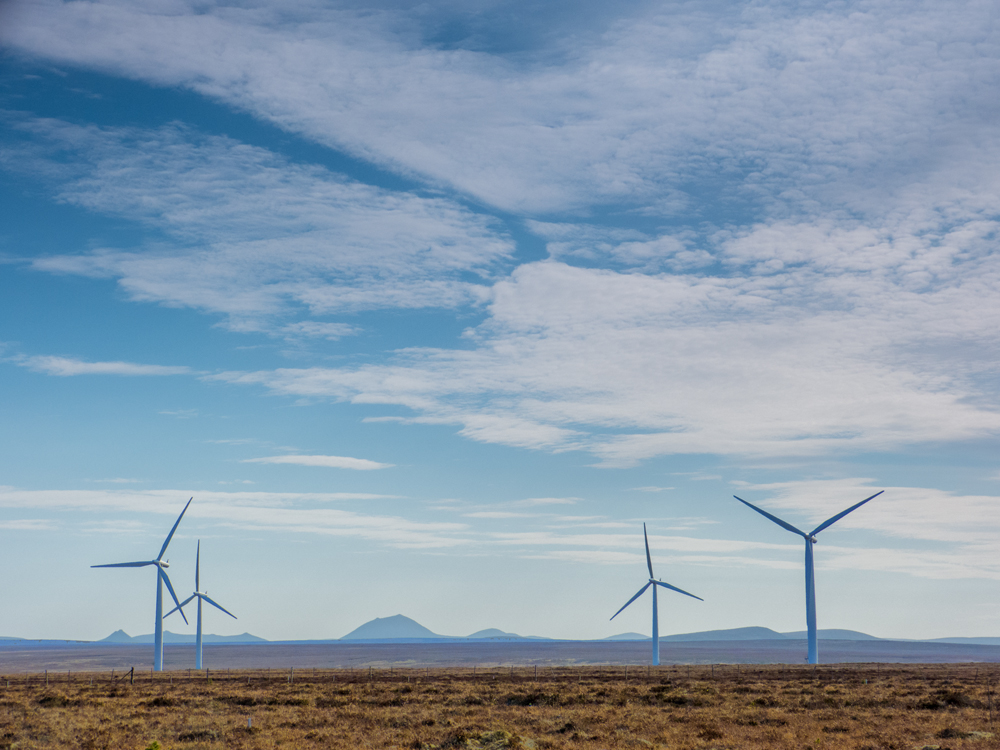 Working in the far north (level with John o’Groats), it’s as well to be aware that the weather can change in minutes. This bank of high cirrostratus nebulosus and cirrostratus fibratus heralded a dramatic drop in temperature and a scramble from shirtsleeves to thick warm windproof clothing as we took the last few samples of the day from the bog: 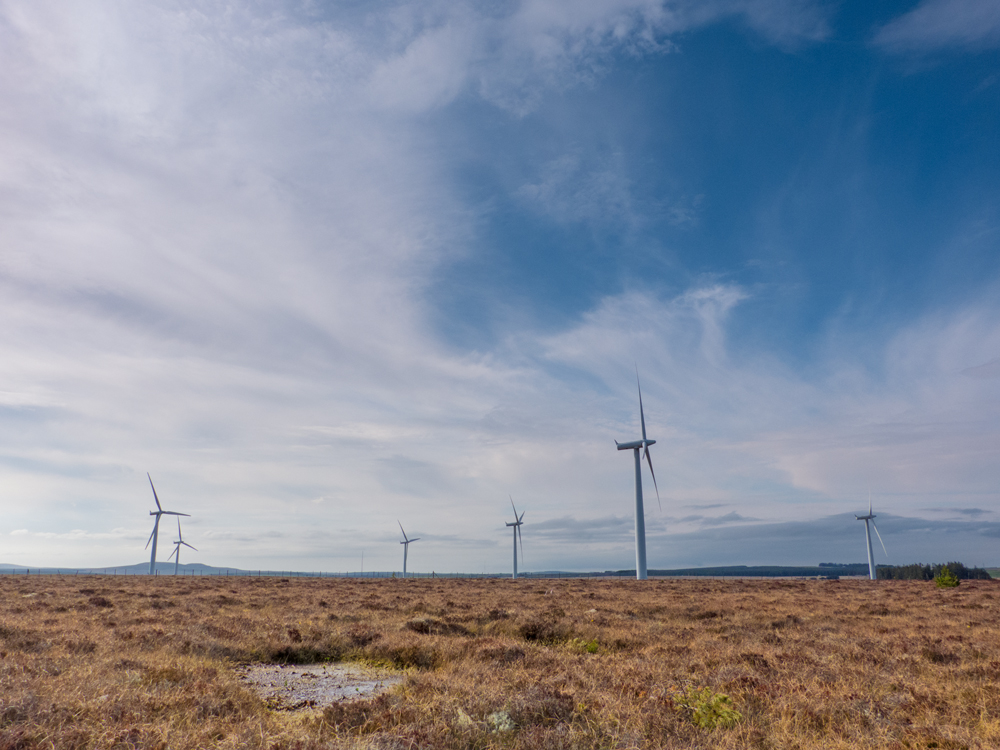 Leaving my little team to continue, I headed south the following morning, starting at the northernmost railway station in Britain: 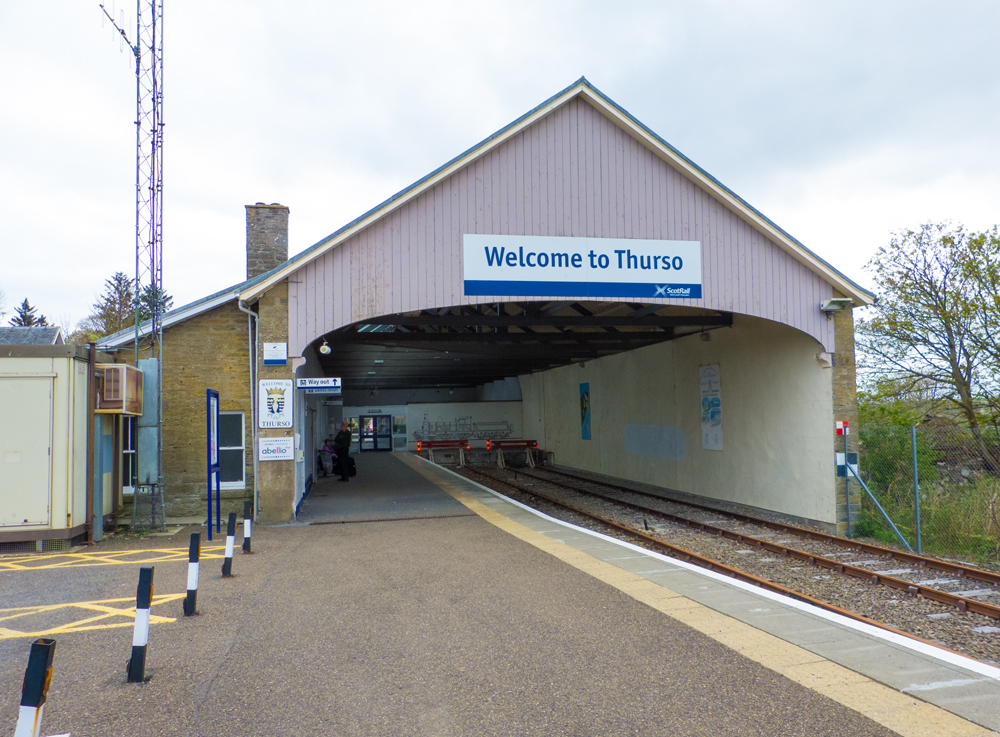 The sky was looking pretty ominous by the time we departed Thurso and I was concerned that it might mean that I would have 16 hours of grey landscapes and skyscapes to photograph: 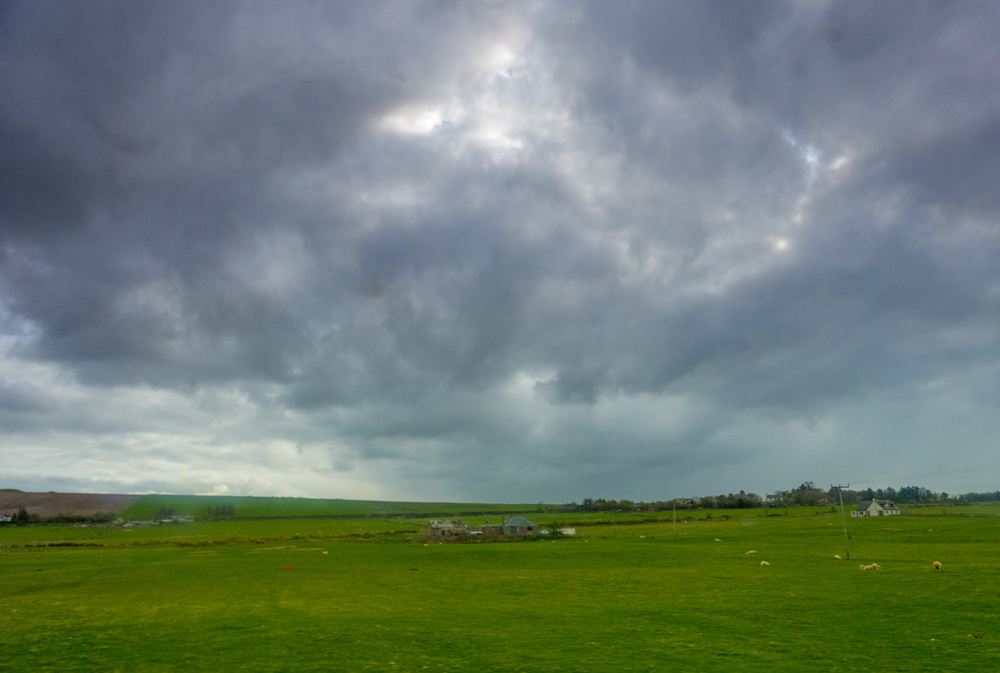 Fortunately things started to brighten up as we passed from Caithness into Sutherland, weaving our way through the various forestry plantations planted on the peatlands during the 1980s (and now being removed, sometimes by the same contractors who planted them, because it is recognised that the whole Forestry Grant Scheme was a mistake): 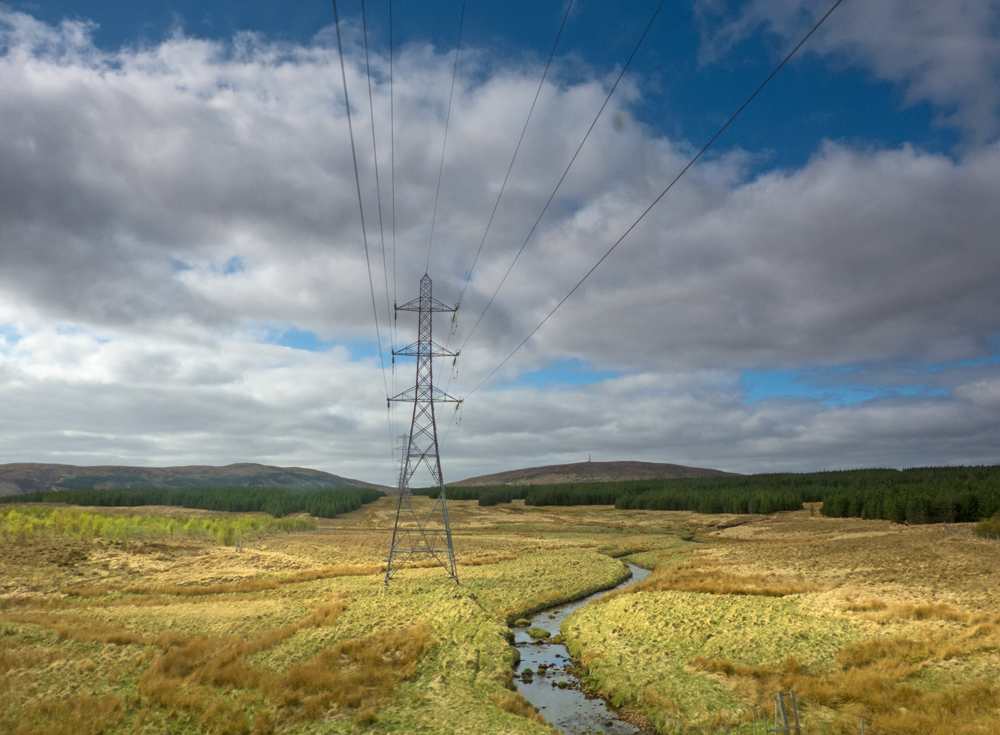 The train station at Forsinard, in Sutherland, is both the train station and the RSPB Information Centre. The RSPB has been one of the most active bodies in the restoration of the peat bogs from the afforestation of the 1980s. They have felled and begun restoring huge areas (although these are still small compared to the total area that was planted): 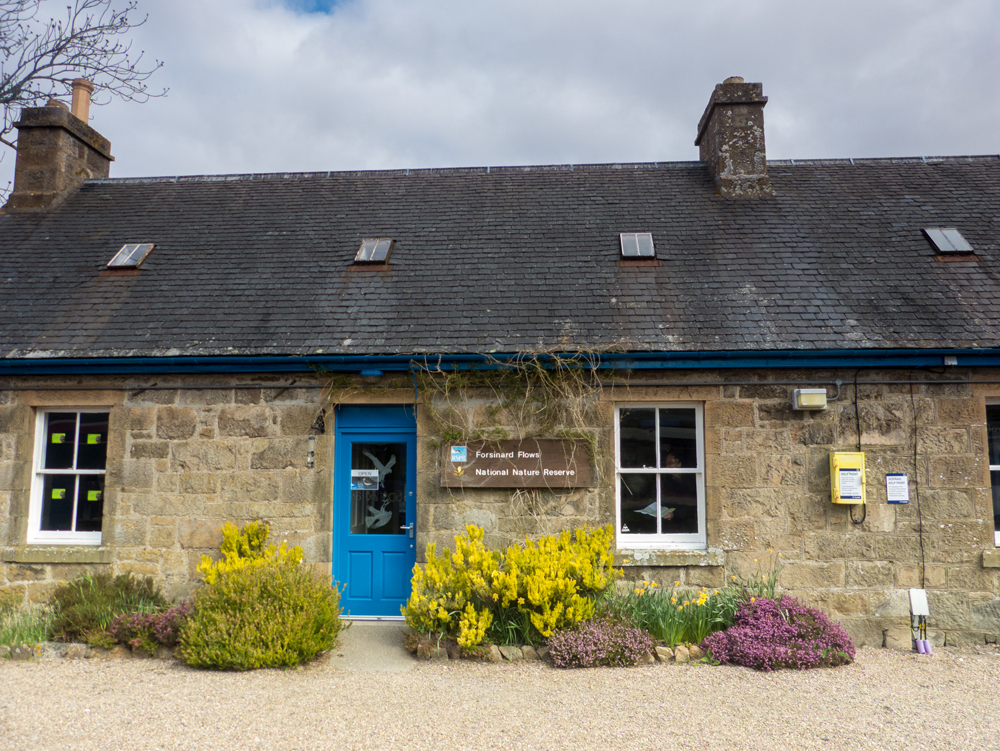 To promote and display the bogs to best effect, a Flow Country consortium has constructed a Viewing Tower which allows visitors to view the patterned peat bogs from above. This is an inspired move because it is, quite frankly, almost impossible to appreciate (or even see) the quite dramatic patterns which characterise these northern peatlands. Simply to find our way around in them, we have to use aerial photographs because it is possible to walk right past a major area of pool patterning without realising, so low-relief is the structure of the bog surface, and it is quite impossible to see the nature of the pattern without viewing it from above. The Viewing Tower allows a bird’s eye view, and in some weird way this remarkable piece of architecture blends into the bog landscape. It’s just possible to catch sight of it from the train: 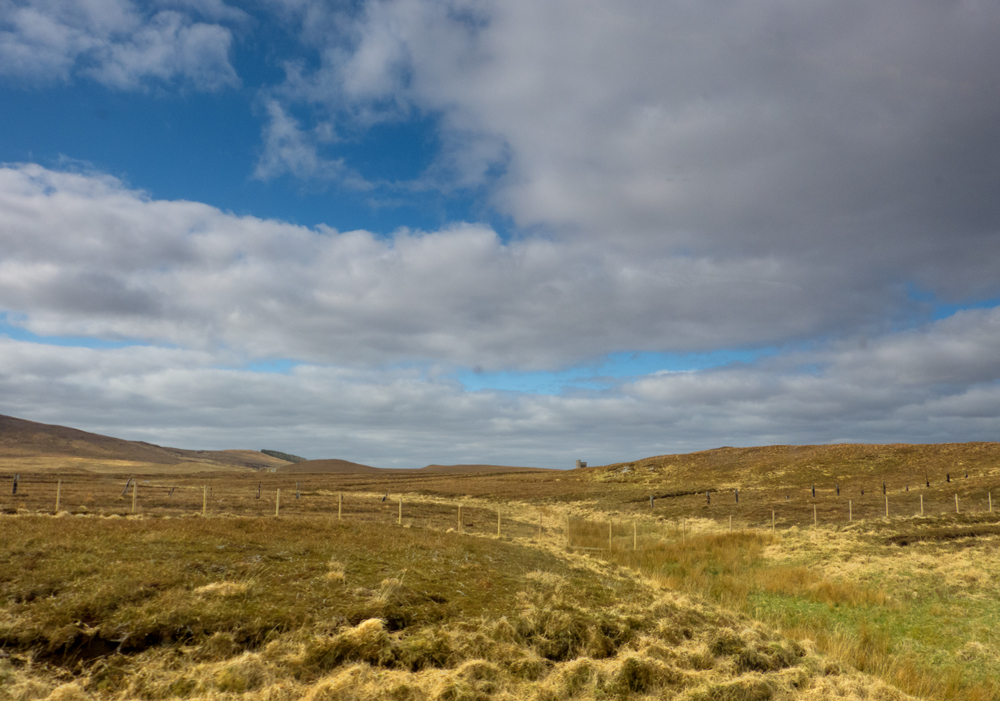 Travelling south from Forsinard, the train passes through one of the remaining un-afforested blanket bog landscapes, a huge peat-dominated plain broken by the twin peaks of Ben Griam Beg (to the right) and Ben Griam Mor (in the background): 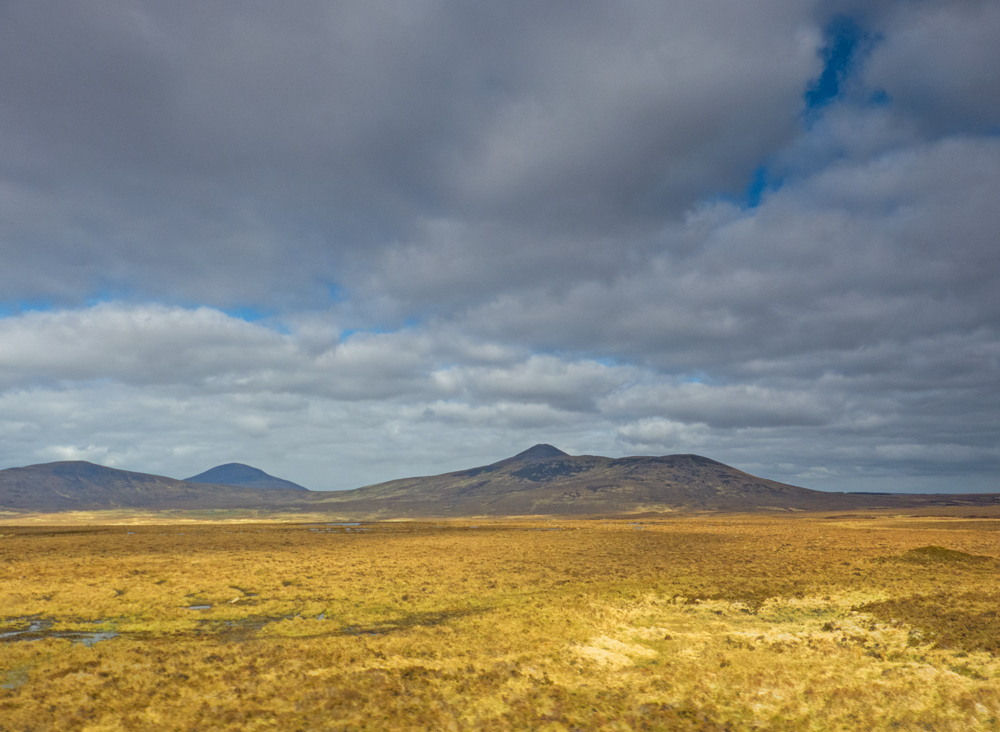 Some considerable time later, the train emerges at the coast at Helmsdale: 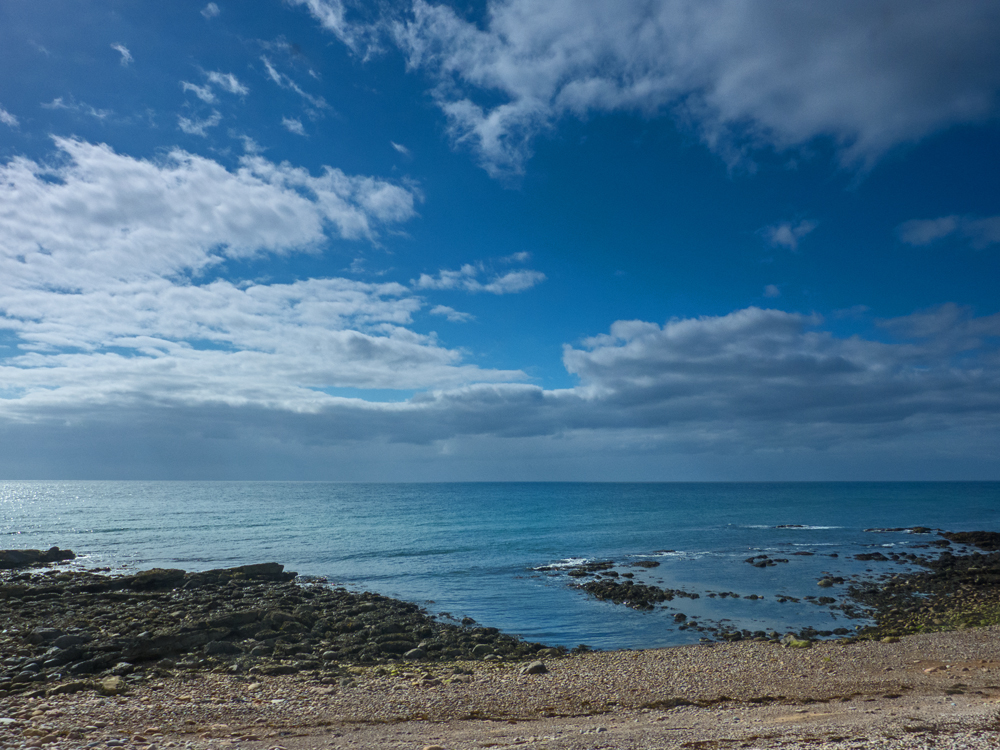 There is then a very long and winding journey round most of the firths which massively indent this eastern coastline. Having swung all the way inland to Lairg, the line finally swings back to the coast and crosses the Kyle of Sutherland at Invershin: 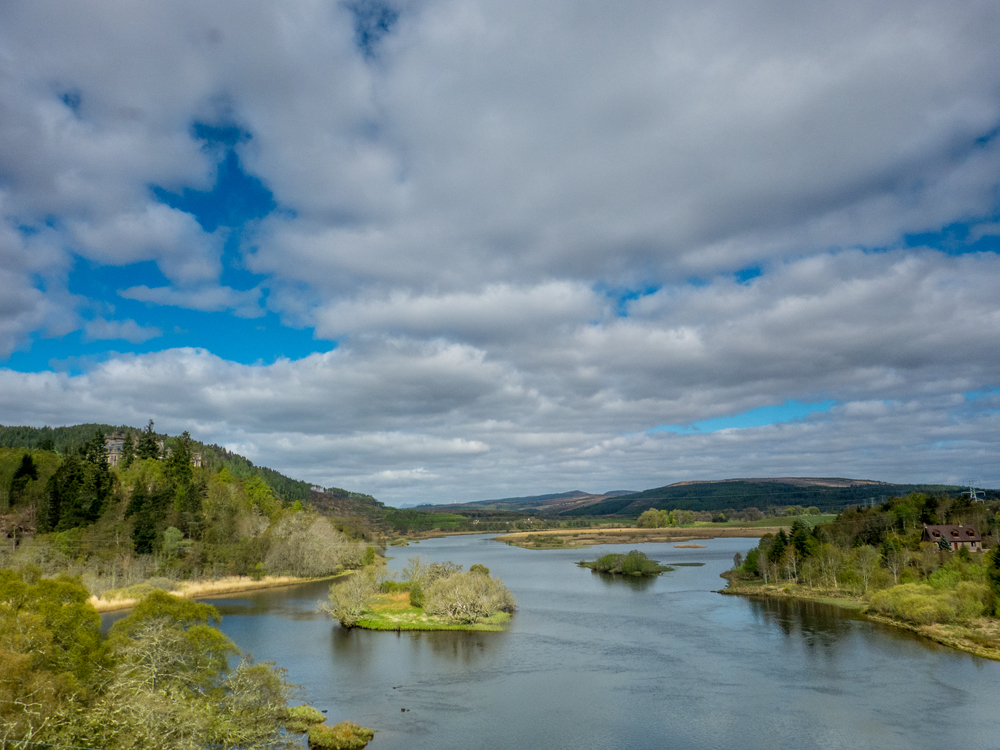 After that the landscape becomes softer as the train wends its way along the coastal margins and through the agricultural lands to Inverness: 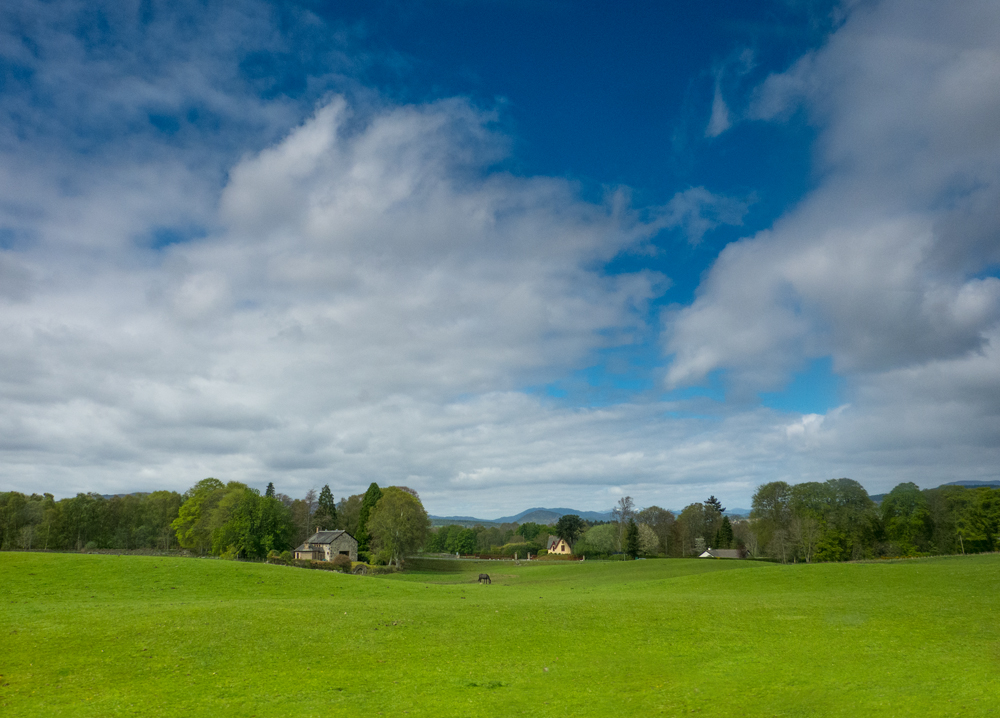 Departing Inverness, I was overjoyed to discover another bunch of drunken lads clutching boxes of lager staggering onto the train, so I quickly hopped into another carriage. One journey like that on this trip was enough. There were therefore high hopes of some good views as we headed south to Edinburgh. Unfortunately, the lady in charge of the catering trolley took to sheltering near the doors with her trolley from the drunken lads next door whenever she could, which rather closed off that option for everything facing west. The Cairngorms, however, were to the east, so a few shots were obtained, but alas the stunning view from Dalwhinnie of snow-covered Ben Alder looming over Loch Ericht was not: 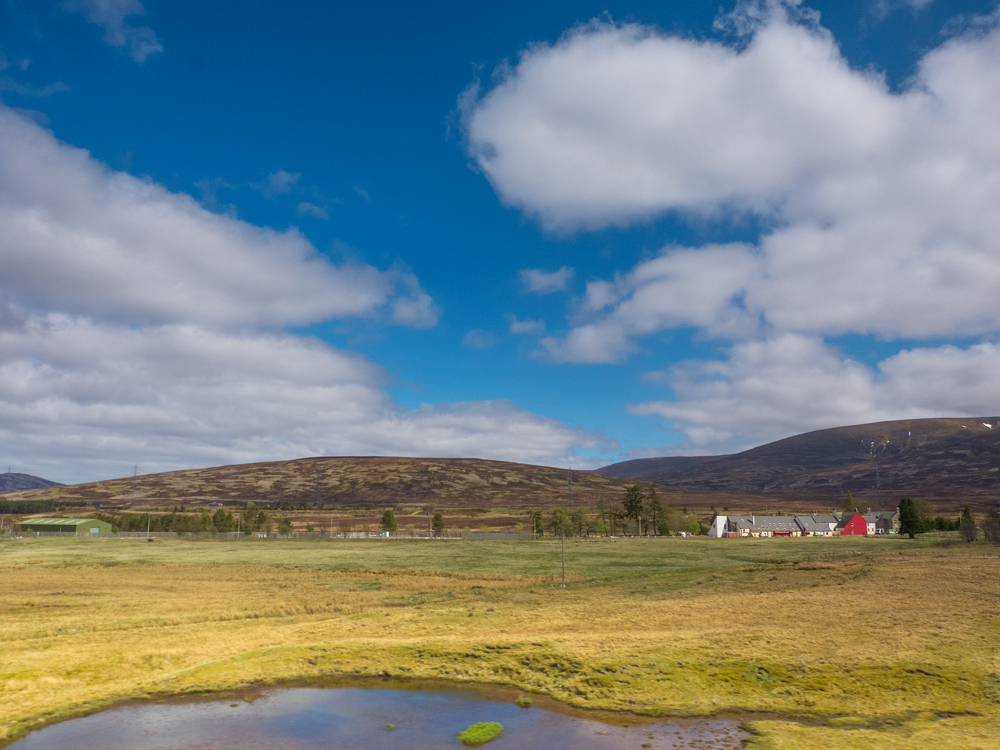 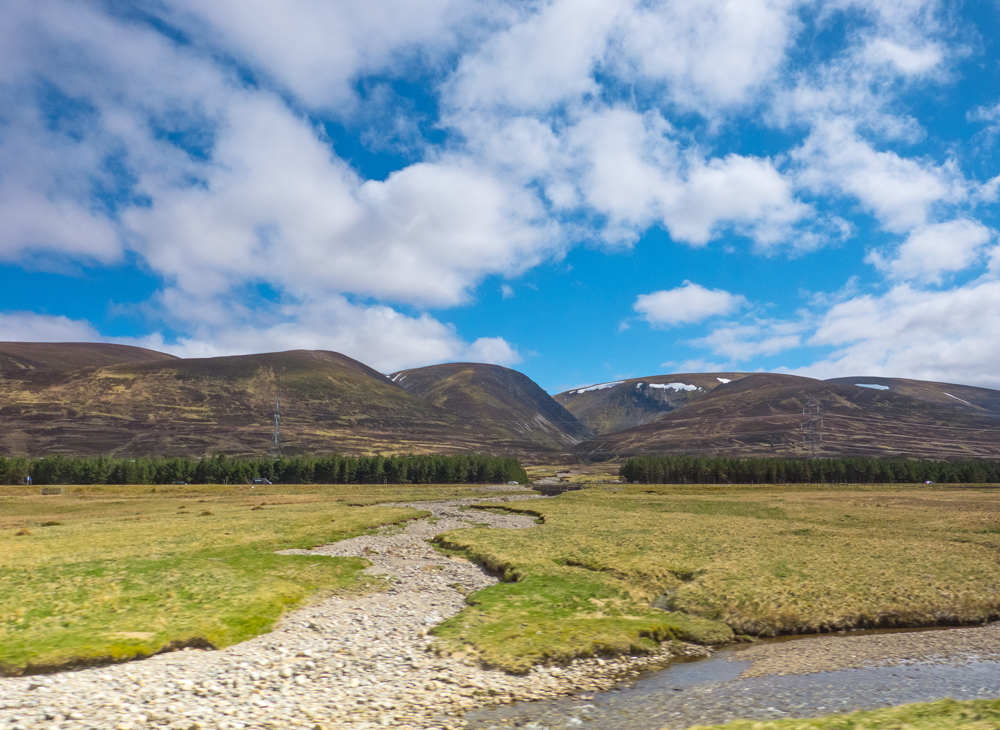 I did get this, though, which I think is Glen Garry: 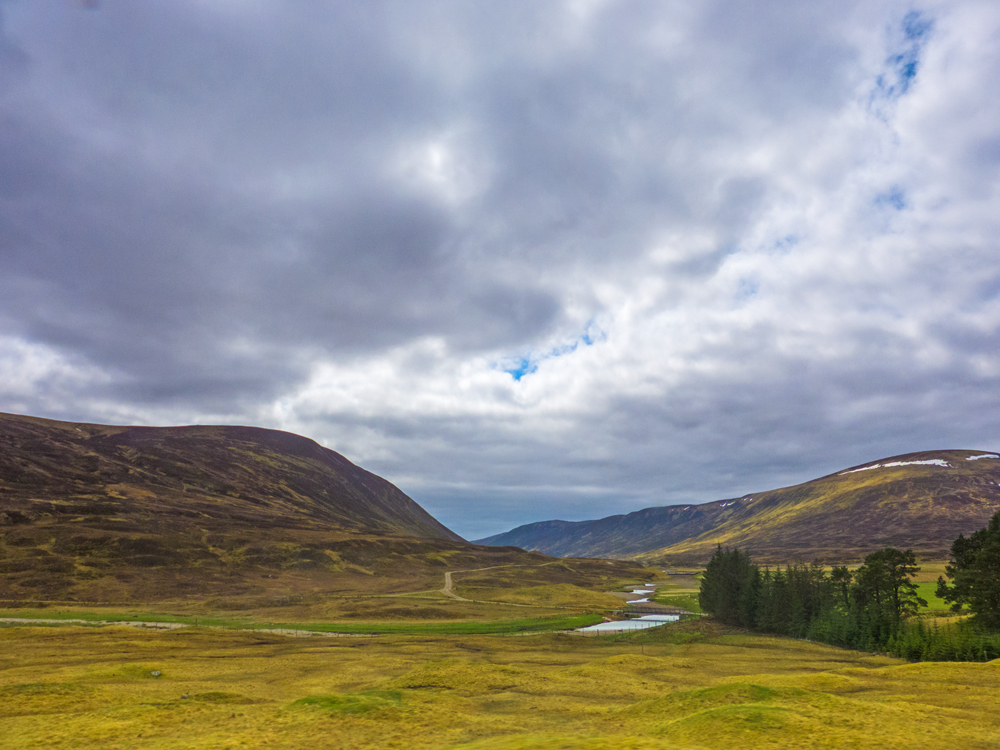 Passing over the Highland Boundary Fault between Pitlochry and Perth, the line slid gently into a wholly agricultural landscape which (apart from the distant hills) could have been anywhere from Northumberland to Essex: 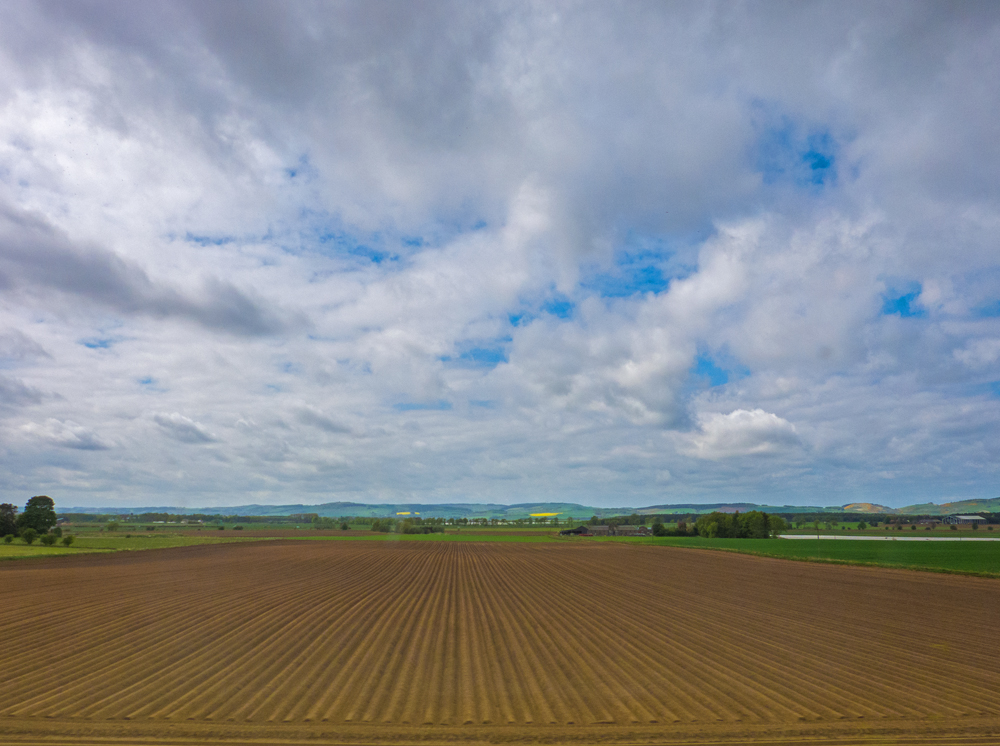 The rape fields look the same wherever they are (this is close to Edinburgh): 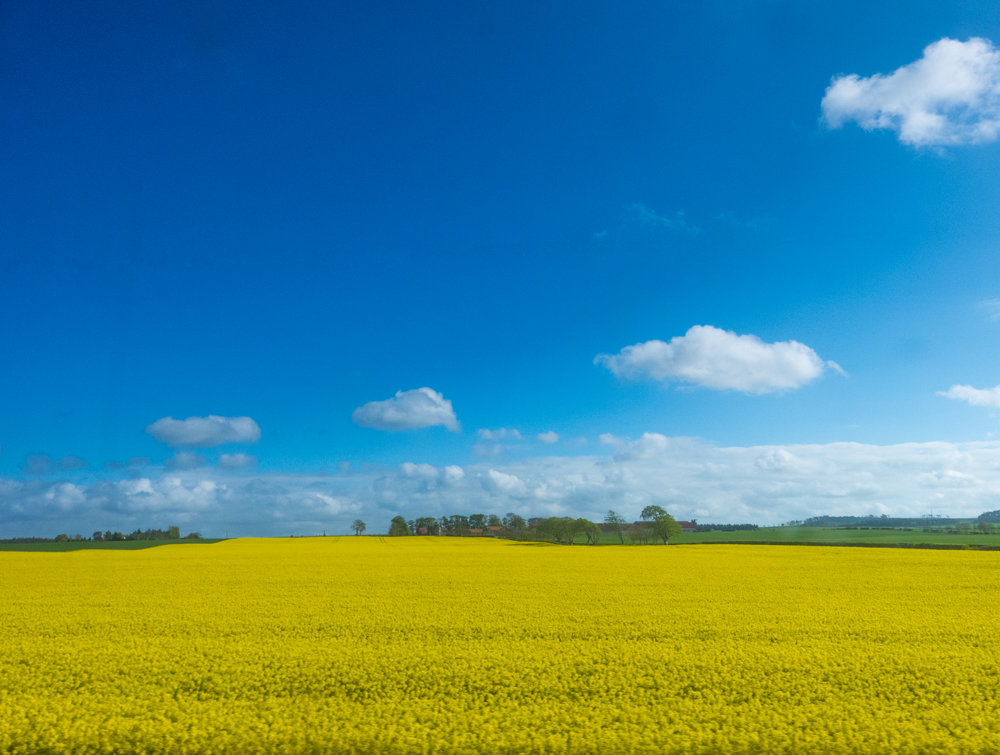 Then heading south from Edinburgh it was clear that a great deal of ploughing going on, much to the delight of the gulls, feasting on worms and grubs: 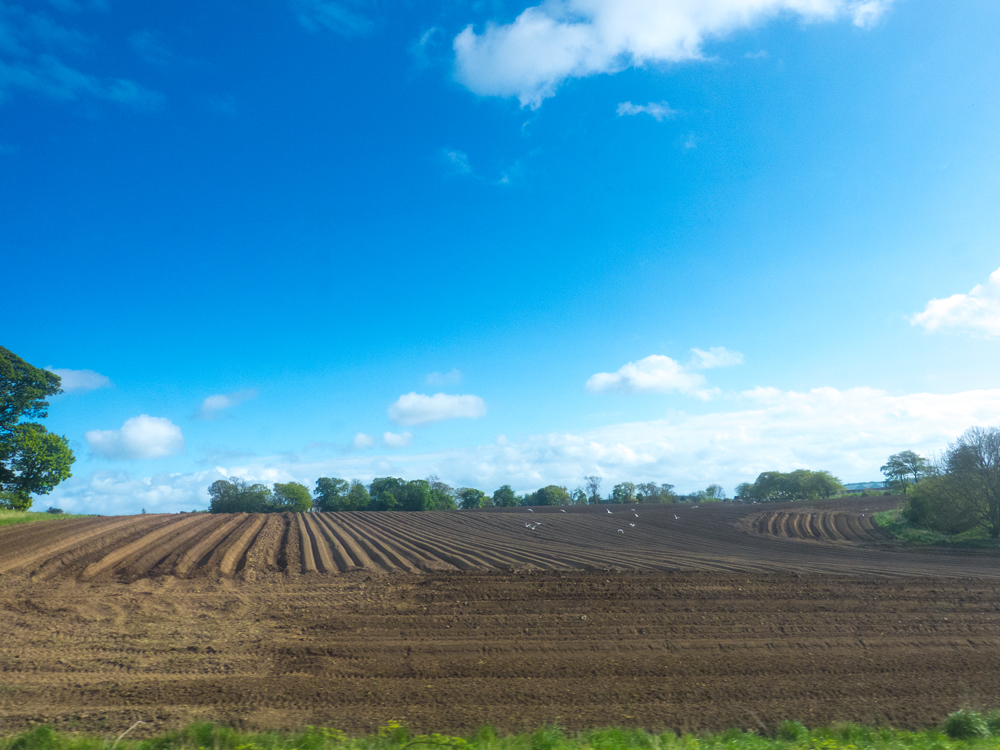 Heading south towards Peterborough for the final leg, via Ipswich, then home, the light slowly faded over the fields as they whirred past our Virgin East Coast Pendolino train: 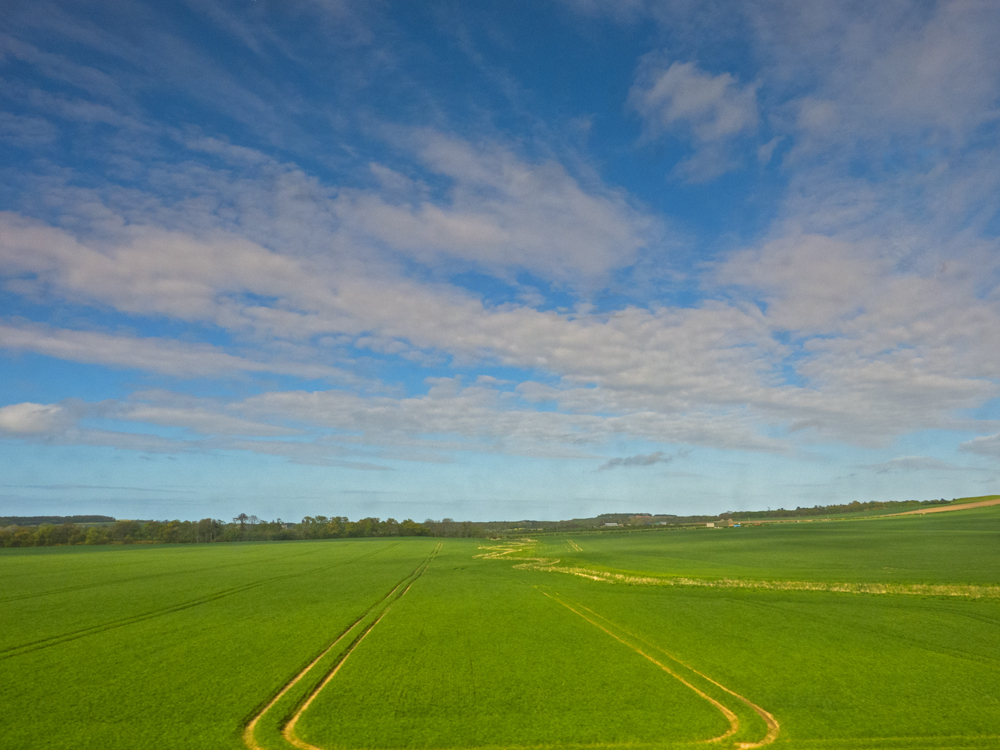 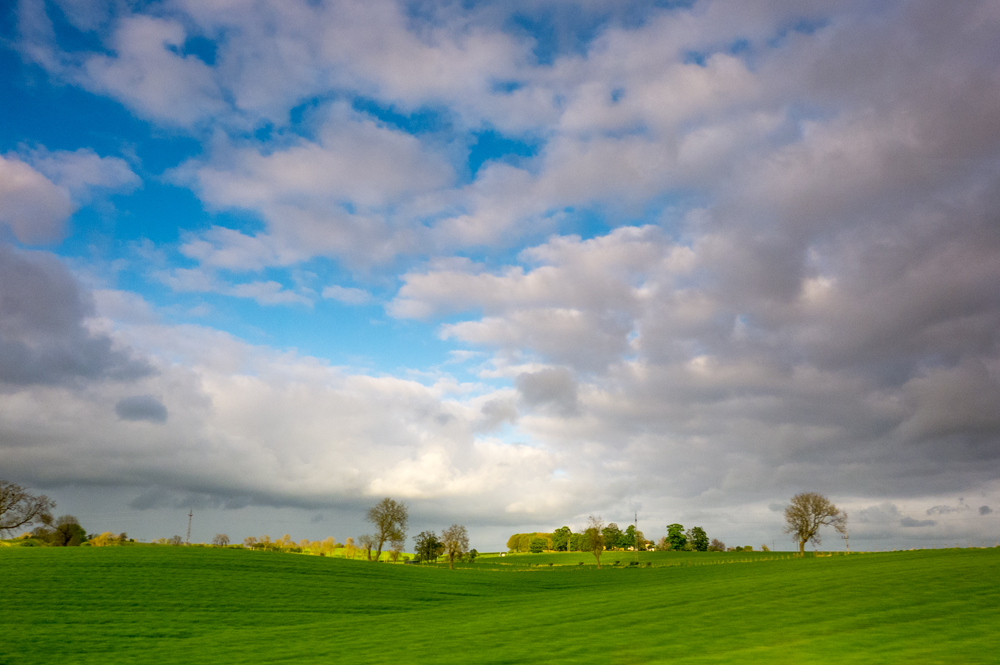 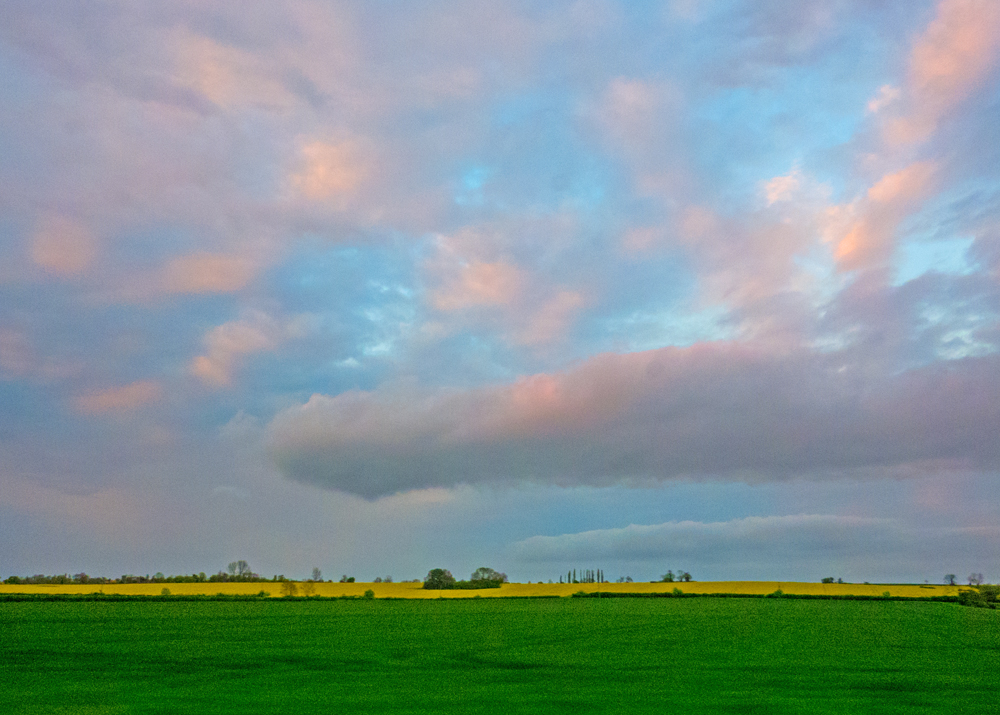