A gentle and short walk down to Asda this morning (for haircut…) produced no end of wildlife – provided you are prepared to include plants as ‘wildlife’. It really does feel as though summer is on its way, with that slight haziness caused by dust rising in the atmosphere, cumulus just fading into the blue horizon rather than being hard white cauliflower heads, and everything busy as bees.

The first thing that caught my eye was the fact that the elder bushes are now coming into flower, their huge flat flowering heads forming essential platforms for a great many insects to feed, find a mate, or be eaten by passing birds. These white platforms will become dense sprays of black elderberries with magenta stalks in autumn:

It may not look much compared to a soaring buzzard or the riot of colour that is a goldfinch, but we swear by the berries from these elderflowers. While elderflower drink is extremely refreshing on a summer’s day, the tincture of berries (available as ‘Sambucol’ from Boots and Holland & Barrett, for example) seems to keep us largely free from the worst of cold and flu symptoms. 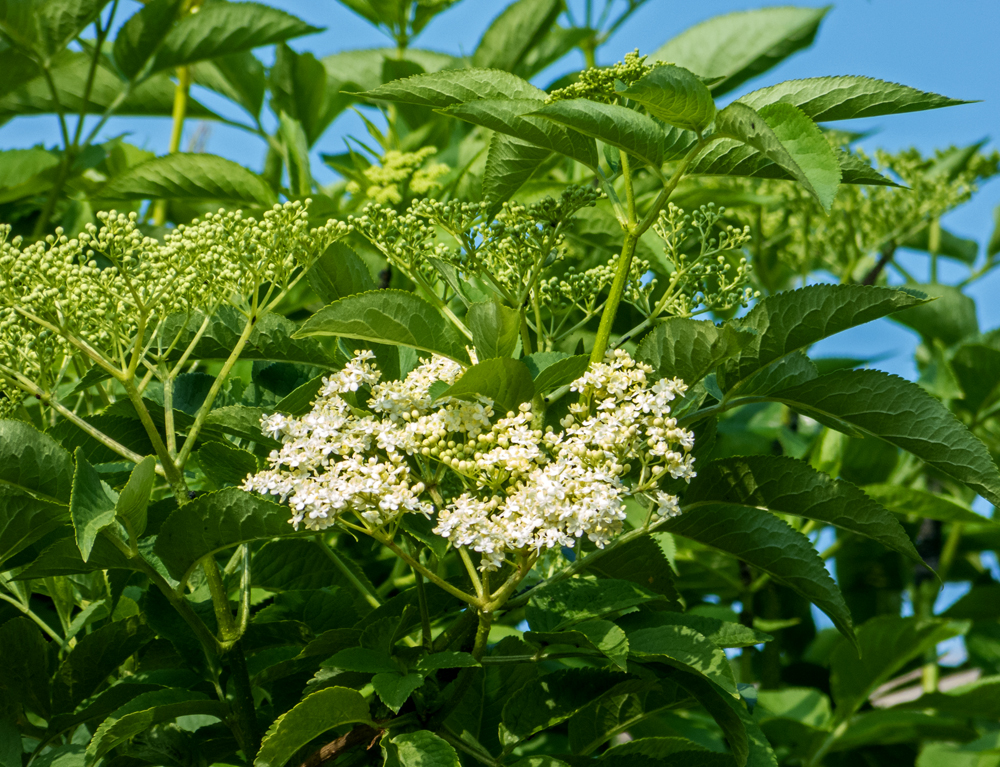 Then a strange sort of strangled, high-pitched great tit call from a nearby birch sapling attracted my attention. I couldn’t think what it was until I spotted… – a great tit fledgling calling to its parents for food – and they obliged: 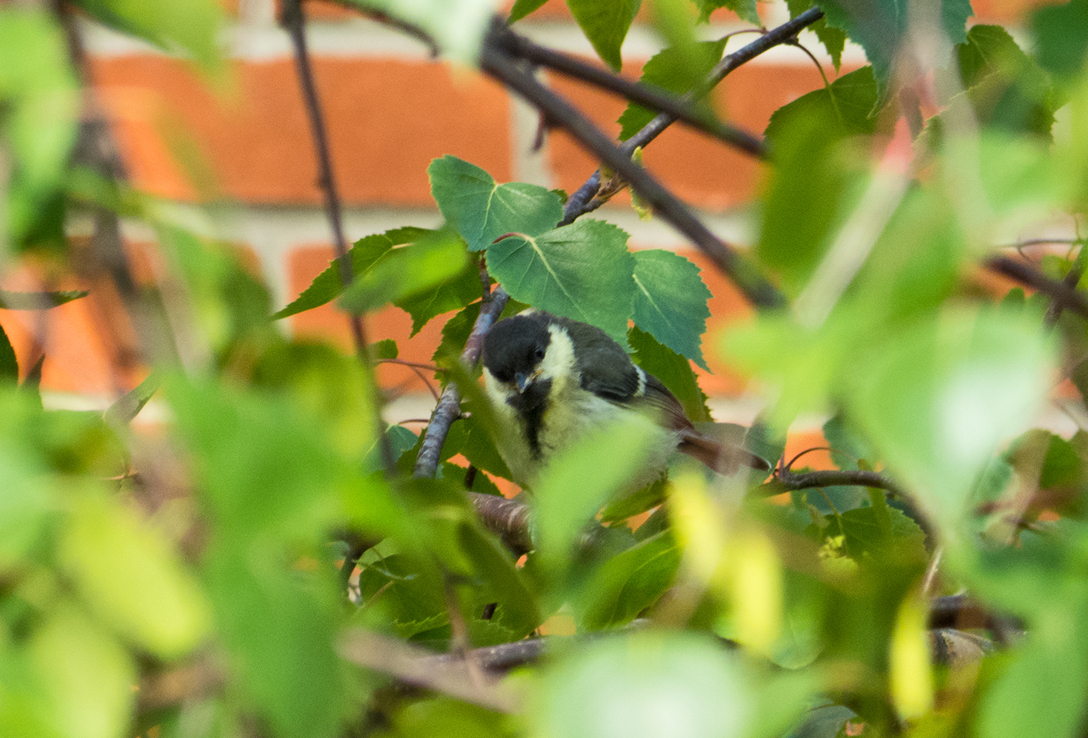 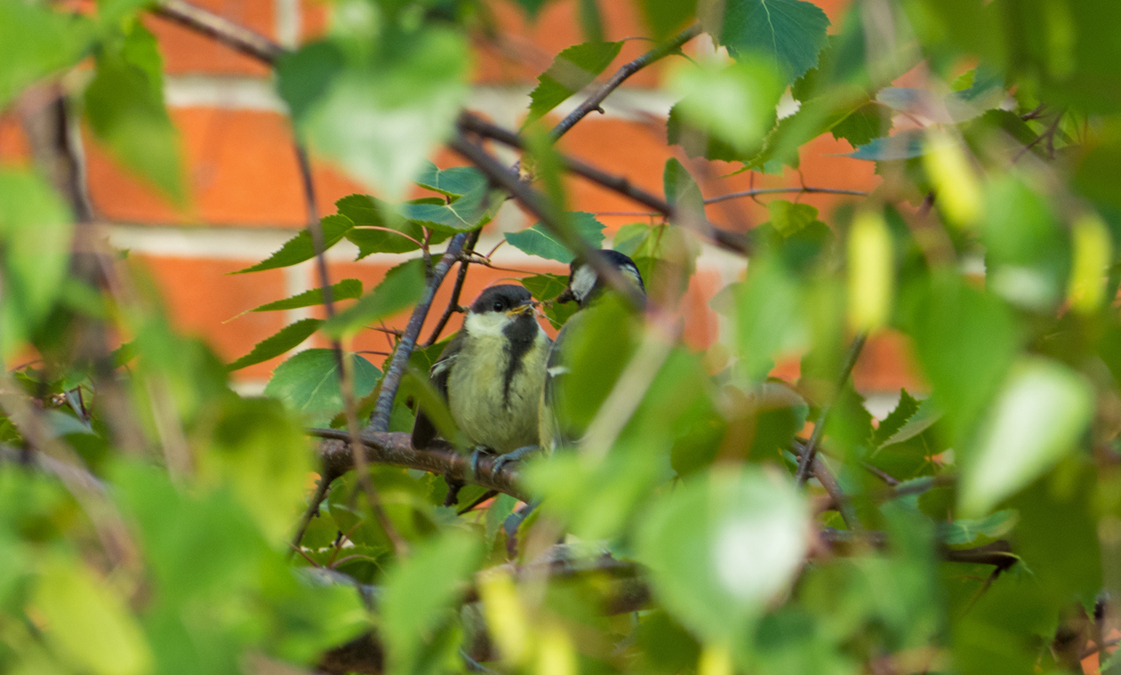 Having been fed, it set off to explore the word around it a bit more: 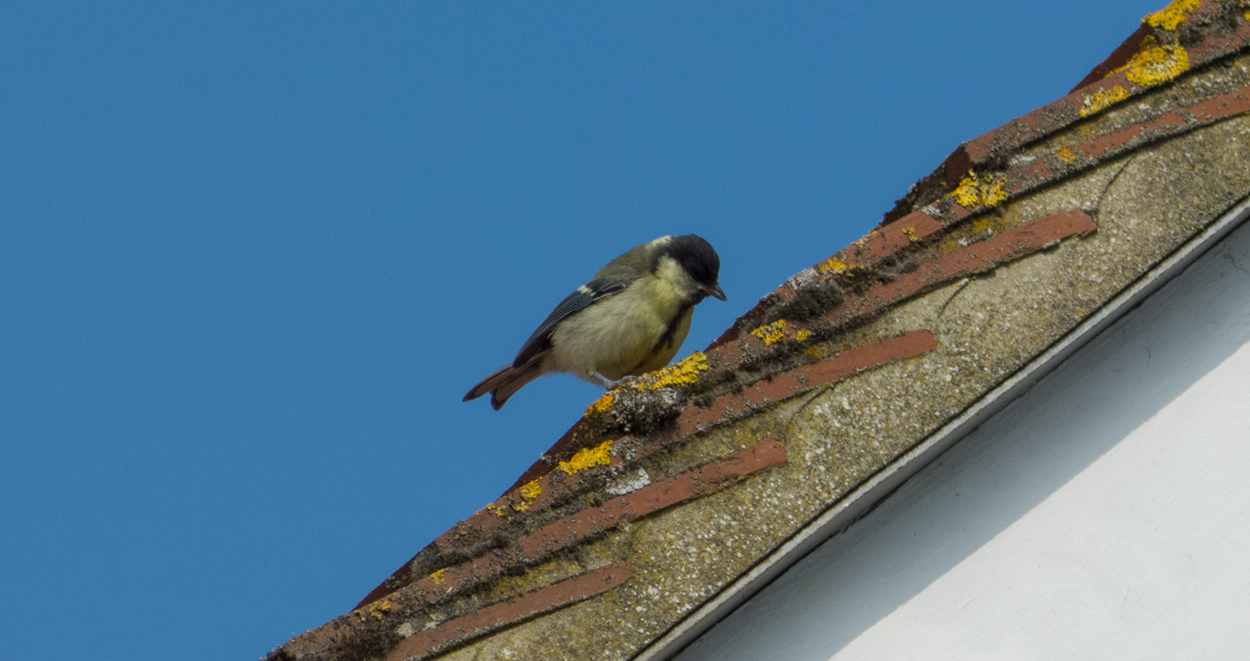 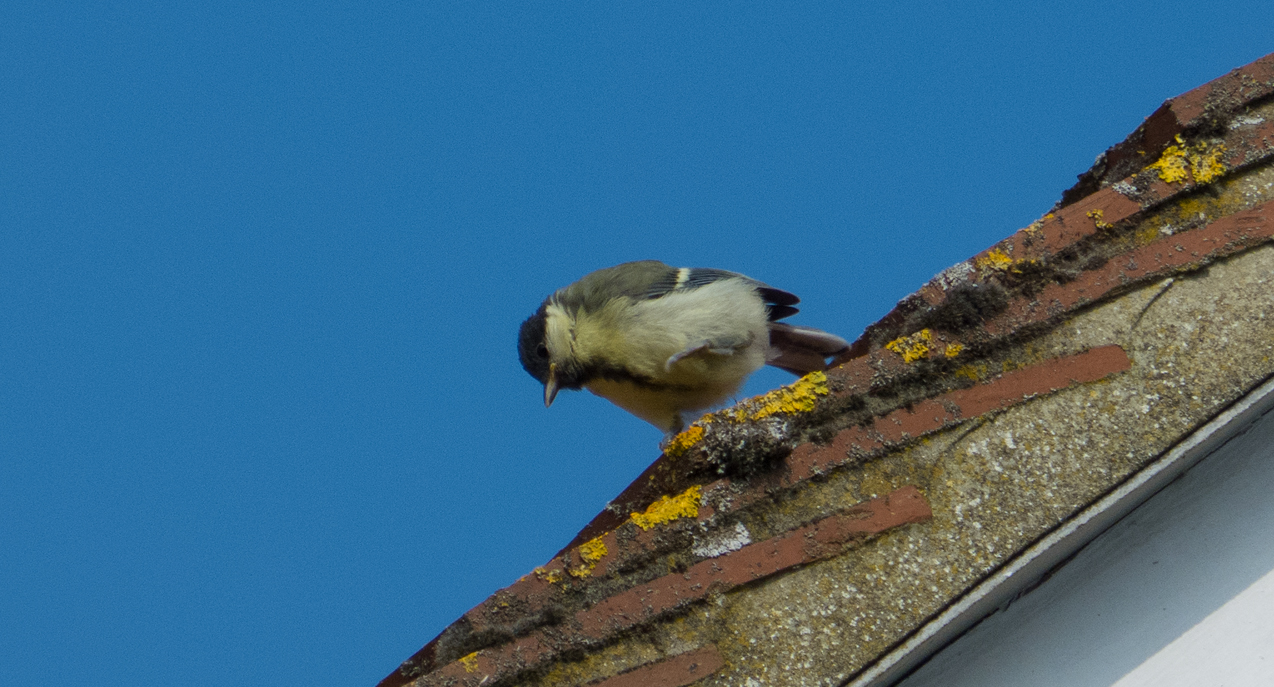 There were a great many alarm calls as I came to the little ancient pathway (now made largely redundant by a tarmac pathway the other side of the hedge): 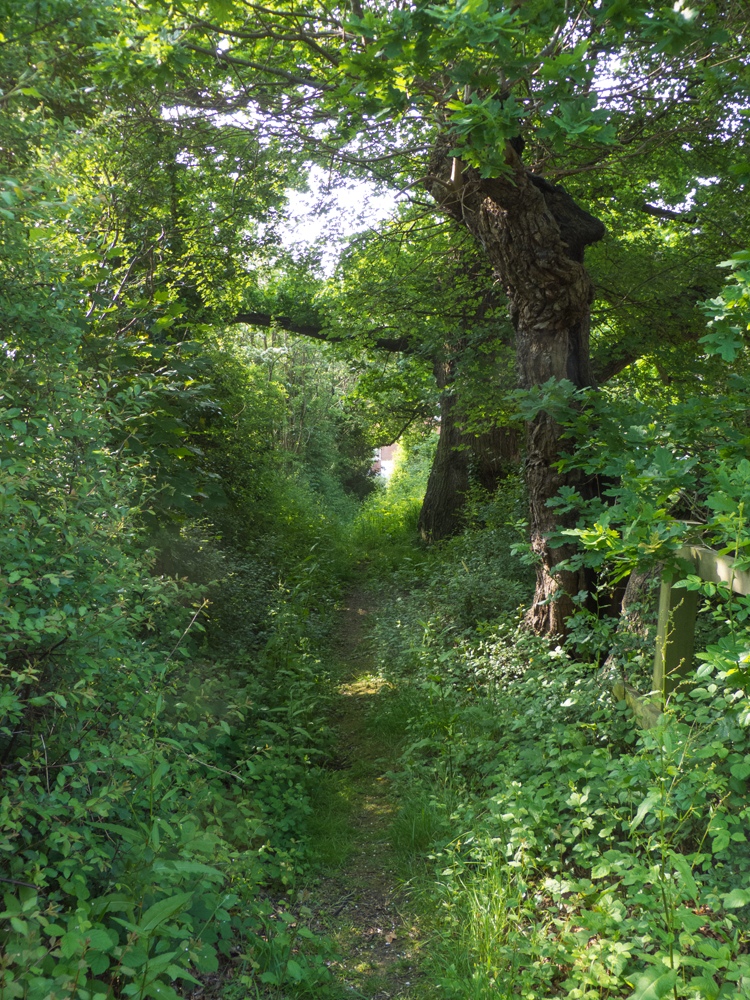 It soon became obvious why. Just along this 100 m stretch, the local hunting population was prowling: 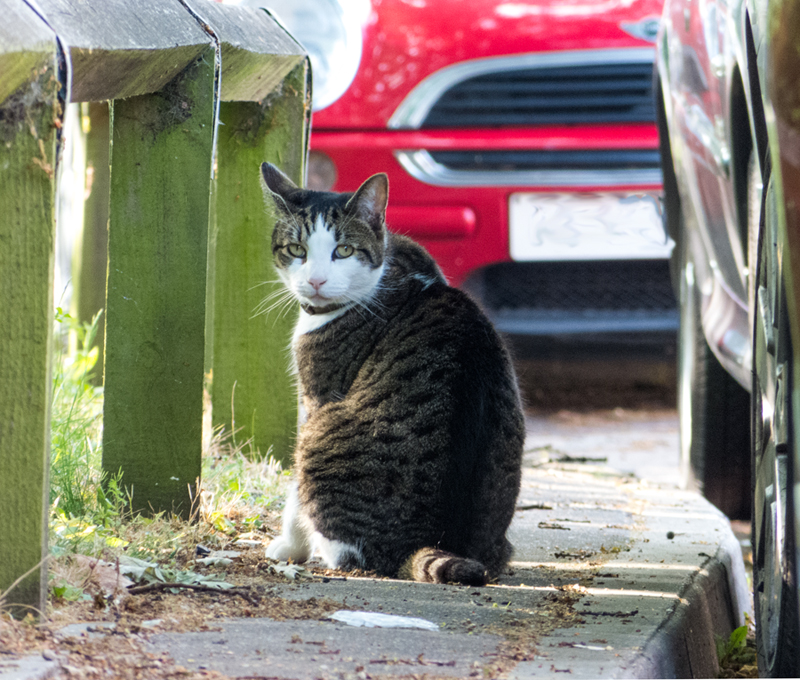 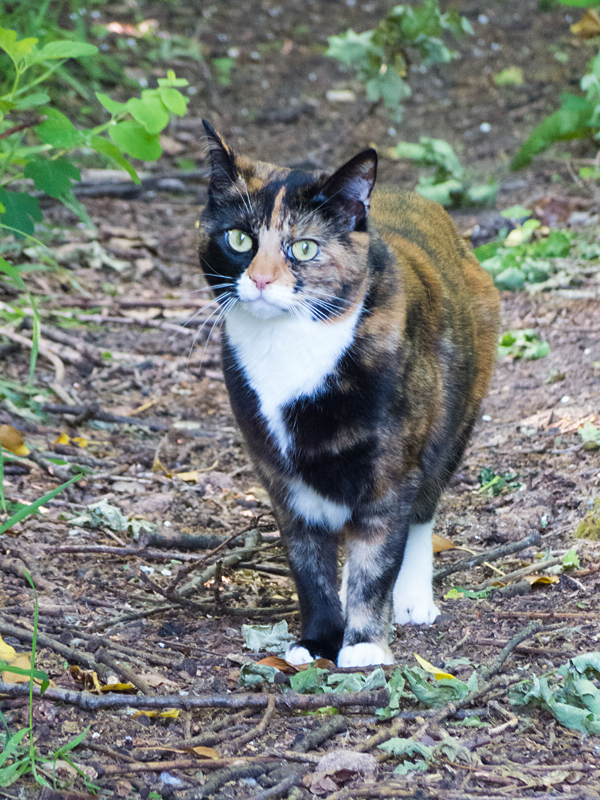 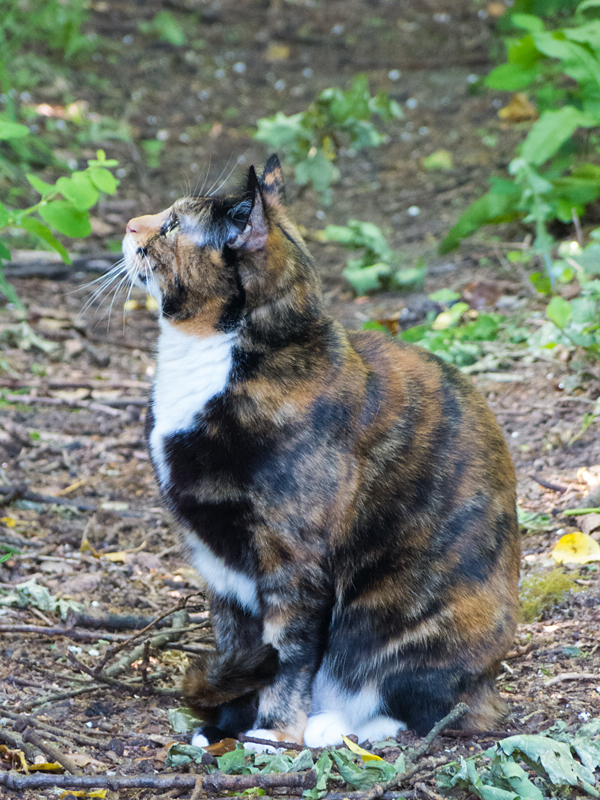 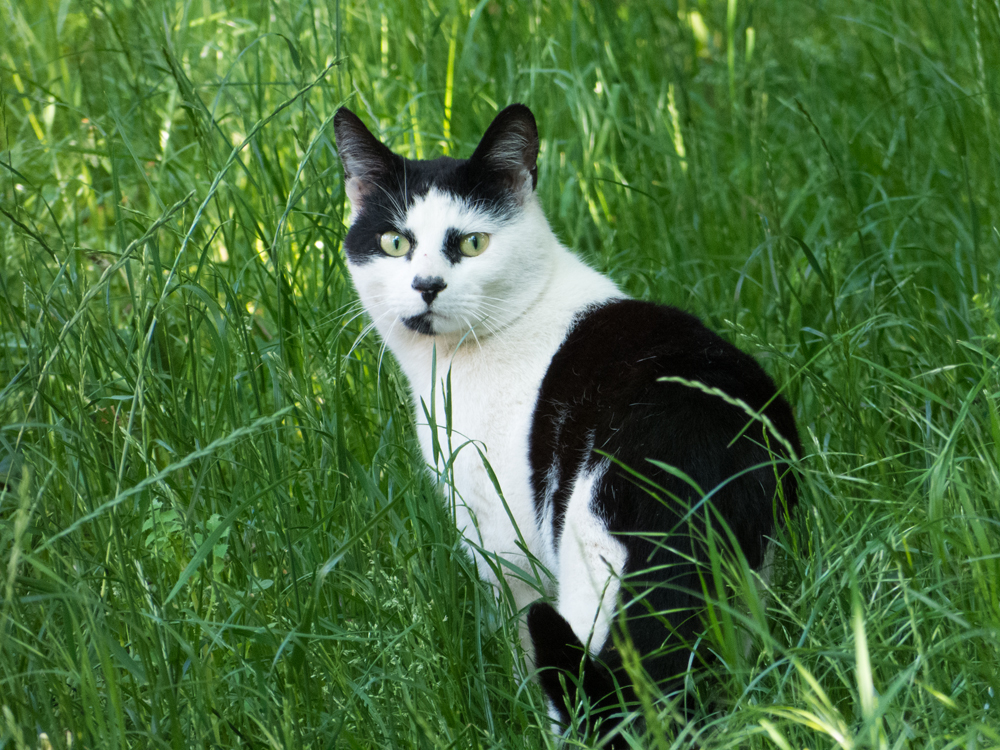 In the woody shade of the ancient pathway there is a surprising variety of plantlife, including wood avens (Geum urbanum) now fully in flower. After flowering, the seeds have large hooks which catch in the fur of passing animals and so are spread more widely: 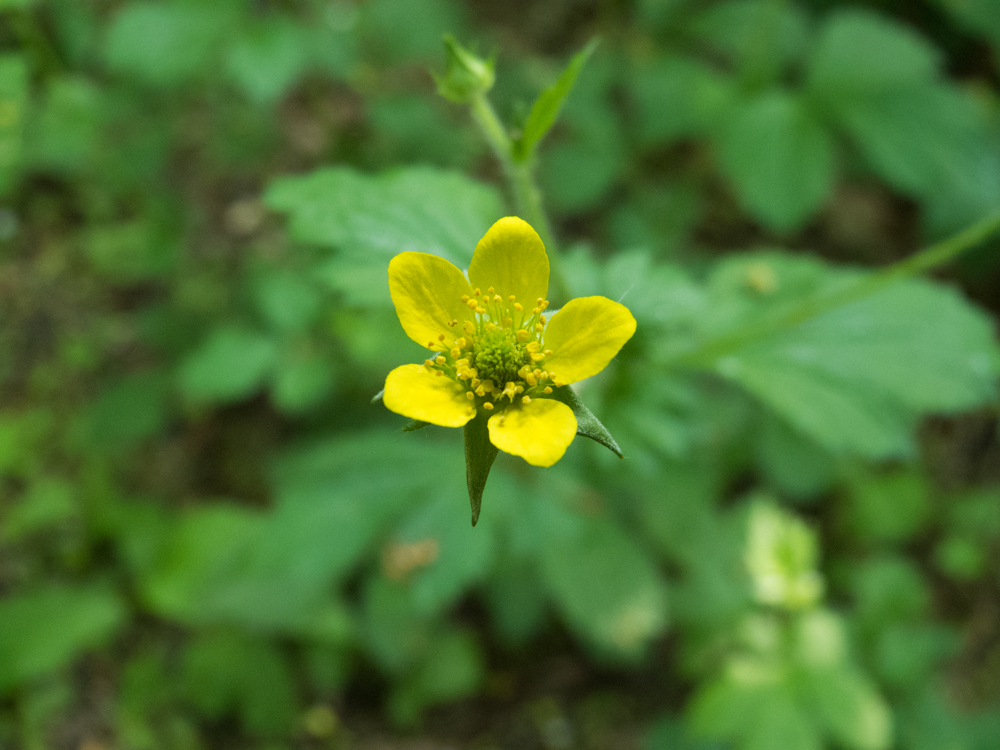 Some of the oaks along this ancient way are quite incredible in their gnarled and hollowed-out old age. This one still has a largely intact trunk, but the tangled form of the branches above a huge stump suggest that it has had a long history of pollarding: 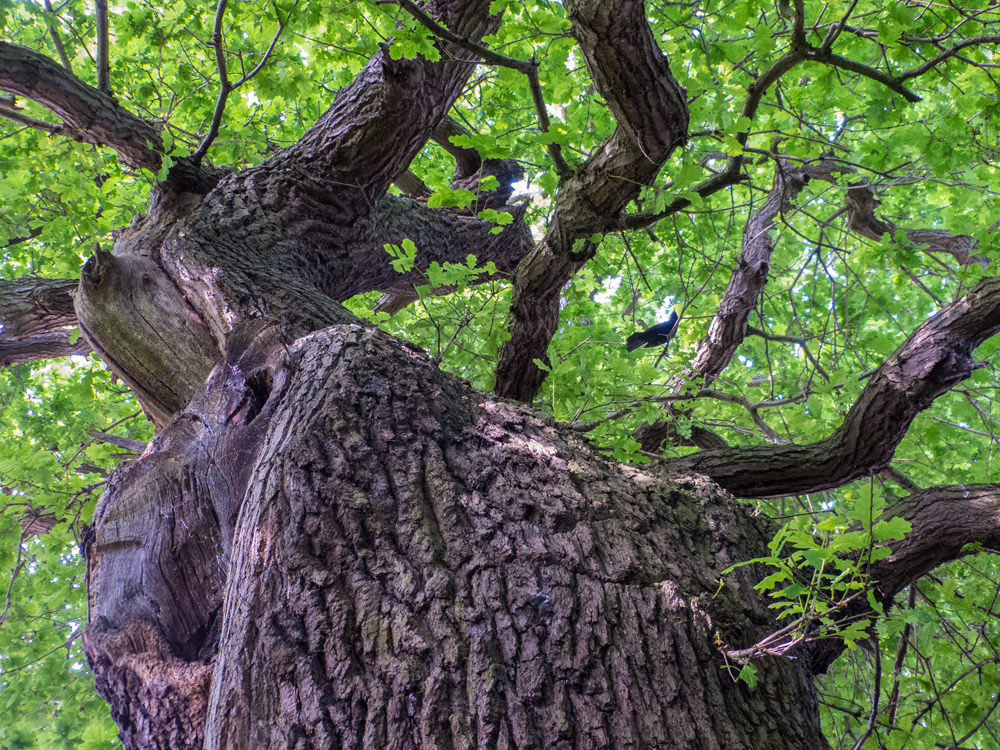 Emerging from the ancient lane I spotted a blue tit performing acrobatics under the eaves of a block of flats, probably looking for spiders and sleeping moths: 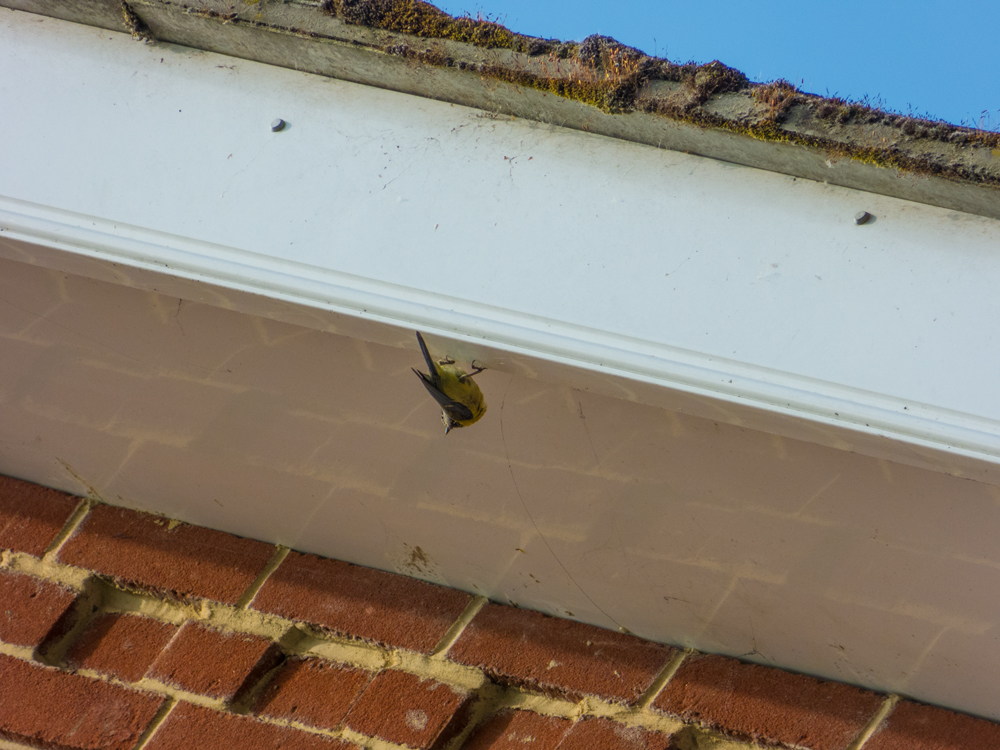 But then a little further down the hill I came across this wonderfully acrobatic magpie, doing the same thing:

Heading back up the hill after being shorn, I spotted this collared dove, obviously extremely proud of having found something exceptionally pleasing with which to decorate its nest: 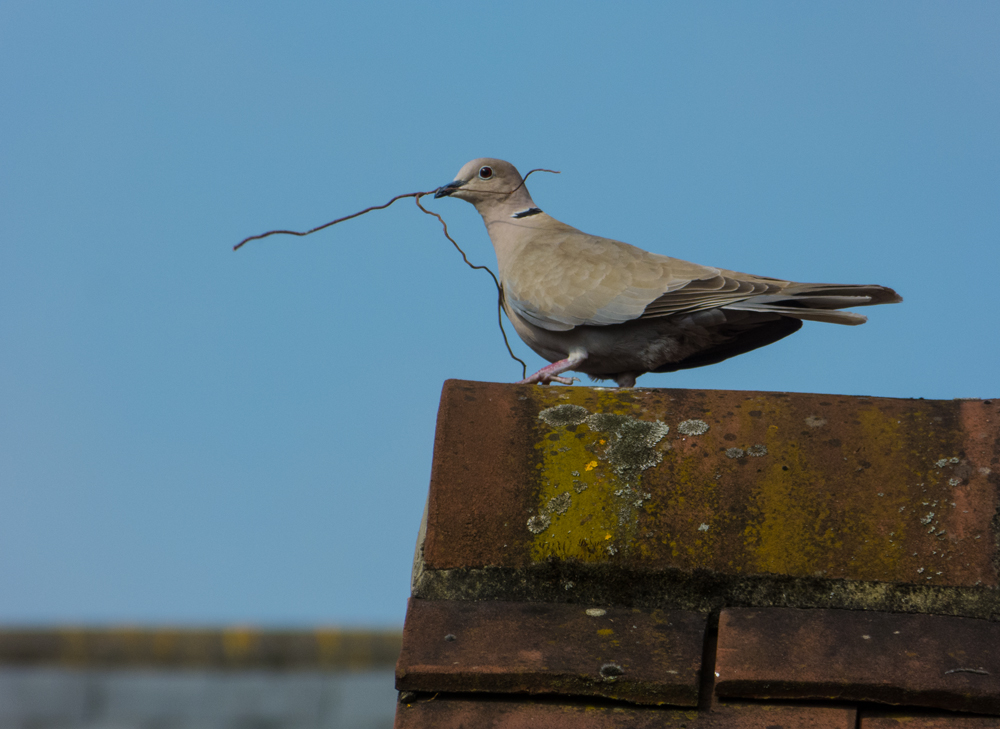 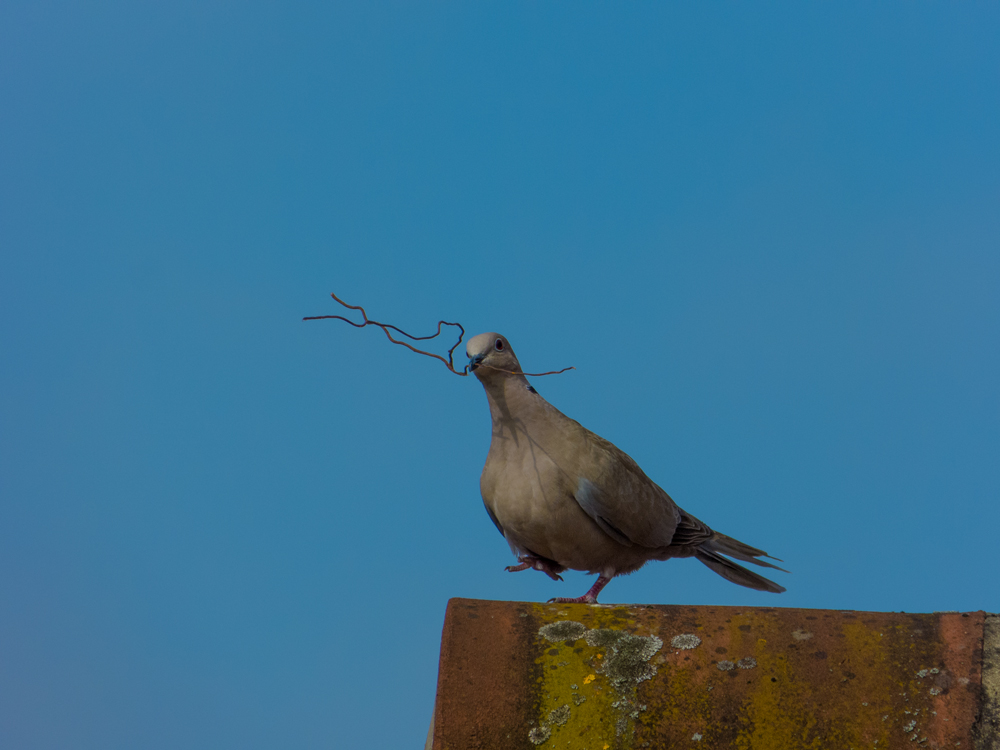 The poppies are also now in full flower – but their flowering is a brief affair because the petals are so fragile – which makes them even more suitable as an emblem of youth cut down in battle: 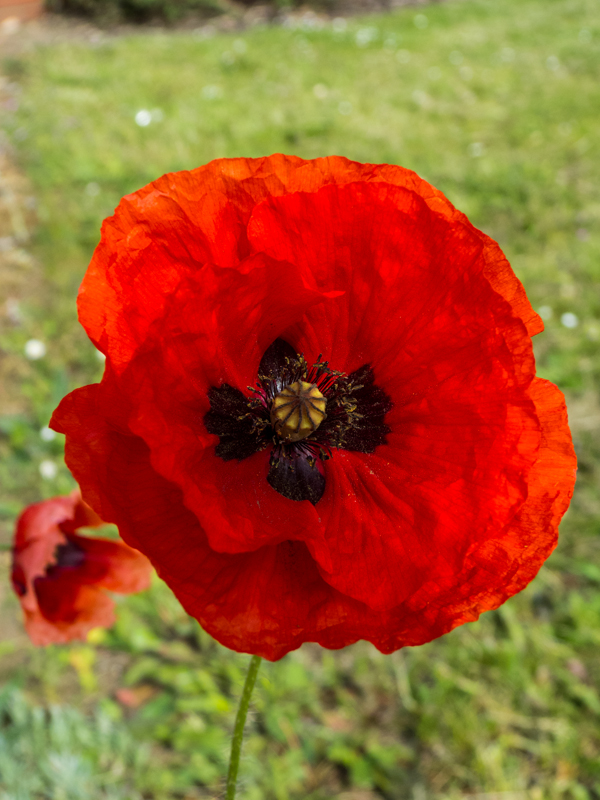 In the gardens, the ornamental roses are also in full bloom: 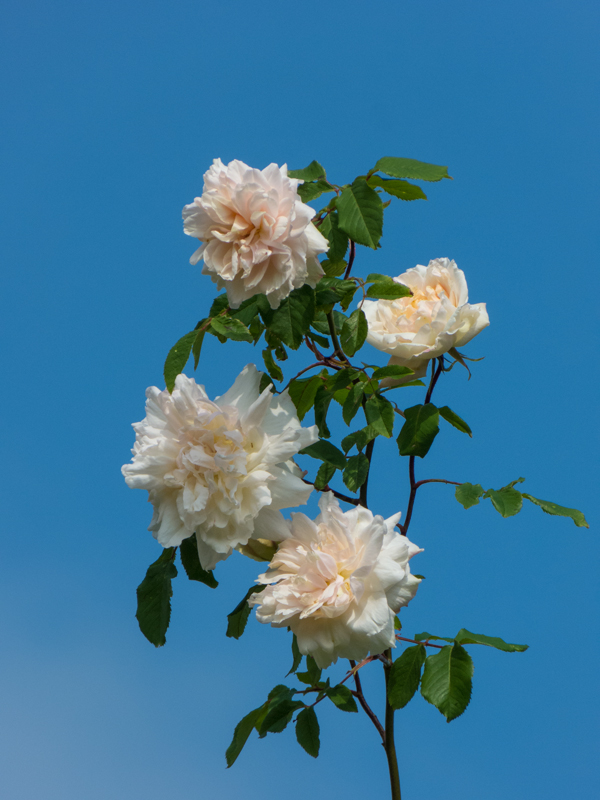 And so we glide gently into summer…