Catching up somewhat on my backlog of wildlife/landscape photos, I had a brief detour through the green lanes of Colchester and Myland the other day on a quick trip down to The Range – a source of great art materials and much besides – not really expecting anything but just carrying the camera in case. In the event, a number of really interesting things were encountered.

The green lanes are really just gaps between things like industrial estates, railway lines and housing estates, but they are quite magical in their own way: 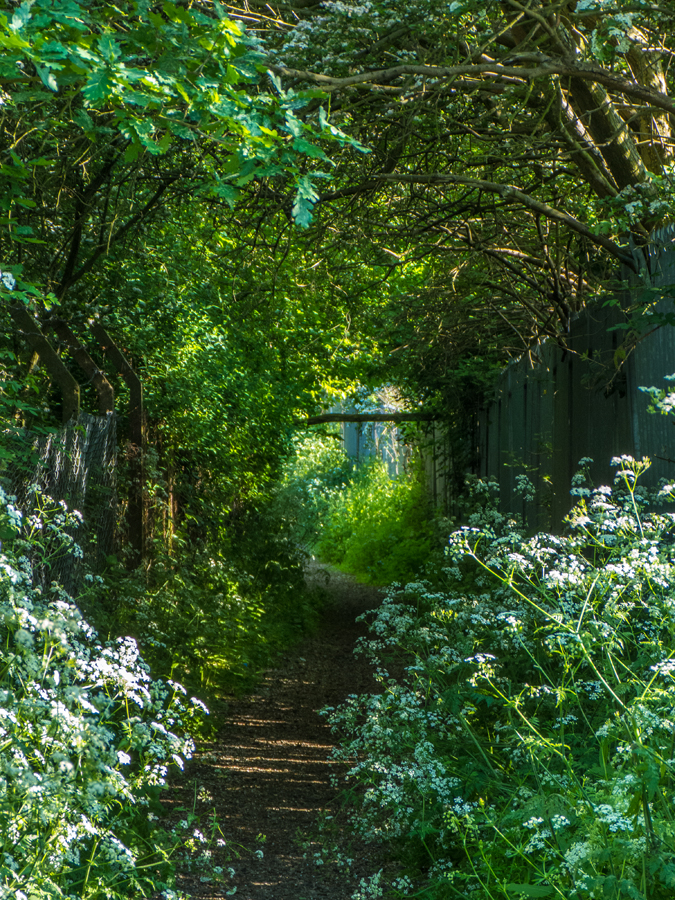 Walking along this particular one I was struck by this obviously decaying yet still alive tree, with two enormous clumps of yellow bracket fungus. The tree was still happily bursting into leaf (and I couldn’t work out the species – it looked rather exotic – and in fact fungus and insect grubs may eat out the middle of a tree to make it hollow, counter-intuitively enough thus making it stronger because it is lighter but still a strong cylinder so able to resist gales more. The Great Storm of 1987 destroyed huge numbers of relatively young trees, but many older trees survived because their trunks and larger branches were hollow and thus had less inertia when swung violently by the gusts – all thanks to fungi and xaproxylic invertebrates (dead-wood insects): 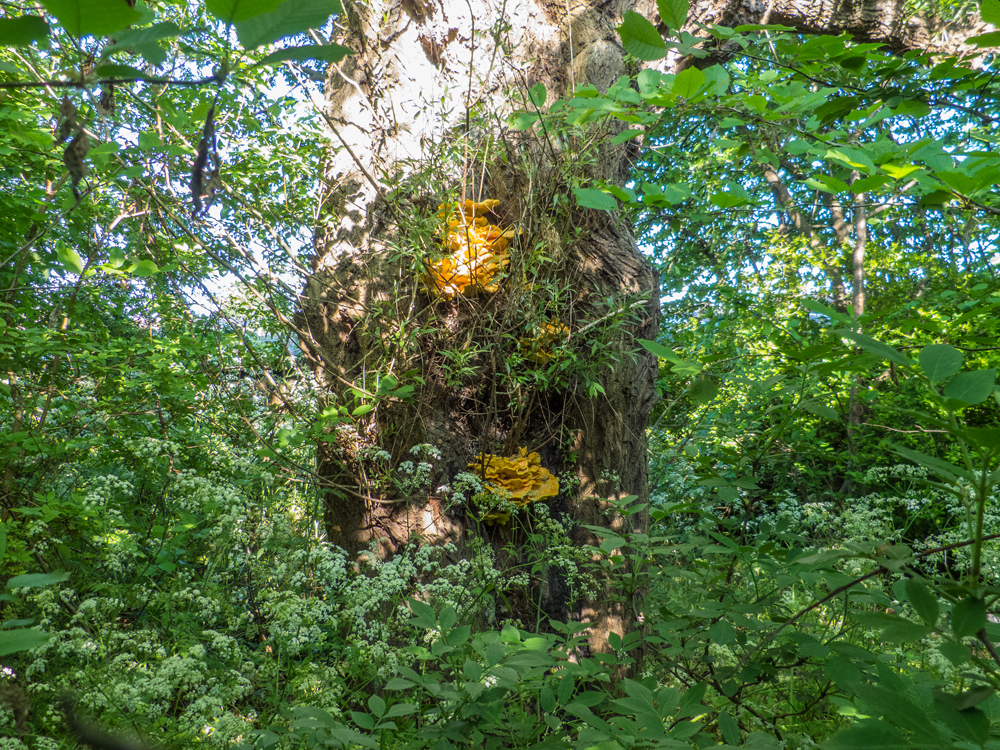 The fungus was, I think, yellow bracket fungus (Laetiporus sulphureus), or ‘Chicken of the Woods‘: 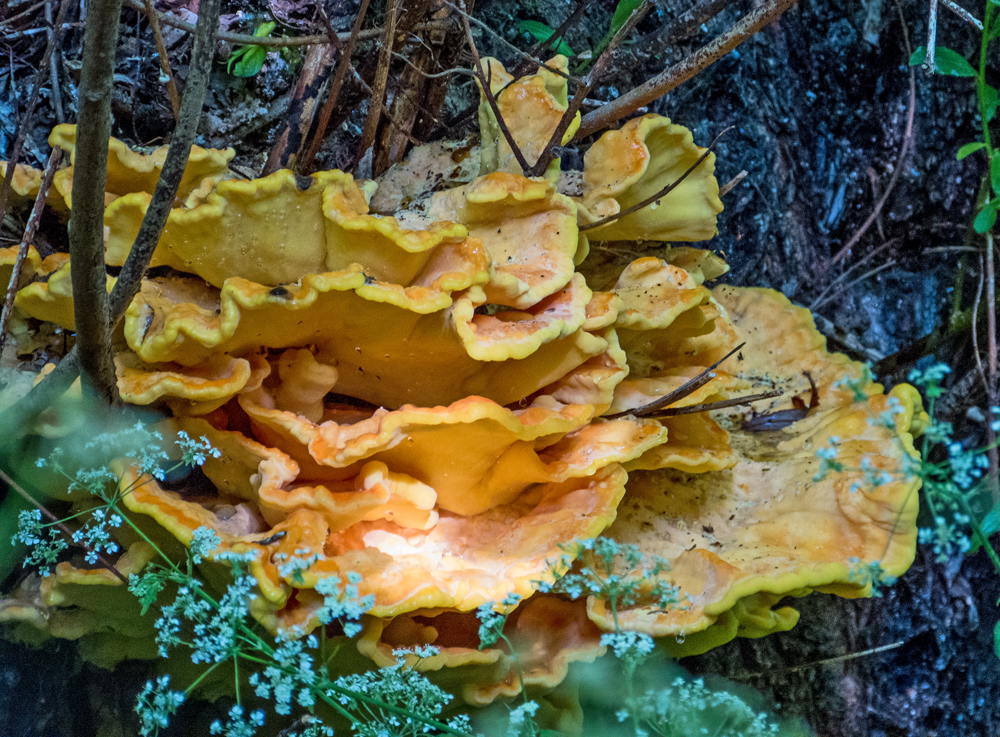 What was fascinating was that it was positively dripping, although there had been no rain for a couple of days. This moisture was the sap of the tree being exuded by the fungus: 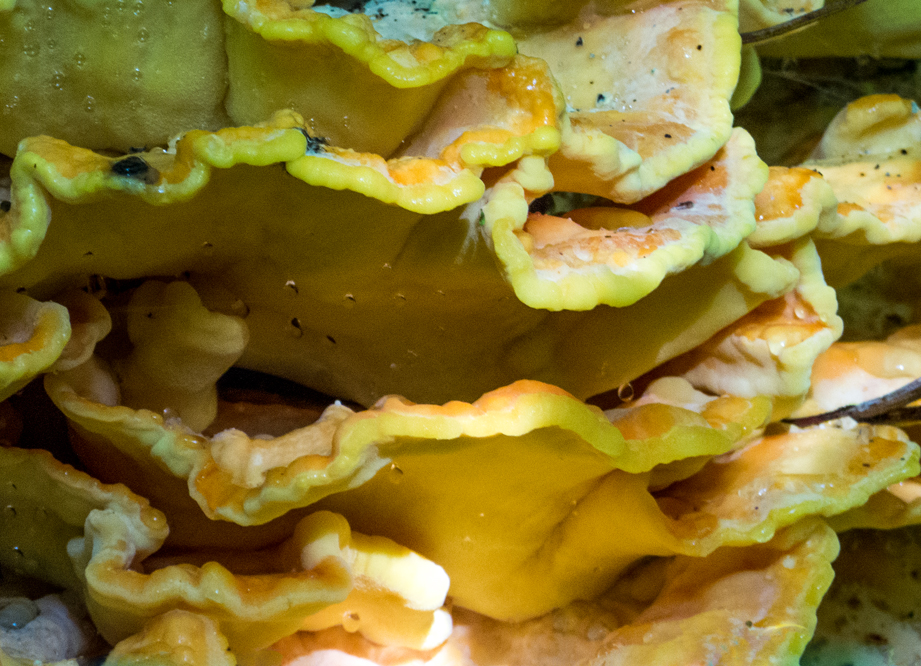 Along the edge of the railway line there were a few bramble leaves left from last season, but they had turned fantastic colours and were glowing in the sunshine: 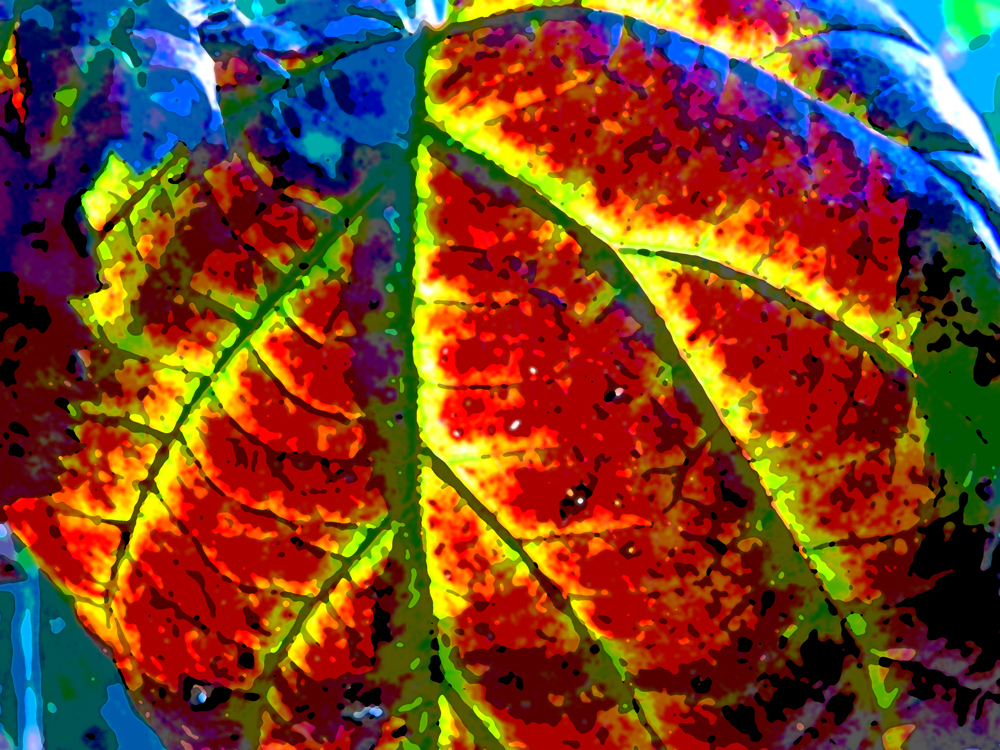 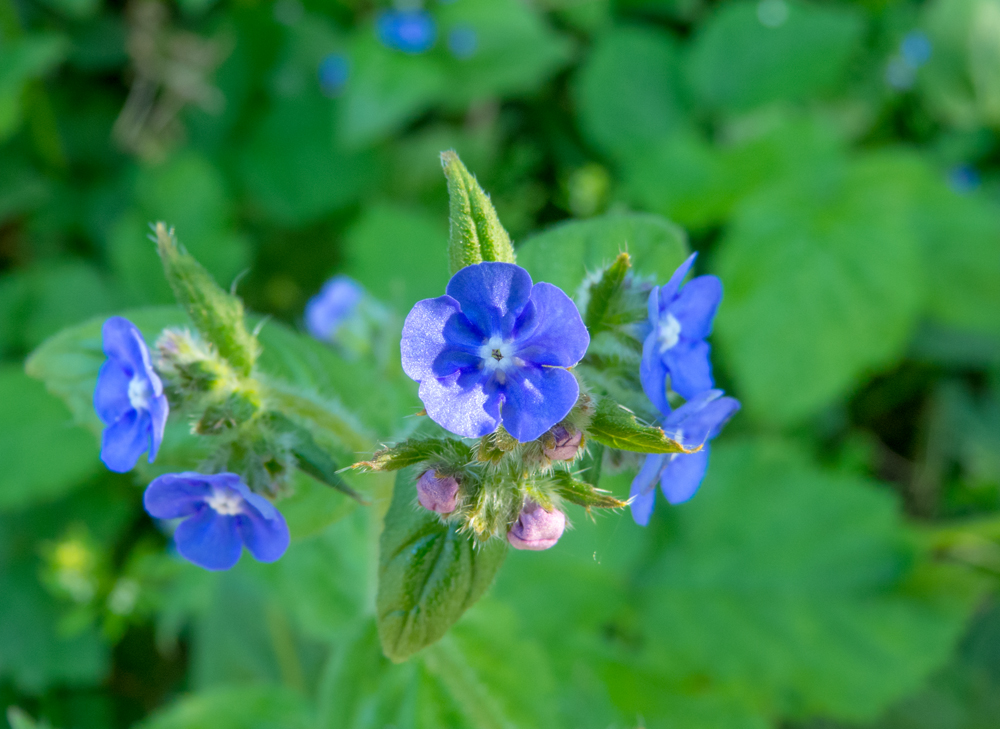 Walking up towards Asda, the coppery leaves of the roadside bushes (are they some form of elm?) were also catching the sunlight: 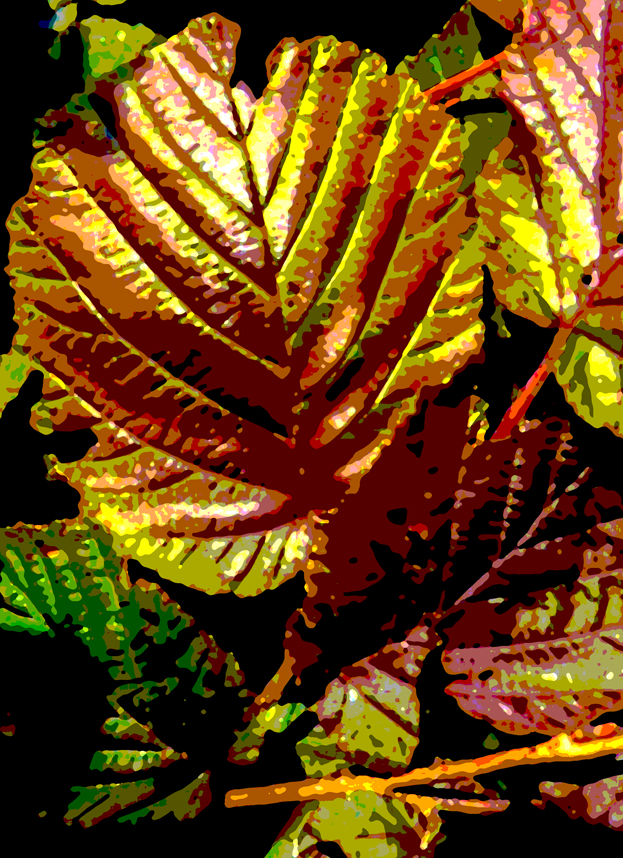 Then at Asda I watched an entertaining scene where a crow has taken up residence in a tree within the car park and clearly regards any car which parks under that tree as an inalienable part of its territory, loudly declaring the fact and chasing off any birdlife with the temerity to even think of approaching the said car. I’ve watched this crow for several days now, and it doesn’t matter what sort of car – it just needs to be under that particular tree. Very amusing: 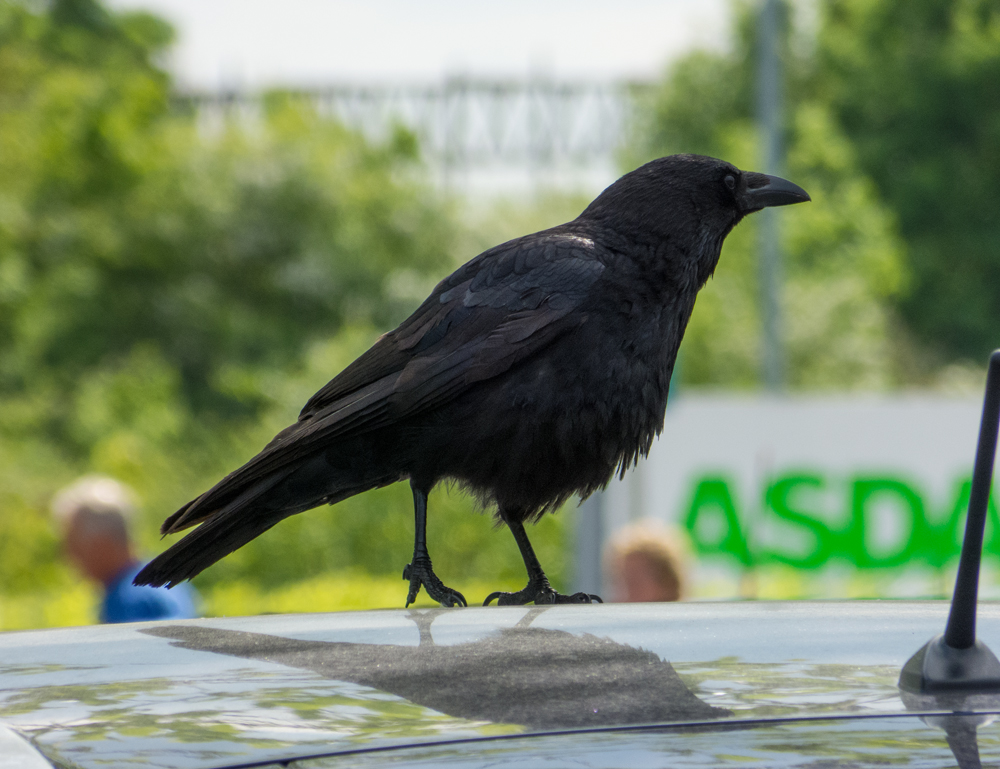 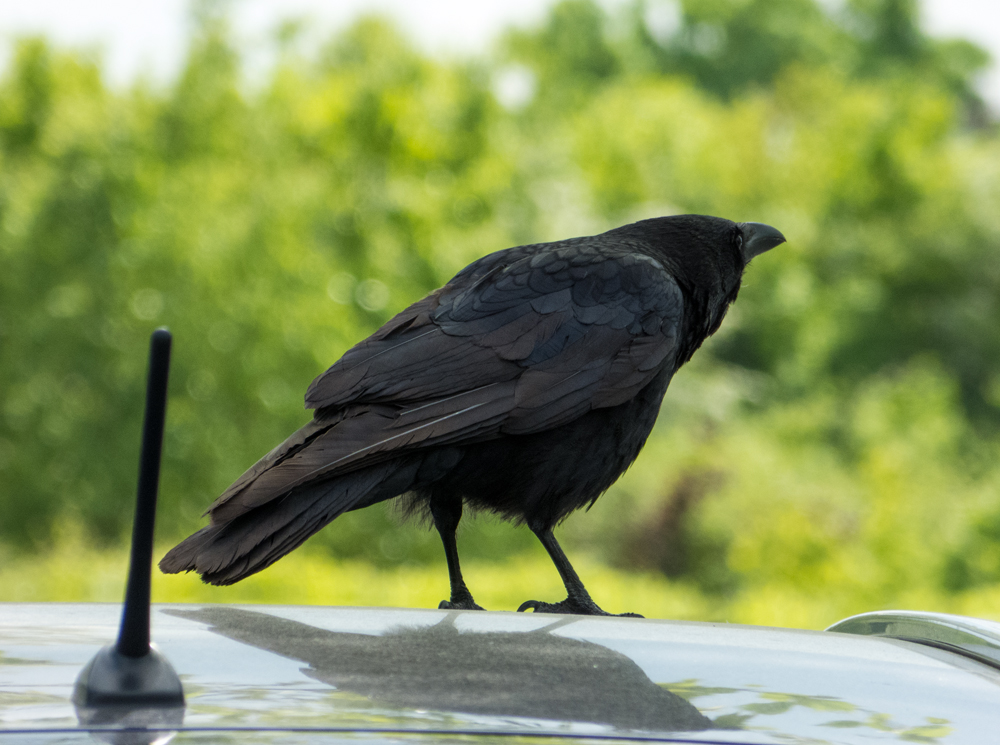