Days of grey drizzly autumn rains….. but amidst these there has been a whole array of other skies which I’ve picked up while travelling, yet again, to Cumbria, then on the usual run between Colchester and London’s Royal Docks, although one or two scenes have been far from usual.

Working late to prepare material for my talk in Cumbria, the moonlit campus which confronted me as I finally emerged from our sustainability lab resembled a rather other-worldly scene from a science fiction story: 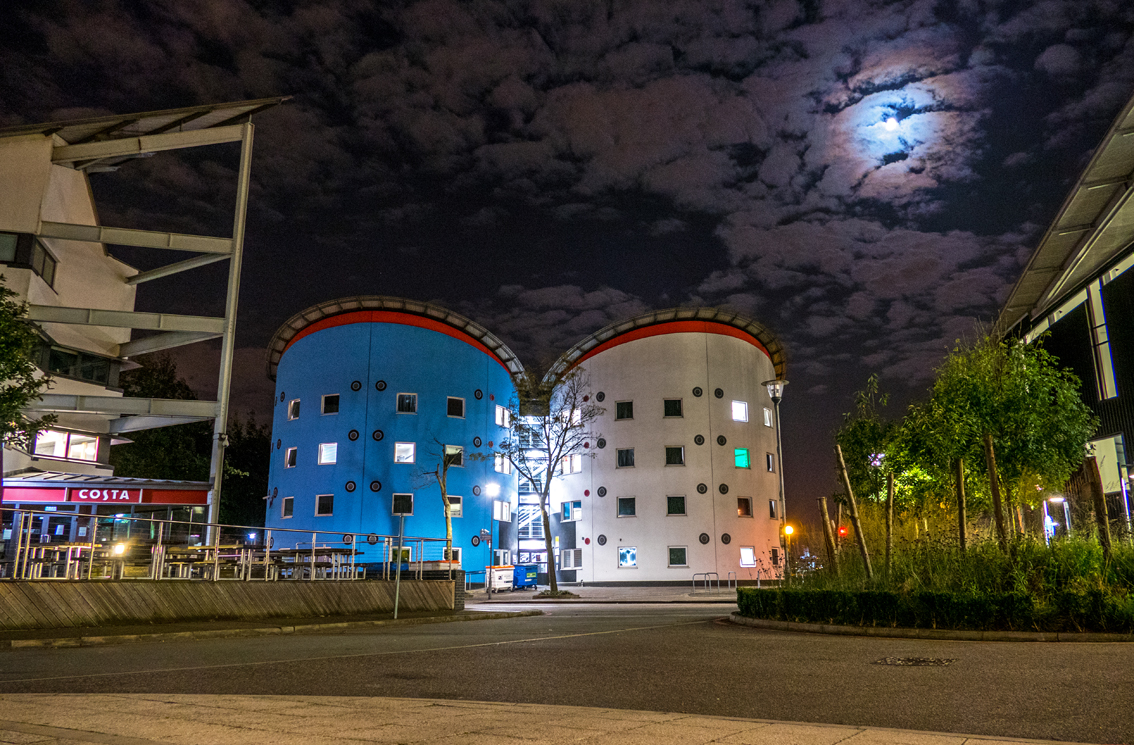 Much of the run to Cumbria on Virgin’s West Coast line the next day was grey drizzle, but a pale watery sun appeared somewhere north of Rugby: 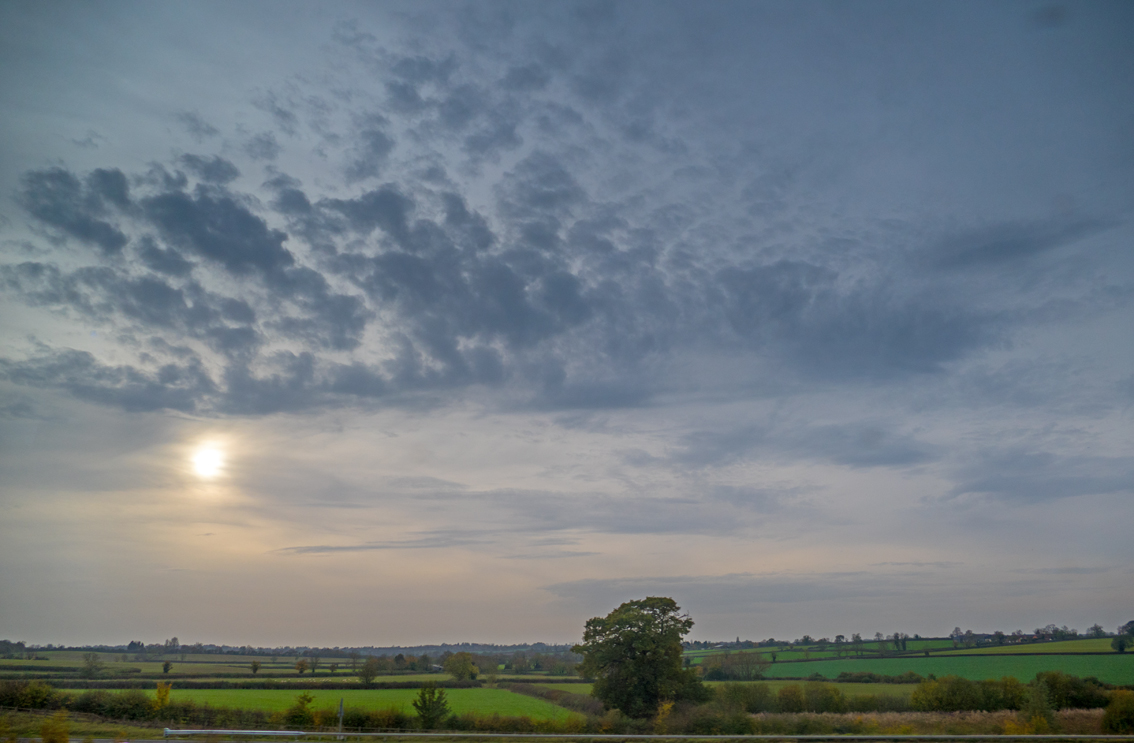 As we passed beneath bands of nimbostratus this watery sun would vanish, to reappear once again behind its high veil of altostratus, but always edging closer to the horizon: 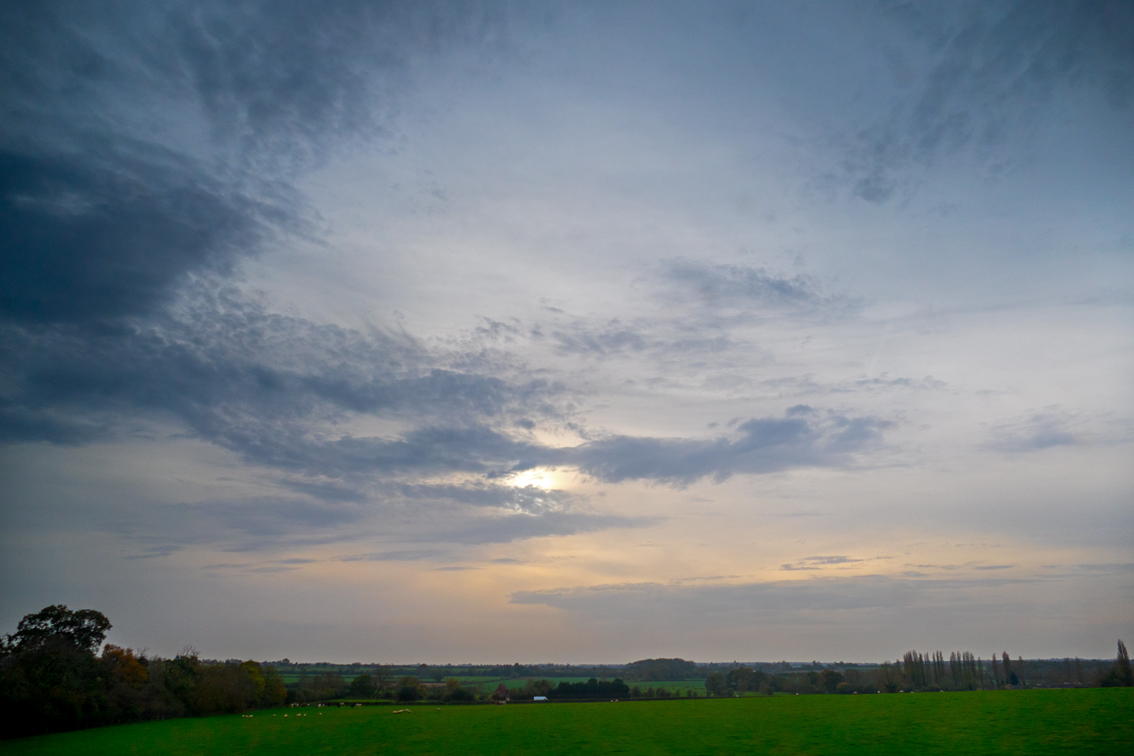 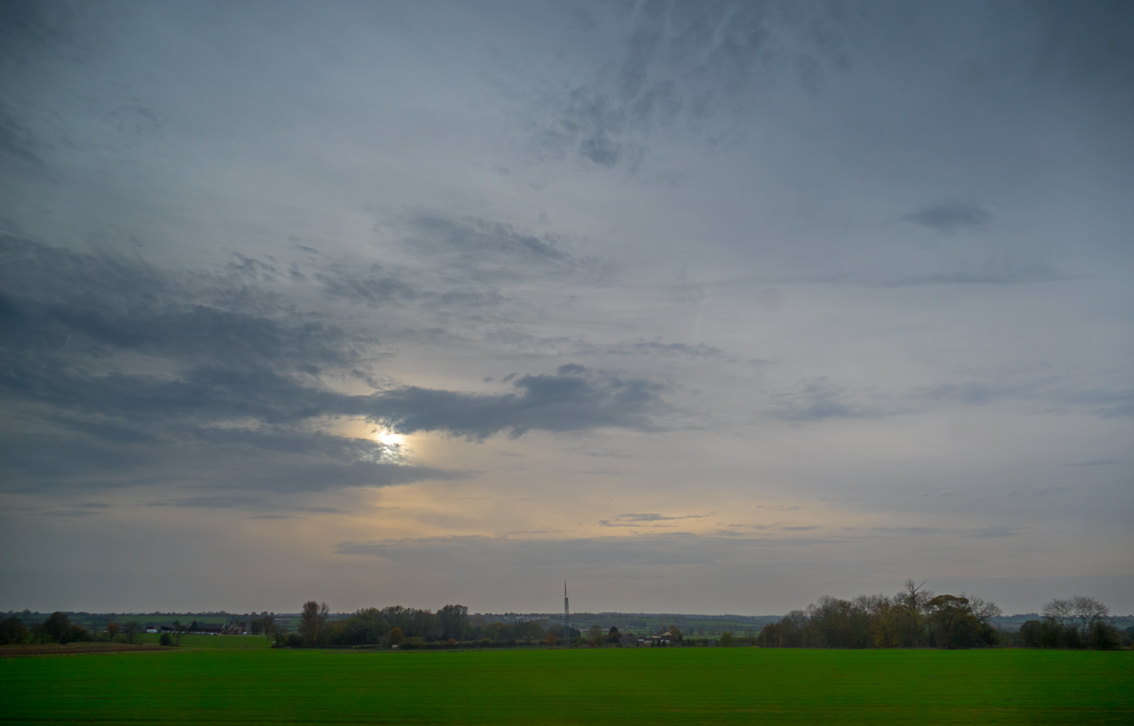 It finally slid from beneath a thick bank of nimbostratus just in time to send out a blaze of gold before sinking below the horizon over Preston:

The return journey was all in darkness (and rain) so nothing to report there, but the following morning brought an extraordinary layer of luminous pillow-like stratocumulus – something I’ve seen only a few times while journeying back and forth, and reminding me very much of various paintings by Edward Reginald Frampton: 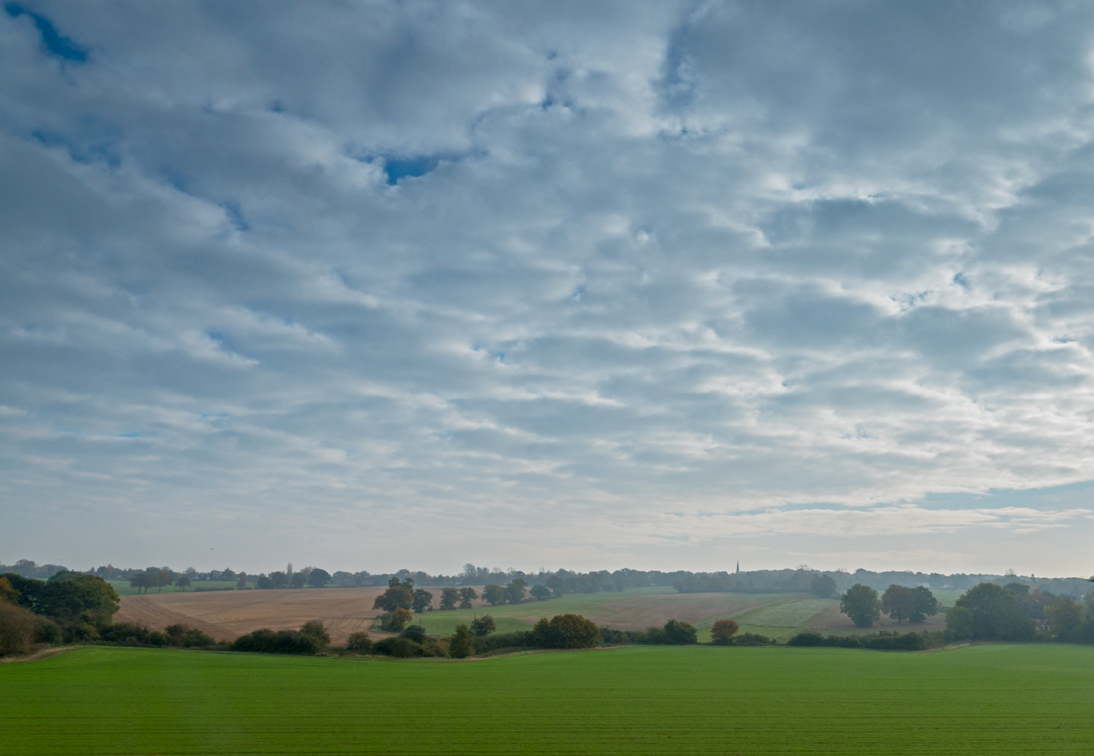 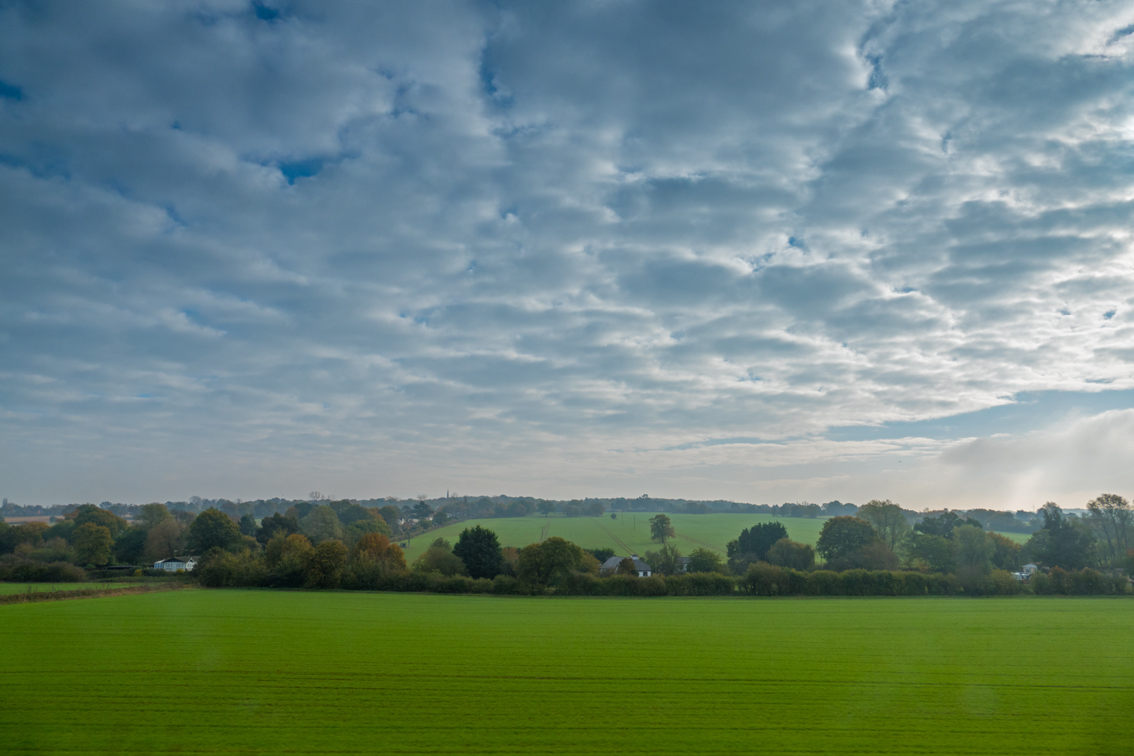 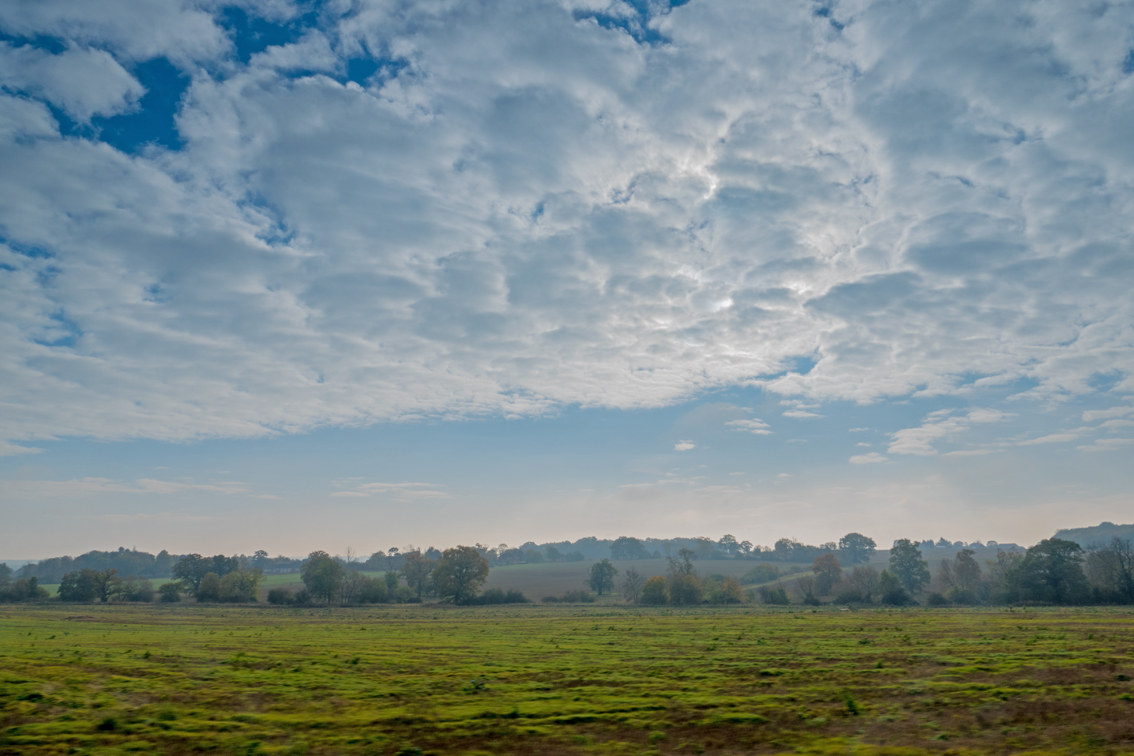 Approaching the Lone Oak at Shenfield, autumn ploughing was obvious: 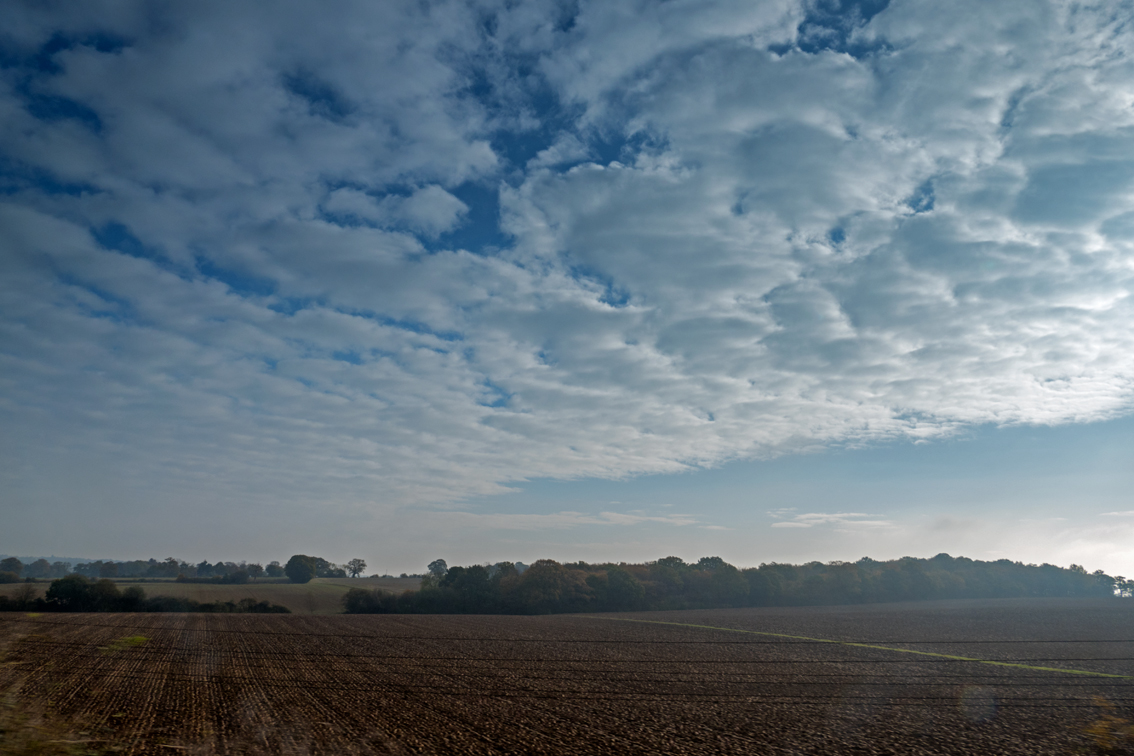 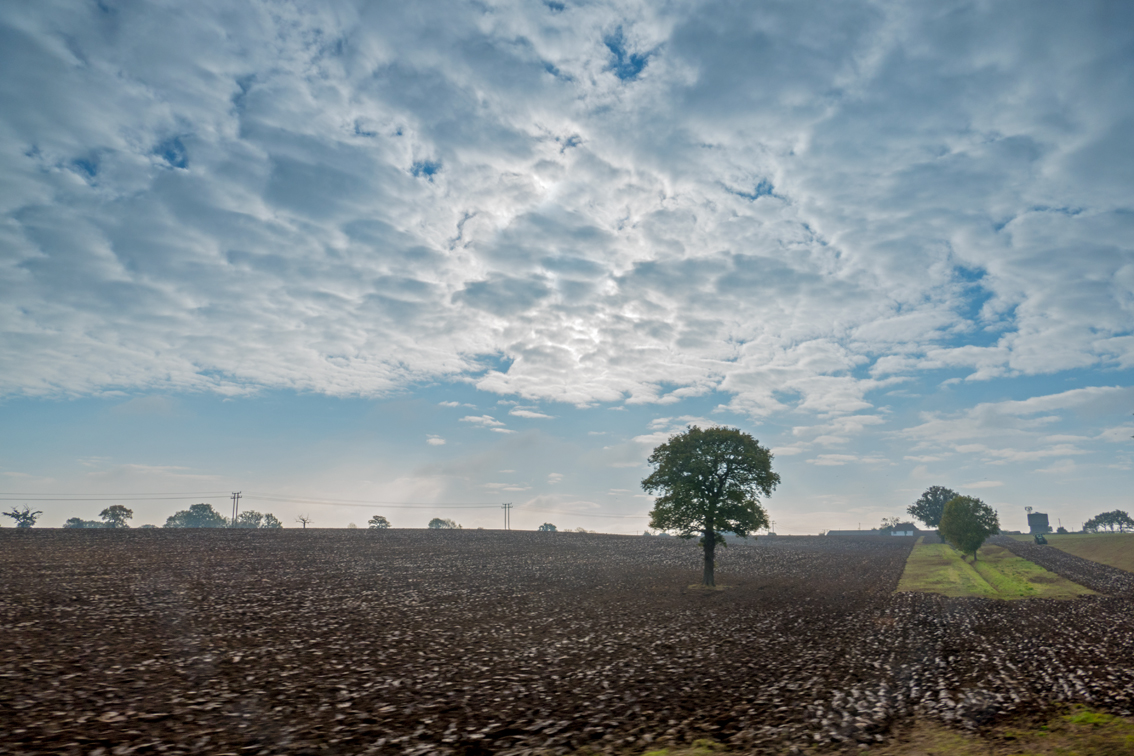 By the time I reached our Docklands Campus the sky was clearing and the sunlit repetition of residence blocks, with Canary Wharf in the distance, was somehow deeply pleasing: 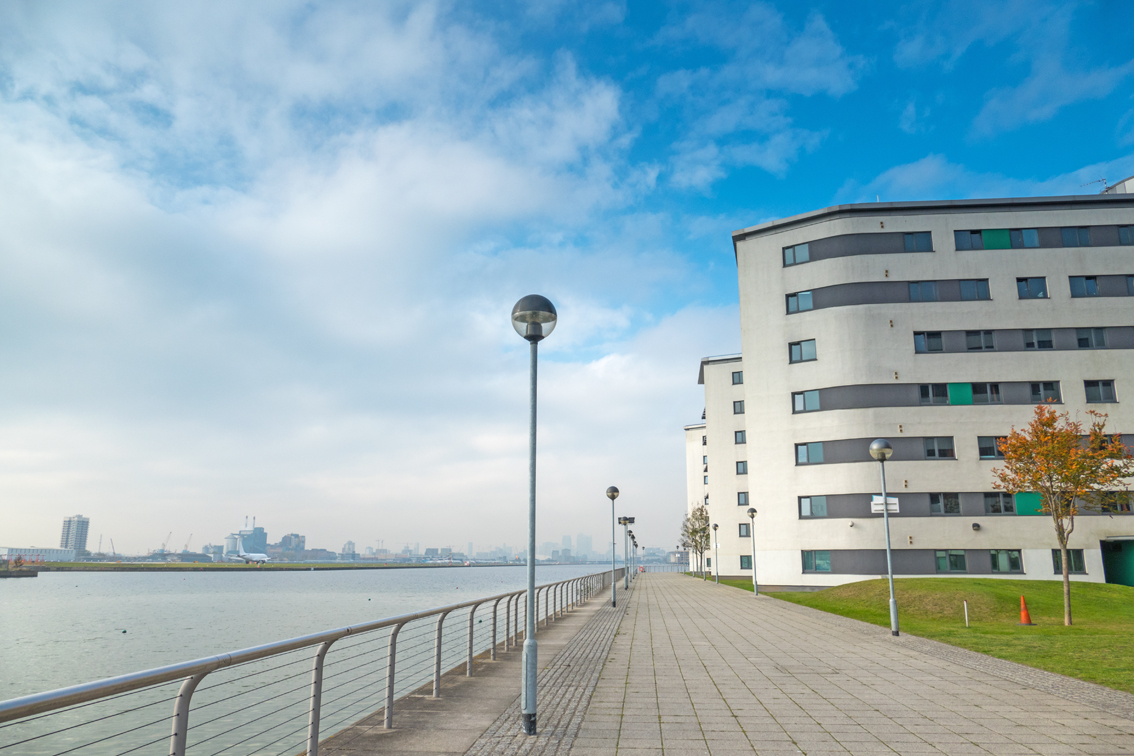 The morning after Guy Fawkes Night saw one of our first frosty foggy mornings:

That, and the next day, were bright but cold: 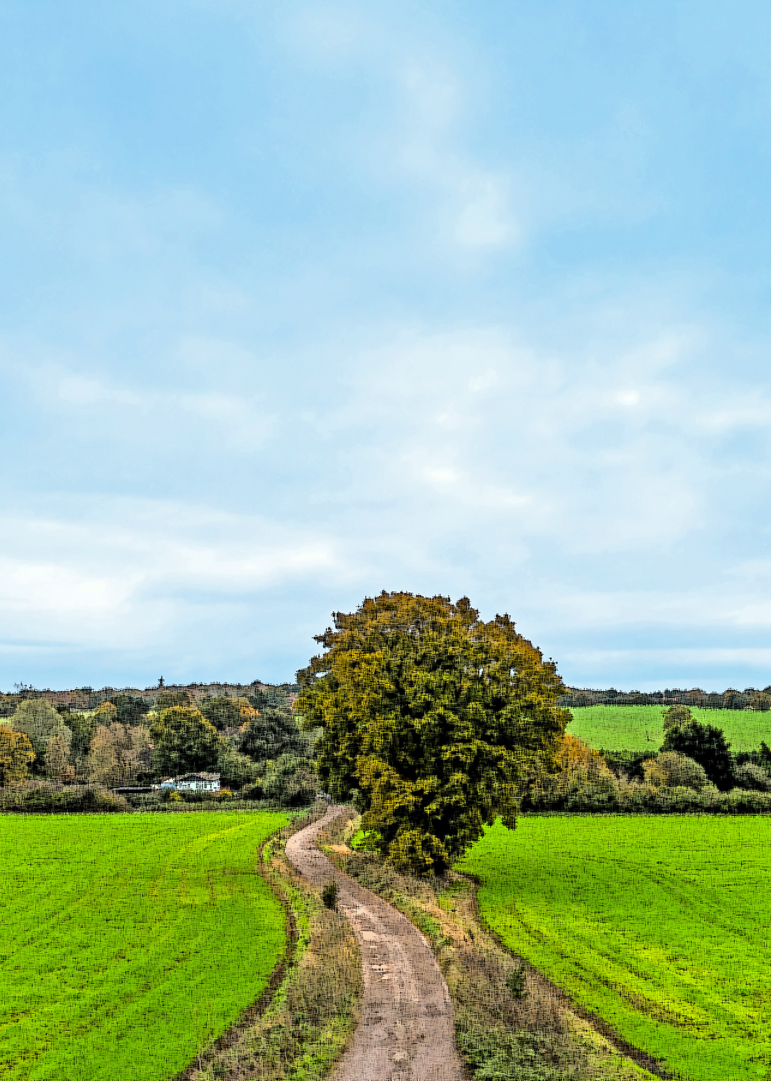 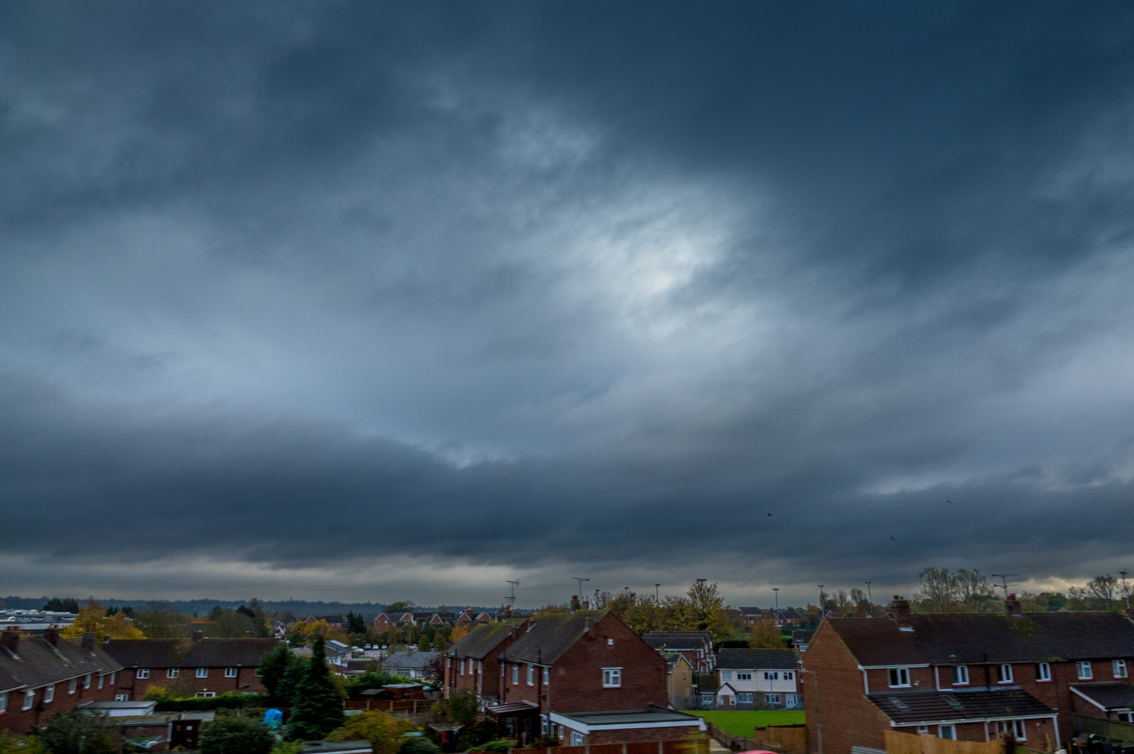 …we left the multiple layers of stratocumulus looming over eastern Essex, to find the two oaks east of Chelmsford surrounded by fresh-geen winter wheat beneath an increasingly blue sky:

The next day began as a kind of painterly melange, with autumn leaves seen from Platform 3 resulting in a Klimt-like explosion of colour: 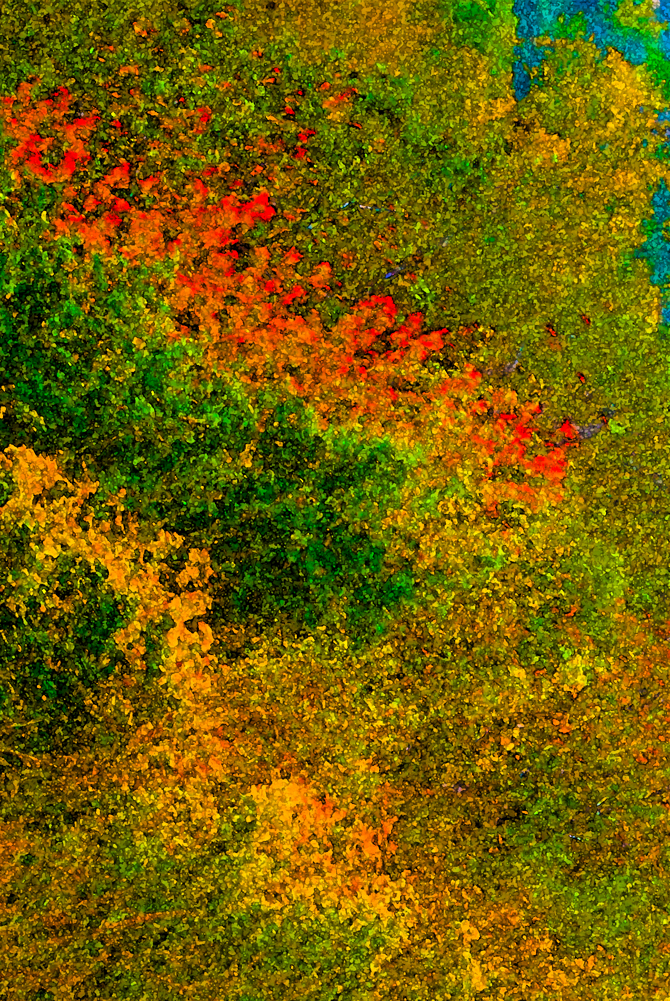 Just out of Colchester, the view across the golf course seemed almost surreal, with the washed-out colours of John Piper or a Paul Nash watercolour, while the slightly eerie snaking paths and un-naturally smooth greens had something of a Giorgio de Chirico or Magritte scene: 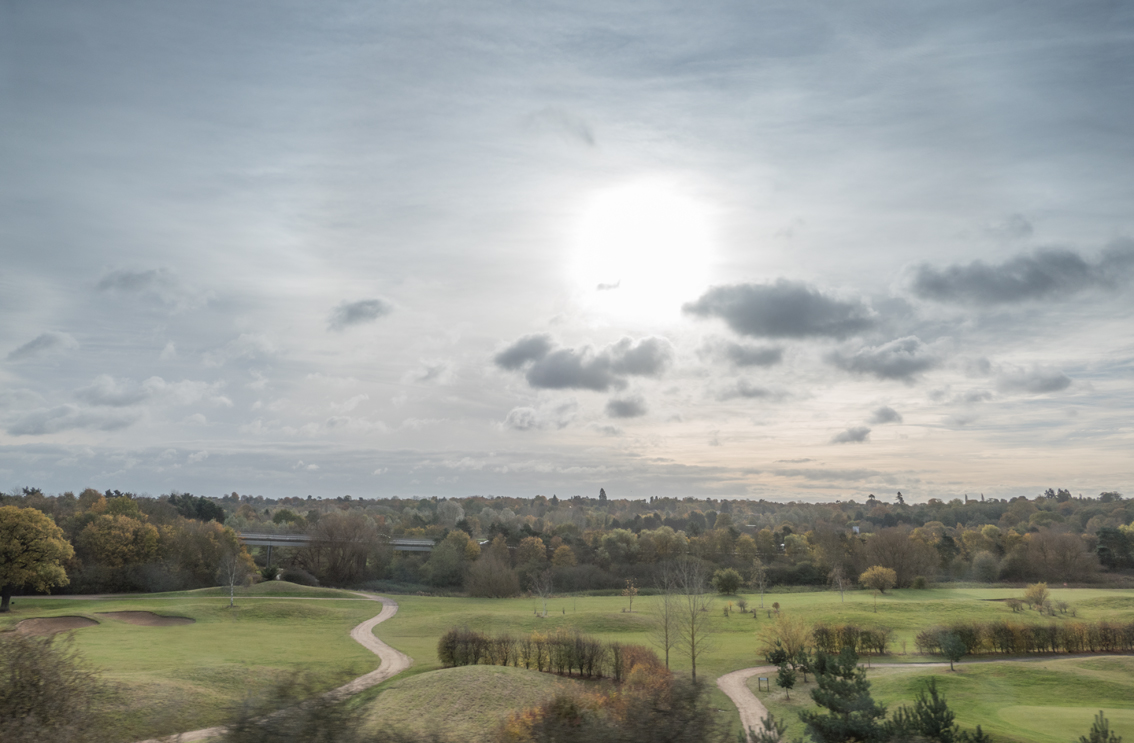 …and with perhaps a nod to the Italian Futurists and British Vorticists, here’s what happens when a goods train passes the other way just as you are about to take a photo of some passing landscape (and makes you jump out of your skin): 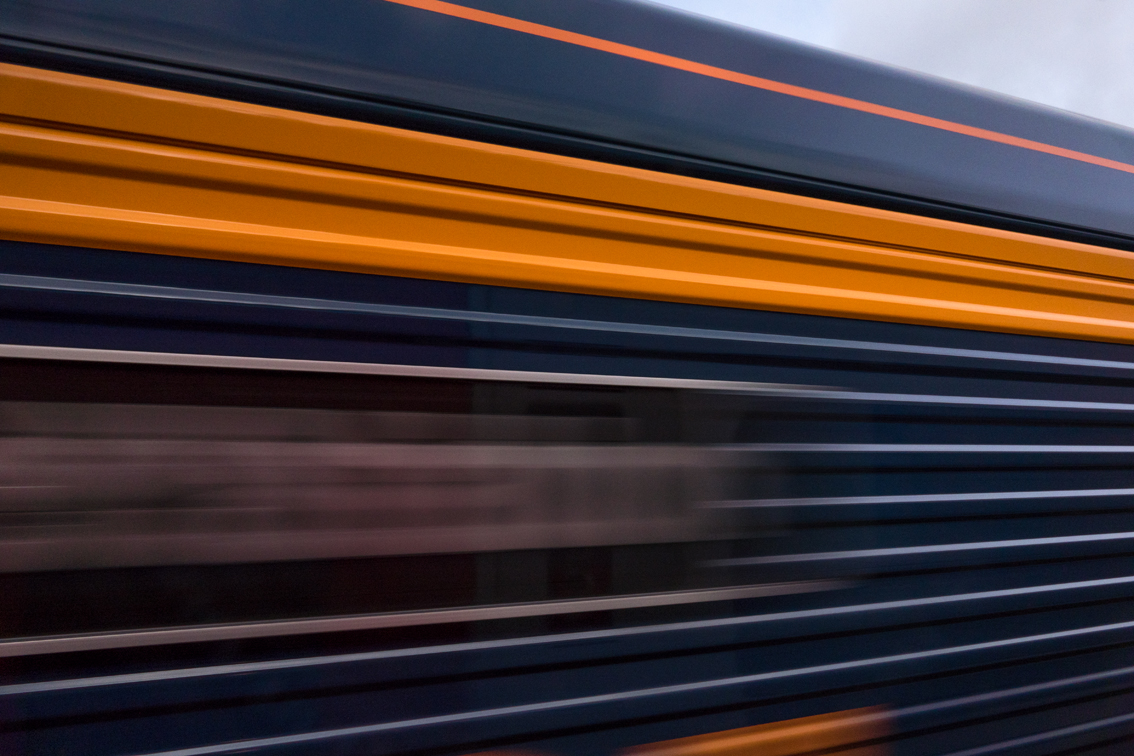 Things then returned somewhat to normal, with a tail of cumulus mediocris draped across the two poplars after Marks Tey: 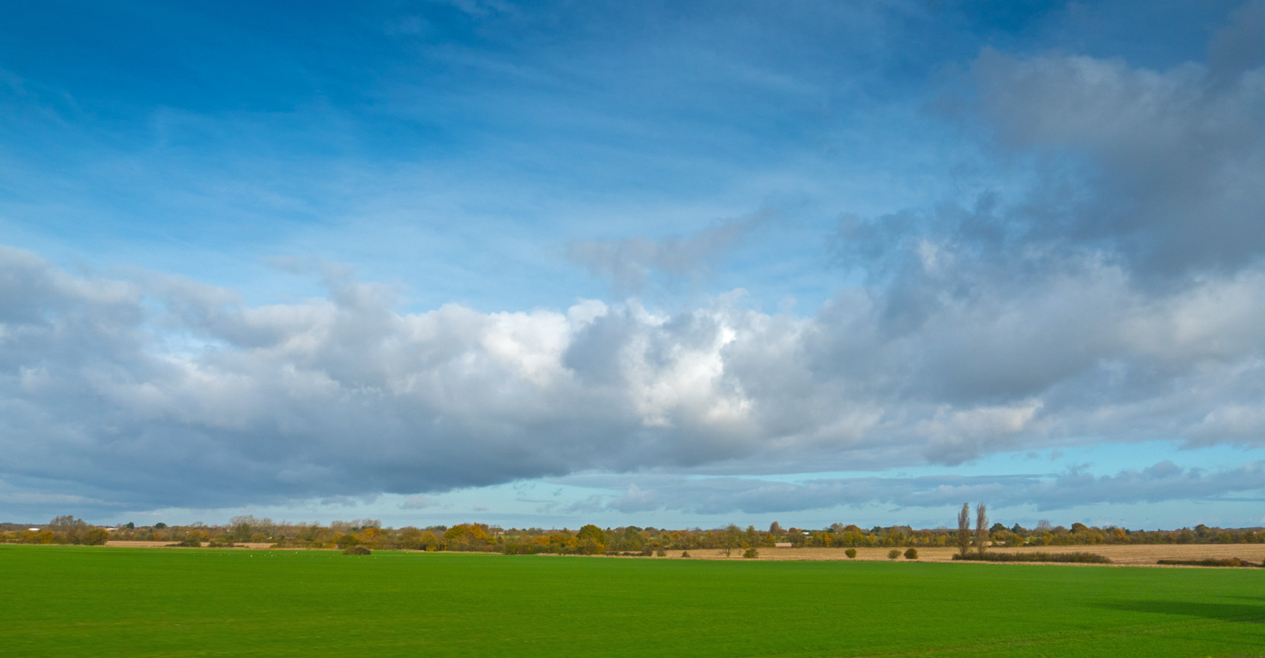 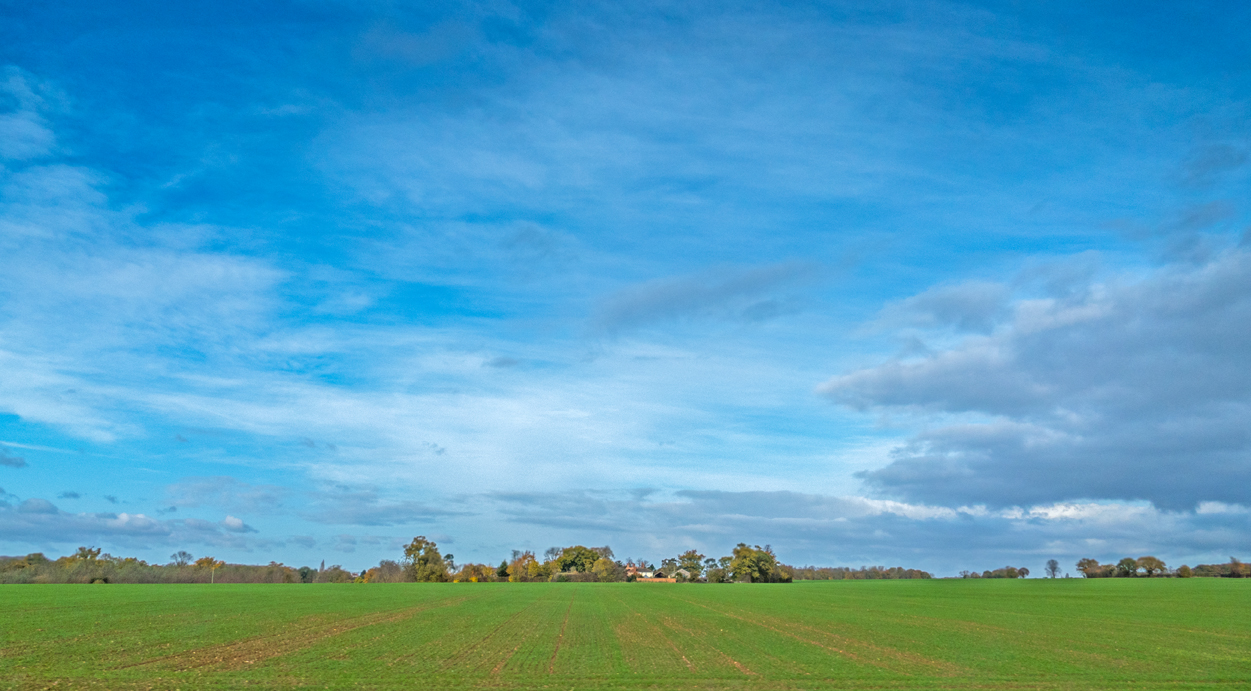 …while another crop entirely is steadily filling the fields to the west of Witham: 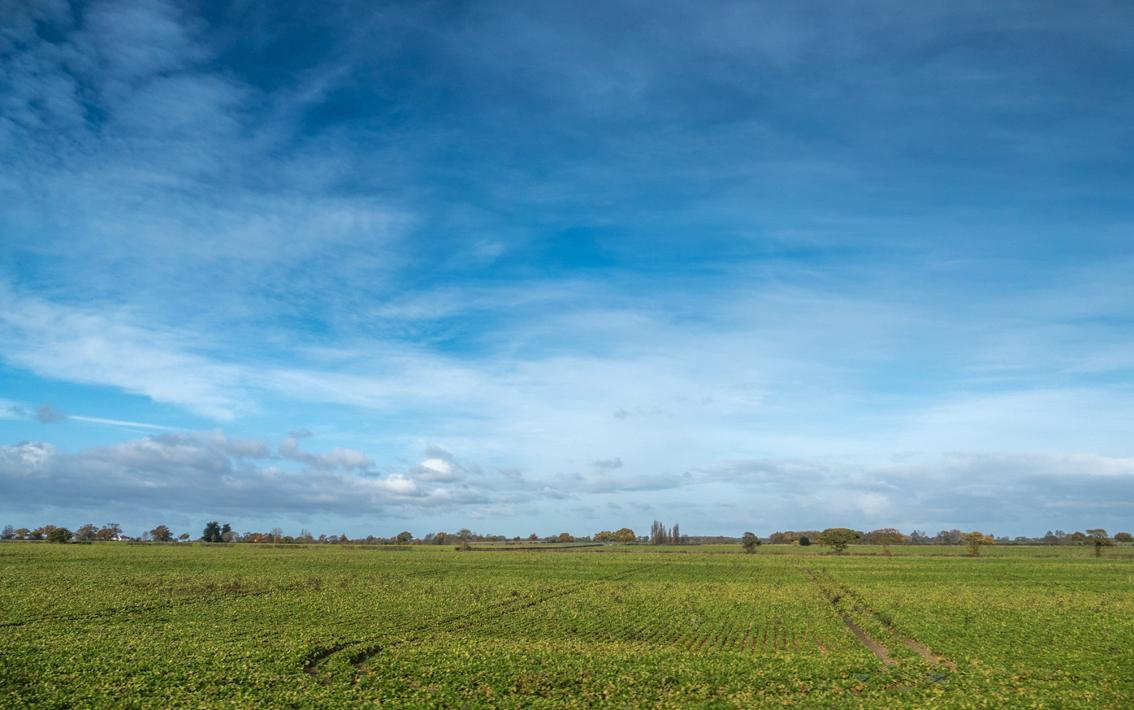 The fields on the hillslopes of Galleywood also seem to be winter wheat, and the broken cumulus offered the possibility of an interesting sunset later: 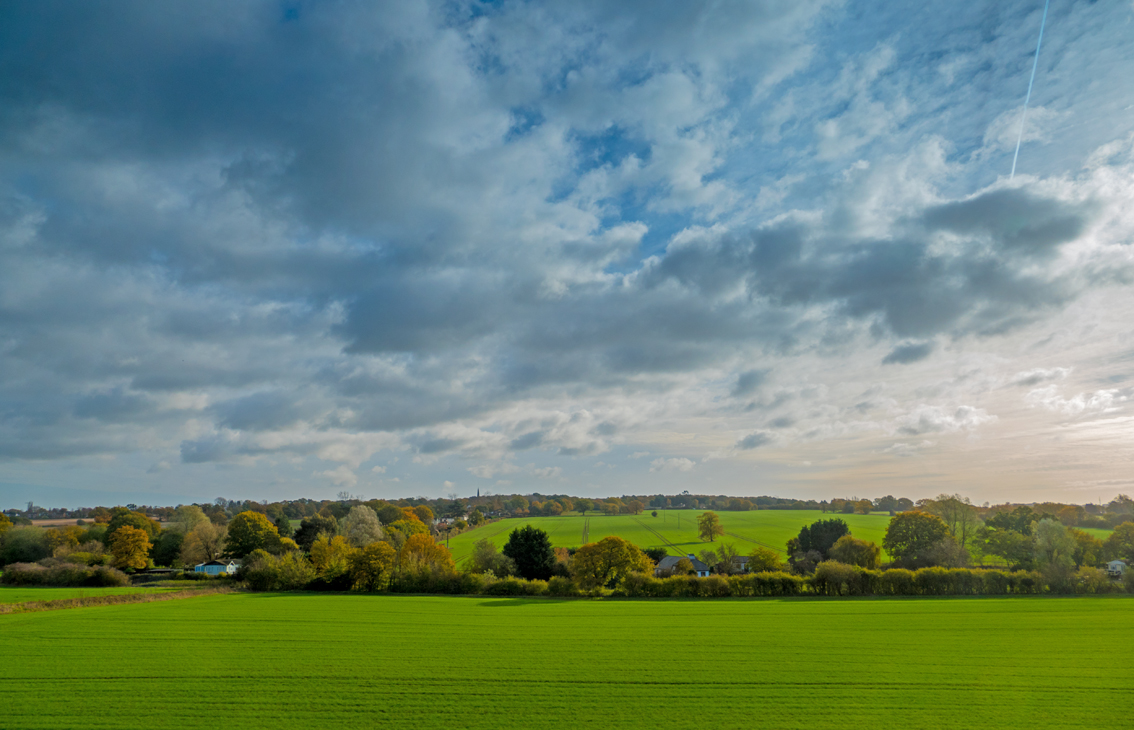 In the event, most of the cumulus drifted away to the south-east quite abruptly at the end of the day. One minute there were large banks of cumulus, the next they’d all been swept away by an extremely chilly breeze which brought mares’ tail cirrus with it: 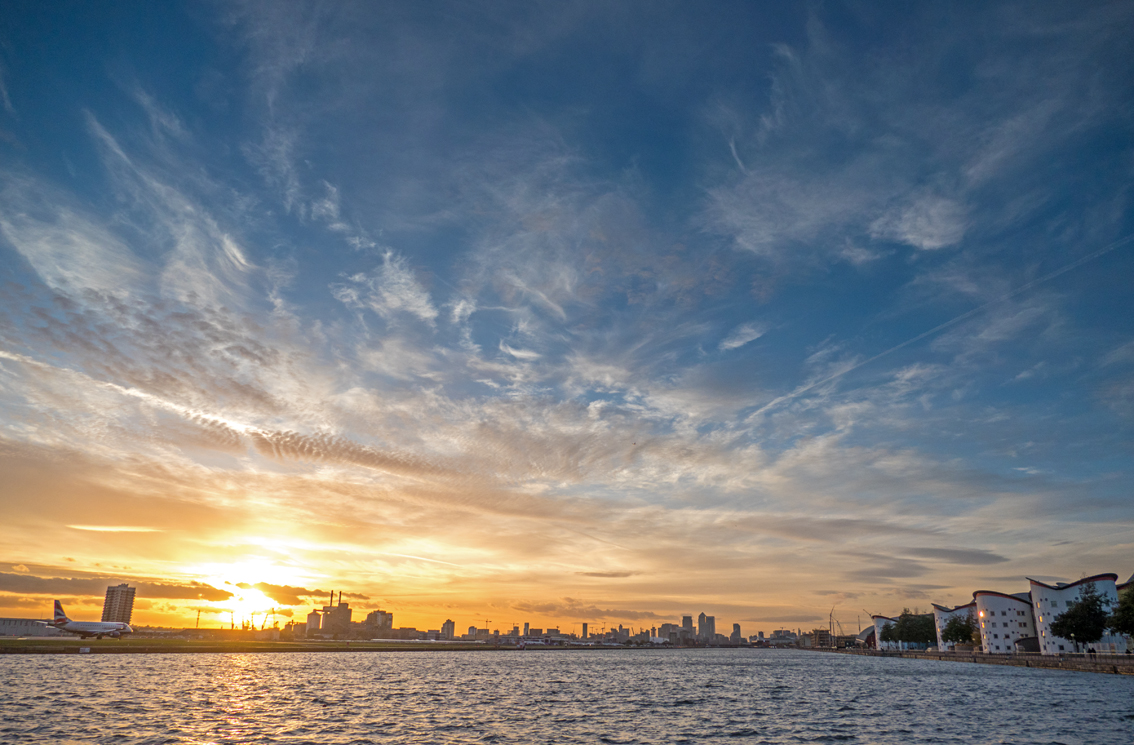 The extraordinary thing about skies is just how rapidly they change even when it looks as though absolutely nothing is happening. Different cloud formations were emerging and vanishing, to be replaced by new formations, in a matter of minutes even through a casual glance at the sky gives the impression that there is no motion at all. The following images, all taken within some 15-20 minutes of the first image, perhaps give a sense of how rapidly entire skies can change. Meanwhile the planes continued to land and take off from London City Airport, emerging from the eastern gloom to land, or leaping into the golden skies of the west over Canary Wharf, while, above them, larger planes circled before heading west to Heathrow: 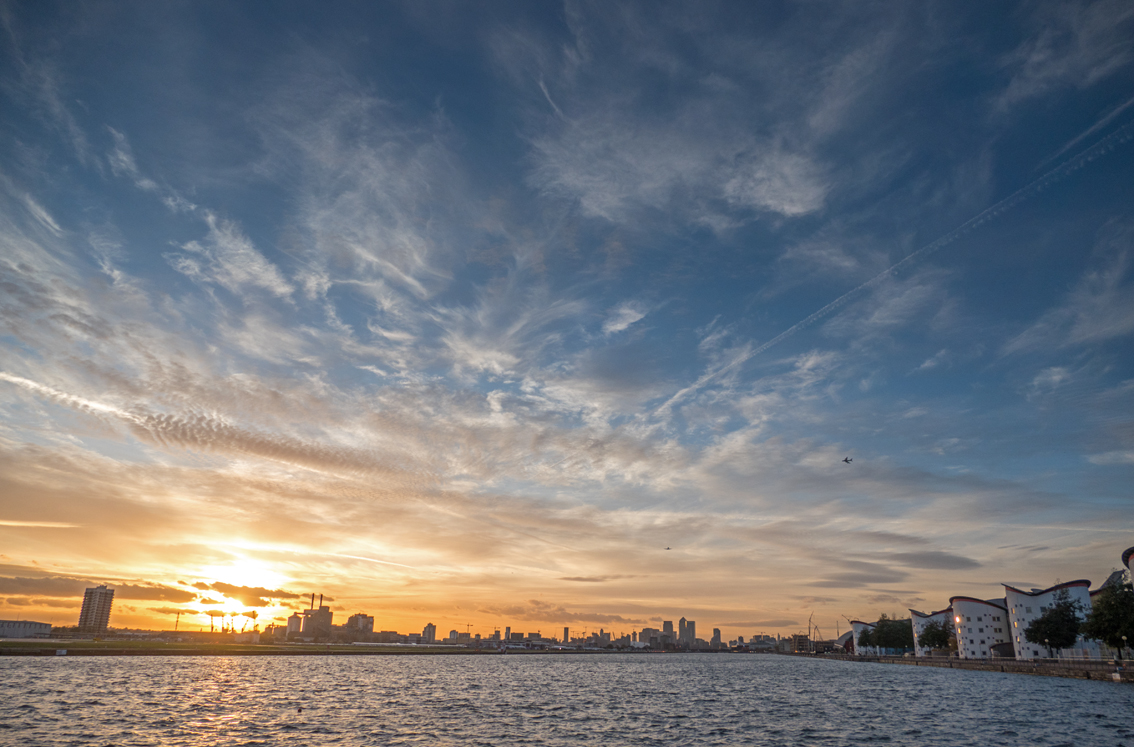 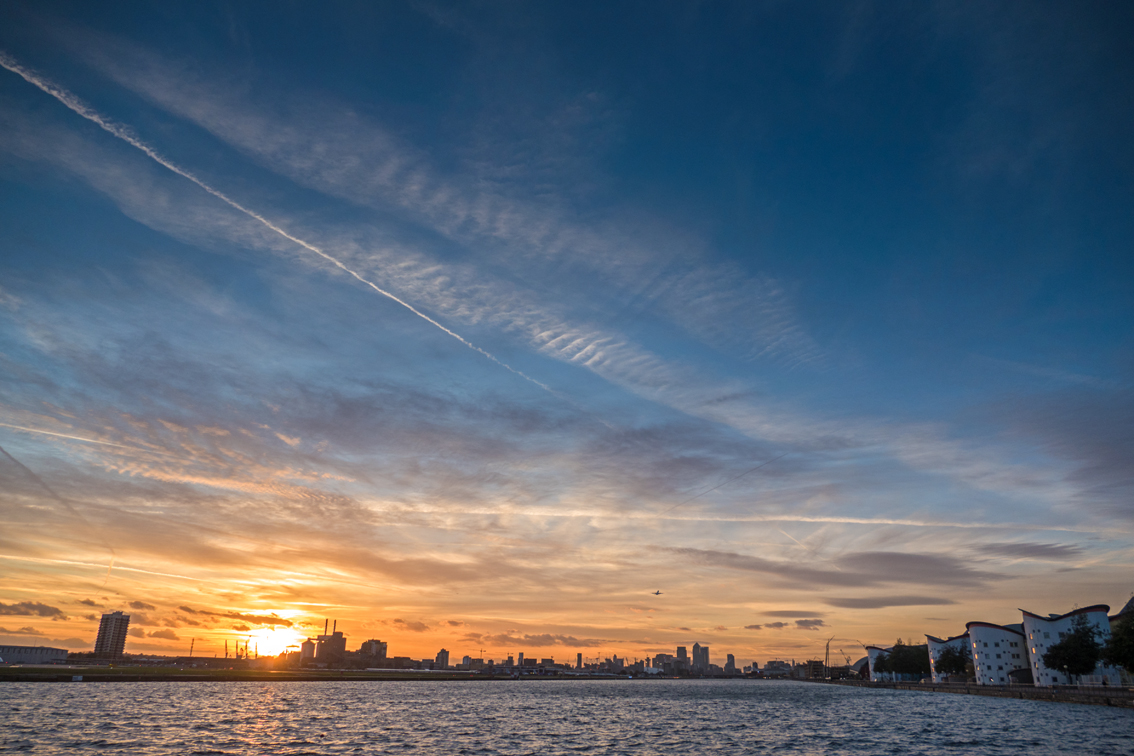 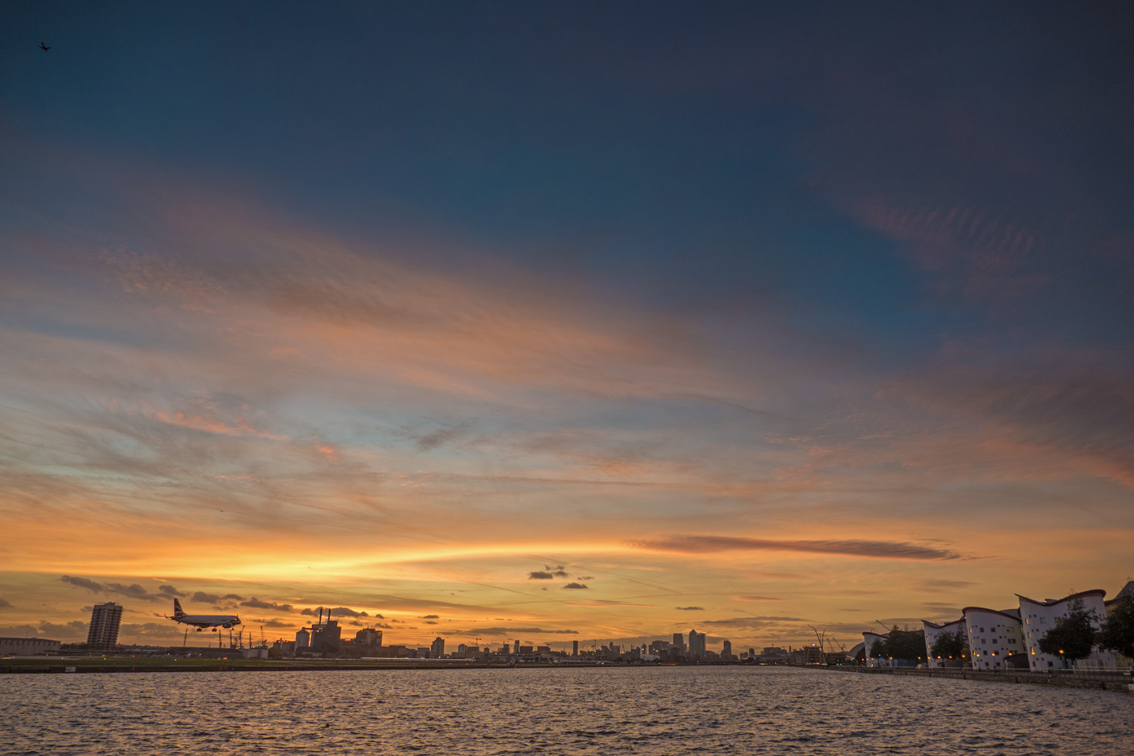 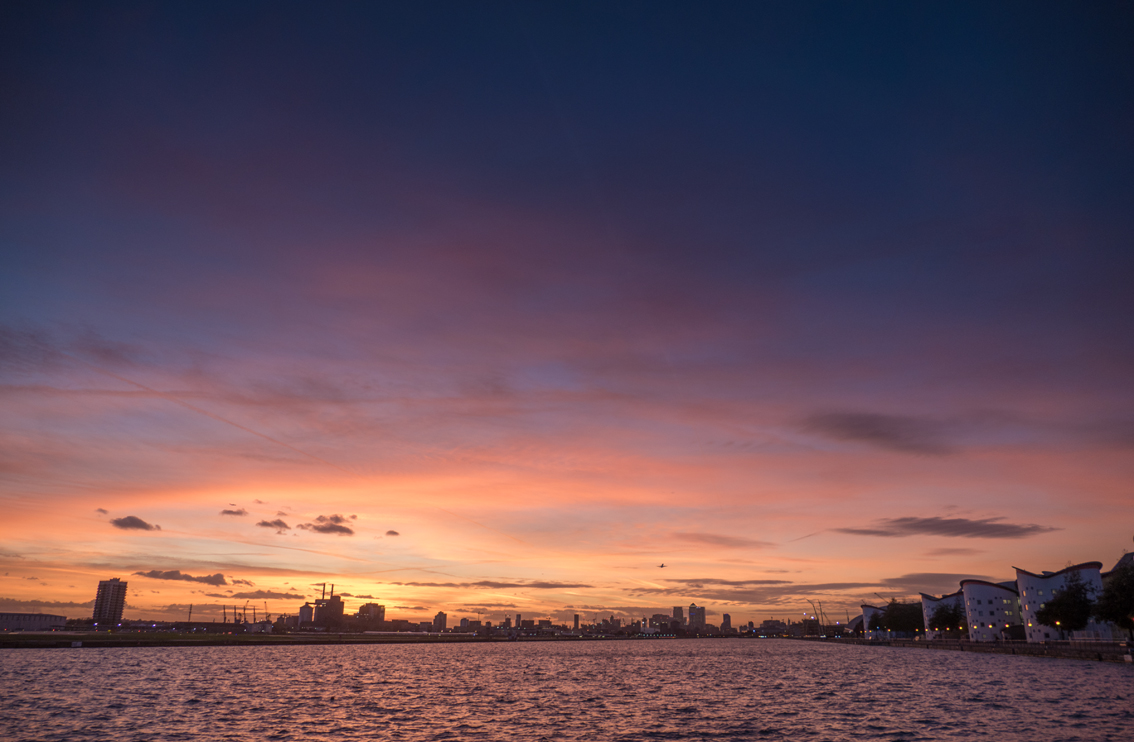 The mares’ tails didn’t lie. Much rain during the night has been followed by a grey, damp and cold Saturday morning. Apparently La Nina is promising a colder than usual winter. Dig out those winter woollies…!